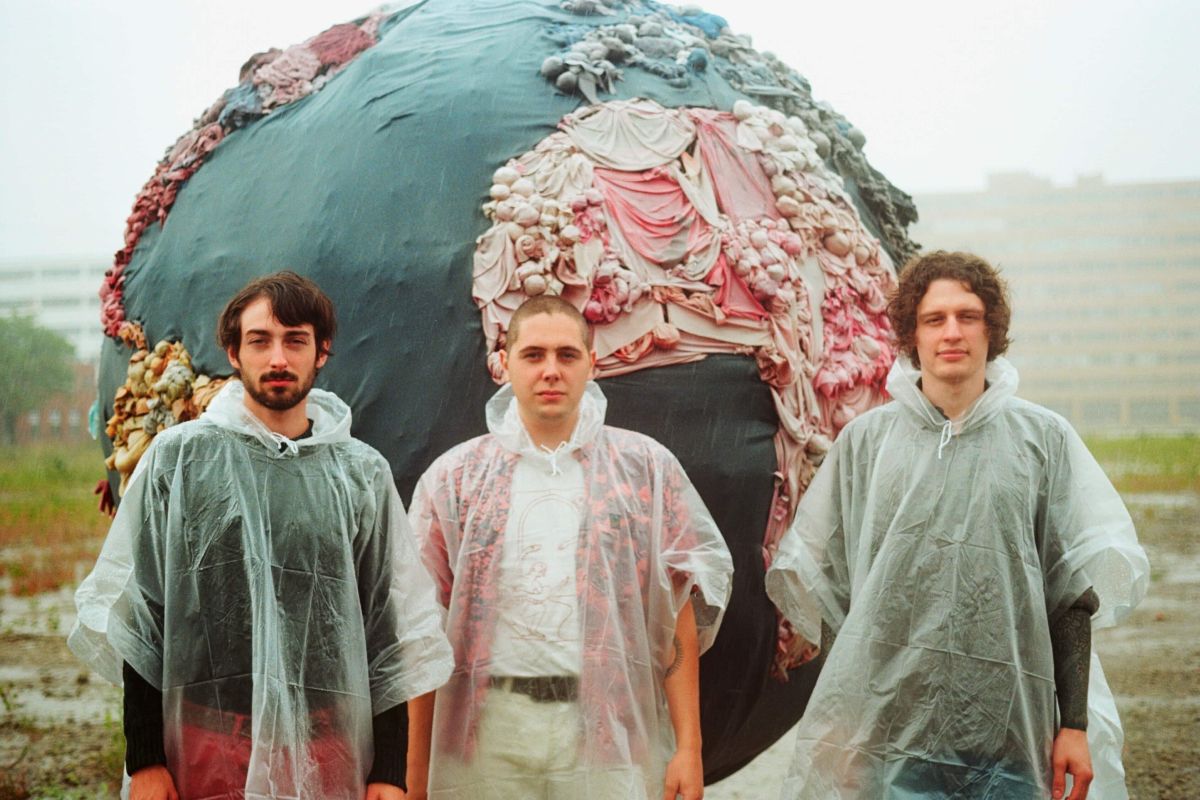 Population II among these press releases from November

Big Ideas – ‘The American Dream’: Released on YouTube as a short movie entitled ‘The American Dream,’ this short story follows a boxer training for the fight of his life. ‘As an urgent response to the current U.S. election and enormous societal challenges worldwide, BIG IDEAS member, Ben Lankester has created this short film for debut single ‘The American Dream’. The personal character study of a young, aspiring boxer, the film is a visceral, pitch-black depiction of one man’s journey through contemporary America. Violence, trampled hopes, exploitation and apathy set the metaphorical and figurative backdrop for The American Dream,’ wrote the band that features members of the Boxer Rebellion. With shimmering guitar, bright vocals, and a Springsteen-esque sax (played by Johnny Colla of Huey Lewis and the News), the music transpires hope, grief, and rebirth and is the vision of Tennessee-born Nathan Nicholson and Londoner Adam Harrison. With the help of London-based writer, director, and photographer Ben Lankester (who directed the movie), they launched the band’s 3-song debut EP exploring their instinctive responses to the current state of the world. ‘Whilst writing, we had the idea for a song that commented on two realities that exist in the world today,’ the band said. ‘’The American Dream’ embodies that drive to improve life for the individual–on the surface, easy to understand … like our song. But that short-sightedness ignores challenges that can only be solved as a collective. The dream you’re sold isn’t always the reality you end up paying for.’

Saint Bodhi – ‘Zombie’: A unique voice for a track landing between hip hop and R&B, with sharp lyrics anchored in reality and a beautiful and very green movie. The song comes from Saint Bodhi’s debut album ‘Mad World,’ released via Def Jam Recordings in October. The entire thing is delivered with strength and real-life pain while the aesthetic stays romantic in full contrast with her story. Born and raised in South Central Los Angeles, Saint Bodhi has absorbed sounds from her native Los Angeles as well as Atlanta and New York, and after being an essential piece to the behind-the-scenes of several blockbuster albums, she is making her own impact on the music world.

Ane Brun – ‘After the Great Storm’: The title track of Brun’s latest album and an immersive atmosphere haunted by her high-pitched vocals, evoking legends of the past and the cold landscape of her native country – she is Norwegian. The song, a turbulent wind building up to a powerful and beautiful cinematic vision, is part of a collection of similar tunes, the first in a series of two albums that Brun will release this fall – the second one, entitled ‘How Beauty Holds the Hand of Sorrow’ will follow on November 27. ‘I’m so excited to finally share the news about my upcoming releases,’ Brun says, ‘I’ve produced and recorded these albums mainly together with Martin Hederos and Anton Sundell… we had so many songs we loved, taped and ready, and none to throw away, so I decided to split them up into two separate experiences, into two separate albums.’‘Both albums deal with the bigger questions in life,” Brun describes, “but in 2020 these questions have become even bigger. Even though I wrote most of them before this whole pandemic started, I feel they all have a message that fits the situation we’re in: frustration over the state of the world, how to grieve for a loved one, existentialism, love, relationships, loneliness, inner struggles, sleepless nights…I guess they’re just about being human.’

Population II – “Introspection’: A bluesy fuzzy psychedelic track filled with chaos, unexpected riotous riffs, distortion, and madness that will bring to mind any thing from the Oh Sees’ epic jams – although I think they call themselves the Osees now. This song is a monster, a mutant that keeps on giving, a saturation of ferocious sounds with a sax scorching over the loudness. This is the first song off Montreal-based rock trio Population II’s debut album ‘À La Ô Terre’ (yes it’s in French) via Castle Face Records (of course). John Dwyer had quite the words to introduce them: ‘Blazing through the stratosphere. Boiling up from beneath the sea. Hanging in the air like smoke. These elemental tunes drift and fluctuate, at one with the air, over extreme heat. Population II has beamed out of Quebec with a mind-melting debut of hard psych freckled with a punk sentiment. Both old school and timeless. These young humans rip. They are impressive in their live actions and this album captures this raw energy on wax. Produced by Manu from the great band Chocolat. A very high bar has been set, indeed. Fluid, tough, and over-saturated, this album is bound to please fans of the label and new-comers alike, reminiscent of Amon Duul, early Pink Floyd, Kollektiv, Laurence Vanay, Les Olivensteins, early Kraftwerk, even a touch of the Kinks.’

Kennedy Stephens – ‘Black Will See Praises’: A solemn and brave song delivered with confidence and conviction over bright keys and echoes of gospel choirs. This is Kennedy Stephens’ tribute to Breonna Taylor that has earned the support of Gayle King, Tiffany Haddish, Jamie Foxx, Diddy, Naomi Campbell, Snoop Dogg, Lala Anthony, and many more since its arrival on Instagram in September. The song is now available across all platforms via Def Jam Recordings, and a contribution will be made to the Social Change Fund, an organization created by Chris Paul, Dwayne Wayde, and Carmelo Anthony, to support critical and timely issues impacting the black community. ‘I’m scared for my life/ One moment I’m sleep my bed with nothing to lose/ One second later I’m feeling my wounds/ The world will never be the same, because people are fighting for change/ And Black lives will see praise,’ sings Kennedy Stephens. After the killing of Breonna Taylor in her apartment bedroom on March 13, Kennedy became concerned about ‘how the continuous loop of Black bodies and death becomes over­whelming.’ ‘Like most of us out there, it was starting to get to me. So instead of getting discouraged, I decided to create. This is my tribute to Breonna Taylor. I hope you enjoy and Rest in Power to everyone we lost this year.’

Zombie Americana – ‘Zombies’: A loud fuzz rap/pop song delivered with a Beastie Boys spirit, alternating with hooky pop chorus, while the song morphs into something else towards. The rock opera vibe should not be a surprise since this is a song from Zombie Americana’s debut LP, ‘a rock opera set to the tone of a country on the brink of a societal collapse.’  ‘It was just us two in a room, alone, just thinking with our hearts and our feelings rather than with our heads on what’s going to fit or what’s going to make sense for both our projects,’ singer-songwriter Bryce Fox and songwriter-producer Ross Ryan declared. The influences are all over the place, from 90s boom-bap hip-hop to punk-rock riffs and piano ballad moments. ‘Upon listening to the work again almost a year later, it just made so much sense to us, so we coined a name and came up with an aesthetic, which didn’t take much effort as it was all laid out in the lyrics for us,’ both men added.

Emi Wes – ‘Cry Baby’: Ultra sweet vocals for a nostalgic and romantic tune written by Danish new sensation, Emi Wes. Thanks to her airy vocals, the song blends a girl group vibe over vintage instrumentation but a very modern R&B. ‘I write songs because I need it. Nothing spectacular about that. I need to turn the bad into good. I never think about what a good song would be. ‘Cry Baby’ were just things I needed to say but couldn’t to the person, at the time,’ notes Wes. ‘Cry Baby’ was produced by four-time Grammy-nominated producer and writer, Robin Hannibal, who’s best known for his work with Rhye, Quadron, Little Dragon, and Kendrick Lamar, and will be featured on Wes’ debut EP, ‘Departure,’ due on November 13. It also comes with an intimate video.