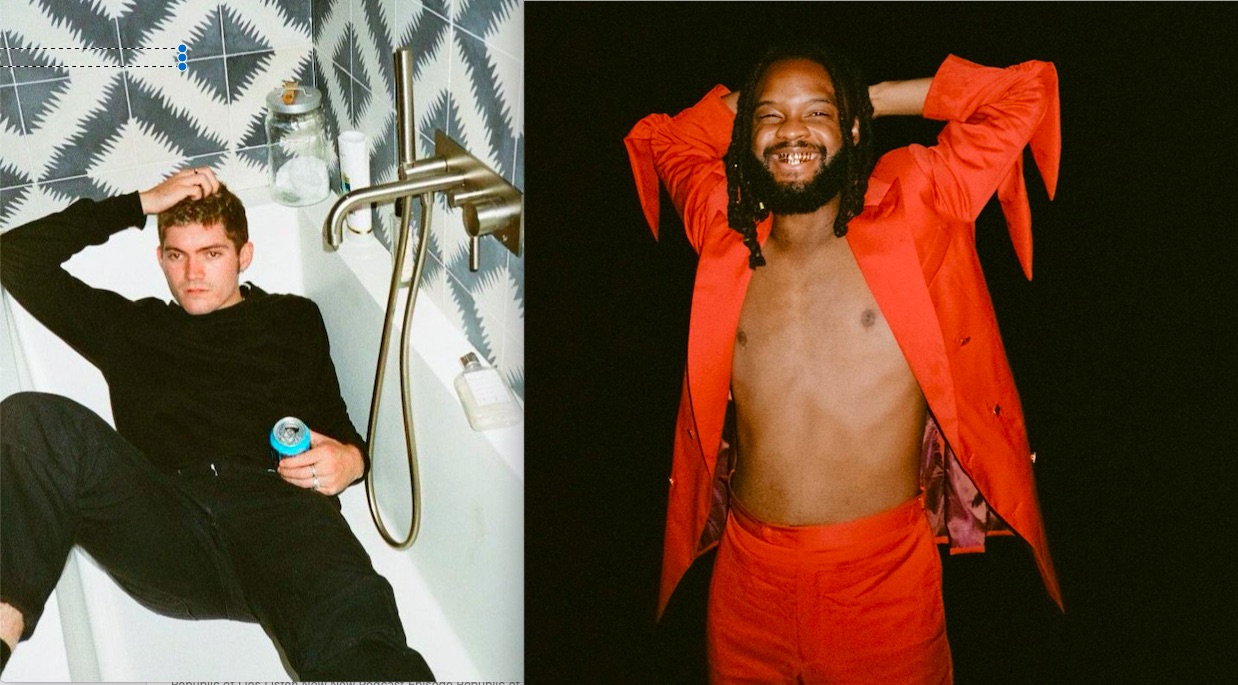 GUM, 5 Billion In Diamonds, Brooks Hudgins, Romero, Genesis Owusu plus covers of two famous songs are among these press releases from November,

GUM – ‘Low To Low’: A percussive Brazilian carnival seen through a psychedelic kaleidoscope with dreamy vocals, horns, and an overall upbeat vibe for the sunny video accompanying the song. ’Low to Low’ comes from GUM’s fifth studio album ‘Out in the World’ released via Spinning Top Records. ‘I purchased an EHX DRM15 drum machine and the song developed from one of the preset beats, this ‘robot-Latin vibe with lots of spring reverb. It was the last song I recorded for the album, it’s bizarre stylistically, but I just went with it,’ says Jay Watson aka GUM of the track. Shot in Fremantle with POND co-conspirator Jamie Terry, the video captures the warmth of the distinctly Australian landscape. ‘My mate Az gave me 16 panels of Perspex he had found, who knows where? GUM thinks outside (and inside) the box,’ says Watson of the video. ’Now that the dust has settled on Out In The World, I think this is probably my favorite track from the album, and I know it is for lots of other people too, so I wanted to make a visual for it.’

5 Billion In Diamonds –‘Weight of The World’: A melodic and hooky track with the feel of a well-rounded ‘80s pop song. A song for a ride with your car’s windows down, despite the very abstract video. 5 Billion in Diamonds consists of the legendary producer trio of Butch Vig, Andy Jenks, and DJ James Grillo and they are releasing a new LP ‘Divine Accidents’ today via Make Recor, the follow up to their self-titled 2017 debut. The new album uses a stellar cast of collaborators including singers Ebbot Lundberg (The Soundtrack of Our Lives, Union Carbide Productions), David Schelzel (The Ocean Blue), Bristolian chanteuse Helen White, and musicians including the ‘Bristol Wrecking Crew’ of Alex Lee, Sean Cook and Damon Reece on guitars, bass, and drums, as well as contributions from James Bagshaw of British psych-rockers Temples and gorgeous vocals from Martin Barnard from Jenks’ 90s combo Alpha.

Brooks Hudgins – ‘February’: A cinematic and atmospheric track with jazzy influences and a raucous voice at the verge of breaking down, that delivers a half-spoken drama about the end of a relationship. This is a new song by Brooklyn-based multi-instrumentalist Brooks Hudgins off his debut album ‘Drive Thru Communion,’ due out December 11th. Described as an alt-country album with flashes of brilliance and maimed by a lot of head-scratching inconsistencies. The 13 tracks were recorded in various studios and bedroom closets across the US and promise a dark peculiarity characteristic of the little that we have heard from Brooks.

Sun Kin – ‘Blue Light (Keeps Me Up at Night)’: A dynamic and high-energy all-synth dancefloor with a very funky vibe, dreamy vocals, and tropical beats. The track comes off musician Sun Kin’s upcoming LP, ‘After the House,’ out February 12. ‘’Blue Light (Keeps Me Up at Night)’ was inspired by Sade, Blood Orange, Peggy Guo, and Nile Rodgers (Chic), as well as by endless YouTube playlists of acid and deep house, much of which sounds like it could have been made at any point in the past 40 years. The tone is yearning but playful, light but also deep, with propulsive, hopeful energy contrasting the melancholy of the melodies,’ Sun Kin says. Born in Bombay, India, and raised in five different countries, producer Kabir Kumar aka Sun Kin is now based in Los Angeles.

Justin Nozuka & Mahalia – ‘No One But You’: a very sweet and sensual R&B-inspired song, a languid-saccharine duo with lush keys and gentle guitar, illustrated by an intimate video. Acclaimed Canadian artist, Justin Nozuka is making his long-awaited return with the release of this new single that he recorded in collaboration with Brit Award-nominated and BBC Sound Poll-tipped UK artist, Mahalia. Shifting from the folk-minded approach of his previous album, ‘Run to Waters,’ he enters a world of warm, analog R&B and down-tempo soul. Nozuka says of the track ‘Feeling pretty emotional that it’s finally out there. This song is a special song for me. Don’t know, I just have a really special connection to this one. It’s a song about my real experiences, and I can place it at a specific time and place. And to share it with Mahalia just really brings it home. The way she sings on it- truth, beauty, and love in her voice.’

Romero – ‘Troublemaker’: A charging track screaming rock & roll with a large dose of power pop carried by frontwoman Alanna Oliver’s distorted and soulful vocals. Mastered by Mikey Young (Total Control, Eddy Current Suppression Ring) and mixed by Andrew Hehir, this sounds a bit like some glorious punk, glam, and pop song of ‘70s-‘80s, and strokes both classic and modern age pop records, while evoking an emotional response of the brill-building soundscapes of mid-century soul and groove. As our collective news fatigue lingers and the frustrations of daily living continue to amplify, Romero’s new single ’Troublemaker’ helps smooth out the bumps and reassures us on our existential path ahead.

Joe Wong & Mary Timony – ‘Every Man Has a Woman Who Loves Him’: This is obviously a Yoko Ono cover, recorded on the 40th anniversary of John Lennon’s final album ‘Double Fantasy.’ The song is executed with depth, plenty of interesting sonic details, and a symphonic production which gives a new dimension to the song. It features the charming vocals of Mary Timony (Ex Hex, Wild Flag, Helium) and was mixed by Flaming Lips producer Dave Fridmann. Known for his popular podcast, The Trap Set, which is nearing its 300th episode and has featured a broad array of guests from Sheila E and Phil Collins to Fred Armisen and Sharon Van Etten, Joe Wong recently released his celebrated debut album ‘Nite Creatures’ via Decca Records. He talks about this love for the song: ‘The song has always felt haunting and profound to me, and is an under-appreciated song in the Ono/Lennon oeuvre. Although the song was recorded during the week of Lennon’s 80th birthday [last month], the track continues to inhabit my dreams, and that’s a good thing. Not enough people talk about what an incredible singer Yoko is, and interpreting her song was a formidable challenge. It was a thrill to explore Andy Newmark’s subtly polyrhythmic drum part and Tony Levin’s bass genius, from the time when it was restricted to a mere four strings.’

Noël Wells – ‘Lovely Day’: Another surprising cover, a remake of the famous Bill Withers’ incomparable classic ‘Lovely Day,’ reworked as a glitter disco dancefloor with ingenue’s vocals. Produced by David Thomas Jones, Wells’ cover of the iconic R&B/soul song was born out of a vision of the world dancing, along with a much-needed global exhale. ‘During this whole political season, I’ve been watching people’s roller skating videos on Instagram as a way of getting a little serotonin bump,’ Wells says. ’I wanted the track to feel like a glitter disco, something you can dance and skate to and feel really free.’ She manages to bring this exact feeling with emotion and sincerity. ‘I just love the message of the song,’ she continues. ‘It’s pure love, and no matter what ‘out there’ might get you down, if you have someone you love and your friends and the things that matter around you, you can tune out that noise.’

khai dreams – ‘Good Advice’: Another dreamy song with a very melodic and feel-good vibe graduating from lo-fi bedroom pop, and blending surf rock, R&B, modern indie, and a few hip-hop influences. Khai dreams is a 21-year-old, half-Vietnamese singer, songwriter, and producer born and raised in the Pacific Northwest, and for someone based in rainy Eugene, Oregon, he has quite a sunny-beachy sound. ‘Good Advice is his first new single of 2020, alongside a video animated by Joseph Melhuish. ‘I’ve always loved animation and I thought Joe’s style in animation and design was so unique,’ khai says. ‘I love the textures in his art, and how he plays with proportions and perspective to make everything even more surreal and crazy feeling. The colors are so vivid too, it makes everything really fun to just look at!’

Genesis Owusu – ‘The Other Black Dog’: A strange, and menacing track working accompanied by an intriguing and chaotic video. The Ghanian-born, Australia-based artist has a great ability for storytelling while this new song seems to evoke both inner and outer demons he lives with. The song doesn’t sound like anything else heard before, it confounds genre while the video is a strange dance building intensity to a heady climax before an abrupt shift welcomes a rich, soulful breakdown. Owusu says of the single: ’The track explores the internal struggle between a hopeful spirit of endurance and a gnashing black hole of ugliness. One is me, and the other is also me.’ His debut album ‘Smiling with No Teeth’ is out March 5, 2021, via House Anxiety/Ourness.