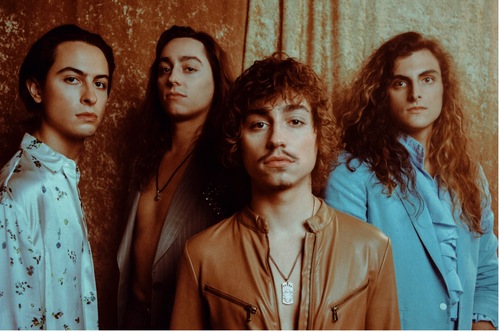 Great Van Fleet among these press releases from March

Hot Knives – ‘Static Bloom’: Big drums and loud guitars build an epic stadium-ready booming start for a high-energy track flirting with hard rock, metal, and ‘70s rock. The vocals are high above this absolute scorcher which doesn’t forget the melody. This is the lead single for Hot Knives’ upcoming album ‘Making Love To Make Music To Make Love To,’ which promises the beauty and voraciousness of rock and roll while pushing into uncharted sonic territories. The legend says that, following a mystical experience that opened a channel of communication with the rock gods themselves, Hot Knives was tapped by the ghost of Jimi Hendrix to bear the torch of rock and roll. A song like ‘Static Bloom ‘surfaced through near-telepathic, focused collaborative writing. ‘Making Love To Make Music To Make Love To’ is due out May 7th.

Great Van Fleet – ‘Heat Above’: The organ is joined by guitars and drums and as soon as the high octave vocals kick in, the Led Zeppelin vibe is strong for a vintage-like track that sounds like an over-the-top classic. ‘’Heat Above’ is theatrical, eloquent, and exaggerated,’ explains the group. ‘This is a dream in the clouds, a moment of peace in the storm. Thematically, we are dead center in the cult of Heaven, surreal, strange, alive and free.’ The video that accompanies the song could be called heavenly and the track comes from Great Van Fleet’s highly anticipated sophomore LP ‘The Battle at Garden’s Gate,’ due April 16 via Lava/Republic. The album reflects heavily on the group’s personal and spiritual growth, as well as deepening empathy for the struggles and inequalities others are experiencing. ‘We realized that while growing up, we had been shielded by many things,’ describes drummer Danny Wagner. ‘As we started to travel a lot, meet new and different people and experience different cultures, our definition of ‘normal’ changed.’ Bassist Sam Kiszka adds, ‘I suppose that everything has changed except what got us here in the first place…our perception of the world, perception of life itself, what it means to be an artist, what it means to be part of a beautiful, gorgeous society. We’ve gained a larger understanding of why we’re all here.’ ‘There was a lot of self-evolution happening during the writing of this album that was prompted by experiences I had, experiences we all had,’ explains vocalist Josh Kiszka. ‘It’s reflecting a lot of the world that we’ve seen, and I think that it’s reflecting a lot of personal truth,” says guitarist Jake Kiszka. ‘Certainly, after this, we’ve grown in so many ways,’ Josh explains. ‘This album has taught us a lot, about life in general, about ourselves, about all of us, about the world we live in.’

Glaare – ‘Young Hell’: A mysterious industrial-inspired track with dreamy, yearning, ethereal vocals. The track fits into the darkwave/post-punk sound, with a melancholy mood, lush dream pop elements, 80’s-ish electronica, and very disturbing imagery (watch the video). Glaare will return with their sophomore full-length album ‘Your Hellbound Heart’ out April 30 via Weyrd Son Records. ‘Your Hellbound Heart,’ just like the book it’s named after, is the embodiment of pleasure granted to someone after a time of extreme torture. Its relation to the 80s classic movie Hellraiser, as well as countless other nostalgic stories involving familiar metaphors of life journeys, is most certainly not by accident either. ‘Don’t be fooled by its synth-heavy dance introduction. Behind the relentless party your face off, drive faster ‘till you crash tracks is anything but a story about a good time.’

Zenith Volt – ‘Hold On’: The track starts off as an electronic burst of energy, and continues with propelling beats, buzzing synths intertwined with a colorful and dystopian universe. This is one of the 2 singles from the upcoming debut LP of Hawaii-based synthwave project Zenith Volt – the other single is ‘Supercomputer.’ Zenith Volt explains, ‘I am so inspired by the thought that at this very moment in time, our heels are stepping out of a past to be left forever in exchange for an unwritten future.’ The album ‘TIMEKEEPER’ holds an amalgam of this heaviness and hope throughout. It has a heavy retro/futuristic synthesizer tone, and arpeggiating pulse. ‘TIMEKEEPER’ is out March 19th on Aztec Records.

Genesis Owusu – ‘Gold Chains’: A crunchy funk-rap number incorporating a bit of Prince and beyond. It resists being categorized with its mix of confidence, swagger, and humor wrapped in a jazzy, funky hip-hop delivery, and an earworm for the chorus. Watch the video. ‘Gold Chains’ comes from Genesis Owusu’s recent release ‘Smiling With No Teeth’ released on March 5 by influential tastemaker imprint House Anxiety and Australian label Ourness. Genesis Owusu’s work has been described as boundary-pushing. an avant-garde twist on R&B, hip-hop, and future-funk, blending and dancing around a melting pot of dynamic layers. ‘Smiling With No Teeth’ is a 15-track collection that carousels the Australian prodigy’s shockwave of energy, as he blurs the boundaries of genre. Meanwhile, the album deals with complex issues such as race and mental health, under a rollercoaster of oscillating soundscapes. Each chapter is a personal testimony and reflection upon such issues, slathered in Owusu’s chameleon-like presence while not shying away from the harsh realities at the core of the album.

Kat Edmonson – ‘If You’re Scared’: A delicate and folksy tune sang with sweet and nasal vocals backup by angelic harmonies. This is the debut song of vintage pop vocalist and songwriter Kat Edmonson. The bewitching song was specially written for NPR Morning Edition’s Song Project, which calls on artists to write an original song inspired by this unique moment in American history, touching on themes of the ongoing COVID pandemic and other prominent current events. ‘I was listening to the warm sounds of James Taylor and Bill Withers when I wrote this. I was thinking of Carole King’s, ‘You’ve Got a Friend,’’ Edmonson explains, ‘My mom was in Texas, alone in the hospital, and without power from the winter storm. I began working on ‘If You’re Scared’ as a means of comfort for her.’ The music has been described as ‘an alternate soundtrack to an Audrey Hepburn film,’ or ‘fresh as a spring bouquet’ and there is certainly this immediate magic when you listen to ‘If You’re Scared.’

Marion Raw – ‘Deportee’: A very fragile and beautiful track with an early Angel Olsen vibe. Marion Raw’s voice shines with strength, vulnerability, and real poignancy. This comes from Marion Raw’s debut solo album, ‘Deep Cuts,’ a collection of covers and original recordings, self-recorded during months of isolation, set up for a release on April 9. Marion Raw explains: ‘While the entire world is having its own surge in protests and movements calling to equal rights and a growing awareness of gender violence and the objectification of women, Mexico’s struggle is heightened due to the current president’s aloofness, which plays off an already extremely chauvinistic society and culture where women and girls are being murdered in at an alarming rate. I am very proud to be part of this compilation with like-minded and brilliant female artists, that I personally admire and hold in high esteem.’

Porter Robinson – ‘Musician’: A playful, high-energy high-voltage song by acclaimed vocalist, songwriter, and producer Porter Robinson. This joyful track comes from a new LP ‘Nurture’, Robinson’s first album in seven years, out April 23 via Mom+Pop. ‘’Musician’ was one of the very last songs written for Nurture. The song is meant to feel like a celebration like I’m reveling in the joy of newfound inspiration,’ Porter says. ‘If the rest of Nurture is about me trying to find hope for the future, ‘Musician’ is like a celebration of that hope materializing. It was one of the last songs that I wrote for the album, and it’s honestly a celebration of the album itself. That’s where the title comes from. It’s like, ‘Alright, I’ve found my footing, and I know I can really do this now.’ And I just tried to throw all of my rules away and have as much fun as possible. Ironically enough, this is the least sad song on the album, but this is the song that makes me cry. It’s the fun one. I just sound so happy on that song.’

Imelda May – ‘Made to Love’: A confident and energetic song with a giant hook that sounds completely familiar at the first listening. It is a celebration of love and something to run away with anyone you love. ‘I wrote this song from the perspective of Love itself as a living thing and how much it has suffered for simply being. It frightens some with the power of its simplicity, purity, truth, and breathtaking beauty. It puts a mirror to us and only through it can we see our true ourselves,’ Imelda May says of her inspiration behind the track. ‘I believe in Love. I believe in fighting for Love. I believe that we are made to Love.’ The song is from her highly anticipated new album, ‘11 Past the Hour,’ out April 23, which finds her working with collaborators such as Ronnie Wood, Noel Gallagher, Miles Kane, with contributions from feminist thinkers and activists such as Gina Martin and Dr. Shola Mos-Shogbamimu, written with co-producer Tim Bran (London Grammar, Primal Scream,) and string arranger Davide Rossi (Coldplay, U2, Goldfrapp).

Joshua Henry – ‘Guarantee’: A soul-funk track served by a strong and versatile voice jumping from genre to genre with ease and a real joy. This is the titled track of the debut EP by neo-soul musician and Tony-nominated performer Joshua Henry. Produced by close collaborator Theron ‘Neff-U’ Feemster (Michael Jackson, Dr. Dre, Justin Bieber, Doja Cat), the EP showcases Joshua’s immaculately powerful voice and his intelligent storytelling background, brilliantly pairing themes of vulnerability, love, and hope born out of the pandemic. ‘This EP is full of my heart, but I also want people to jump and groove to it, to feel it cerebrally, spiritually, and bodily,’ Henry notes. ‘There was a blank canvas that took me back to when I was seven years old, just writing from my heart, with nothing to lose.’ ‘Guarantee’ was released via S-Curve Records/BMG.