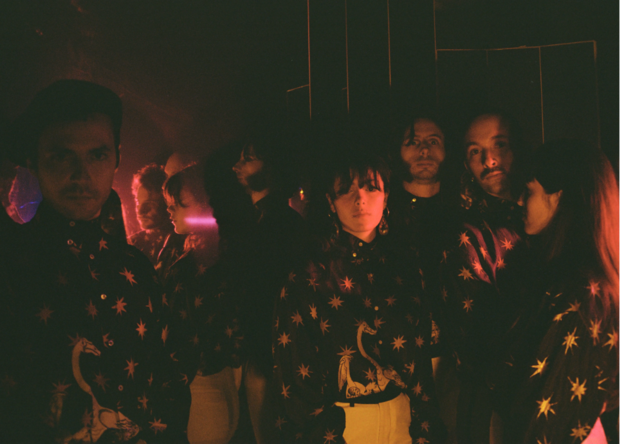 La Femme is among the press releases from March (photo credit: Oriane Robaldo)

Lake Street Dive – ‘Hypotheticals’: The lead single of the band’s new album ‘Obviously’ has a jazz-pop vibe and Rachael Price’s great vocals. The song has a strong hook, plenty of sophistication, and it blends multi influences of retro jazz and R&B styles into a light uplift and an effortless rendition. ‘Obviously’ was produced by Grammy Award-winning producer, songwriter, and multi-instrumentalist Mike Elizondo (Fiona Apple, Mary J. Blige, Carrie Underwood, and 21 Pilots, among many others) and is out via Nonesuch Records.

Ashlynn Malia – ‘open’: Some ethereal and emotive vocals over a delicate acoustic guitar soon growing into a pretty but spacious electronic soundscape. This is the new single off her upcoming EP ‘rather be alone’ out this summer Via Jullian Records/The Orchard. ‘Funny enough, I wrote this song when one of my friends took too long to text me back. I always say that songwriting is my time to be a drama queen since I’m pretty chill and non-confrontational in real life. But I guess that night, that small thing just sent me spiraling, and every other insecurity I had about that relationship came to the surface and filled the temporary silence on the other line. ‘open’ is a song ultimately about fear. Fear of opening up and letting somebody else into your world, and then fear of the consequences that could arise after judgment, rejection, and abandonment. I’ve spent so long convincing myself that if I let someone get too close to me, the real me (not me I think they want me to be), then they will lose interest, and it will hurt a lot more to let my truest self-face that rejection instead of the metaphorical mask I wear.  I wrote open using a chord progression that had been tossed to the side during a writing session I’d had earlier that day. My writing process usually starts with just me and one instrument, and then I take it to my producers and we build from there,’

Ellise  – ‘Feeling Something Bad today’:  Helium vocals moving to impressive confidence, Ellise delivers pop drama with a Britney Spears-like sexiness and a dark twist. This is the second cut from breaking pop star Ellise’s upcoming debut album, out later this spring, and it comes with an eerie video, directed by Joakim Carlsson (Duke Dumont, Grace VanderWaal). ‘I just love dramatizing little everyday feelings in life, so this is my big dramatic ‘I have a crush on you’ song,’ says Ellise, noting that she wrote ‘Feeling Something Bad’ about a boy she barely knew. ‘The day I made it, I felt like I had a breakthrough with how I make music. It was so different from anything I had made before, and it really pushed me to keep challenging myself throughout the making of the rest of my album.’

Alewya, Moses Boyd – ‘The Code’: A Lugubrious and mysterious beginning for this interesting and very groovy R&B collaboration between producer, singer-songwriter visual artist Alewya and multi-award winning drummer, producer, and composer Moses Boyd. Moses says on the collaboration ‘My favorite moments in the studio are those when the flow is seamless and doesn’t need to be explained. We made ‘The Code’ within minutes of jamming together and it was just that, seamless. I knew we would have great musical chemistry and it’s been refreshing to work with someone as open, brave, and inquisitive as Alewya. I know she has so much more great music to come.’ ’This track came so naturally,’ Alewya adds. ‘Moses has a way of understanding musical language and weeding it out of you – I was truly grateful for it. The Code is essentially a song sung by the observer in me Observing the shadow of me. Captures what we as a collective and individually are going through – an intensely dark night of the soul.’ Watch their live performance here, ‘The Code is out today via Because London Records.

Lydia Ainsworth – ‘Parade’: A wide-eyed pop song with a luminous and uplifting quality and a dreamy vibe thanks to electronic soundscapes and a cartoonish video. This is the new single from the upcoming album of composer and producer Lydia Ainsworth. ‘Longing seems to be a major theme running through my songs on this album,’ says Ainsworth. ‘Whether that is a longing in love, longing to be free from oppression, or longing for the muse of inspiration to make an appearance. I have included some spells and charms in there as well that have proven effective if any of my listeners want to use them for help with their own desires.’ The album also marks a departure from the more solitary creative process that her previous releases were born from. Ainsworth recorded all her vocals at her engineer/mixer Dajaun Martineau’s studio in Toronto. Mark Kelso provided live drums and Neil Chapman and John Findlay added electric guitar and bass in the city’s Desert Fish and Noble St. studios. These live elements blend with Ainsworth’s own samples, programming, and voice to create the record’s sonic tapestry. Sparkles & Debris is out on May 21 via Zombie Cat Records.

Aya Nakamura – ‘Fly’: A song by French-Malian superstar Aya Nakamura filmed under the iconic stained-glass dome of Paris’ Galeries Lafayette, and directed by David Ctiborsky. Aya’s flexible voice shifts through different tones of softness and confidence. The most-listened-to Francophone singer in the world, she has been called ‘one of the most important acts in Europe now, musically and socially’ by The New York Times. ‘Fly’ comes from her recent album simply called ‘AYA’ and featuring British rap stars Stormzy and Ms Banks as well as rising French-Malagasy artist OBOY. The album is now Platinum-certified in France, having earned over 700 million streams globally. her 2018 album ‘NAKAMURA’ has surpassed one million album sales worldwide and 3.5 billion streams globally, bridging Europe, Africa, Latin America, and most recently Asia. Aya blends the use of Parisian argot, Arabic and Bambara, the Malian language of her parents, as well as bringing a fresh take on Afrobeat, Pop, R&B, and the Caribbean dance sounds of Zouk. The record earned Aya ten certified singles, propelled by the French #1 hits ‘Djadja,’ which has reached more than 1 billion streams and became this past fall the most-streamed French-language song of all time on Spotify, and the recent viral TikTok hit ‘Copines.’

La Femme – ‘Le Sang De Mon Prochain’: A dark, romantic gypsy-esque song by critically-acclaimed French band La Femme, accompanied by a funny vampire-themed video directed by Ilan Zerrouki. ‘Je suce le sang de mon prochain’ (I suck the blood of my neighbor) comes from their upcoming album ‘Paradigmes’, out April 2 via Disque Pointu/IDOL. This is actually the 5th track they are sharing, after ‘Paradigmes,’ ‘Cool Colorado,’ ‘Disconnexion,’ ‘Foutre le bordel,’ and ‘Le Jardin.’ La Femme has toured extensively in the U.S., embarking on a nationwide DIY tour even before releasing their first album and going on to play festivals including ACL, Desert Daze, Voodoo Fest, Austin Psych Fest, and more. Internationally, they have played major festivals such as Glastonbury, Sziget, Music Wins. ‘Geography must be important to us because of the fact we traveled quite a lot over the last few years, and different places brought different inspiration to us,’ the band explains, ‘We like the folklore of places and what comes out of them.’