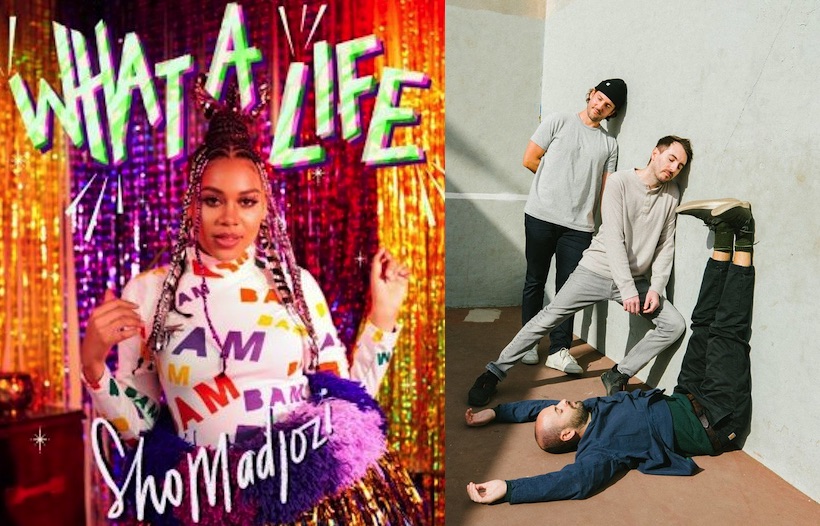 Tayla Parx – ‘Sad’: A playful and conversational song with a touch of R&B melancholia and very strong vocals. A few days ago, breakout singer, songwriter, actress, entrepreneur, and Grammys nominee Tayla Parx released a video for ‘Sad,’ a song that appears on her acclaimed album ‘Coping Mechanisms,’ which is out now on TaylaMade/Atlantic Records. ‘My favorite part about releasing my own music is that it’s a bit of a time capsule into my emotions,’ notes Parx. ‘When I listen to ‘Sad’ now it’s so funny that somebody could affect me so much so, that I wrote this quirky song about it. Maybe it wasn’t the healthiest reaction, but it was my own coping mechanism at the time.’ The new album blends pop, R&B, and traces of rap with plenty of Grande-esque high notes.

Paul Bergman – ‘Oh My Love’: A drunken love song with poignancy in the trembling and sobering vocals as well as a sort of grandiosity in the melody. Bergman’s melancholic tone immediately captures your attention and emotion with this song from his new album ‘The Other Side.’ The album ‘swoops in with triumphal mourning, those first, fist-swinging slide-guitar chords, and splashy, spaced-out drums courtesy of guitarist Stephen Heath (LA Takedown, Weyes Blood) and drummer Dylan Ryan (Ether Feather, Man Man).’ It has also been described as a ‘lovely little ode to loneliness,’ with an appreciation for both old and new music giving to Bergman’s work a singular sound while maintaining the feel of a classic record.

Har Mar Superstar – ‘Another Century’ (ft. Kam Franklin & Jackie Venson): A soul or an homage to old school R&B/soul with horns and sultry vocals building an authentic vibe and a warm euphoria. This is a song from Har Mar Superstar’s 7th studio album, ‘Roseville,’ a career-defining culmination of life and musical experiences that were heavily influenced by 70s AM gold artists including Todd Rundgren, Elton John, Carole King, David Bowie, Paul McCartney, Genesis, Hall and Oates, Meat Loaf, Dory Previn, and ELO. Texas musical legends in the making Kam Franklin (The Suffers) and Jackie Venson (one of the greatest guitarists alive) popped by to elevate ‘Another Century’ into a soul duet masterpiece. Denver Dalley (Desaparecidos) and T. Macey Taylor (Bright Eyes, Jenny Lewis, Amanda Shires) appear on another song, ‘Where We Began,’ which they helped write on the road while supporting Afghan Whigs a few years back.

Doss – ‘Puppy’: An eerie electronica with metallic, dance-y beats and ghostly vocals. The track accelerates over playful loops and swirls of synths, blending an ethereal vibe over a happy EDM tempo. ‘I had an ex once who called me Puppy, you know what I mean,’ says Doss. ‘I had fallen in love with their family and friends while we were together, so it wasn’t just about the person or the breakup with them, but about losing the whole world that had been so vibrant and intimate and important and familial. We had been broken up for a while, like maybe three months, and I got invited to a birthday party and decided to drive last minute. Driving back at 2 a.m. to Maryland, I was sort of parsing through how sweet and welcoming they had been, but how I knew that it would never be like how it was before and what to do with all of those feelings. There’s nothing like the feeling of a solitary night drive home, thinking about life.’

Allday – ‘Void’: A melancholic voice over a guitar-driven and wide-eyed ballad with a hooky chorus ‘You will avoid the void,’ whereas the vocals sometimes echo early Sufjan Stevens. And it comes with an interesting video. This is a new song of Australian musician and songwriter Allday, and the new single of his latest album ‘Drinking With My Smoking Friends’, due May 28 via Believe. The album captures evocative snippets of life from the ‘extended youth’ he found himself experiencing after living in Los Angeles for over a year. The album also marks a significant shift in genre, integrating more guitar-driven pop sounds into the talented lyricist’s sonic universe and tells stories of suburban drudgery and inner-city decay, crafting sculptures of Australian life and the hopefulness of not only youth but of youthful thinking as well. ‘There was a part of me that thought, ‘I want to stop being so relentlessly dark in my music,’ notes Tom Gaynor aka Allday. ‘Why don’t I just try to be a bit optimistic? All the songs on the record are deliberately optimistic but they contain shadows, and those are the optimistic songs I like because they feel more human.’ For Gaynor, the shadow belying his happiness was the death of a close friend a couple of years ago. He’s been focusing squarely on this record in that time, determined to create lightness, fun, and a sense of hope for the future. ‘In doing that, I hope my audience feels a sense of hope, even with their own shadows in life,’ he says.

Sho Madjozi – ‘Shahumba’ ft. Thomas Chauke: With its South African signature beats and guitars, ‘Shahumba’ is a sunny track with a festive and infectious African dancefloor by South African superstar Sho Madjozi. The song features the legendary Tsonga singer and producer, Dr. Thomas Chauke, and tells a story of a young girl navigating life in her hometown and the special relationship she has with her father, who has influenced her musically. Madjozi is herself a proudly Tsonga woman and she has made it her mission to always pay homage to her culture in her music. The song was taken from the 2020 mixtape ‘What a Life’ and comes with a video. ‘I felt so blessed to be the studio with the great Dr. Thomas Chauke. We were working and creating and combining our sounds. And the moment really hit me just after we finished making the beat. That I’m really here. This is a dream come true. He asked me what I want to sing about and I told him I wanted to sing about how unbelievable it was to have the opportunity to be there working with him. So we sang about where we’ve come from and celebrated where we are now.’ ”Shahumba’ is about our journeys as two musicians from rural Limpopo who have been able to achieve our dreams despite the challenges. I look up to Dr. Thomas Chauke so much, so we decided to tell it as a sweet story of a father and his daughter. It’s a beautiful and heartwarming video about victory.’

Forgivers –‘Some Future’: Members of The Gaslight Anthem, The Ratchets, Let Me Run have formed a band and have released their first single, ‘Some Future,’ a very muscular and dark piece of psychedelic rock with plenty of swagger, mixing British influences such as The Cure, The Jesus and Mary Chain, The Clash and Oasis but infusing it with their own unique and distinctive dynamic. Check out the video. ‘We want this to be a little more thoughtful than what’s out there – sensible yet senseless,’ says Winokur. ‘We’re just going to put things together that create tension, and see what comes of it. And if they come out sounding classic and happy and sad at the same time, then that’s kind of the goal. I’m trying to get back to what I could have been doing this entire time but was too blind to see it,’ says Alex Rosamilia. ‘Music is fun again. I feel like I’m getting to do this all over again with the knowledge that I have, and I want to make sure that I do it right.’ ‘And the four of us have done this so many times with other people,’ adds Alex Levine, ‘that we know when it feels right and when it really feels right. And this really, really feels right.’

The Zolas – ‘Another Dimension’ featuring Cadence Weapon: A strange and lugubrious electronic trap-rap track by Vancouver-based The Zolas bringing anxiety and disorientation. ‘We were in the studio tripping out on what it will feel like when it’s possible to properly get together and go big in the city again. The song came together super quickly and we found ourselves with a future post-pandemic squad track; clattering around the city draped all over each other, descending into throbbing after hours full of weirdos. I sent it to Cadence Weapon who I’ve known mostly through my brother and the Montreal scene and he jumped on right away. Everyone’s in the same headspace where we know it’s gonna happen but right now it still feels like another dimension,’ rapper The Zola’s Zach Gray says. Cadence Weapon added: ‘When I wrote my verse for ‘Another Dimension,’ I pictured myself as a futuristic street preacher proselytizing about a dystopian future that has slowly become our present reality. I wanted to be the voice of the omniscient being whose face looms from a giant telescreen in the film version of 1984.’ It is their first single of 2021 and a new campaign they dubbed ‘Z Days’ promised fans a new single on the 2nd of each month.

Coma Culture – ‘Coma Culture’: A dreamy pop song with beautiful harmonies and a very beachy sound that evokes a summer nonchalance. Young the Giant’s members Eric Cannata and Francois Comtois have teamed up with producer/songwriter Jon O’ Brien, owner of Music Box Studios and long-time collaborator, to form Coma Culture. This is the first single off their debut LP ‘The Camouflage’. ‘‘Coma Culture’ is about facing the coping mechanisms we turn to as we seek meaning in our lives—uplifting instrumentals and verse lyrics give way to a chorus that borders on self-consciousness and oversharing. It was written by Francois Comtois, on tour with Young the Giant, in a Saskatchewan hotel room during a polar vortex and brought to life at the Music Box Studios in Southern California right before the pandemic hit.’ Their debut album, ‘Camouflage,’ combines vintage instruments, modern recording techniques, and classic songwriting for a sound that’s immediately distinct yet warmly familiar.