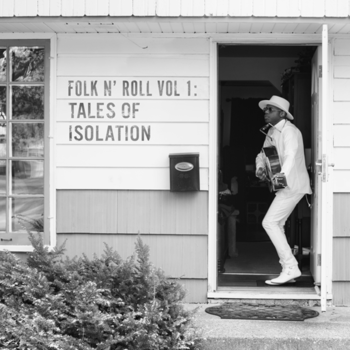 A new single from Lamb of God inspired by the No DAPL movement, a new album by J.S. Ondara, and several diverse tracks among these press releases from June.

KID DAA – ‘A Prison Unseen’: An anthemic song from German indie-rock KID DAD, and the new single from their debut album ‘In A Box,’ which will be released on August 21st via Long Branch Records. The powerful vocals lead this song that doesn’t lack any bombastic energy, emotion, and self-assurance. The track comes with a video, an abstract series of vignettes that are evocative of the song’s themes.

Giveon – ‘Favorite Mistake’: A new acoustic video for this song from rising R&B star hailing from Long Beach, a standout from his recently released ‘Take Time’ EP. Giveon’s soulful vocals resonate during this ride underneath the night sky, while he laments the complicated nature of a romantic relationship. ‘This visual is special to me because I finally get a chance to paint a picture of one of my favorite songs’ says Giveon. With his baritone, he is an artist who injects a real classiness into modern R&B, and he is certainly someone to follow as ‘Take Time’ has received widespread acclaim from fans and critics alike and has amassed 2.5M US streams across all platforms since its release earlier this year.

Foreign/National – ‘Balmy Evening’: From sparkling synth notes to full beats and dance grooves, Melbourne-based Foreign/National delivers a unique take on psych-pop with funky accents and jam-like orchestrations. This is the first track of their new album ‘The Garden,’ which was conceptualized during the band’s year spent in Berlin. The new album is said to incorporate a wide range of influences, from the cosmopolitan sounds of AIR and Stereolab to afrobeat/Ethio-jazz artists Fela Kuti and Mulatu Astatke. ‘This is the first release where we’ve had a firm creative direction from the beginning,” says band member Tom Stephenson (vox/guitar). ‘The Garden is more focused on the negative behaviors and hypocrisy we see in public figures – business leaders, politicians, the clergy and, of course, entitled men, ‘frontman Mark Gage (vox/guitar/synth/keys) explains. ‘Our judgments are not only reserved for the behaviors of these figures but also for our own, sometimes mirrored, behaviors that we can’t help but acknowledge,’ he adds.

Sweater Curse – ‘Close’: The new single from another Aussie band, described as a poignant and introspective indie-rock track inspired by the human condition. The song, written during a turbulent time with the help of their friend, Alex Lahey, delivers crisp guitar riffs, melodic texture from guitarist Chris Langenberg, as well as hazy vocal harmonies of lead singer and bassist, Monica Sottile and driving percussion accompaniment from Rei Bingham. The video that comes with the song was filmed entirely via Zoom and thematically compliments the track and relevance in the current COVID-19 climate. ‘My favorite part of making this video was being able to see all of our friends from other cities that we would usually hang out with when we are on tour. The idea of the video ties in with the concept of feeling close to our friends even when we can’t see them or hang out with them physically,’ says Rei.

Lamb of God – ‘Routes’: This is the fourth single of the band’s upcoming album out June 19th. A blistering and fast-paced trash/death metal track with D. Randall Blythe’s usual beast-like vocals, also featuring a guest appearance from Testament vocalist Chuck Billy. This is also a track for our time of protests as ‘’Routes’ was lyrically inspired by vocalist D. Randall Blythe’s time alongside native peoples at the Standing Rock Sioux Reservation in North Dakota during the No DAPL movement. This protest, which began with just a few Native women and children camping at the site in protest of the pipeline being built so near to their water supply on unceded treaty land, quickly grew to an encampment of thousands and received global attention.’ ‘I went to Standing Rock because I had heard reports of violence committed on the peaceful protestors thereby both state law enforcement and private security contractors, and this violence was not reported in mainstream media for the most part. I went to bring supplies and support these people, who were trying to protect their water, and thereby protect everyone, as everything in the natural world is protected. I was there a week, made some great friends, and learned a lot. It was a very profound experience in my life, and I knew one day I would write a song about it,’ said Blythe who thought his friend Chuck Billy, was the perfect partner for the song because of his Pomo Native American heritage. Chuck Billy added this to explain the full intention of the song: ‘It was a great honor as a proud Pomo Native American to be asked by LAMB OF GOD to do some guest vocals on this song. The No DAPL movement by the indigenous people of this country was a historic event. Being able to lend my voice to represent the Native American people, complementing Randy’s storytelling and lyrics, is something really special to me. I’m glad this movement was put in a musical message, and I am extremely happy to have been a part of it.’ The song comes with a video.

J.S. Ondara – ‘Lockdown On Date Night’: With the same heartfelt guitar and a voice that reminds us Dylan (with however a much better range), Grammy-nominated singer-songwriter J.S. Ondara has released a new album ‘Folk N’ Roll Vol 1: Tales of Isolation,’ a new collection of songs written in direct response to the current global pandemic, while in lockdown in Minneapolis. ‘As I’m sure it has for all of us, I found the period of isolation to be wearing down the equilibrium of my sanity. After being stuck in a mental rut for four weeks, I woke up one morning and spent three days writing these songs and three more days recording them in a friend’s living room in Minneapolis. It was a kind of vomit of words and melodies, compulsive and without any control or forethought. I wasn’t trying to make a record, I wasn’t trying to do anything really, I was only trying to provide myself with some kind of therapy, a desperate attempt at preserving my sanity. They are stories about the ramifications of a whole population isolating; about the personal, political, and economical scars that will linger for the rest of our lives long after we have found our way past this. In a crisis, the human spirit is laid bare, its volatility preyed upon and its resilience tested. This record is hence not only a portrait of the bizarre times we have unknowingly fallen into, but also a collective tale of the human spirit navigating uncertainty,’ explains Ondara. It is the follow-up of the 2019 ‘Tales of America,’ the debut album by this Kenya-born artist who has been channeling American folk singers.

John Lindahl – ‘Famous’: A powerful and passionate R&B track delivered with punch, warm emotional vocals, and a full vibe orchestration of keys, strings, and horns. If you can hear Michael Jackson in Lindahl’s vocals, there’s a real vintage ‘old Hollywood soundtrack’ quality to the song, the second track off his album ‘Opening Night: The Complete Score’ released via Bobbyboy Records/ Def Jam Recordings. The song, that comes with a video, is actually part of the Deluxe Version of his debut album. ‘This album is intended to create a deeper, more immersive experience for the listener who has already enjoyed the initial release of the body of work. It includes an entirely orchestral overture (including melodies and motifs from every song on the original album), an ‘Intermission’ skit to create the ambiance and atmosphere of the theater around you, acoustic renditions of ‘Honest’ & ‘Lies,’ a dance remix of ‘Lies’ (Luca Schreiner), and a remix of “Honest” featuring Nevaeh.  Aside from the remixes and acoustics, this was how I initially intended to release the album.  I want this universe and this story to be conveyed to you as vividly as I experienced it in my brain when I was creating it. I hope you enjoy,’ declared Lindahl.

Danileigh – ‘Dominican Mami’: The song, which features Fivio Foreign, blends hip hop and a street-savvy R&B theme, it’s also the latest single from Danileigh’s upcoming album and it follows up the hit collab ‘Levi High’ featuring Da Baby which has garnered over 30 million streams and over 10 million YouTube views. It’s also a rather repetitive street-beat-ready song, delivered with swag for an album she describes as a good representation of her life. ‘I create whatever I’m feeling at the time. I was really going through it so the album is a mixture of being in love, falling in love, going through bulls*** and then coming out of it, and feeling like a boss again,’ she explains. “It all comes from the heart and what I go through. What I write is where I’m at in life and what I’m feeling. I have definitely gone through things. I was in a really toxic relationship for like two years. I’ve had good relationships and times when I’ve felt great on my own. I’ve had all kinds of moments.’

BVDLVD, featuring Lil Darkie – ‘PUNK!’: This 19-year old UK artist (pronounced ‘Badlad’) from the trap metal scene is releasing a studio album called ‘LUNATIC’. This song gives the tone with explosive shaky visuals and a disturbing Joker-like delivery, and overall a good example of his jam-packed album filled with his trademark abrasive concoction of trap, industrial metal, and hip hop. While he has co-produced and mixed all his own tracks, he has also edited and directed all his own visuals, creating a unique style and a tribute to all the misfits and outcasts of the world, burning through existing genres to create a raging new sound set to define the 2020s.

Yemi Alade – ‘Boyz’: An uptempo Afropop from Award-winning Nigerian superstar Yemi Alade, who most recently contributed two tracks to Beyoncé’s ‘The Lion King: The Gift’ companion album. The song is taken from her forthcoming fifth LP and brings a very exotic dance party while blending together rootsy elements and a modern vibe. Yemi’s breakout single ‘Johnny’ made her the first African female artist to earn over 100 million views on Youtube while she has collaborated with a number of global stars including Angelique Kidjo and Rick Ross. With more than 11M of followers on Instagram, Yemi Alade is a world superstar.