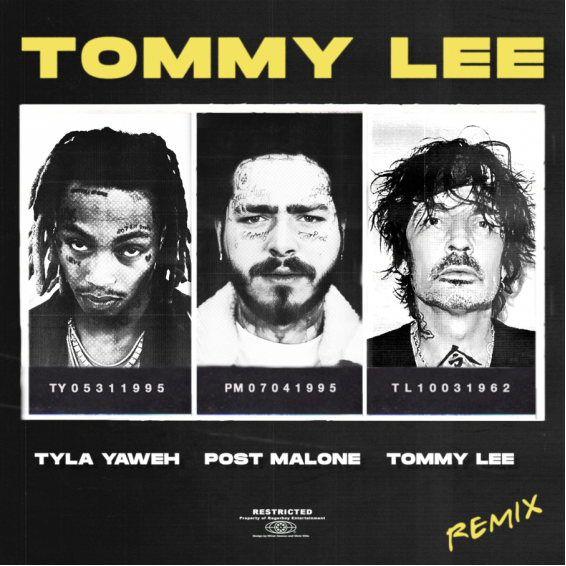 ‘Tommy Lee’ among the Press Releases From July

Tayla Parx –  ‘Dance Alone’: Taylor Parks, known by her stage name Tayla Parx, is blending pop, R&B, funky elastic bass lines with helium-sugar vocals. It’s a dance track co-written by Parx, Grammy Award-winner Kameron Glasper (Babyface, Tyrese) and Lara Andersson, and was produced by Jeff ‘Gitty’ Gitelman (H.E.R., J. Cole, Mac Miller) and Oscar Görres (The Weeknd, Taylor Swift, Charli XCX) at Parx’s own Grey Noise Studios in New York City. The song is released with a video( TaylaParx.lnk.to/DanceAloneVideo) that she describes: ‘We’re all stuck inside, while coping with being away from loved ones more than usual. We need human connection, but at least when you’re home dancing in your pajamas while blasting your favorite song, you feel a little less alone. You have the music to keep you company. Show me you’re dancing alone if you can relate.’ She will release a new album, Coping Mechanisms, later this year.’

Tyla Yaweh – ‘Tommy Lee’: A strange collaboration between genre-bending hip hop artist Tyla Yaweh, longtime Mötley Crüe drummer Tommy Lee and Post Malone. ‘I’m excited to be releasing records with my idols,’ says Tyla Yaweh. ‘I first had Billie joe Armstrong clear a sample for me and hop in my last video with Wiz Khalifa [‘High Right Now’ remix]. Now I’ve got a legendary track with this badass Rockstar Tommy Lee and my brother Post Malone. This track is so special to me!!! I also got Travis Barker on my album, so it’s like Rockstar shit everywhere on RAGER BØY!!!’… ‘I was humbled that Tyla and Post chose to name a song after me. I couldn’t wait to get my hands on it with them and give it my spin. We had a blast! They are the new rockstars!  I love them both!’ says Tommy who had visibly a blast recording the song according to the video. It’s a repetitive pop tune with powerful drums, performed with fun and I am not sure what was the exact role of Post Malone in all this. ‘It’s a lifestyle to me—waking up, partying, being a rockstar, being a rebel, being that person that stands out and is raging at all times,’ Tyla says of the concept.

MK xyz – ‘PASS IT’: Buzzing singer, songwriter, and dancer MK xyz has unleashed her new single featuring G-Eazy with a video you can watch HERE. Fusing genres from R&B to pop and hip-hop with confidence and impeccable fast-paced dance moves, the tone is professional and the colors acid-bright, while G-Eazy adds his own flavor to the track. ‘My first time on the west coast was in LA & Vegas. ‘Pass It’ became the baby born from that first experience, sort of like I was a west coast virgin.’ says MK xyz. ‘But it’s a whole vibe in Cali. I had so much fun with Hitmaka and Chrishan trying to hit the nail on the head in translating that vibe sonically.’ Get ready for MK xyz to hit the sweet spot in 2020.

MAJ  – ‘Supreme’: A Dallas-based singer-songwriter-producer whose grunge-inflected production, nocturnal hip-hop, and soulful confessional storytelling have earned him nearly 10 million total global streams in less than two years. ‘Supreme’ is the first new music from Maj since the release of Majestic, his Def Jam label debut EP released in March, and let’s just say that it’s a good thing he has included the lyrics on the video, otherwise, I would have barely guessed anything of the lyrics (and that would be a shame) mostly because of a flow of heavily distorted vocals and the fast-paced of some lines. Some people say he sounds like Juice WRLD, I would not even try to tell.

Daniyel – ‘ Alone On Your Birthday’: California-born, Portland-raised Daniyel Weissmann raps over this new track and its vintage piano keys. And despite the melancholy of the theme, the song catches up with an upbeat tone, ‘I’ve spent a few birthdays alone, sometimes it just feels better that way,’ Daniyel says. ‘But really, no one wants to be alone on their birthday. So this song is for anybody who feels alone, especially on their birthday. You ain’t alone. Sometimes you just gotta speak up.’ His debut ‘MADISON HIGH’ EP, a collection of songs inspired by his experience at his Portland high school, was released earlier this year to acclaim from Wonderland Magazine, Lyrical Lemonade, Variance Magazine and more.

Liza Owen  – ‘Why Aren’t We Having Sex?’: A dirty bass groove and slick beat give way to a hook highlighted by the most pervasive quarantine question of all, Why Aren’t We Having Sex? ‘I wrote ‘Why Aren’t We Having Sex?‘ a few hours after checking into the most ridiculously sexy house I’ve ever stayed in,’ said Liza. ‘It felt like a ‘70s James Bond villa. With the mood being just right, the light just right and the drinks flowing…Isn’t that the question on everyone’s mind?’ Liza, who initially lent her sharp lyricism to the likes of Selena Gomez and BTS as a songwriter, is ready for her solo project. The song comes with a sexy and cinematic video with Liza wearing a wedding dress and white cowboy hat while the visual intercuts various couples (and some famous cameo including PRETTYMUCH’s Edwin Horonet) asking this same question.

Zaliza – ‘Below’: A very atmospheric song filled with electronic cracking textures and Zaliza’s warm vocals, it’s experimental dark pop and the first from her upcoming double A-side single ‘Below’/’Little Raptures’ out August 7th. It has been called ‘A haunting, captivating expression of vulnerability,’ and ‘the perfect soundtrack for emotional turbulence and the fear of truly being known by another.’

Evangeline Gentle – ‘Sundays’: Powerful vocals working like a youthful version of Stevie Nicks on this track blending a country-folk vibe with R& B. The song, by the Scottish-Canadian singer-songwriter, even sounds a bit like a Fleetwood Mac tune, it has this classy timeless vibe. ‘Ethereal memories of a love story come in waves as Evangeline performs to us, unaware of the world revolving around them,’ says video director Rob Viscardis of the video. ‘What emerges is what seems like the origin story of a long-time love, but as images of the two blissful lovers are contrasted with a sudden separation, we are left longing for something that is perhaps too good to be true.’ She is set to release their debut album, Evangeline Gentle, on August 21 via Sonic Unyon.

Lewis Del Mar – ‘Do You Need Me’: New York duo Lewis Del Mar (Danny Miller and Max Harwood ) have unveiled this sweet pop song filled with melancholy and a cinematic vision. It’s also a single from their forthcoming sophomore album AUGUST, out August 21 via FADER Label. ‘Do You Need Me’ is a mixed bag,’ the band says. ‘A drunken car crash, a crowded bathroom stall, an insatiable appetite. As I get older, I watch my mind chart distorted webs between my lived experience. Some of these moments were recent, others distant. But they share a metallic taste in my memory. So much of the dissonance in my life stems from my attempt to interpret my experience as a straight line. When in fact my reaction to a given moment is always based in how that moment relates to everything else that I’ve witnessed. That’s how I felt when Max and Casper first played me this beat. Superhighways running through foreign dive bars, mixing like milk in the pitch black of a humid night.’

Payday – ‘Disneyland’: A new song by rising 16-year-old artist PAYDAY, the youngest of these press releases from July, blending catchy sweet pop, immaculate beats, and a confident hip hop delivery barely perceptible. The young prodigy picked up a computer mic for $14 dollars at Walmart when she was just 12, and began pirating beats online with an eye toward favorite artists like Tierra Whack, Tyler, The Creator,  and Lil Uzi Vert. She has already built a mini cult following with her debut single, ‘Super Thicc,’ which has amassed more than 500K streams. And The track is from her debut EP P.U.K.E. Tapes Vol. 1.