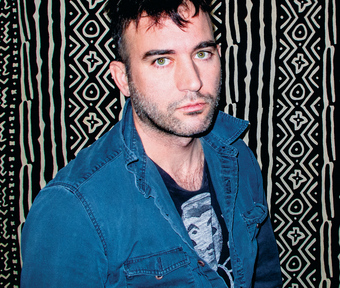 Sufjan Stevens among the press releases from July

A new song by Sufjan Stevens from his upcoming album, two young rappers, and an eclectic mix of pop and heartbreaking folk among these press releases from July.

Evangeline Gentle – ‘Black is the Colour’: An aching a cappella gospel song performed with a soulful-folk voice. This is one of the 2 a cappella singles released by Scottish-Canadian singer-songwriter Evangeline Gentle, who has also dropped a live video for the sweet ‘Ordinary People’ where her spectacular voice is front and center against the acoustic guitar. She is set to release her self titled debut album on August 21 via Sonic Unyon. The record is described as focusing on openheartedness, finding the strength to be vulnerable, and uplifting marginalized voices. ‘During the three years I spent writing this LP, I trudged through periods of deep self-doubt, often wondering if I should give up,’ Gentle says. ‘As a child, I believed performing was my inevitable fate. Somewhere along the road to adulthood, I internalized a lot of messaging about my queerness as something that made me inherently less gifted and valuable as an artist. Each song on this record is a landmark on the journey toward reestablishing my childlike ambition and spirit.’

LANY – ‘If This Is The Last Time’: A rather morose song on a simple tempo, that soars into a catchy pop chorus, eventually growing into a multi-layered composition. ’I started writing ‘if this is the last time’ toward the end of 2019,’ says frontperson Paul Klein. ‘It was initially inspired by the inevitable truth that one day my parents aren’t gonna be here anymore, that picking up the phone and calling my mom is actually a luxury that I won’t always have. Moving into 2020 and being thrown into a global pandemic and being faced with a new reality, it became clear to me that finishing and perfecting this song was imperative, that maybe this was a song the world could lean on.’ The song is from the Los Angeles-based trio’s forthcoming third album ‘Mama’s Boy,’ an intentional return to the band’s Great Plain roots, a sweeping tribute to home, heritage, and Americana filled with songs that highlight what’s ‘symbolic of being an American kid’ today. It is due out on Interscope Records later this year.

Card Reader – ‘Sore Eyes’: A muscular fuzz with passionate vocals, and bouncing drums building a rather sad melodic post-punk-pop song. ‘I wrote this song after I lost a close friend,’ said guitarist/vocalist Tom Petito. ‘The message is resounding: life is short, any day could be your last so don’t settle for less. Go after your dreams unapologetically.’ The Long Island trio will be heading back into the studio this summer to record their first EP, which is due to be released in the fall.

Sufjan Stevens – ‘America’: A glitchy cosmic electronica haunted by Sufjan’s vaporous and youthful vocals. This is the debut single off his upcoming and eighth album, ‘The Ascension’ set for release September 25 on Asthmatic Kitty Records. The song and the album are described as an indictment of a world crumbling around us—and a roadmap out of here. There’s something quite mysterious and almost mystic in the swelling development of the space-odyssey-like song which lasts for more than 12 minutes and ventures into deep spatial explorations around minute 8. Sufjan has explained that the foundations of the album are ‘a call for personal transformation and a refusal to play along with the systems around us,’ while ‘America’ is ‘a protest song against the sickness of American culture in particular.’ However, if you feel that he is jumping on the moment, you have to know that it was written six years ago, ‘I was dumbfounded by the song when I first wrote it,’ Sufjan says. ‘Because it felt vaguely mean-spirited and miles away from everything else on ‘Carrie & Lowell,’ so I shelved it.’ The song is filled with religious scriptures references explaining his profound disappointment in American culture,’ I have loved you, I have grieved/I’m ashamed to admit I no longer believe’… is Sufjan losing his faith,… in America?

Monograms – ‘American Dreamz’: A dark post-punk tune starting with lugubrious vibrating synth-bass lines and monochord vocals, soon catching a passionate dancing beat à la Joy Division. It’s a sinister dancefloor fitting with today’s time. Brooklyn-based songwriter and multi-instrumentalist Ian Jacobs, aka Monograms, will release a 14-track album ‘Only A Ceiling Can Stay Inside Forever’ on July 31st via PaperCup Music. The album was recorded and written almost entirely in isolation at Jacobs’ home studio during the Covid-19 quarantine and amongst all the recent protests and social injustices that have taken place over the past months. Jacobs has shared his feelings: ‘Everyone I know just feels really frustrated about the situation. The politics, the sacrifices everyone is making, and the reality has been a very twilight zone-like kind of time for the entire world and the country. The title of the album was a phrase I kept thinking about within that thought process. When is it going to be ok to go outside again? And also how you can’t keep things hidden and locked up forever… these checkered pasts have to get drawn out. These last few months just felt kind of surreal, a true ‘how did we get here?’ kinda moment. And I think personally, I just needed to do something creative to bob and weave with all these things, so I just started writing some words down and recording some ideas and experimenting. Some songs were more electronic and pulsing through the frustration of the time, and some are more down-tempo and introspective. After a few weeks, it all started to spiral into what felt like a cohesive thought, so it became an album in my mind.’

Kaash Paige – ‘Jaded’: A modern R&B song with heavily auto-tuned high-pitched vocals which can make you dizzy just after a few seconds. The song by the young Kaash Paige has something almost disorienting, like a journey on a high helium balloon in the sky. For the Def Jam signee, the thrill of love is gone, and this is her complaint sung in a euphoria-like tone. The release date for her upcoming album, ‘Teenage Fever’ has yet to be announced.

Matt Costa – ‘Last Love Song’: A very melancholic and heartbreaking song with the intimacy of a simple fingerpicking guitar while warm back-up vocals grow like a soothing blanket. Matt Costa is at his most vulnerable during this latest track to be lifted from his brand new full-length album, ‘Yellow Coat,’ to be released on September 11. ‘Some feelings stick with you forever,’ says Costa of the song that turned to be a break-up song despite its church-like fragility, and tender folk moments. Produced by Alex Newport, ‘Yellow Coat’ is described as ‘a masterpiece of heartbreak, equal parts lost Sixties AM radio hits, folk-pop beauty and dark night of the soul music.’  It is the product of Costa penning letters to himself about the end of a relationship that had lasted almost a decade, looking for inspiration in Van Gogh’s ‘Dear Theo’ and John Steinbeck’s ‘A Life in Letters.’ The song comes with a video.

Pinegrove – ‘Endless’: A poignant pop song filled with emotional soaring vocals, pounding slow drums, and country guitars. The band is sharing a video for ‘Endless,’ which comes from their already critically lauded new album, ‘Marigold.’ ‘In this video, we wanted to explore tenacity & endurance of spirit,’ explains singer Evan Stephens Hall. ‘In this moment of turbulence in our country, as many of us are banding together to fight racism, to stay healthy in a pandemic, & to live with dignity through economic oppression, we believe in the power of resilience and perseverance. Keep going. It’s working.’

Billy Lemos  – ‘Always’: Languid R&B-ish vocals over a dreamy soundscape of sparse keys and clicking noises. ‘Always’ is a unique sounding composition that features Toronto-based artist Monsune, and this is also the new single from emerging producer Billy Lemos. ‘Always is the first single off my debut album, ‘Wonder,’ says Lemos, ‘I wanted to make something that sounded cinematic but also tasteful. The track, like many on the project, was made entirely remotely. Scott (Monsune) was amazing to work with and sent me a bunch of ideas and we picked out and refined what worked best. I’m eager to share the rest of the album and feel like it is by far my best work yet.’ Notion has called his music ‘A hazy mix of West Coast slacker rock, hip hop sampling and dreamy R&B hooks it sounds like the illegitimate child of like Steve Lacy, Mac DeMarco, and Frank Ocean.

Alex Harris –‘I AM’: Buzzing Texas rapper Alex Harris evolves with elegance and rhymes over a dreamy R&B background. During the track, produced by C.J. Plays, Harris mixes up strains of R&B, rap, soul with a large dose of storytelling, and a quite groovy flow that culminates in the refrain, ‘Everything that I am is everything that I am, motherfucker, I am.’ The song comes with a cinematic video directed by Martin Cruz and James Baxter, going from mountain top footage to midnight city vignettes as Alex cruises the streets at full speed and with loaded bars.