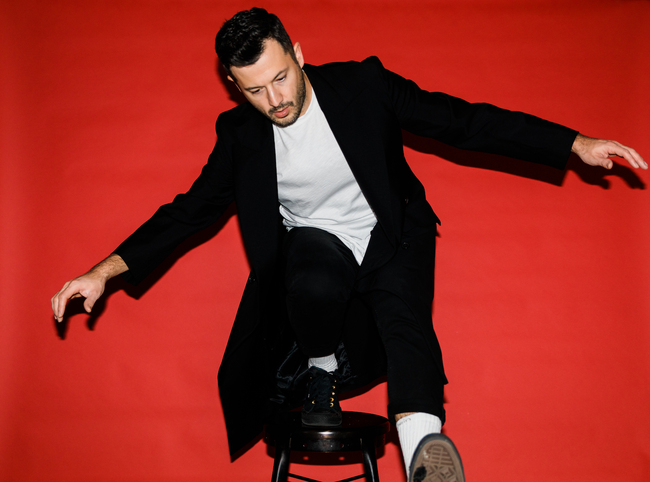 SYML is among the press releases from January

SYML – ‘True’: An emotive soulful song with vulnerable vocals and ethereal highs à la Thom York, subtly evolving into an intense, and lush soundscape. This is the solo project of singer, songwriter, and producer Brian Fennell and the prelude to much more music to come in 2021. ‘True love is painful,’ says Fennell. ‘True love fails. True love moves. We have to have faith in it for it to be real, like God. This song is about watching what we thought was true love fall apart. It’s about divorce and making the mistake of thinking you are immune to it. I got to team up with some friends to record this one, including a new friend, Paul Meany, who brought an amazing flavor to the mix.’ Since his debut in 2016, Fennell has risen to prominence with an acclaimed body of work celebrated for its honest songwriting exploring themes of longing and loss, earning millions of streams across platforms.

Jazmine Sullivan – ‘Girl Like Me’ (feat. H.E.R.): Jazmine Sullivan, H.E.R. and super-producer, songwriter Bongo ByTheWay have teamed up for this buoyant R&B single, filled with vocals harmonies, and crispy sounds. The song is almost acoustic and quite powerful and it will accompany Jazmine Sullivan’s forthcoming EP ‘Heaux Tales,’ which was released on January 8, 2021. The song was concocted by Bongo ByTheWay ‘one of music’s most in-demand producers’ who earned two 2021 Grammy nominations for his contributions to Kanye West’s Jesus Is King (Best Contemporary Christian Music Album) and Ant Clemons Happy To Be Here (Best R&B Album). Besides this, Bongo produced many of the most significant projects of last year, including Ant Clemons and Justin Timberlake  ‘Better Days,’ Pop Smoke’s Shoot For The Stars, Ty Dolla $ ign’s Featuring Ty Dolla $ign, Teyana Taylor’s The Album and more.

Chevelle – ‘Self destructor’: I got a big Muse meets Tools vibe for this metal guitar and intense falsetto. Multi-platinum rock band Chevelle is making a return with their first new music in five years, and their ninth full-length album, ‘NIRATIAS,’ will be out on March 5, via Epic Records. The single, ‘Self destructor’ is tossing and turning between moments of heavy catharsis and alternative hypnosis, with a nimble guitar riff and throttling drums. The sci-fi music video for the track perfectly complements its mood, as the near six-minute cinematic clip follows the duo on the search for truth. Dressed in black suits and ties like G-men, they trace the steps of a ghostly astronaut deep into the woods.

Zayde Wølf – ‘Back at it’: An angry and hard-hitting dancefloor, a massive sound where an EDM production meets ferocious pop-rock. The song is a powerhouse and sounds festival-ready unless you can imagine it to be the soundtrack of an action movie. ‘Back at It’ is the first single from Wølf’s third full-length album due out this spring, and 2021 is expected to be a huge year for Dustin Burnett the mastermind behind Zayde Wølf. ‘These songs are helping me in all these different ways,’ says Burnett. ‘For a song to start in one place and then move all over the world to people who speak very little English is wild. These people reach out to me daily and say they are impacted by these songs in ways that turn their week around for better, or that the songs lead them to rethink a hard situation… and that’s powerful and humbling to me.’

Chad Lawson  – ‘When the Party’s Over’: You can be sure you have made it when your music is covered by a professional composer. There is no doubt about it, Billie Eilish and FINNEAS have certainly made it, and pianist and composer Chad Lawson has shared his cover of ‘When the Party’s Over,’ a quiet and reflective interpretation of the famous melody. ’A great song is a great song no matter the genre or instrument,’ says Lawson. ‘When I first heard this track, I was geeking how FINNEAS crafted such a unique melody based on his chordal theme; so creative. Add Billie’s unabashed vulnerability to the mix and you have the artistic marriage of head & heart. I knew this song would resonate with just a piano.’ You can watch Lawson playing the song. His last album, ‘You Finally Knew’ is ‘an invitation for self-reflection’ which has served its role so well that Lawson has been overwhelmed by the number of people reaching out to express how his music has helped them through difficult times, especially during the pandemic. He has even launched a new podcast, ‘Calm it Down’ as a result.

Zara Larsson – ‘Talk About Love’ featuring Young Thug: A languid auto-tuned duo featuring multi-platinum pop star Zara Larsson and hip-hop heavyweight Young Thug. The upbeat and free-spirited new single, produced by Mike Sabath (Lizzo, Meghan Trainor, Jonas Brothers) finds Zara boldly declaring ’I don’t wanna talk about love,’ with fierce energy and a melodic verse from Young Thug. The single comes from her highly anticipated forthcoming album ‘Poster Girl.’ ”Talk About Love’ is about that phase before two people work out what they are to one another,’ Zara explains. ’That specific window is so beautiful and fragile, as soon as you start asking ‘are we doing this?’ or ‘how do *you* feel?’, for some people that ruins the magic. ‘Talk About Love’ is savoring that moment before you have to decide.’

Kino Motel – ‘Simple Desire’: A wandering, adventurous pop with shifting spacious soundscapes that either flirt with dissonance or harmonies. Rosa Mercedes takes on lead vocal duties, weaving her addictive melodies around deep rolling basslines, while bandmate Ed Fraser provides a bendy soundscape on guitars and synth, using seemingly elastic notes to bend each section into the next, and Josefin Runsteen completes the composition with some beautifully-vintage drum beats. It’s quite intriguing while the video for the song is a sequel to the Bangkok-set first single ‘Waves’ and forms the 2nd of a 5-part series that will see Kino Motel take us around the globe.

Airpark – ‘Bring It Back My Way’: A romantic, expressive and heartfelt song featuring Erin Rae on vocals, with sweet pop guitars curling in your eardrums like Beatles-que arrangements. This is a new single of the Nashville-based duo’s upcoming EP, ‘Quiet Type: an Intimate Collection of New & Old,’ due out February 26th via Eugenia Hall Records. ‘’Bring It Back My Way’ is a song about missing someone,’ Michael Ford, Jr.says, ‘and how jarring it feels that after a relationship is over (oftentimes) there’s suddenly zero communication with this person you’ve spent so much time with. In terms of the recording process, the highlight was definitely Erin’s involvement. As soon as she started singing the first chorus we all quietly lost it in the control room — her voice and vocal arrangements were mesmerizing.’

Cole Anyway – ‘Sundown’: A sun-soaked languid instrumental by LA-based composer and artist Cole Anyway (Cole Emoff) accompanied by a static visual bringing the same peaceful vibe. This is the final single to be released ahead of the upcoming interactive EP, ‘Sitting With Stillness’ a collaboration with Canadian filmmaker and animator, Cole Kush (Mac DeMarco, Homeshake, Jerry Paper, TNGHT). ‘The EP is inspired by the idea of sitting with the feelings that arise (especially when doing something like releasing music) and just letting them be,’ Emoff explains. He began recording in 2018, tracking all instruments and vocals except bass, for which he called on former bandmate Brett Banks of Brooklyn psych band Quicksilver Daydream. A fanatic for detail, he spent endless hours tweaking the songs before deciding to embrace the unpredictability of the creative process. Upon this realization, he sent off the songs to Adam Lytle, frontman of Quicksilver Daydream, for mixing and Jonny Schenke (Parquet Courts, The Drums) for mastering. Ever-inspired by the potential of music and visuals together, Emoff recruited filmmaker/animator Cole Kush to build an interactive video experience for the EP.

The Black Angels –‘Manipulation’: The throbbing psychedelia of the Black Angels performed live at Levitation and the second entry of The Reverberation Appreciation Society’s  Live at Levitation series. The artists and sets showcased on Live at Levitation have been chosen from over a decade of recordings at the world-renowned event, and documents key artists in the scene performing for a crowd of their peers and fans who gather at Levitation annually from all over the world. The LP (out March 26) captures a slice of the early days, recorded at Austin Psych Fest 2010, 2011, and 2012, with 6 tracks from their first two albums. The Black Angels’ Christian Bland explains, ’Since the beginning… The Black Angels were meant to be heard live. This record captures the rumble of the drums and amps and the very essence of the way it should sound. Now future generations and new listeners can now hear how these songs were meant to be heard.’ Watch them here.