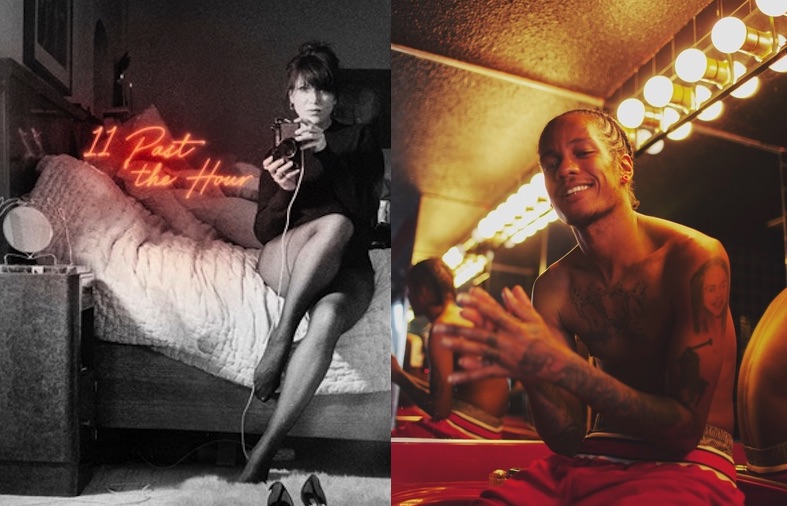 Imelda May and Chris Crack among these press releases from January

Philmon Lee – ‘Where Was Your Love’: An emotive radio-ready anthem with Lee’s soulful howl for this take on an emotionally-charged pop ballad. Simmering steady beat and anxious bass thump echo underneath his robust delivery of the verses, the energy builds up as his voice takes flight on the hook where he asks, ’Where was your love when I was down and out?’. This is his first song of 2021 released via Epic Records, which comes with a lyric video. Lee has received praise on social media for his hair-raising live performances, including a recent cover of Hillsong UNITED’s ‘Oceans’ on TikTok, covers of songs by names like Ed Sheeran and Lewis Capaldi, and a series of live performances from Live In The Vineyard.

Silk City – ‘New Love’: With Ellie Goulding on vocals, this is the new dancefloor release by the Grammy-winning duo featuring Diplo and Mark Ronson. It’s a banger with a studio-4-vintage vibe and a large disco ball shining above, a mood largely exploited in the video directed by Ana Sting, ‘I’m always stoked to get back in the studio with Mark,’ says Diplo. ‘We’ve been constantly trading ideas since the start of Silk City and finally found the time to bring some of them to life. We came out with this classic house record and Ellie was kind enough to lend her voice to it.’ ‘I love the music that comes out when Wes and I get together,’ says Ronson. ‘It has a joy to it that’s different from everything else I work on. I’ve known Ellie for over ten years, and it’s great to finally get to make something together. Her voice has such a pure tone that cuts through everything.’ ‘I’ve known Mark and Wes for years and it seemed only right to make a tune together, at a time where we all need to dance and be free, even if just in our kitchens,’ says Goulding. ‘The song is about losing yourself on your own, not needing to be seen, knowing that the one that got away could be just as happy as this too. The main concept is dancing on your own not needing to be seen.’

Amanda Shires – ‘Our Problem’: An all-star song featuring a vibrant choir of female powerhouse from Cyndi Lauper, to Angie Stone, K.Flay, Lilly Hiatt, Linda Perry, Morgane Stapleton, Nona Hendryx, Peaches and Valerie June on vocals, as well as Sheryl Crow on bass, Jason Isbell on guitar, Peter Levin on keys and Chris Powell on drums. The song was released to celebrate the anniversary of Roe vs. Wade, and the result, with its wobbling keys, sounds like another we-are-the-world big poignant chorus. ‘I’m very grateful to have so many of my sisters joining me for ‘Our Problem,’’ Shires says. ‘The issue of women’s rights and reproductive health affects us all. ‘Our Problem’ represents women of all generations, musical genres, and communities. Music has the power to bridge gaps and bring people together and I hope that ‘Our Problem’ reminds you that we are all in this world together and that we can be there for one another no matter what. You are never alone and I’M ON YOUR SIDE.’

Mimi Webb – ‘Reasons’: A passionate new song by Mimi Webb that begins very quietly with delicate clean guitar, followed by a seriously catchy and sweeping hook showcasing Mimi’s big delivery. The song comes with a fancy video capturing the song’s upbeat energy with dazzling vignettes of Mimi on a playground swing, in a porcelain bathtub, and rotating on a mirrored circle as she dons stunning high-fashion couture looks for each scene. ‘We’re just people made of broken pieces. I’ve got secrets. You’ve got secrets in your eyes,’ she declares. About ’Reasons,’ she commented, ’For me, this song really represents the feelings of loneliness, but in the way where we are all just people made up of a bunch of different things. You only have yourself to rely on for this, but then it comes to meeting someone who has all the same broken parts as you do—which turns into a messed-up love. The making of this music video was such an incredible experience. The crew was all just so amazing, and glam really pulled it out of the bag. It was the biggest video I’ve done so far and was so fun to really push myself out of my comfort zone from the looks we went for to the positions and movements I was throwing. I really felt my confidence take over and never felt more powerful.’

Chris Crack – ‘False Evidence Appearing Real’: A commanding rap delivery by Chicago MC Chris Crack over a fierce and funky Sonny Jim instrumental. This is a new song from the rapper’s forthcoming debut album ‘Might Delete Later,’ out February 12 via Fool’s Gold Records. Pitchfork called him ‘a wiseass combination of Danny Brown and Chris Rock’ and I can see why, while he proudly moves among wolves and other animals in the video. This melodic approach to hip-hop is quite efficient.

Raissa – ‘SHADES ON’: Weird track with laser-like synth noises above sweet multi-harmony vocals. The song is described as freestyle and comes from Raissa’s forthcoming debut EP ‘HEROGIRL,’ out later this year via Mark Ronson’s Zelig Records/Columbia. ‘This song was a freestyle, a tongue in cheek moment about feeling like a boss and letting everyone know,’ Raissa says. The narrative arc of the HEROGIRL EP chronicles a hero’s journey, a classic storytelling device wherein the protagonist crosses the threshold into another realm to learn a critical lesson that can then be applied to the normal world. Heavily influenced by Raissa’s fascination with sci-fi and fantasy aesthetics, the HEROGIRL EP positions Raissa as the hero of the story, but the EP’s embrace of child-like naivety, a complete lack of cynicism, and finding strength in what you love—rather than focusing on what makes you miserable—extends far beyond the music to her audience.

Thee Sacred Souls – ‘It’s Our Love’: A sweet-soul ballad with a girl-group vibe, wobbling organ, dense drumming, and high-pitched vocals. Filmed on Super 8 at the end of 2020, the video captures the vintage studio quality of the tune that was originally found as the b-side to their recent ’Will I See You Again‘ released on January 8. The San Diego, CA-based Sweet Soul Mavericks will release the song via Penrose Records, the recently launched imprint from the iconic House of Soul, Daptone Records. ‘We wanted to capture candid moments of our time at the Penrose studio and hangin’ with our crew around SD for the video,’ the band notes of the video. ’We reached out to our friend David Lampley, who specializes in Super 8 analog film. His experimental shooting style along with the visual quality of Super 8 film fit the laidback and dreamy mood we envisioned.’

Anna Akana – ‘Run’: Simple piano chords and synth swells start the track with symphonic orchestration before Anaka’s voice soars into a much simpler ballad. This is her second single, following November’s ‘Pink’ and leading up to Akana’s upcoming EP ‘No Longer Yours,’ out February 19. ‘Akana was inspired by the relief one feels after finally getting over a relationship,’ says the press release while Akana describes the 6-song project as follows: ‘This EP is about the process of assembling the broken pieces and stitching them back together. It’s about the moment you finally see the person who used to make you nauseous and realize it doesn’t sting so much anymore. I had so much clarity about the things that weren’t working for me, what I had to let go of, and how I wanted to shape my life moving forward with more self-awareness about what was within my grasp to change.’

Ensemble Mik Nawooj – ‘Beethoven on Struggle’: An attempt to marry hip hop and classic music? And the result is both surprising and strangely empowering, fully transcribed in the video showing the hip hop orchestra mixing a rap delivery with strings and operatic voices. This is a track from ‘Death Become Life,’ the forthcoming album from acclaimed Oakland-based hip-hop orchestra Ensemble Mik Nawooj, slated for release on March 19. ‘The Beethoven piece we sample in ‘Beethoven on Struggle’ is the Coriolan Overture, which he wrote for Heinrich Joseph von Collin’s 1804 tragedy Coriolan,’ JooWan Kim, the group’s artistic director-composer, says of the single. ‘I chose this piece as the basis because the play’s tragic hero, Coriolanus, reminded me of how hard it is to not give in to outside pressure even if you’re doing the right thing (or especially if you’re doing the right thing). At times, it doesn’t matter if something is right or true, and at these moments we make decisions that define us.’‘Death Become Life’ consists of ten tracks and five accompanying live performance videos. The Suite’s three compositions deconstruct classic works of Mozart (‘Mozart on Joy’), Beethoven (‘Beethoven on Struggle’) and Bach (‘Bach on Transcendence’), and each corresponds with a principle of Greek philosophy: Ataraxia (freedom from fear of death), Apatheia (freedom from violent emotions) and Eudaimonia (blessedness).

Imelda May – ‘Just One Kiss’: A rocking song with a smart groove and big guest stars, as Noel Gallagher is on vocals and Ronnie Wood is on guitar. It’s sexy and unapologetic with aggressive guitars like in a Pretenders song, going into some humorous situations in the video. This is a new single from Irish singer-songwriter Imelda May who is returning with her sixth studio album, ‘11 Past the Hour,’ out on  April 23 via Decca Records. ‘He’s just joyous to be around. It’s infectious,’ May says of Wood, ‘He’s fast, really on-the-ball, and he knows intuitively when something is working.’ Of Gallagher, she says he brought his ‘great vibe and kick-ass voice.’ May describes ‘Just One Kiss’ as ‘That moment you know it can go either way. The sharp notion if you succumb you might just lose control. The split-second decision you know might change everything, with just one kiss. Could you resist?’