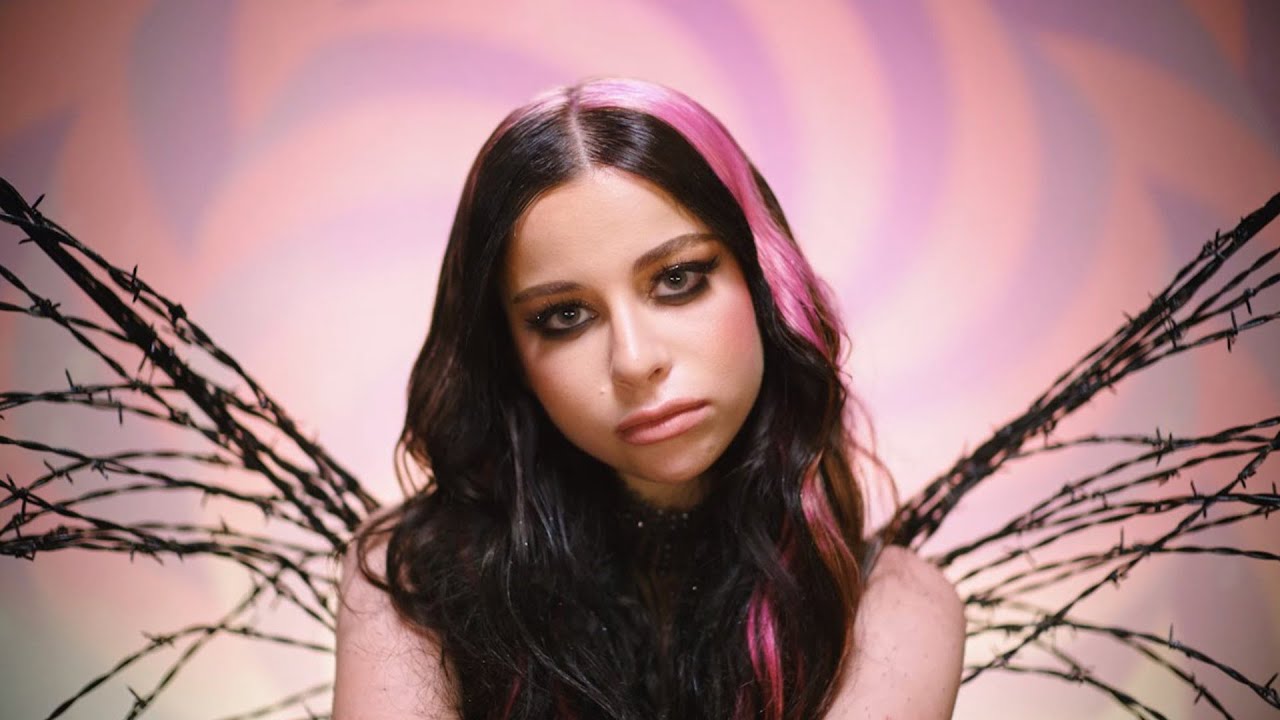 Elise among the press releases from February

Palm Ghosts – ‘Blind’: A dark synth-pop song from a band self-described as ‘the sound of an 80s prom in a war zone.’ You would not expect this from a band located in Nashville, TN, but this is the sound of Palm Ghosts, who would be more at home in England a few decades ago. Dramatic, the track brings a post-punk/industrial vibe with lugubrious vocals and tribal beats. ‘Blind’ is the single of their new album ‘Lifeboat Candidate’ set to be released on March 19th. The album is a dark and dystopian effort, fueled by isolation and filled with confusion and dread, albeit with a bit of humor and hope. The song sets the tone for the album, as it is ‘about suspicion and paranoia standing in the way of truly seeing people, and consequently sounds like a comment thread of mired arguments over an underlying harmony.’

Powerlines – ‘Sober’: A multilayered track with rich textures of fuzzy guitars, light flashes of violin, steadily rising synths, and an insisting groove wrapping lead-singer Deanna DiLandro’s emotional and oppressed vocals. The song has the tempo of a bright anthem and is the single of Powerlines’ upcoming album, ‘all of this is temporary’, out on April 9th. ‘ The album explores themes of difficulty, pain, love, and the acceptance of ephemerality through an optimistic lens, and the ‘song explores how different types of addictions can interact with each other, but does so in a way that attempts to process them simultaneously, as the associated emotions and the attempts to break free of them remain a constant lyrical theme.’

Airpark – ‘Quiet Type’: A folksy tune performed with intensity, yearning vocal harmonies, and a blend of nervously strummed acoustic guitar and Americana violins. The song, featuring Valley Queen, is from the band’s upcoming EP, ‘Quiet Type: an Intimate Collection of New & Old,’ due out February 26th via Eugenia Hall Records. With this new work, Airpark has recruited a wide circle of partners, tapping frequent collaborator Scott Hundley as their producer and lacing the songs with contributions from upright bassist Byron House (Robert Plant, Patty Griffin), pedal steel guitarist Spencer Cullum (Miranda Lambert, Steelism), and guest vocalists like Erin Rae, Valley Queen, and Nightingail. The result is a record that stands in low-key defiance of the isolated feelings that permeate the COVID-19 era, while also highlighting the exploration and musical diversity at the core of Airpark’s work.

Warbly Jets – ‘Low Resolution’: A funky track with influences ranging from Prince to early 2000s hip-hop. This is the new track from Warbly Jets featuring Chris Greatti (YUNGBLUD, Poppy, Grimes) on guitar while the band used everything in the studio from a Korg MS-20 to actual chopsticks. ‘One late Friday night I was at the studio trying to write lyrics,’ explains Samuel Shea, ‘and there was a massive party happening in the loft next door. That crowd was spilling into the hallway and the sound was carrying into the studio. Normally that would bother me, but I remembered that a friend had told me when he did some sessions with Mike D (Beastie Boys) that he would hang an SM57 out a window in NYC and record street noise to use. Instead of telling them to be quiet, I thought why not hang a 57 on the doorknob of the front door to the studio and put them on the track! I recorded and layered a few ‘takes’ of the captured sound, and it ended up creating a feeling of being at a party that we loved.’ ‘Another cool moment was trying to get a really 70s tone for the drums,’ explains Shea. ‘We started by having Sam [Richard] play at an extremely low dynamic so we could crank all the preamps and compressors to really pump. We tried a few different sets of sticks and everything was feeling too loud. We ended up having him play with chopsticks so that it was impossible for him to play louder than we wanted.’

Madison Cunningham – ‘Broken Harvest’: A pure and fluid sound with Madison’s beautiful voice over an atmospheric and vaporous soundscape whose textures slowly grow in complexity and cool strangeness. The new song is part of NPR Morning Edition’s ‘Song Project.’ ‘I had worried for a moment that a song based on 2020 could be a directionless one to write. A year that left us all like a headless herd of chickens running around a farmyard,’ Cunningham explains, ‘it was easy to think it was only happening to you. To anyone with a dream, the feeling of being robbed of opportunity, growth, promise, or success, was incredibly abrasive. It wasn’t until after we lost my Grandma to a stroke back in August that I realized… we’ve always been faced with this. Loss is in the cards for us humans… Without sounding too casual about what this year stole from us, (some replaceable, some not), this gave me a shot of optimism.  Not because there’s light at the end of the tunnel, or because somehow all that we lost has been reconciled, but because maybe, just maybe, we’re born with the strength to deal with it.’

Peter Matthew Bauer – ‘Mountains on Mountains’: An evocative and throbbing chant for a quite stripped-down tune accompanied by drum skin beat and twinkling guitar; the result almost sounds like an ancient mystic chant you would hear in some strange foreign country around a large campfire; meanwhile, Peter Matthew Bauer said that the song perhaps references ‘the mid-’00s NYC scene and where it stands now.’ The Walkmen-founder and Fortune Tellers label head also added this about the song: ‘This is the first track of my own that I’ve recorded and decided to release in a long time. I’m not entirely sure how to explain it: it’s a pretty dark song about certain types of people and memories fading away. But it also has this feeling of no expectations, so it leaves me with a sense of optimism and presence in the end. Nick Stumpf and I started recording it for a fundraiser for Fairfight around the elections.  Later we decided to take this barebones live recording and make it into something more proper and special.’

Elise – ‘Bubblegum Brain’: A curious and fun hip-hop-inspired track sung with a sexy nonchalance by the emerging young pop star, while the visuals of the video are everything, and features drag superstar Shea Couleé, winner of RuPaul’s Drag Race All-Stars season 5. The video has already 170K views (while Elise’s songs have received over 100 million total streams across platforms) and besides the bubblegum pop sound, Elise shows her dark side with opening lyrics about personal disaster and feelings like ‘everything’s on fire.’ ”Bubblegum Brain’ probably has some of my favorite lyrics I’ve ever written,’ says Elise. ‘Sometimes I can go through something and the only thing I want to do is make a song about it. But other times, when things really mess me up, I need a while to process it. Once I feel like I’m out of the moment and I can see it for what it really was, I can write about it in a song and make it make sense to myself. ‘Bubblegum Brain’ is closure in that regard.’ The track is the first from Elise’s upcoming debut album, out later this spring, and her first as a signee of EMPIRE and SALXCO management.

Merlaku Ra – ‘Thankless’: A somber hip hop track delivered with an effortless flow, floating with determination over eye-catching visuals. I am not sure about the thorn crown but the inspiration for the rest comes from the 1985 photo of Eddie Murphy eating steak off of a woman’s back on top of a restaurant in Paris, France. In the video, the South Carolina native wanted to encapsulate the duality of the young artist as he sets the tone for the lane he is creating as a rapper. His debut album, ‘Wolves,’ released this past October via Guin Records, was met with high praise, and there is more to come from this young artist.