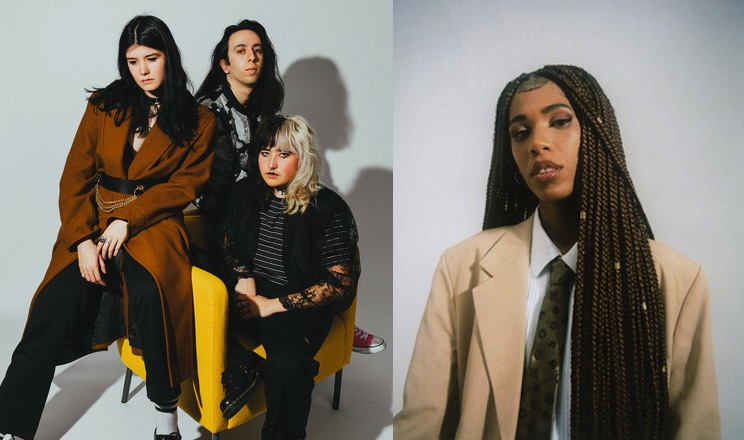 Destroy Boys and Yndi among the press releases from February

Samantha Crain – ‘Bloomsday’: An eerie folksy-Americana tune with dense arrangements, breezy vocals, and jangling guitars, achieving a ‘cozy lushness as if she were spinning a protective cocoon in which to retreat from the traumas that populate her songs.’ This is the new single from Choctaw-American artist Samantha Crain which comes with a video. She drew inspiration from her hometown of Norman, OK, through the idea of ‘vacationing in your own backyard,’ while explaining how the pandemic found her re-discovering the beauty of her hometown. ‘There were alleyways I’d passed every day that I’d never noticed, flowering bushes that I’d never glanced at, and craftsman houses with porch cats and gardens… parks I’d never walked to the center of, trails I’d never walked, public statues I’d never turned towards. I felt like a tourist in my own town.’ ‘Bloomsday’ is also the single from her upcoming EP, ‘I Guess We Live Here Now,’ out on April 9.

Adrian Younge – ‘Revolutionize’: The second single from the upcoming album ‘The American Negro,’ and a track mixing spoken-words, jazzy arrangements, vibrant strings, stamping beats, and poignant chorus composed by multi-Instrumentalist, composer, producer, and co-founder of Jazz Is Dead. ‘Revolutionize’ (just like the entire album that is out February 26) delivers an unapologetic critique detailing the systemic and malevolent psychology that afflicts people of color. ‘‘Revolutionize’ is a broadcast amplified by the struggle; a rebellion against America’s bigotry and complacency towards the plight of Black America,’ notes Younge. ‘We are beautiful and the harmony of our heritage is the soul of The American Negro — ‘Revolutionize how we see our lives.’’

Local H – ‘Winter Western’: A rebellious and grungy hard-rocking track featuring Juliana Hatfield and plenty of angry-raging guitars that keep coming back in a series of nervous and roaring waves. The song is accompanied by a video and is featured on the album ‘LIFERS,’ a concept album which also features a song entitled ‘Patrick Bateman’! ‘LIFTERS’ is the first album from Local H in five years, and it was released on April 10th, 2020 on AntiFragile Music; it features contributions by an array of respected friends and guests —including Juliana Hatfield, John McCauley of Deer Tick, and legendary rock engineer Steve Albini. ‘This might be a concept record about the end of the world. Or it might just be a party record with loud guitars and cowbells,’ Scott Lucas said.

Yndi – ‘Novo Mundo’: The new single and video from Franco-Brazilian artist Yndi who has just confirmed her debut LP ‘Noir Brésil’ set to be released on May 28. Part French pop, part Brazilian rhythms, this is a melancholic, string-heavy song with sultry vocals combining Afro-Brazilian percussion with French and Portuguese poetry. Under her first moniker Dream Koala, Yndi released EPs ‘Odyssey’ (2013,) ‘Earth. Home. Destroyed.’ (2014,) and ‘Exodus’ (2015,) as well as the popular single, ‘We Can’t Be Friends,’ gaining her international success and garnering multi-millions of streams across platforms.

Bonzie – ‘Reincarnation’: A clean guitar with a fresh and confident voice for an upbeat tune and a touch of nostalgia, the song is the title track from Bonzie’s highly anticipated upcoming album ‘Reincarnation.’ The record, due March 16, finds her in a period of self-reflection, treading unfamiliar musical ground as she considers a world poised for change ‘like the shedding of skin off a snake.’ Nina Ferraro’s (real name) most recent single, ‘Caves’ was featured on NPR Music’s All Songs Considered, and her debut single, ‘alone’ was deemed one of the Best Songs of 2020 by The New York Times’ Jon Pareles and has earned over one million streams across all platforms.

Destroy Boys – ‘Muzzle’: A punk riff and the spirit of anarchic American garage rock channeling a bunch of punk bands. San Francisco Bay Area’s Destroy Boys have released this blistering single through their new label partner Hopeless Records, and the music, which was produced by Martin Cooke (Death Cab For Cutie, Of Monsters And Men) explodes with aggression and energy, while the lyrics tackle feelings of being seen as disposable and subhuman, feeling out of control and taking your power back. It’s an anthem for the unseen, inspired by a toxic relationship where frontgirl Violet Mayugba was mistreated by a man she was in a relationship with. The three-piece band founded by Mayugba (guitar/vocals) and Alexia Roditis (vocals/guitar) are redefining West Coast punk, with the help of drummer Narsai Malik and their visceral personal tales of scene bullies, elitist cliques, betrayal, and unrequited love.

David Cook – ‘Strange World’: Stabbing synths for an anxious and cinematic pop song evolving into a symphonic forest of strings, described by David Cook as an ‘homage to this year.’ ‘Staring out of windows at the world outside, feeling disconnected from it, and trying to find those moments that would normally exist outside, inside,’ he said. This is the second single off his highly anticipated EP, ’The Looking Glass,’ set to be released on April 16. Although the songwriting and recording process began before COVID, the pandemic’s effects were felt throughout the process and are reflected in some of the songs.

Eddie Benjamin – ‘Running Away From Home’: A part-funky part-ethereal pop song growing into a dreamy dancefloor by this enigmatic singer, songwriter, producer, and multi-instrumentalist. The video, directed by Audrey Ellis (Rina Sawayama, My Chemical Romance), shows him stepping inside of a classic limo to dominate the frame with undeniable charisma and palpable charm. As the funky bassline thumps in the background, the visual juxtaposes vignettes of him ripping finger-style on the fretboard, rocking on the moon, and set down atop his retro ride to outer space. ‘’The ‘Running Away From Home’ video represents a time of personal exploration,’ Eddie told Paper Magazine. ‘It captures the experience of watching your soulmate go through something really difficult and wanting to run away and leave it all behind. I wrote this song through the perspective of that character. The visuals in the video portray the characters psychedelic world in which I’m able to find beauty, color, and explore a dreamy universe.’

Pino Palladino and Blake Mills– ‘Ekute’: An evocative instrumental by renowned bassist Pino Palladino and celebrated multi-instrumentalist and producer Blake Mills. The result is a percussive, jazz-fusion and experimentation with Afrobeat influences and a rhythmic language referencing cultures around the world from West African to Cuban music, funk, jazz, and English folk. The track is from their upcoming collaborative album, ‘Notes With Attachments,’ due March 12 via New Deal / Impulse! Initially conceived as a solo record for Palladino, the album quickly evolved into a fully collaborative work centered around the two artists’ love for experimentation. Palladino notes that ‘Ekuté’ began as an idea he had at home in London with drummer Chris Dave, a fellow ‘huge fan’ of Afrobeat pioneer Fela Kuti. ‘It just came from a one-chord jam that I liked the feel of,’ he says. ‘The next thing we did on it was in New York, with Ben Kane, an engineer friend of mine who worked on some of D’Angelo’s stuff. We had Marcus Strickland come in, who had the idea for that multitracked bass-clarinet horn section.’

Anna Akana –‘I Feel Nothing’:  An upbeat high-energy pop song with a video that reflects Akana’s unapologetic and uncompromising look at all the battles she’s faced throughout her life, examined through the rawness and heartbreak of a toxic relationship that was still fresh on her mind. This is the first song from her long-awaited EP ‘No Longer Yours,’ out now. ‘This EP is about the process of assembling the broken pieces and stitching them back together,’ Anna says. ‘It’s about the moment you finally see the person who used to make you nauseous and realize it doesn’t sting so much anymore. I had so much clarity about the things that weren’t working for me, what I had to let go of, and how I wanted to shape my life moving forward with more self-awareness about what was within my grasp to change.’