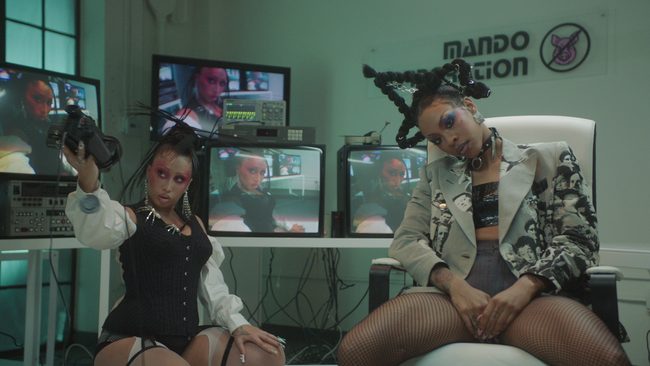 Mimi Webb – ‘I’ll Break My Heart Again’: Some unexpected raucous vocals which soar like a falsetto over an R&B piano-driven ballad with hopeful beats. This is the new anthemic single of UK singer-songwriter Mimi Webb, which was just released via Epic Records with a bucolic and romantic video: the cinematic visuals show Mimi awakening in a bed set under a leaf-less tree, looking like a fairytale heroine while singing, ‘Being with somebody helps, but if I’m honest with myself, I’ll break my heart again and tell him it’s the end’. Mimi had to say this about the single: ‘Writing this song came from a really vulnerable place of admitting the truth of where your heart belongs. You know it’s not right or good for you, but you can no longer convince yourself to stay away from the person you’re still in love with—even though you have something good going with another. It took me a long time to face it, but this song really helped me through that process.’ She will releases her debut EP later this year.

Kathleen – ‘August’: A quiet story-telling that Kathleen sings with breezy to eerie vocals growing into a passionate fire, while the melancholy of the melody reminds us more about fall than summer, as the title of the song would presume. The song is from Kathleen’s forthcoming EP Kathleen II, out October 9 via Let Me Know/Warner Records. ‘It’s been a long hard summer,’ Kathleen says. ‘It’s my hope that ‘August’ can be three minutes of the rest, reflection and catharsis we all need in order to keep moving and keep growing into the new world and out of the rubble we’re currently under.’ It’s an optimistic thought for this new songwriter who has already found inspiration in the uncertainty and chaos of this quarantine.

Baby FuzZ – ‘We’re All Gonna Die!!!’: A fun kid song with a very dark side. It plays like a pop-punk tune describing the unavoidable while making you jump on the bed for a pillow disheveled battle. This is a new song by Austin Texas by way of Los Angeles artist and provocateur Baby FuzZ, a very tongue-in-cheek pop-punk track from his upcoming concept album due out this fall. ‘Not to be a total downer,’ Baby FuzZ told The Noise, ‘but we’re all gonna die. Eventually. Oh well. Life goes on. Make the most of it and don’t be an asshole.’ ‘We’re All Gonna Die!!’  is the second single from Baby FuzZ’s forthcoming sophomore album ‘Welcome To The Future,’ it follows ‘Weekend Blues,’ the jangly mariachi inspired emo-pop song released in June. All proceeds from ‘We’re All Gonna Die!!’ will be donated to Doctors Without Borders.

Kali Uchis – Aquí Yo Mando: Grammy and Latin Grammy-nominated artist Kali Uchis has shared a new track, ‘Aquí Yo Mando’ featuring Rico Nasty, a hip hop track in Espanol with an impressive video directed by Phillipa Price, which will surely bring everyone attention whether you understand the lyrics or not. The colorful project exults sexuality and sensuality while the title’s meaning, ‘Here I Command,’ may reveal about the women’s intentions: They are gently taking control of the situation, as both Uchis and Rico Nasty force men to succumb to their demands. ‘To my fans & new listeners; I pray this song makes you feel tasty & powerful, thank you!’ says Uchis. The song, produced by Tainy, is from Uchis’ forthcoming second studio album, which is her first Spanish language project.

Saunder Jurriaans – ‘Easy Now’: a clapping indie-folk sound with emotional guitar, vulnerable vocals, and strings picking up the emotion, while the inventive melody steps into uncharted and melancholic territory. The cinematic video, shot in Springs, NY by Brady Corbet (Vox Lux, The Childhood Of A Leader) features award-winning choreographer Celia Rowlson-Hall (Alicia Keys, MGMT, Chromeo, Vogue, Vanity Fair, Glamour and more) dancing at 60 mph on the back of a truck just down the road from Jackson Pollock’s house where he passed away in a 1956 car crash. ”Easy Now’ was originally written as sort of an anthem to get myself out of a dark place,’ Jurriaans says. ‘Now it seems like it could speak to everything going on around us in the world. It’s about stepping back from the whirlwind of uncertainty and darkness, taking a pause – and a breath – and seeing it for what it really is.’ Saunder Jurriaans (The OA, Ozark, The Outsider, The Rental, and more) will release his solo debut album titled ‘Beasts,’ on Friday, September 18 via Decca Records.

Stunna Girl – ‘Lil Boy Cash’: A aggressively sexy hip hop song with the high pitch vocals of this 22-year-old who swept TikTok off its feet last year. She visibly shows plenty of confidence and tenacity that befits her go-getter attitude, ‘Lil Boy Cash’ is meant to be as dismissive as it sounds and has already called a potentially lethal anthem. The video reveals the Sacramento native’s hunger and defiance, not afraid to show to her peers she has already the presence of someone that’s been here before. ‘I’m a threat!’ she declared. Following a challenging incarceration period as a teenager, Stunna Girl is ready to take her wisdom and hunger and manifest it into a successful career.

Lasse Passage – ‘Heartbeat’: This is the new single from Oslo-based, indie-folk artist Lasse Passage, and the second single from the upcoming album, ‘Sunwards.’ Lasse composes light music floating into thin air, driven by a shimmering fingerpicking and soft vocals and enhanced by Noah Georgeson’s (Joanna Newsom, Devandra Banhard,  Norah Jones) warm production and buoyant arrangements. The song works like an uptempo slow burner, and is described as ‘a quirky love song, about that realization that the other person is physically affecting your body too, even the tempo of your heartbeat.’ On the track, Passage says, ‘It was one of the first songs I had ready, and one which I initially thought could be the start of an album. We recorded the rhythm section in the studio, but later spent a lot of time doing overdubs, slowly building up layers and headhunting musicians which we thought would bring the right elements to the production.’ Sunwards is due out August 28th, 2020 via the Norwegian experimental label Sofa Music.

Avawaves – ‘Mulholland II’: British duo AVAWAVES (formerly known as AVA) return with a new video and recording of their track ‘Mulholland II,’ off their debut release ‘Waves,’ which was released in February via One Little Independent (Björk, Poppy Ackroyd). The classically-trained pair, Anna Phoebe and Aisling Brouwer create an immersive atmosphere with ambient soundscapes based on the intricate interplay between violin and piano. But they can rock too as the music becomes animated when the piece grows into an emotional catharsis. ‘I’ve always toured and played live shows, so it feels very different to be confined to working on your own in the studio. I’m enjoying this time of intense focus,’ says Phoebe of the current global crisis. ‘It’s been a time of artists and composers reaching out to one another and really cementing a feeling of community. Aisling and I had a week together in January writing tracks for our next AVAWAVES album, which has given us a strong basis to now work remotely together.’ ‘A lot has happened since the first album, and it’s changed and shaped the way we write and perform together—I am genuinely stoked for the next phase of our collaboration,’ adds Brouwer.

Widerman – ‘Cope Trip’: Inviting beats and lazy vocals with a touch of irony and humor. It’s not supposed to be taken too seriously and bouncing exotic synths may make you dance during a summer afternoon. On the track Wilderman explains, ‘When it comes to the pandemic – we are all over it. We need to take a trip from time to time, in order to cope. Whether that be IRL, on a screen, or in our brains. For me, making this song was my own escape during the lockdown. Hopefully, it does the same for you. ps. please just wear a mask and keep standing up for BIPOC. #blacklivesmatter.’ The video illustrates this warm beachy feeling at the top of pure white sand, while the chorus may stick with you.

Young, Planetary – ‘Dig’: A propulsive track with steady drums, multi-voice punk harmonies, and few cathartic screams blending with voices. This is a track off ‘Locations I Can’t Place,’ a new EP by Young, Planetary, a band from Boise, Idaho, and released via Hidden Home Records. The band said: ‘From our band to you, all we ask is that the first time you listen to our record, you listen to it with the volume cranked. You bump that shit like you’ve never bumped anything before. You learn all the fucking words and you scream them as loud as you possibly can. Because right now we could all use some relief. We could all use a chance to breathe and heal and, for the lack of better words, break some shit. We know the world is on fire, and it’s going to burn for a long, long time. But, for now, all we can do is come together as a community and fight harder than we have ever fought before. And we sincerely hope that these silly punk songs of ours can inspire you to live to fight another day.’