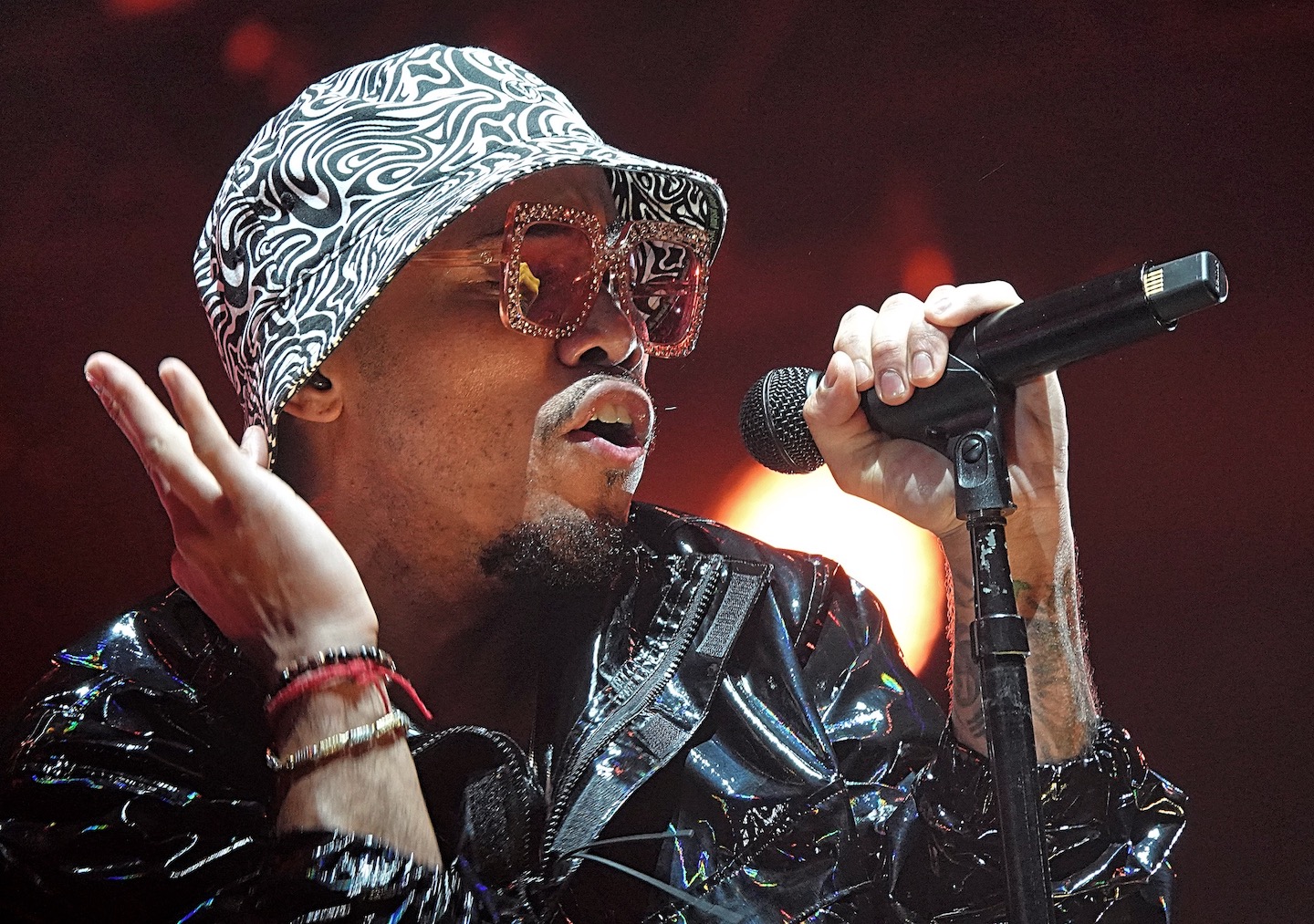 Anderson. Paak among the press releases from August

A new 5-track ‘Lockdown’ remix bundle by Anderson .Paak and songs from Africa among these new press releases from August

Kate Bollinger – ‘Feel Like Doing Nothing’: A lazy languid hazy-sunshine song with Kate Bollinger’s dreamy vocals over a nonchalant smooth jazzy pop melody, meanwhile the video looks like a weird dream you may experience during a feverish afternoon. The song, a quiet ode to procrastination, is a chill tune that brought up a comparison with Feist and Maggie Rogers, and the latest single from Kate Bollinger’s forthcoming EP, ‘A word becomes a sound,’ due August 21st via House Arrest. Bollinger explains: ‘By now I know that I am happiest when I’m keeping myself as busy as possible, but with that, I always seem to make the same mistake again and again, which is trying to do too many things and wearing myself down. This song was written at that point, it’s meant to feel playful and like an abandonment of all responsibility, but it’s also supposed to feel a little uneasy. It’s a song about avoidance and escapism at its heart.’

Psychedelic Porn Crumpets – ‘Mr. Prism’: A very upbeat buoyant chaos of jubilant sounds with a psychedelic Beatlesque experimental vibe at times. The song keeps a colorful appeal with its mini guitar solos, irresistible rhythms, and some maximum level of energy. ‘Mr. Prism’ was born out of the feverish haze only illness and a crazy tour schedule can bring: ‘After our last tour of Europe I had a plethora of reasons to see a doctor,’ says Jack McEwan. ‘First, he thought I had tonsillitis, so prescribed me penicillin, which didn’t help at all. I did Falls Festival over New Year’s and barely got through – turns out I had pneumonia. I was pushing through on all sorts of meds until someone offered me the HMS Hunter alternative and I realized no matter how I’d ever been, I could never turn one down. Mr. Prism (my sickly fun-fuelled fiend of an alter-ego) was born.’ This is the band’s new single, released via Marathon Artists.

Steven Moses – ‘Lose It’: A honest and wordy song hurrying up into rap delivery with melodic hooks, and lyrics fueled by bad relationships, drugs, and money problems. The acoustic version of the song is channeling Moses’ real-life struggles through a simple acoustic guitar delivery and direct storytelling. ‘I feel like I have to go through a day or a week of life and experience to write,’ Moses says about his process. ‘Maybe there’s somebody you wanna say something to but you couldn’t actually say it to them in those words, so you can put it in a song,’ he explains. ‘[Someone] could not have the same thing going on like it’s something completely different, but because everybody has a similar set of emotions and field of emotions, they can relate to whatever they’re thinking [my song] is about.’ With his Going Nowhere Fast collective, a group he formed with his friends around their creative talents and collaborative potential, Steven Moses wants to build a sustainable future for his friends as well. ‘What would have happened if Kurt Cobain could have been Bob Dylan’s age? I think about that and I’m like, I can’t be another one of those, I want to be around to watch this shit happen. I’m going to be around to watch this shit happen.’

Bear’s Den + Paul Frith – ‘Napoleon’: A symphonic track with strings, keys, horns, and emotional vocals building layered harmonies and a widescreen production going crescendo. This is a reimagined track of a new album, ‘Fragments,’ and a collaboration between acclaimed U.K.-based band Bear’s Den and renounced composer/arranger Paul Frith (The xx, Radiohead), set for release on September 18. You can watch the video filmed during the sold-out premiere of ‘Fragments’ at London’s EartH in September 2018. ‘Napoleon’ is in fact the final track of their 2016 album ‘Red Earth & Pouring Rain,’ but the song has been here completely re-worked by Frith who also plays trumpet. Of the project, Andrew Davie of Bear’s Den says, ‘Fragments was an idea born out of our friendship and numerous collaborations with Paul Frith over the last 10 years. On every record we’ve ever made, Paul has come in and recorded beautiful horn arrangements and helped to push our songs into a more orchestral and cinematic landscape. The idea for Fragments was the idea of both Kev and I letting go and entrusting Paul to break our songs into pieces and build them up anew, focusing on different aspects to them, finding ideas perhaps overlooked before and by writing whole new orchestral arrangements around those fragments of ideas. The hope was that Paul’s new arrangements could shed new light on the songs, bending and refracting and in turn cause different reactions in the music and stir different emotions in the listener… To me, this project is about accepting your own fragility and accepting those cracks in order to find new ways to move forward and rebuild. We feel truly honored to have been able to work with Paul and the incredible players he assembled and cannot wait for you to hear these songs that are all both old and new, broken and renewed.’

AGCLUB – ‘HNGOVER’: A rap song over an eerie gospel soundtrack and soulful choruses, it is as if ASAP Rocky got mixed with Brockhampton. The track, filled with meditative, lo-fi hip-hop beats, is from the AG Club’s debut album ‘Halfway Off the Porch’ released earlier this year. ‘I think when we made that song it was about that moment where you are trying to convince yourself to continue,’ says the group’s main writer and rapper Jody Fontaine. ‘You question a lot of shit and you’re looking at a lot of shit and there are so many times when you feel hope isn’t an option and you’re like fuck it. But you gotta continue cause you’re trying to get out of the bucket. Remembering what the point of everything is.’ The band has now released a video for the song that you can watch here.

Wingtip – ‘Demons’: A finger-clap type of song with a copious touch of R&B and an indie-pop sensibility going into catchy choruses. Wingtip, aka Nick Perloff-Giles, will release his debut full-length album ‘All Your Friends Are Here’ on Friday, August 14 via Independently Popular. Perloff-Giles notes, ‘It’s a song with a really straightforward sentiment about opening up to someone, but I wanted to make it feel personal and specific. The sonic challenge of the song was about keeping only exactly what was needed while still keeping it sounding full… It was the beginning of the transition away from the busier electronic stuff I worked on earlier.’

Anderson. Paak – ‘Lockdown Remix featuring JID, Noname & Jay Rock’: A smooth blend of R&B, jazz swirls, wobbling keys, and hip hop parts provided by JID, Noname & Jay Rock, wrapped in all the coolness of an Anderson. Paak track. It is a meditative song about the recent Black Lives Matter events and Paak’s participation in the protests where peaceful protestors were being shot with rubber bullets by the police. The video, released on Juneteenth, was directed by Dave Meyers and was featuring Andra Day, Jay Rock, Syd, SiR, Dumbfoundead & Dominic Fike. The cast & crew who participated in ‘Lockdown’ donated their salaries to Black Emotional and Mental Health Collective (BEAM), Dream Defenders, and Color of Change, and Anderson. Paak House foundation made a charitable contribution to bail funds across LA, NY, and Atlanta. This 5-track ‘Lockdown’ remix bundle includes instrumental, acapella, and this official remix among others. It arrives today via Aftermath Entertainment, exclusively distributed by 12Tone Music, LLC.

Lewis Del Mar – ‘TV’: A sensible and evocative bright pop song by New York duo Lewis Del Mar with exotic, almost Brazilian, rhythms and soulful vocals. ‘Much of the ethos behind Lewis Del Mar is rooted in the practice of collage, and ‘TV’ touches on this concept from two angles,’ Lewis Del Mar says. ‘First, the lyrics are a societal stream of consciousness that weave a haywire line through disparate scenes and ideas: the water cycle, call centers, crowded subways, my mother’s voice. The song seeks connection in chaos, much like scrolling, flipping the channel. The recording itself is also its own collage. The drums, vocals, and guitar were recorded live in the room, while the synths and samples were programmed around this foundation to invoke the saturated and layered sensation of over-consumption that we’ve all grown accustomed to.’ The new track is from Lewis Del Mar’s forthcoming sophomore album, out August 21 via FADER Label and it comes with an interesting collage video.

Nasty C – Palm Trees: Nasty C, aka Nsikayesizwe David Ngcobo, has been called South Africa’s hottest rapper and best bet for a mainstream crossover. This new high-energy song comes with a dark video and stunning visuals, featuring a commending and triumphant Nasty C at the top of his game, with some unexpected fluctuations in his flow. He has been pursuing his hip-hop dreams since childhood when he began rapping and learning to lay down tracks at age nine under the tutelage of his older brother.  At just fifteen, Nasty released his debut mixtape, ‘One Kid, A Thousand Coffins’ (2012).  He shot to stardom in 2014, with his boundary-breaking second mixtape, ‘Price City,’ and ‘Juice Back,’ a continent-wide instant classic smash.  The ‘Juice Back’ remix featured Nigerian muso, Davido, and South African rapper Cassper Nyovest. This early success won Nasty C the Best Freshman prize at the highly competitive South African Hip-Hop Awards. In July, Nasty C teamed up with DJ Whoo Kid to put together a mixtape for fans around the world. The musical masterpiece titled, ‘ZULU’ features the hit track, ‘They Don’t’ includes his first-ever collaboration with Tip ‘T.I.”’Harris for ‘They Don’t,‘ a powerful track created by the rappers in the wake of global unrest over rampant police brutality and racial injustice. He will release his highly anticipated album ‘Zulu Man With Some Power’ on August 28 via Def Jam Recordings.

Yemi Alade – ‘True Love’: An African sunshine with clapping sounds and dance-inviting rhythms while her vocals bring plenty of colors in this modern-Africa song. This is a new track by Award-winning Nigerian superstar Yemi Alade who recently appeared in Beyoncé’s Black Is King, performing her two contributions to The Lion King: The Gift, ‘DON’T JEALOUS ME’ and ‘MY POWER.’ She is the new queen of Afro-pop, with upbeat booming productions while she has already collaborated with a number of global stars from Angelique Kidjo to Rick Ross. She won the MTV Africa Music Award for Best Female twice in 2014-2016 and was a two-time nominee for Best International Act at the BET Awards and the MOBO Awards, while her breakout single ‘Johnny’ made her the first African female artist to earn over 100 million views on Youtube and Vevo. Watch the video for ‘True Love’ here.