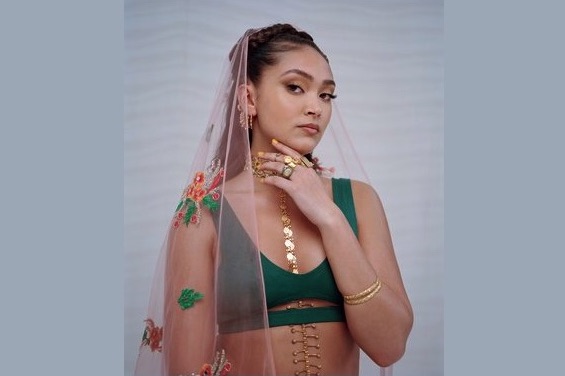 Mei River – ‘Peter Parker’: A R&B-ish track du jour, the sort of music I never listen to, but I am not a reference for this style of music. In any case, kids love it. It’s an upbeat and almost sweet track described by the author as a song ‘about issues with alcohol, prescription drugs and losing your mind, but put in a fun vibe.’ Born Fredrik Eriksson, Mei River is a Swedish vocalist, multi-talented singer, and producer with a forthcoming debut EP called ‘Tall Trees That Never Fell.’

Angela Muñoz – ‘In My Mind’: A very low jazzy reverie with a strong R&B vibe. The very young Angela channels the jazz classic singers, and her style has been described as soulful (of course), elegant, hypnotic and mesmerizing. She is perfect for the lovers of old soul jazz singers with a classic sound. Muñoz will release her debut album Introspection, produced by multi-instrumentalist and label head Adrian Younge on June 19 via Linear Labs.

John Lindahl – ‘Lies’: Another R&B singer-songwriter discovered by Justin Timberlake (and it shows) with also a background in dance. I listened to two songs, ‘Honest’ and ‘Lies,’ of his debut album, ‘OPENING NIGHT,’ which ‘expand on the theatrical themes of love, jealousy, deceit, and redemption.’ ‘Lies’ is an R&B dancefloor with a hip hop delivery, the exact style of club-ready music made in series by labels these days. Lindahl has also appeared on multiple Logic’s tracks, such as ‘Flexicution’ and ‘AfricAryan.’

Loote – ‘Somebody Else’: Duo Loote, which consists of Jackson Foote and Emma Lov, is set to release the EP ‘heart eyes’ on April 24. ‘Somebody Else’ is another soft pop song with R&B-ish vocals, expressing the positives of love, and I don’t have much to say about this song except that the duo has averaged more than 8 million monthly listeners on Spotify with previous work. Jackson also co-produced and co-wrote Zara Larsson’s ‘Ruin My Life’ while the duo collaborated with David Guetta and Brooks on the 2019 smash hit ‘Better When You’re Gone.’ So you know where they are coming from.

Iris Lune – ‘Lune’: Change of pace and style with this Brooklyn-based artist, and an ethereal to melancholic song exploring ideas between love and loss. The melody is delicate and evocative indie pop with plenty of pathos and some Radiohead-ish soundscapes, whereas the press release says that this Israel-born artist has a ‘rich sonic tapestry anchored on Meir’s palpable mystique and limitless sonic mood board, which includes nods to the nearby countries and regions of her youth, including Egypt and Northern Africa, Russia, Turkey, and beyond.’ She has a debut album called ‘lovelosslove,’ due out June 5th.

Eddie Benjamin – ‘F#ck My Friends’: A fun and heavily autotuned track (but they all are these days) in the Bieber-Timberlake tradition with a touch of funk – I actually like the last 20 seconds of the song and its bass-heavy snoring jazz beats. Australia-born Benjamin is now a Los Angeles-based singer, songwriter, multi-instrumentalist, and producer who personally played every instrument on the track. He is also described as the ultimate ‘secret weapon’ for some of the biggest superstars and powerhouses in the world as Diplo, Meghan Trainor, Ryan Tedder, Sia, Labrinth, and Justin Bieber, who dubbed him ‘the next generation.’

FRND CRCL –‘Loose Cannon’: Some pop-punk for a change with these Green Day wannabes,… Who wouldn’t want their success? The vocals are in your face, the guitars are roaring but the song is much slower than you would expect despite the power-chord all-harmonies chorus, while the band is not afraid to incorporate lyrical wordplay, occasional pop culture references, and influences from various genres across the board. Their upcoming album ‘Internet Noise’ will be out on May 1st.

SayWeCanFly – ‘anxxiety’: SayWeCanFly is the moniker of Canadian musician Braden Barrie, and the song is an emo-pop hip hop track à la Lil Pump? I am the last person to ask, but it sounds like this dark depressing stuff that speaks volumes to kids. The proof? SayWeCanFly’s previous fan-funded LP’s ‘Limitless’ and ‘Beautiful Mess’ debuted on the Billboard Heatseekers Chart at #13 and #16, respectively. Not too bad. His next 12 new songs will be released in the weeks and months ahead via his new partnership with We Are Triumphant/The Orchard.

Lizzy & the Triggermen- ‘Dance Song (for the End of the World)’: What about a 10-piece swing band for a retro piece? The track is old-fashioned but so much fun with horns and a crazy swing moment for an infectious dance party by ‘one of the hottest swing bands in LA.’ They also have a great Global Quarantine music video for the song, because we all need something like this during these scary times.

Lonr., H.E.R. – ‘Make the Most (featuring H.E.R.)’: The track features the soulful voice of H.E.R. so if you are a fan, I guess you will appreciate this pop tune with its consistent groove, fluttering guitar, and emotional to yearning vocals. It’s a vulnerable and sweet romance but not much than that. However, if you like it, Lonr. Will release his debut EP, ‘Land of Nothing Real’, on April 24th.

Neumodel – ‘Faster’: A dark dancefloor with an R&B falsetto, and shades of electro-rock. Neumodel is a French electronic duo blending industrial rhythms and ethereal melodies and the song oscillates between radio-friendly hooks and dance-y experimentations. It takes some nerves to call a debut album ‘Rock’ but this is what they did, and it will be out on April 17th.

Zayde Wølf – ‘I Got You (End of the World)’: A radio-ready track described as the ‘dark rock child of Imagine Dragons and The Black Keys.’ That’s a bold and weird comparison, and if I don’t get the Black Keys reference at all, I recognize too well this generic pop sound with that extra layer of noisy buzzing EDM-ish electronica. No doubt that Zayde Wølf is a success with 203K YouTube subscribers, 63 million views, and music which has been streamed over 25 million times.

Suburban Living – ‘Glow’: A post-punk synth-driven track with eerie vocals which, according to guitarist-vocalist Wesley Bunch ‘taps into that feeling of being happily lonely.’ The press release says that the song captures moments from his childhood where he didn’t have a phone or felt like he had to interact with anyone, and there are real touches of nostalgia in this loud booming track off the band’s upcoming album, ‘How to Be Human,’ out on August 28th via EGGHUNT RECORDS.

Maren Morris – ‘The Bones’:  A Texas Grammy-winning artist songwriter who is on the radar of many people, especially with this song going #1 on the Billboard Adult Pop Songs and Mediabase Hot A.C. charts. Maren Morris sings and effortlessly soars with an emotional powerhouse over jagged rock guitar, and even though critics mention her deep and respectful country roots, this sounds like pure pop to me. ‘The Bones’ is a single of her critically acclaimed album ‘GIRL’ which broke the record for the largest ever debut streaming week for a country album by a woman, with 23.96 million streams in its first week.

Cup – ‘Hideaway’: A loud and rousing track from garage-psych rockers Cup, with a sense of fun and a will to make people happy included. There’s a sort of surf music piercing in the heavy riffs, while the tone is dark and super dynamic so you get the sense that the quartet is multi influenced. This is the second single from their upcoming album ‘Nothing Could Be Wrong’, due on May 8th.

Joy Crookes – ‘Anyone But Me’: This 21-year-old singer of Bangladeshi and Irish descent has gained plenty of recognition from many major outlets, from Vogue to The Guardian and the Fader. Joy Crookes’ voice is noticeable, delicate, warm, and rich, a sort of Hindu Billie Holyday who sings with nuances and confidence about a very personal topic over a pop melody. Her name has already appeared on major industry top lists at the beginning of 2020, from the BRITs Rising Star Award shortlist to Amazon Music, Youtube Music, and others

Alexander 23 – ‘IDK You Yet’: A heartfelt guitar song ‘about feeling a void in your heart,’ as described by the artist. The emotion of the song is reinforced by the layered vocals and the delicate sweetness of the melody. ‘I think especially with everything that’s going on in the world right now, people are feeling incomplete. I know I am,’ said Alexander who has a penchant for spontaneous songwriting and thoughtful lyricism. To date, his music has received over 56 million streams and more than 4 million monthly listeners on Spotify.

Kacy Hill – ‘Porsche’: The Phoenix-born, Los Angeles-based artist Kacy Hill has an ethereal voice and in ‘Porsche,’ an aerial electro-pop track, she sings about her inner thoughts: ‘It is me telling myself to shut up and get out of my own head and stop thinking the world is against me,’ Hill explains. The song is from ‘Is It Selfish If We Talk About Me Again,’ her forthcoming second album slated for release on June 19th.

Hayfitz –‘Kitchen’: With a super emotional and barely palpable whisper, NYC-based Hayfitz relates to today’s current situation, making the song the perfect quarantine reflection: ‘It’s oddly coincidental that my song about being unexpectedly trapped in a kitchen is coming out during a time where we now all find ourselves in isolation, without having planned for it. We’re finding expedited and deeper connections with those who we’re sharing our small spaces with and being forced to adapt immediately to this new way of life.’ ‘Kitchen’ is the third song released from his upcoming album ‘Capsules,’ due out May 29th.