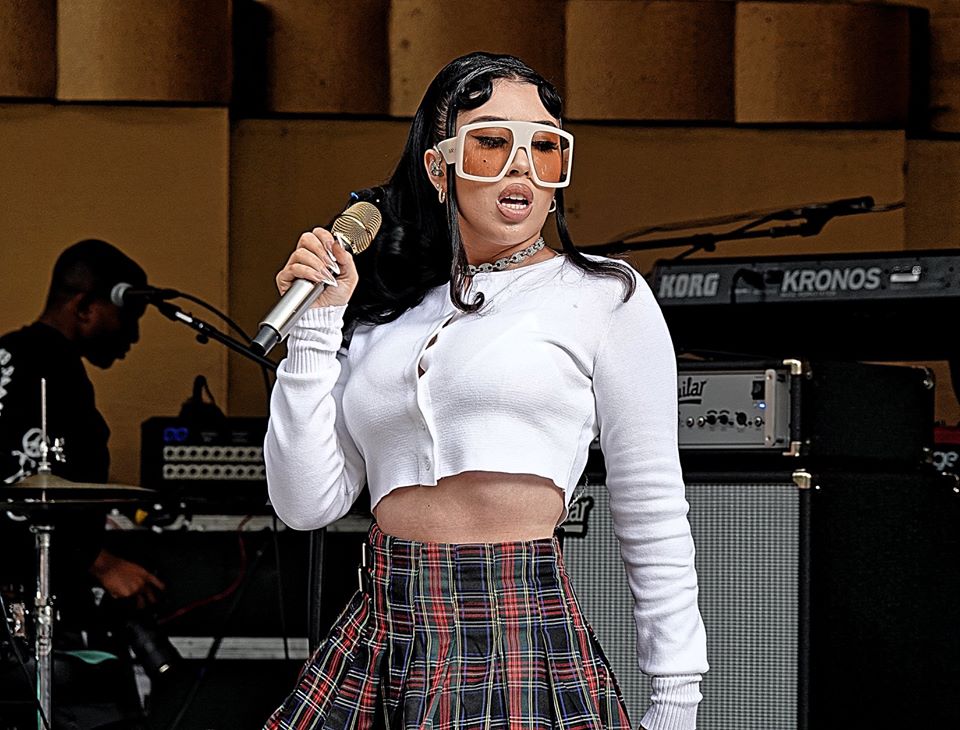 Kali Uchis: among the press releases from April

Plenty of women in this series of press releases from April, from the ferocious Destroy Boys to the sweet sounds of KIITA, Kali Uchis, Kathleen, and Ella Vos.

KIITA – ‘Thinking About You’: a dynamic style fusing with ethereal guitars, glitchy production, and whisper-like sweet vocals by a new 17-year-old alternative pop songstress from Columbus, OH. KIITA said to be inspired by everyone from Ozzy Osbourne and Nirvana to Madonna and Selena Gomez, but, of course, this song will bring her closer to Selena than everyone else on this list. The track comes from her new EP, ‘BAYARD THE BLOODHOUND,’ named after a character in Alice in Wonderland.

LONR. ‘Make the Most (featuring H.E.R.)’: The song is a dreamy yearning whisper while shimmering and sparse strumming guitars provide a rather sad atmosphere for a duet with the very popular H.E.R.. The song, which delivers the expected hook, comes from LONR (= Land of Nothing Real) debut EP, also named ‘Land Of Nothing Real’ via Epic Records, while the 7-track project also features a collaboration with 24kGoldn. You can watch the official music video for ‘Make the Most’ HERE.

Alaina Castillo – ‘Just a Boy’: A heartfelt and stripped-down tune which showcases Alaina Castillo’s beautiful range and show-stopper voice which should propel her to stardom very soon. The song comes from her new EP, ‘the voicenotes,’ which she has described as ‘a vulnerable step into overthinking, stressing & learning to let things go.’ Since she was raised in Houston and is now based in Los Angeles, Alaina Castillo sings in both English and Spanish, and the Spanish version of the EP is set for release on May 22nd.

GUM – ‘Don’t Let It Go Out’: An engaging sunny track with sparkling ‘70s guitars and memorable harmonies ending in a triumphant mood, during a bright and powerful crescendo that could bring to mind the Flaming Lips. GUM, aka Jay Watson (Tame Impala, Pond), said ‘Don’t Let It Go Out’ to be ‘about our modern desire to capture or record and keep every moment. The ease, not only to do all this but then to lose it forever down the track inspires and disturbs me.’ GUM will release his fifth studio album ‘Out In The World’ on June 12th via Spinning Top Records.

Trouble, City Girls – ‘She A Winner’: A fast flow over an explicit, part anxious and part comical, rap track, and a hot dialogue between the trap rapper and City Girls. With a song which has capped over 24 million global RTD streams and a video netting over 7 million views, Atlanta rapper Trouble, who has won the admiration of Drake, the Weeknd, Young Thug, Yo Gotti, and Waka Flocka Flame, has just released a second album, ‘Thug Luv,’ via Def Jam Recordings. This track is not for the children’s ears,… although who knows these days!

Kali Uchis – ‘To Feel Alive’: A song from the pop sensation’s new EP, which is a collection of demos she made during her time in quarantine. The ethereal tune swirls around Kali’s unique voice which seems to breathlessly run after the very simple instrumentation of the song and the sweetness of the backup voices. ‘I hope I can offer some solace to you with this EP I’ve put together in my room in quarantine, and I can’t wait to share my real album with you soon,’ said Kali Uchis about this release.

Sweet Crude – ‘Officiel//Artificiel’: Mixing dub, beats, percussions, synths, falsetto in polyphony and lyrics in English and French, this song is the title track of the new album by Sweet Crude, a New Orleans-based group. Recorded by Sonny DiPerri (Animal Collective, Portugal. The Man, Trent Reznor, My Bloody Valentine, DIIV), the track, at the image of the album, seems to be the work of free and evolving ideas, an amalgam collage of feelings by six musicians. ‘It’s never one sound, and there’s always all of us in every song. Every song feels like it’s been some collaborative splatter painting,’ declared keyboardist Jack Craft. Vocalist and drummer Alexis Marceaux also explained: ‘The whole record is about trying to find your authentic self. Stripping yourself down and realizing what other people and society tell you to be, and what you actually are. And each song tells that story in its own little way.’

Destroy Boys – ‘Honey I’m Home’: A pop surf punk song that could have only be written by a Californian girl. The tune is also absolutely perfect for this moment as the song is about feeling trapped… at home. You can hear a bit of that Best Coast/ West Coast punk vibe with a pure teenage grind led by the singer Alexia Roditis’ sarcastic tone. The song is the latest single by this San Francisco Bay Area trio which were scheduled to support Against Me! This spring. But of course, the tour was postponed.

Kathleen – ‘Asking the Aspens’: Kathleen has a crystalline voice reaching pure heights during a heartfelt tune produced by Noah Conrad and Ariel Rechtshaid (Adele, Beyoncé, Vampire Weekend, HAIM, Kelela) and haunted by beautiful imagery anchored in nature. ‘I’d been thinking a lot about how the Aspen trees in my hometown grow,’ explains Kathleen. ‘How sometimes, Aspens grow from seeds, but usually they shoot up from the root system. So a lot of times, an entire grove could be just one tree, shooting up hundreds of little trees from its roots below the ground for tens of thousands of years. The image of a boy growing out of the root system kept coming to mind. Truthfully, I don’t fully know what it means to me, but the line wouldn’t budge so I had to just trust it.  The rest of the song was pulled out of two of my poems, called ‘Gravity in Water’ and ‘She is the vascular system of a love song.’ The song comes with a video that you can watch here.

Ella Vos – ‘Burning Bridges’: With a tune which is all electro beats and high-pitch eerie vocals, Ella Vos delivers a serious message as the song is ‘a feel-good song about healing from the past and taking care of yourself.’ The video which comes with it (and you can watch it here) shows Ella returning to her ‘past home, AKA a traumatic memory, and literally, dance it off.’ It’s both a light tune and a cathartic experience, and it is from her highly anticipated second album, ‘Turbulence.’