PRESS RELEASES FROM APRIL 2020: HERE ARE THE ARTISTS 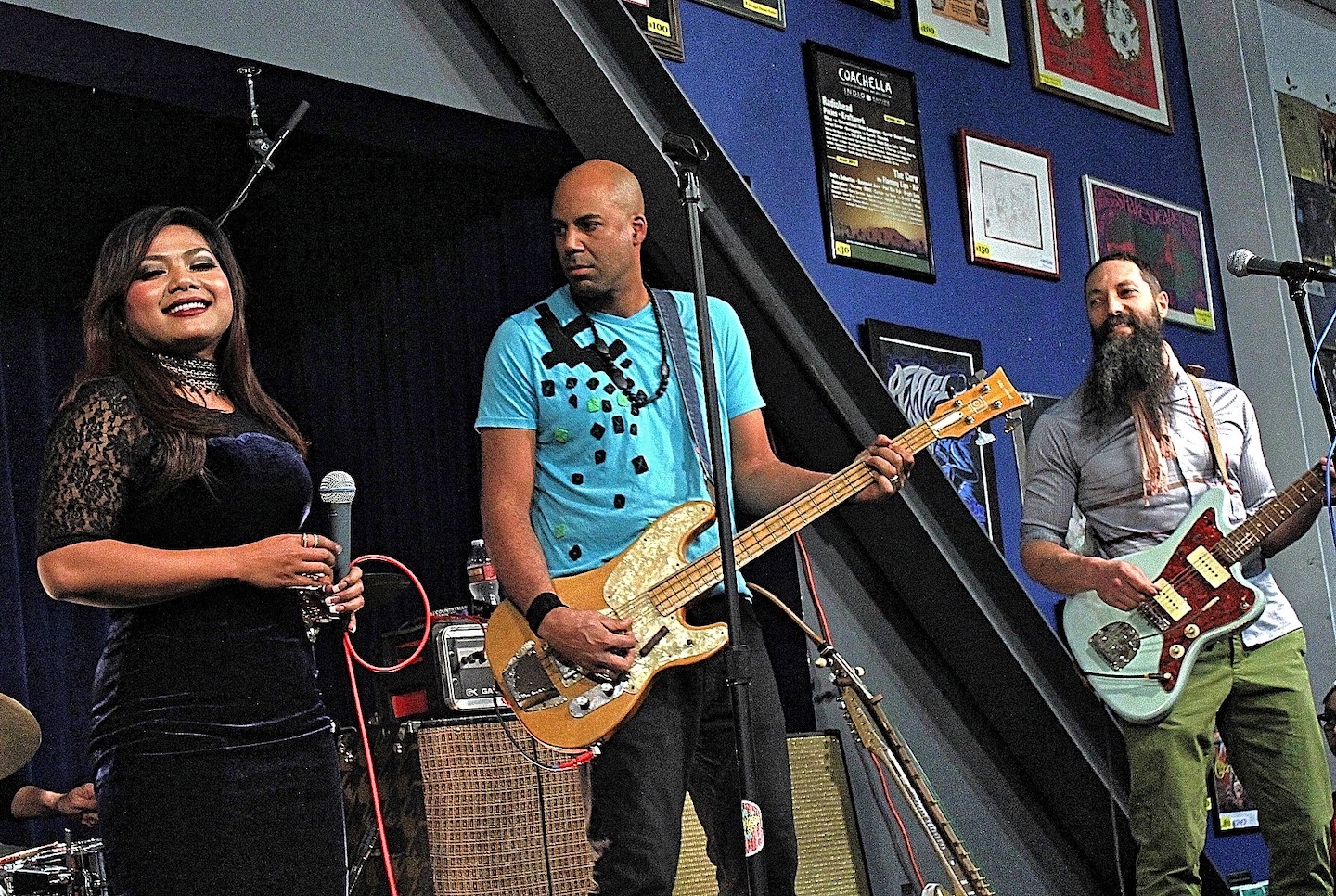 Another series of press releases from April with pop, rock, rap tracks including a Polish band, a masked rapper and a Cambodian Rock Band.

Til Morning –‘Okay’: Power chords for this upbeat life-affirming pop-rock song by brothers Devin and Patrick Parker, along with Danny Wrenn and new member Mickey Molinari. It’s a bright and energetic anthemic sound, slightly punk-influenced turning into, ’a sing-along custom-made for the sunnier days ahead.’ The Chicago band has already garnered airtime across the U.S. and has played sold-out shows with The Ataris, Allister, Mest, and Lucky Boys Confusion.

DELANILA – ‘The Philosopher’: London-born composer, singer and guitarist DELANILA (Danielle Eva Schwob) sings with determination like a new Natalie Merchant meets Madonna while this pop-rock synth-track becomes somewhat experimental and crashes into chaos in the end. The production is grandiose with a muscular quality and the song will be featured on DELANILA’s forthcoming debut album, ‘Overloaded’, which is set for release on May 1st. The album is described as ‘a reflection on the innate tension between humanity, technology and the strange connected-yet-disconnected lives we all live today’, and is orchestrated and performed by Schwob on a wide range of instruments with also contributions from Grammy-winning engineer Emily Lazar (Beck, Sia), programmer Pearse MacIntyre, drummer Aaron Steele (Portugal. The Man), bassists Reuben Cainer (Animus Rexx) and Jordan Brooks (Albert Hammond Jr), violinist Jennifer Choi (John Zorn), keyboardist Nick Semrad and guitarist Adam Agati (both of Cory Henry & The Funk Apostles), among others. The music video for ‘The Philosopher’ can be viewed HERE, and previously released tracks from ‘Overloaded’ include ‘Time Slips Away’ (HERE) and ‘Turning On the TV,’ (HERE).

21 Savage (featuring Summer Walker) –‘Secret’: A track featuring 21 Savage’s rap flow over an atmospheric and jazzy track with the vocals of superstar R&B songstress Summer Walker. The song, heavily dominated by Walker’s vocals and produced by Kid Hazel (‘Since When,’ ‘Out For the Night’), is said to align seamlessly with the rapper’s very public affinity for traditional R&B. it is his first single since the Halloween-inspired ‘Immortal,’ and if you are a fan, be aware that 21 Savage has big plans for 2020 and beyond.

Note Marcato – ‘Blackheart 39’: A dark and strange hip hop track with bouncy verses, intriguing noises, and beats. The video coming with the song has some strange horror movie vibes with Note Marcato wearing a mask and people with bags on their heads. The 19-year-old producer and songwriter told The FADER, ‘this video demands listeners to lift the mask covering societal insecurities and use those insecurities to evolve into a more authentic version of themselves. The symbolic meaning behind the Blackheart represents not losing yourself, amongst the masks. Reminding people that they are not heartless.’ His forthcoming first project ‘BeachBum Limbo’ features production by G Koop (Rihanna, Migos) and Soundz (Justin Bieber, Chris Brown), with guest vocals from Anatti, Nelson Mandela’s grandson.

NEW LANGUAGE – ‘No Time’:  A dark hard-rock song, which is currently played on KROQ, by a band which was last seen performing at Aftershock Festival. The song comes from their new ’The Complete Collection’ and is described by the band as ‘the universal anthem that digs deep into the modern everyday stresses of our society that keeps us all constantly running out of time to take the time to focus on ourselves. Swaying, moving, headbanging and singing along: Losing my head, losing my mind. No Time! No Time!’ It’s a sound both sinister and powerful with a touch of industrial new wave, plenty of hard-hitting beats and ferocious vocals.

Answering Machine – ‘Cherry Coke’: This is a poppy sweet earworm with bright chorus and explosive energy by a Brooklyn band which cites The Replacements, The Ramones, Blondie, The Ronettes, Tom Petty, Stevie Nicks, and Bruce Springsteen to Jenny Lewis, Against Me, as their main influences. The quintet recorded the video for the song while practicing social distancing as if there were 5 adolescents stuck in their respective bedrooms. The song is taken from their LP ‘Bad Luck” released April 17th, 2020, on Wiretap Records.

Trupa Trupa – ‘Fitzcarraldo’: The Werner Herzog-inspired track is quite a dream-like trip, it is a tribute to the German film director’s epic masterwork, but also a thick Krautrock-esque scene with dense instrumentation and the voice of Grzegorz Kwiatkowski soaring over sonic loops and pulsing beats. The result is hypnotic and cinematic (of course) with languid and melancholic energy, and the track comes from the band’s new EP ‘I’ll Find’ released last March. It is not very often you get the chance to listen to a Polish band.

Miles Morrison – ‘Off White’: Michigan-born and Los Angeles-based Miles Morrison raps over this new track coming from his debut ‘Hollywoodland’ EP, a collection of raw rap, alternative experimentation, confessional lyrics, subversive pop, with a cinematic vision. Even though the song has a mellow flow, the video, which comes with it, is a domestic murder mini-movie inspired by the Morrison’s favorite filmmakers: ‘I’ve always had a passion for film, I’ve always had a passion for directors like Stanley Kubrick and Quentin Tarantino, among others…Hollywood was my thing, even before music. So, I knew once I had an opportunity to get into music videos, I really wanted to implement all of that.’ Miles Morrison, who has pursued music and film before catching the attention of EP Entertainment, said he has found inspiration in everyone from Eminem to Eddie Vedder. He has signed to a joint venture between EP Entertainment and Epic Records for his first EP.

Dengue Fever – ‘Uku’: Recorded during the New York production of Cambodian Rock Band at Signature Theatre, it is a track from the award-winning play featuring songs by Dengue Fever and classic Cambodian rock favorites. The large ensemble has an electric take on Cambodian music while the play tells the story of a Khmer Rouge survivor returning to Cambodia for the first time in thirty years, as his daughter prepares to prosecute one of Cambodia’s most infamous war criminals. The haunting and soulful bird-like voice of Chhom Nimo soars over hybrid and exotic soundscapes, a layered signature sound effortlessly mixing surf-rock guitars, rich percussion, flutes, and a languid krautrock-esque dance hall.

Amy Rage – ‘Doin’ It Right’:  An impactful pop-rock synth-tune animated by tonic beats and a Robyn-inspiration. ‘Doin’ It Right’ is the lead single off the debut EP of this NYC-based, indie-pop artist. There’s a hammered 80s dancefloor in this indie-pop track while Amy Rage’s vocals have ’80s icons such as Madonna in mind. Amy sings about how having the right person by your side can lessen the world’s constant insanity and chaos, and the entire EP is a nod to beloved mainstream pop legends but is rooted in Rage’s DIY ethos and creative process. Amy Rage’s debut EP, ‘Solitude,’ is out June 26th.