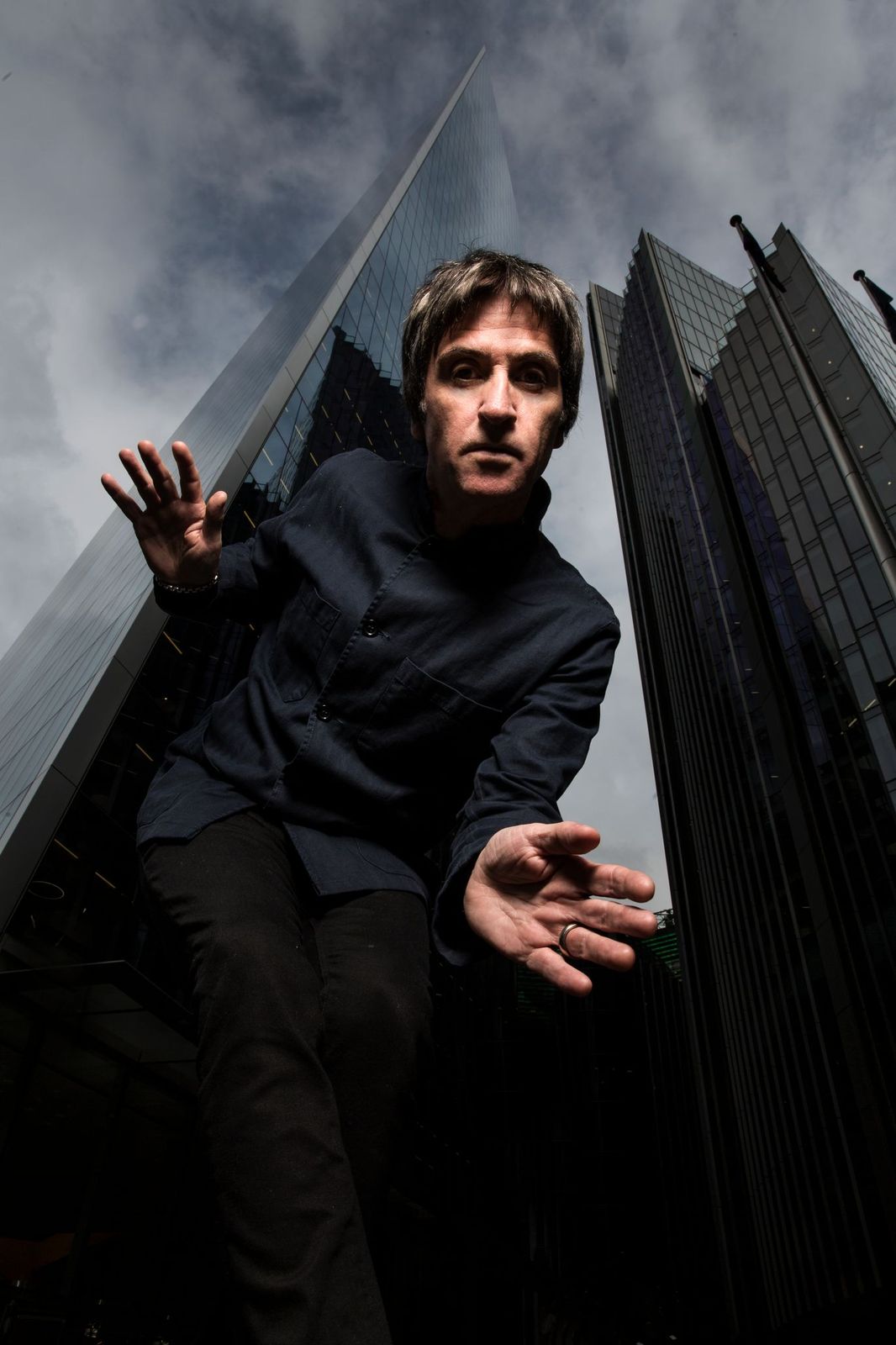 Newton Faulkner – “Leave Me Lonely”: A luminous fully-orchestrated pop ballad with a strong hook and Newton Faulkner’s smoky vocals that evoke the crooners of the past. The song comes from his new album “Interference (Of Light)” available through BFD/The Orchard in North America + South America and Battenberg Records. The British singer-songwriter has been working throughout lockdown from his recording studio in East London, exploring a number of new and unexplored styles and musical ideas, using them as the building blocks for this album. “I’m not very precious anymore,” he remarks. “The music is a bit chunkier, it’s definitely way heavier and much less acoustic than previously. I feel like the stuff I’ve written recently is simpler, but it’s tasteful… it works as songs. I can feel it.” “Interference (Of Light)” is an album that has seen Newton push himself musically and vocally: “I want to boil things down to their strongest form,” Newton says. “It’s about the songs. However good you are at playing, if the voice isn’t up to scratch and the songs aren’t good enough, no one is going to listen to them. It’s grizzly, soulful, and a step further,” he says of his new material. “Vocally, I’ve learned a huge amount over the years. I was a guitarist and a writer who sang. That’s kind of where I came from. And now I feel like my voice has caught up with the stuff I was doing on guitar.”

AM Higgins -“Anchors”: Emotive and fragile vocals, lush slow swirls, followed by drums and intriguing electronics which build an almost mystical and ethereal atmosphere. AM Higgins, the solo project of musician Annie Toth, has announced her first album, “Hymning,” due November 5, 2021, via Victorialand Records — the record was mixed by Casey Foubert, Sufjan Stevens’ long-term collaborator. “‘Come along, and be my anchor’ / this melody came to me and I sang it for months as a meditation to help soothe my mind while the world was coming undone,” said Annie. “The song that eventually unfolded is about providence; divine care for nature and the creatures of the earth. As the pandemic forced people to stay inside, nature flourished and on my hikes in the hills around my home, the ecosystems around me essentially sang these words,” Annie continued, “For this record, I asked Joshua [Dumas] to reach for an entirely new palette of sounds. ‘Anchors’ was the first one he sent back. The bells, the high strings – I love it all. He played the mandolin live and put it through a pixel grinder. And Jason has a skittery way of running around the organ chords on the drums with this one. It’s something we are continuing to explore.” Alongside the announcement, AM Higgins also shares the video entitled “Anchors.”

Bexley – “Sick”: An abrasive high-energy and good old-fashioned hard rock song, headbanging till the end. Frontwoman Amanda Hardy’s croon has been compared to Robert Plant’s and the ripping guitars to Soundgarden’s Superunknown. Los Angeles-based rock outfit Bexley has rocked the BMI Stage at this year’s Austin City Limits Music Festival, and they have just unleashed an eponymous debut LP. Fronted by Seattle-born shredder Amanda Hardy, who found her considerable voice and songwriting skills in the works of Alice in Chains and Chris Cornell, and joined by Canadian Steve Costello, an accomplished blues/rock guitarist inspired by the likes of Led Zeppelin and Queens of the Stone Age, Bexley has forged their own brand of melodic grunge. Mental health awareness is the thematic thread that weaves the songs on Bexley together; each track explores the process of dealing with emotions like anxiety, sadness, anger, and nostalgia. “It was very cathartic to write,” says Hardy. “We hope that it helps someone listening to it as much as it helped us to write it. When developing the production and instrumentation we tried to do exactly what we thought was right for the song and ignore what we thought people might want from us,” she adds. “The music is uniquely us and that’s why we love it so much.”

Chakourah – “West St”: A dreamy and lush soundscape haunted by Alecia Chakour’s warm and sultry vocals which gives a cinematic dimension to the expansive song. The bittersweet love song between a girl and a creature from another world is the EP’s first single off her forthcoming EP, “lotusland.” Running at 22 minutes, the EP is a lush, dreamy and playful exploration of grief, rebirth, and beginning again. Equal parts psychedelic folk and avant-soul, the EP honors, but never replicates, life-long influences as wide-ranging as Marc Bolan, Junie Morrison, Fairuz, and the Muppets. Best known for her collaborations, Chakourah is a celebrated vocalist, percussionist, and arranger who connects and uplifts artists across genres and generations. Co-produced alongside her brother, multi-instrumentalist Alex Chakour (Charles Bradley & His Extraordinaires, Brittany Howard), the Chakour siblings carve out their own unique fantasy world of “R&B-laced, cinematic Arab-Americana” on “lotusland.” As a member of the 12-piece rock & soul circus that is the Tedeschi Trucks Band, Chakour takes the lead as writer, producer, and frontwoman on “lotusland”—her first completed solo project in over a decade and the first in an emerging series of new work.

Johnny Marr – “Spirit Power and Soul”: A hard-hitting soulful electronica, with a strong hook and Marr’s distinct vocals over a nightclub dancefloor. This is a song of Johnny Marr’s “Fever Dreams Pts 1-4,” the first full album of all-new music since his 2018’s acclaimed “Call the Comet.” The 16-song album, out on February 25th via BMG, makes up a fantastically expansive work with a deliberate beginning and end. About the album, Johnny says, “There’s a set of influences and a very broad sound that I’ve been developing – really since getting out of The Smiths until now, and I hear it in this record. There are so many strands of music in it. We didn’t do that consciously, but I think I’ve got a vocabulary of sound. And I feel very satisfied that I’ve been able to harness it.” “Fever Dreams Pts. 1-4” explores a multitude of concepts and themes. Because the wider world effectively shut down during its creation, Marr’s focus was pushed into both his interior life, and evoking the emotional and psychological states of others. “It’s an inspired record, and I couldn’t wait to get in and record every day,” he says. “But I had to go inwards.” At the top of this, “Live at The Crazy Face Factory,” an intimate performance by Marr, will premiere globally on Wednesday, November 10th, and be available on-demand until Sunday, November 14th. Especially curated by Johnny, the special allows fans the chance to step inside his custom-built Crazy Face Factory studio where “Fever Dreams Pts 1-4” was created. Johnny will discuss his creative process and life in songwriting, alongside a set of full-band live performances from across his career.

Olive Vox – “Finger”: Raw and distorted guitars in full contrast with the dreamy vocals, soon exploding into dense and heavy psychedelia with fury. This is in fact a homage to Ty Segall by psychedelic, grunge rockers Olive Vox as the LA rocker has been one of their musical influences. The slow burner stays true to the original but Olive Vox also put their stamp on it with “a sound that loves to let the distortion pedals go wild and light the feedback ablaze… nailing the thickness and rawness of what makes psych, blues, and garage rock really sit well with young and older audiences alike.”   Originally from Orange County, CA, Parker James and his brother guitarist-songwriter Caden Shea moved to Texas as pre-adolescent kids searching to fit into a new landlocked environment. During the COVID-induced lockdown, Parker and Caden developed their sound influenced by psychedelic indie rock, garage rock, 90s grunge, and more. Their Gen Z perspective makes the music they play resonate to an audience searching for a new sound to embrace.

Nolan Potter – “Stubborn Bubble”: A charging psychedelic soundscape that evokes the creative madness of the Osees… This comes from Nolan Potter’s new LP “Music Is Dead,” and no wonder it was released via Castle Face Records. The 8-minute track is in fact a cocktail of genres turning into a floating experience before dropping back into its riff-rich groove. Nolan Potter has also shared a music video for the title track off the LP, described by director Taylor Browne: “Castleface Records presents Nolan Potter’s “Music Is Dead,” a moral tale of greed and the loss of innocence. This stop motion video was directed by an exceptionally sleep-deprived Taylor Browne in the vein of Terry Gilliam & Jan Svankmajer. The animation was created entirely by hand using illuminated manuscripts from the British Museum and vintage magazines found at Half Price Books. Additional Production & Camera Work was supplied by the illustrious Nick Tanner, Kasey Maloney, & Julie Wierd. Filmed entirely on location inside The Grimorium of The Eye. No members of Nolan Potter’s Nightmare Band were harmed in the making of this video.”