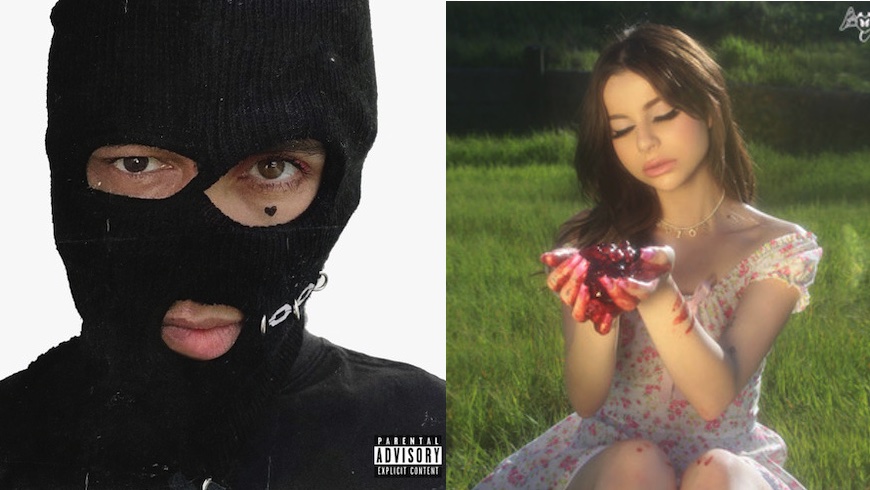 Dana and the Wolf, Nightjacket, Ellise, Coma Culture, So Zuppy, Paul Luc, a collaboration between Pussy Riot and Tom Morello are among the press releases for May.

Dana and the Wolf – ‘It’s Too Late’: A pop song with a big chorus, a certain anthemic quality, and some badass female vocals. The video confirms its cinematic vibe with bad-romance storytelling that lets you only imagine the series of arguments and loud fights. Chicago-born couple Dana Hobson and Daniel Wolf wrote and recorded their debut album, ‘LA FADE’ over a series of twelve turbulent months hunkered down in their 2-bedroom apartment in Burbank, CA. Dana had this to say about this first single: ‘’It’s Too Late’ is a great intro to the whole album because it was sort of the first failed experience we had seriously dating people outside of each other. Things jumped between amazing and horribly wrong and you get to witness it all! Come see the shit show that is Dana and the Wolf.’ ‘LA FADE,’ set to be released during fall 2021, tells tales of guilt, ghosting, and roller-coaster relationships – set to a backdrop of epic vocals, highly personal lyrics, and cinematic arrangements

Nightjacket – ‘Burn Through the Atmosphere’: A dreamy pop song with sweet vocals, a vaporous synth, and a tone oscillating between uplifting and nostalgic. This is a new track from Nightjacket’s upcoming EP ‘Following the Curves’ and it features new vocalist Andrea Wasse (Digital Daggers, DeadXLife) who brought comparisons to Mazzy Star, Beach House, and even more: ‘Recalling the haziness of Eighties and Nineties touchpoints such as The Cocteau Twins, Mazzy Star, and The Sundays, Following ‘The Curves’ is also a personal exercise in chemistry and musical partnership.’ The band is optimistic about its direction and continued strides towards connecting with fans on a number of levels. ‘I hope listeners to get lost in the music, in the best way.’ guitarist Jordan Wiggins said. ‘I love that transformative power of music, where it can take you to a different place or a different time, or just take you out of the moment that you’re in. I think that’s the case with a lot of the new music that we’re working on with Andrea – it has a sense of place and space, which I think listeners gravitate towards, even if it isn’t on a conscious level.’

Ellise – ‘Over Breakfast’: Rising pop star Ellise’s new single, which will be featured on her debut album ‘Chaotic’ out on May 14 via EMPIRE. Behind the sweetness and sincerity of the simple ballad, you can hear her sad sigh while the bucolic video has a bloody and creepy side: Bay Area-born Ellise is attracted to pop music’s ability to access the dark sides of the human experience. ‘I wrote this song while lying in my bed crying just after getting dumped,’ says Ellise. ‘I knew the breakup was coming a few days before it did and that’s what the song is about. I didn’t want it to happen but knew it was, and ‘Over Breakfast’ encapsulates exactly how I felt in the moments after the reality of it all hit.’

Coma Culture – ‘In Love’: An upbeat tempo runs through the song that blends euphoric vocals with vibrant synths. The result, a catchy and bouncy song with a seductive vibe, is a track from the album ‘Camouflage,’ by Coma Culture, a new indie rock band featuring Young the Giant’s Eric Cannata and Francois Comtois with producer/songwriter Jon O’Brien, set to be released on June 25 via Repost Network. ‘Camouflage’ combines vintage instruments, modern recording techniques, and classic songwriting for a sound that’s immediately distinct yet warmly familiar. Each song was crafted together, combining personal lyrics and layered production to communicate what it’s like to be alive today. The result is a sound that is sometimes unstable and warbly as if overwhelmed and interrupted by new technology, sometimes quiet and unsure about what comes next, and sometimes clear and confident.

So Zuppy – ‘Eachother’: A bedroom production with a fresh approach and plenty of playful ideas, exulting the simple feeling of being in love. This is the lead single off So Zuppy’s upcoming EP, ‘Blindly, Pt. 2,’ out June 3 via Look At My Records. ‘The song carries the hallmarks of a lovesick ballad through its honeyed words and light-as-air melody, but it’s further enhanced and distinguished through its electronic flourishes,’ declared his record label. The song revolves around a synth sound that is made from a clip of a race car engine with a tasteful amount of delay. The lyrics touch on the feeling of the red thread of fate, which is the idea that all lovers are attached by a red string and will eventually cross paths. It’s his first time writing love songs, and that willingness to experiment, along with his locked-in production and distinctive songwriting takes the songs to new peaks reminiscent of Postal Service and Animal Collective’s lovechild.

Paul Luc – ‘Just Sing’: A heartfelt Americana song, that sounds familiar at the first listening, and accompanied by nostalgic visuals created by Shawn Marazine. The uplifting song came about with the impending closing of one of Luc’s favorite local venues in the midst of an extremely difficult year. Relying on independent venues himself, Luc reached out to The National Independent Venue Association (NIVA) to see if there was any way to raise money for the cause. ‘I started going to all-ages shows as a teenager and it always felt like magic or that the world let me in on a secret,’ Luc says. ‘And now, performing around the country, I feel it when walking in the footsteps of other musicians and when I see the history of a club in the scrawls on a greenroom wall. These are special places that create unexpected connections and real community. And of course, I want to see our venues protected so others can be inspired and experience that magic too, whether from the crowd or on the stage.’ ‘Just Sing’ is being released as a 7’ bundle with a limited edition t-shirt via Bandcamp HERE and Luc’s merch store HERE. Proceeds will benefit NIVA.

Pussy Riot and Tom Morello – ‘Weather Strike’: This collaboration was something to expect because of the artists’ similar rebellion, rage, and visceral energy whether they are raging against the US government or the Russian regime. The result is a big headbang with Morello’s legendary aggressive riffs that have defined RATM for several decades, contrasting with sweet female vocals turning into a scream… This also gives some serious Die Antwoord vibes. ‘’Pussy Riot is one of the most radical and important activist musical groups of all time’ Morello declared. ‘Their fearless blending of art and confrontation is a constant inspiration and it’s an honor to combine forces on this powerful, revolutionary track ‘Weather Strike.’ There’s also a video, but not much to see there.