Press Releases For May : Here Are The Artists 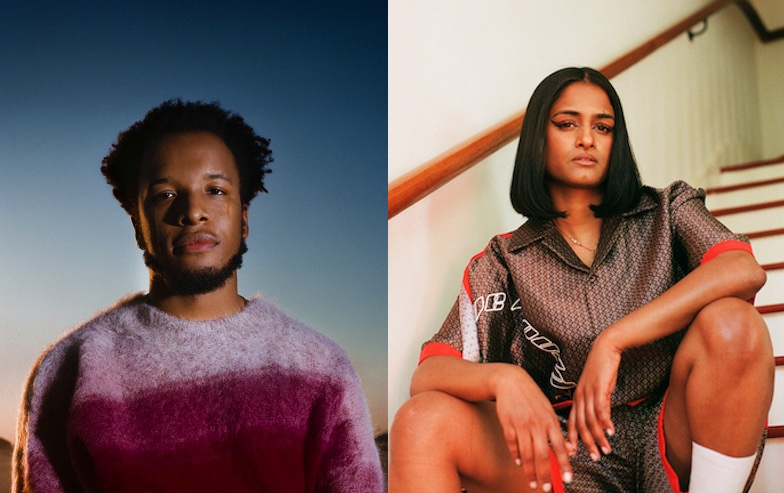 Trick Gum, Priya Ragu, Cautious Clay, BONZIE, Hot Knives, Swimm, and La Femme are among these press releases for May.

Trick Gum – ‘Hot Rifle’: A funny synth track that doesn’t take itself seriously with a playful guitar lick marching at the sound of exaggerated vocals. This is a song by Trick Gum, Justin Raisen’s new project, written and produced with his cousin Jordan Benik (LA Band Sweaters). Justin Raisen is obviously a legendary producer as he has worked with numerous hot artists such as Lizzo, Charli XCX, Angel Olsen, Yves Tumor, Kim Gordon. ‘’Hot Rifle’ is about being pushed to the edge and losing your faith in societal norms, the moment you give up on the rules and consider stealing a very large amount of money, and the peace that dwells within you at this moment, freed from the constraints of principle… in other words, a summer jam,’ Trick Gum explained of the track. It’s indeed a summer jam that came together in one afternoon at Justin’s studio. He started with a beat and Jordan fiddled around with synths until they had a groove. Then came Justin’s guitar with the warmth of a golden sun. ‘vocals took about an hour, the best songs always form easily,’ they declared.

Priya Ragu – ‘Forgot About’: A deeply emotional voice backed up by male and female harmonies for an old-school R&B tune with a golden vintage quality about an eternal feeling. ‘’Forgot About’ is about being in love with that ‘forever’ person, who has feelings for you, but it’s not quite love,’ says Priya. ‘It’s about being afraid of letting go, because you know that you’ll never meet someone like this again in your lifetime – so you decide to carry them always in your heart.’ This new single of Tamil-Swiss vocalist, songwriter, and producer Priya Ragu comes with a lyric video. Priya was born and raised in Switzerland after her parents escaped from the Sri Lankan civil war in the early ‘80s. She made her musical ambitions covert, sneaking out to jam sessions and open mic nights before decided to fully pursue them by moving to America with the help of her friend, the rapper Oddisee.

Cautious Clay – ‘Wildfire’: An R&B-tinged song with touches of Leon Bridges going into a more obvious dreamy indie-pop direction. The single, which comes with an acoustic performance here, announces Cautious Clay’s debut album ‘Deadpan Love,’ out June 2. ‘‘Wildfire’ explores the fact that people’s intentions sometimes get lost in translation,’ says Cautious. ‘Good intention is not always enough to prevent people’s emotions and insecurities from spiraling. Subtle signals or cues can unintentionally ignite emotions—like a brush fire.’ ‘Deadpan Love’ wraps influences from R&B, hip hop, and indie pop in Cautious’ trademark sophisticated songwriting and jazz and blues-inflected instrumentation. The album finds Cautious collaborating with a host of notable co-writers including Tobias Jesso Jr. (Adele, HAIM), Jim-E Stack (Caroline Polachek, Empress Of), Daniel Nigro (Olivia Rodrigo, FINNEAS), Jesse Shatkin (Sia, Kelly Clarkson), Ammar Malik (Maroon 5, Halsey) and Sir Nolan (Shawn Mendes, Selena Gomez), plus a collaboration with Chicago rapper Saba. ‘Deadpan Love explores the ways I cope with the worst of what humanity has to offer,’ says Cautious. ‘It’s about opposites—having an outer layer that’s tougher, this ‘deadpan’ state, and an inner layer of compassion, where you’re open to being there for the people you care about. It’s this warring compassion and cynicism that has empowered me to express myself through this medium.’

BONZIE – ‘Reincarnation’: A modern pop flair with confident but pretty vocals, exploring the current moment of our lockdown with an uplifting mood. Chicago-based artist Nina Ferraro, aka BONZIE, has released an animated video for this titled track of her album ‘Reincarnation.’ Her work for the album was self-described a period of self-reflection and ‘like the shedding of skin off a snake.’ The video is animated by Japanese artist Yosuke Tani and is an homage to BONZIE’s long-standing fascination with Japanese culture. After coming across Tani’s work through a Japanese television station, BONZIE contacted the artist to convey her vision of the song in Japanese, which she has recently become fluent in after redoubling her efforts during quarantine. Over the course of several months, they worked together to build the world of the ‘Reincarnation’ video, wherein different creatures coexist in a feudal society and induced reincarnation and calculated sacrifices are made to achieve peace.

Hot Knives – ‘Alhambra, Baby‘: A wild and noisy psychedelic rock track with a touch of experimentation and elements from funk and ‘70s jam rock delivered with punk fury. This is a track from Brooklyn psych trio Hot Knives’ debut LP ‘Making Love To Make Music To Make Love To,’ described as ‘a result of providence, and the end result of years of practice, planning, and meditation.’ They recognized being ‘tapped by the ghost of Jimi Hendrix to bear the torch of rock and roll,’ ‘following a mystical experience that opened a channel of communication with the rock gods themselves,’ As the concept gained momentum and Hot Knives developed the sound, the album transitioned from a home-recorded DIY project to a full studio experience that conveys the transcendence, intensity, and depth of a Hot Knives live set.

Swimm – ‘Spring Breaking Your Heart’: A surprisingly languid-dreamy song with pulsating beats, a sexy wandering melody, and vocals almost whispered on a pillow. LA-based psych-pop group SWIMM has shared the video for ‘Spring Breaking Your Heart,’ which follows two clowns through a journey of friendship and adventure amidst dystopian Los Angeles until finally, they arrive at the only thing that could save them from their creative coil… Spring Break. Telling the story of the track, SWIMM says: ‘I was trying tap into the excitement I felt being a student during Spring Break. As silly as Florida is, I love it, (speaking on beach life/frozen drinks and dancing to Shaggy/less of its sociocultural misgivings) and those weeks in March hold a sacred tacky space in my heart. There is magic in the ephemera of this season. Spring Break is this cocktail of tourists and locals, baking themselves in tanning oil and hedonistic intent, ready to embrace sand in their sheets and if stars align—some flash in the pan romance. And as quickly as it comes it is gone… giving way to the inescapable heat and humdrum malaise of the Space Coast summer. It was almost the 3rd month of quarantine and I was missing Florida more than ever. Growing up there I think my internal clock started fussing, knowing Spring Break had come and gone and there I was, isolated in our warehouse in the most industrial zone of downtown LA, going a little crazy with nary an end nor a base tan in sight. So I sought out the feelings I had been a teenager during Spring Break in Cocoa Beach and I don’t think I’ve ever had as much fun living in the world of a song. By the time I handed it off to the boys it wasn’t necessarily a song that would fit with SWIMM but Hany, our gifted keyboardist/bassist reimagined the song and infused it with his own brand of tropical sedation. ‘Spring Breaking Your Heart’ is now one of the more special songs for me as it represents the purest form of escapism; a nostalgia I am fine revisiting any chance I get. Fitting, I wrote the treatment for this video while still in Florida and approached Mitch DeQuilettes (director of our videos ‘Windows Up’) to take on the project with me. I was honored that he agreed to co-direct this with me and can’t express how much I learned from him in the process. The idea itself came from a picture I saw of the video’s lead, Lexi Noblitt, in which she had assumed this dramatic, almost morose clown character that still exuded sensuality. I could reach and say that perhaps she was the embodiment of Florida Spring Break—a little scary, a little fun, a little sexy, a little scary again—but all in all, the image just struck me immediately and eventually sparked the idea of exploring what artistic partnerships can do for and to people. We brought in our talented friend Alex Nelson to play her counterpart and the chemistry was palpable. By the end, there wasn’t a take that didn’t draw tears from the cast and crew.’

La Femme – ‘Foreigner’: A hilarious track about losing your lover, building into an intense crescendo with pulsating electro beats and an inimitable French accent as the song is sung in English by the French band. This is another song from La Femme’s critically acclaimed new album, the very eclectic ‘Paradigmes’, while the video for the song is especially noticeable as it features the guys wandering the streets of Paris disguised as a fake band, complete with karaoke-style lyrics, choreography, and hilarious costumes. The band has always felt a strong connection to travel, particularly in the US, and ‘Foreigner’ is the only song on their new LP sung entirely in English. ‘One day or another, we all end up feeling like a foreigner,’ says Sacha Got, ‘In this video, you will meet this fake band visiting Paris: on bateaux-mouches, in front of the Eiffel Tower…This is cheesy as can be because it feels good when it feels foolish!’