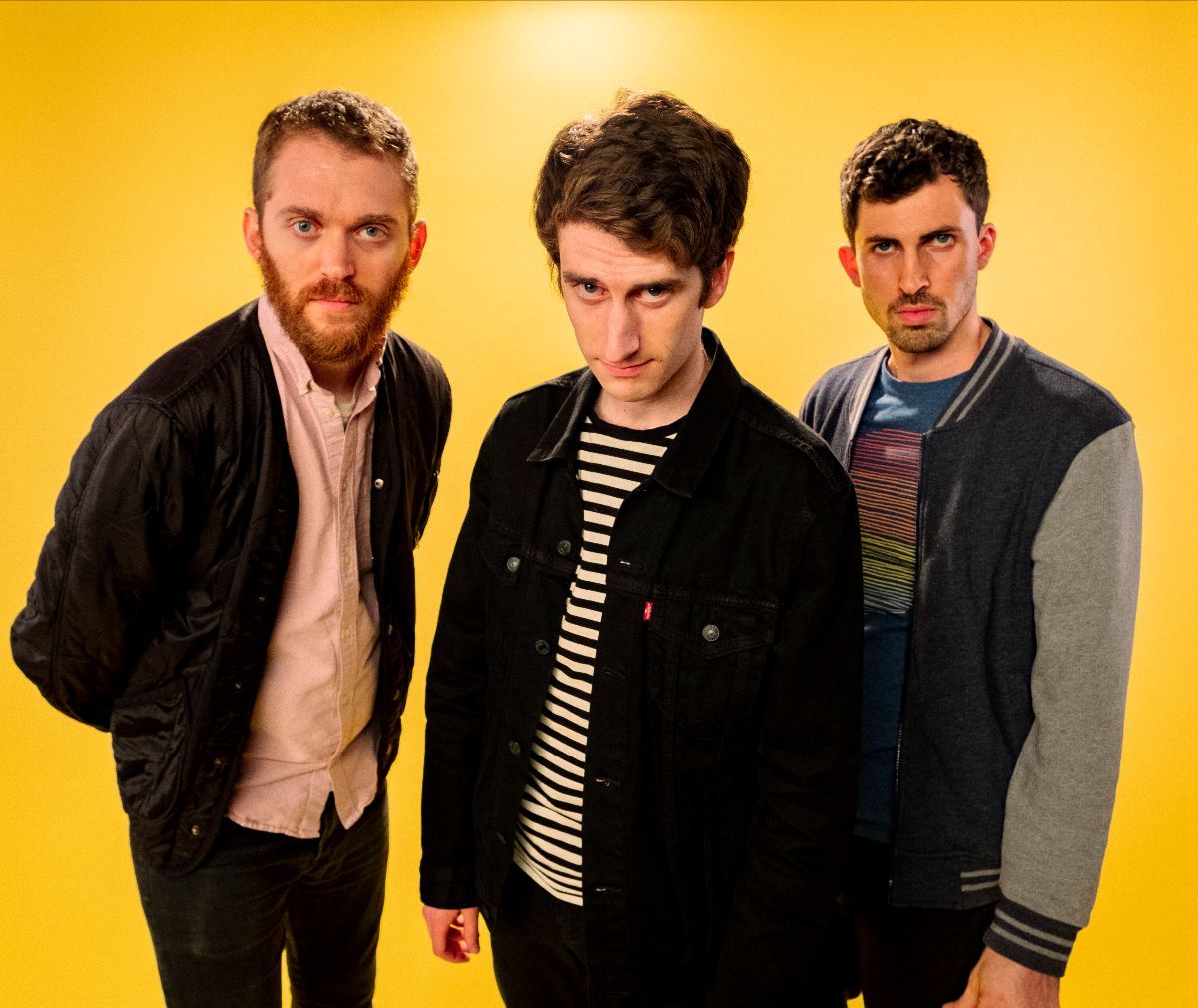 Karaboudjan, Lightning Bug, Laura Escudé, The Rare Occasions, Lionel Boy, Lydia Ainsworth, and Mazie are among the press releases for May.

Karaboudjan – ‘Let Go’: A buoyant and multi-layer track with fuzzy vocals lost in a haze of psychedelic pop that stays dynamic till the end, while a sweet hook emerges from the complexity of the electronic instrumentation. The track has been compared to Tame Impala, Grizzly Bear, or MGMT, and it’s easy to understand why: dark synth pads, lo-fi dance beats, and fuzzy techno soundbites. This is a new song from Southern California-based indie psych-rock artist Karaboudjan (Tycho) and the second single off his solo debut, ‘IMAGO,’ out in September. However, don’t be fooled by the beats, ‘Let Go’ explores grief in its many forms, and is a tender ode to his late father and an astute understanding of acceptance and loss. Kim explains: ’’Let Go’ is actually the oldest song of this release. I originally wrote the song instrumentally back in 2013. I knew I wanted the lyrics to contrast the light and laid-back dance vibe the music has. I also knew I wanted the song to be about losing my dad, and the vulnerability that it ensues. Lyrically, I finished the entire song in an instant, all but the chorus. And that is how that song stayed until I rehashed it for this EP.’

Lightning Bug – ‘September Song pt. II’: A melancholic and atmospheric guitar-driven ballad with an ethereal glow, just reinforced by the video and Audrey Kang’s hushed vocals swirling around the beautiful textures. Lightning Bug is the project of musicians and friends Audrey Kang, Kevin Copeland, Logan Miley, Dane Hagen and Vincent Puleo, and their upcoming album, ‘A Color of the Sky’ is out on June 25 on Fat Possum. This is the band’s first album with their new label home, the band’s first time recording together as a live band, and the first time Lightning Bug, initially a three-piece, is rounded out by Hagen and Puleo as full-time band members. Recorded in a rundown home-turned makeshift studio in the Catskills, ‘A Color of the Sky’ finds Lightning Bug sounding more organic, dynamic, and lush than ever, while also finding the band’s songwriter Audrey Kang sounding bolder than before. At the top of this, the band has announced tour dates supporting Bully on the west coast beginning on September 3rd in Spokane and ending on September 19 in Dallas.

Laura Escudé – ‘Embrace your Shadow’: The ethereal vocals, with an Enya vibe, combined with programmed electro beats and passionate swirls of strings give to the track a cinematic, immersing, and even adventurous dimension. This is the new single of Los Angeles-based artist, innovator, entrepreneur, and live show designer Laura Escudé and this is also her most personal work to date. ‘Embrace Your Shadow’ was co-written with Lila Rose and will feature on her new EP ‘Enoughness,’ out on May 11. Synthesizing her skills as a classically trained violinist and technical prowess, and avant-garde electronic producer, Escudé infuses neo-classical & sleek futuristic style with raw emotion elicited by her musical machines. In 2012, she founded Electronic Creatives, using her skills to hire and train programmers and playback engineers for artists including Logic, Ariana Grande, The Weeknd, Big Sean, Charli XCX, and the Yeah Yeah Yeahs. Escudé has also brought massive productions to life for the biggest and most influential artists in the world including Kanye West, Jay Z, Bon Iver, Missy Elliot, Herbie Hancock, and television megabrand American Idol. ‘For me, music is the most inclusive space. It gives me full permission to create, be and express myself,’ says Escudé. ‘I find when I am deep in musical reflection, I feel the freest and expansive. When I honor the sounds that naturally come through me, I am healed. It is my intention for this track, and the full EP, to be a journey and space to cultivate knowing, healing, and for transformation.’

The Rare Occasions – ‘Call Me When You Get There’: A sunny, multi-harmony-filled fun pop track with a big hook, reminiscent of some of the best moments of ‘90s power pop. The band has already received many praises for their killer orchestral arrangements while ‘Call Me When You Get There’ was featured on NPR’s All Songs Considered Blog. They will release their new album, ‘Big Whoop,’ on June 18. On the album, the band says, ’So much of this album was born out of struggle which forced us out of our comfort zones and to think beyond our own barriers. After the departure of our guitarist, Peter, we knew we had more to give to the world. This process pushed us to broaden our approach to songwriting, arranging, and production. We had released a couple of preliminary singles and then the pandemic hit which halted everything for months. This forced us to step back again, refine what we had created, and expand our new sound even further.’ Big Whoop was defined by the intensely DIY nature of the recording process. Almost every aspect of the production was done by the band. The recording sessions were all done in McLaughlin’s living room and spare bedroom, where he also mixed the songs. Luke Imbusch composed the orchestral arrangements, recruiting and then conducting a live string quartet for the recording. The band collectively shares production credits, with each member bringing their own unique contributions to the table.

Lionel Boy – ‘Mango Michelada’: An ultra-smooth track bathing within glowing synths and immersing vocals. This is the third single from Lionel Boy’s debut and self-titled album out on May 14 via Innovative Leisure. ‘Last February, I moved into a rehearsal space in San Pedro.’ Lionel Boy says of the track. ‘The space reeked of Fabreze and various chemicals they used to mask the smell of stale cigarettes. My drummer Jacqueline and I would mess around for hours in that space singing nonsense. At the time, we were in the habit of drinking Mango Micheladas at every session. On one of those days, we started out cracking jokes and ended up with a song we couldn’t stop working on. COVID-19 hit about a week later and I ended up having to move out of the studio, but we continued to work on this track throughout the pandemic.’ Despite being recorded during the pandemic, the album is described as an antidote for the anxiety, mixing spacey synthesizers, impromptu breakbeats, trap hi-hats, contemporary rap & bedroom pop into one cohesive statement.

Lydia Ainsworth –‘Cosmic Dust’: Ainsworth’s eerie vocals hover above an enchanting mix of clacking percussion, keys, and guitar licks so that the song seems to be all about sounding pretty, dreamy, and aerial. This is the single from singer, songwriter, and producer Lydia Ainsworth’s forthcoming album ‘Sparkles & Debris,’ released this past week. ‘We are simply dirt, water, and air animated by the sun for a particle moment; we will all soon be gone,’ says Ainsworth. ‘What is the legacy we leave behind if we keep hurting and devaluing other people’s existences? This song is about my hope for meaning beyond what feels like a nihilistic world order, one that turns a blind eye to injustice and abuse to each other and the planet.’ Written and produced by Ainsworth in Toronto, New York, and Los Angeles over many years, ‘Sparkles & Debris’ reflects her usual composer’s mindset and instinct for idiosyncratic melodies and structures. The album also marks a departure from the more solitary creative process that her previous releases were born from. Besides releasing several albums, Ainsworth’s original scores for film and commercials have screened at festivals such as Sundance, Cannes, and Hot Docs.

Mazie – ‘no friends’: A playful piece of vintage pop combining a depressive mood with humor. This is a single by 21-year old Baltimore native Mazie, who has also released ‘i think i wanna be alone‘ and ‘sippy cup.’ Cleverly mixing nostalgia with an impending sense of doom fueled by a world in an ever-deepening crisis, her singles have resonated deeply with her peers and have received 8.5 million streams to date. She hasn’t released a full EP yet but she is so popular that she has confirmed a slot at this year’s The Governors Ball in New York City, performing on September 26. She is also excited to announce her first national tour supporting COIN this fall, kicking off November 29 in Orlando, FL and concluding in her hometown of Baltimore on December 19.’The lyrics are the core piece to my songs,’ Mazie explains. ‘I feel like every song places a feeling of mine under a microscope and really allows me to dig into grander ideas and emotions I have towards those feelings.’