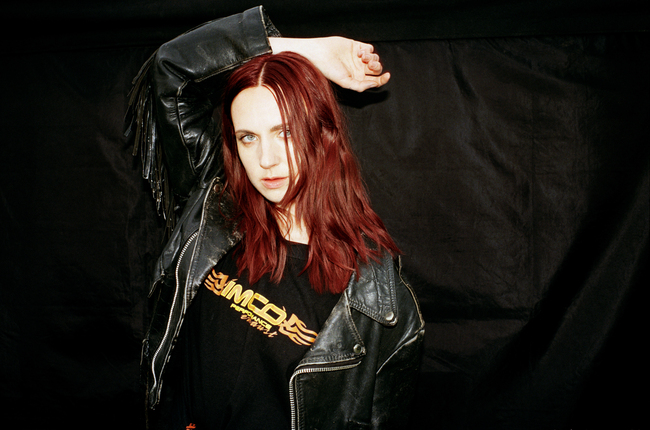 MØ is among the press releases for June (Photo credit: Ricardo Castano for ISSTUDIO)

Claud – ‘Soft Spot’: This song is already 6-month-old as it comes from Claud’s debut album ‘Super Monster, but since the band has announced an opening slot for Jack Antonoff’s Bleachers this fall, it’s in the news again. The US tour will kick off September 13th in Pittsburgh and winds its way around the country wrapping up in Harrisburg, PA on November 6th. Claud is also on the bill of Firefly Music Festival, Austin City Limits, and Outside Lands Festival. They’ve also announced their first headline show on September 25th at Elsewhere in Brooklyn, NY. ‘Soft Spot’ is a sweet pop song with an irresistible charm and a vertiginous but joyous coming-of-age reckoning with young love. With green and blue hair, the critically-acclaimed young songwriter writes sparkling tunes that capture the assorted stages of a relationship’s delight and dejection. The song is a bit nostalgic and dreamy, it deals with being young, figuring out your identity, and figuring out what you want out of relationships within the young LGBTQ+ community. Claud has signed to Phoebe Bridgers’ new label Saddest Factory Records. Here the video for the song.

Middle Child –‘Burn Out’: Emotional vocals over a minimalist and soothing piano ballad slowly waking up into a catchy chorus with an anthemic ambition. This is Middle Child’s debut single on Casual Jam Records, a fast-growing label owned by popular UK tastemaker MrRevillz. The duo features producer Jacob Lee and songwriter/vocalist Mikey Wax, whose solo career has already achieved over 1M online fans and music placements in advertisements for major brands including Nike Swim, Hollister Clothing, United Airlines, and the upcoming FIFA World Cup. ‘You keep me cool when I’m gonna burn out,’ sings Middle Child ‘and we dance away’ he continues in the refrain to bring it all full circle like the ups and downs of everyday life.

Royal Canoe – Scratching Static (feat. NNAMDÏ): A very original and creative kaleidoscope of genres, turning into a cool and hypnotic percussive chaos and delivered with a hip hop flair mixed with jazz notes. This is taken from Winnipeg’s award-winning indie-pop Royal Canoe’s upcoming new LP, ‘Sidelining,’ coming out on July 9, via Paper Bag Records / Birthday Cake Records. The video for the track is cleverly made of GIFs. ‘The initial idea for the song came from observing the relentless hustle of NYC jazz musicians – especially the drummers who find a way to condense their whole setup into a bag or dolly that they throw into a cab or drag onto the train, so they can hop from gig to gig to gig, night after night,’ says the band. ’There’s something compelling about this ability to adapt and stay hungry and keep your head above water within this hyper-competitive environment. We mentioned this concept to NNAMDÏ (Chicago vocalist, multi-instrumentalist, and all-around brilliant human), and in a couple of hours, at our practice space while he was waiting to go to a soundcheck, and with a mesmerizing display of lyrical ingenuity and vocalist swagger he was able to write/record these stacks of flamboyant stream of consciousness words that somehow managed to seamlessly weave between the lyrics we already had and also provide some connective tissue for the non-linear musical ideas of the song.’

MØ – ‘Live to Survive’: A epic-dramatic start combined with a fierce powerhouse for a song soon turning into a late-night club dancefloor. This is a new track from Danish superstar MØ, her first new music since 2018, accompanied by a Joanna-Nordahl-directed video. ‘Live To Survive’ was produced with rising Brit SG Lewis (Dua Lipa, Robyn, Victoria Monet) and co-written with Caroline Ailin (Dua Lipa, Katy Perry, Ellie Goulding). ‘‘Live To Survive’ is a song about pulling yourself back up after the crash of a toxic relationship to someone or something,’ says MØ. ‘It’s a reminder that life is a constant dance of ups and downs, and that the downs are OK. We’re here for it, ready to survive another heartache and rebuild ourselves again and again.’

Welcome Center – ‘Parasite City’: A wide-eyed production for a booming pop song with a bombast vibe, and an expressive-gory video. Welcome Center is Jesse Smith and Aaron Sternick, a band born on multiple road trips, with a moniker chosen to remind you that, at every state’s border, a welcome center lets you know you’ve arrived, no matter how lost you feel. The song ‘Parasite City’ challenges you to fight the urge to give in to all-consuming anxiety about the place you live. It comes from ‘Talk Talk Talk,’ a 3-song release out on July 16.

Boy – ‘Fit Back In’: Folksy vocals by Valeska Steiner for an uplifting bright-layered Americana tune with a twist, an arranged composition by Sonja Glass. This is a song from Swiss-German duo BOY, their first new music since 2015’s ‘We Were Here,’ and it comes from their, as yet unfinished, untitled third studio album which will be released on Groenland Records and SilverDoor Music. The song opens with the lines ’Feeling like a stranger in my city and my skin / Nothing around here reminds me of anything,’ although it was written before Covid-19 arrived. Instead, it was inspired by the death of Steiner’s father, with whom she was particularly close, and the lyrics were written over the course of more than a year. If, however, this sounds like the premise for a sad song, think again. It’s instead a masterclass in finding hope in despair. ‘I feel so grateful for this song,’ Steiner says, ‘because I really learned something for myself. I started writing it after my father passed, when I had this weird feeling that, in just one more week, a year would have gone by and somehow I’d have to be magically over it and not feel so sad or lost. It’s like there’s this official mourning period, and after that, you’re meant to be fine. So I wrote it while I was ‘allowed’ to have this feeling, then sent the lyrics to Sonja, who wrote the music. Later we decided the end wasn’t working, and another few months passed, and then the line ‘Time doesn’t heal / It just goes by’ came to me. It felt like such a relief! There are so many well-worn phrases we don’t really question, like ‘Time heals everything,’ but some things are just sad forever. I found comfort in acknowledging that, and at the same time I was able to see more and more clearly how, as time passes, it brings new life and new beauty and new things to look forward to.’

Dustin O’Halloran – ‘ ’Opus 28 – Silfur Version’: A classical piano-strings composition with a strong melancholic cinematic vibe. This is the new single of Oscar-nominated, Emmy-winning U.S. composer and pianist Dustin O’Halloran. The track is the third single from his forthcoming Deutsche Grammophon debut, ‘Silfur,’ which arrives on June 11. ‘’Silfur’ is an exploration of the music of my past and how it reflects back to me now in the present,’ says Dustin O’Halloran. ‘Evoking images of different moments, places, and periods of my life, and rediscovering the pieces that have stayed with me. Sometimes we can only understand ourselves by looking back, and hopefully, finding the thread of who we are and who we have always been.’ Conceived as a collection that both refines and expands upon the composer’s concepts of time, past, and present perceived through music, Silfur includes ten solo piano performances alongside collaborations with fellow American composer and multi-instrumentalist Bryan Senti, Icelandic cellist Gyða Valtýsdóttir, and the Siggi String Quartet. O’Halloran recorded the album with Berlin-based sound engineer Francesco Donadello and Icelandic musician Bergur Þórisson. O’Halloran worked on Silfur during the lockdown in Iceland, where he ordinarily spends part of the year. Unable to return to his other home in Los Angeles, he drew inspiration from isolation and Iceland’s unique atmosphere, revisiting works from four solo albums and refining them through the prism of his Icelandic experience.