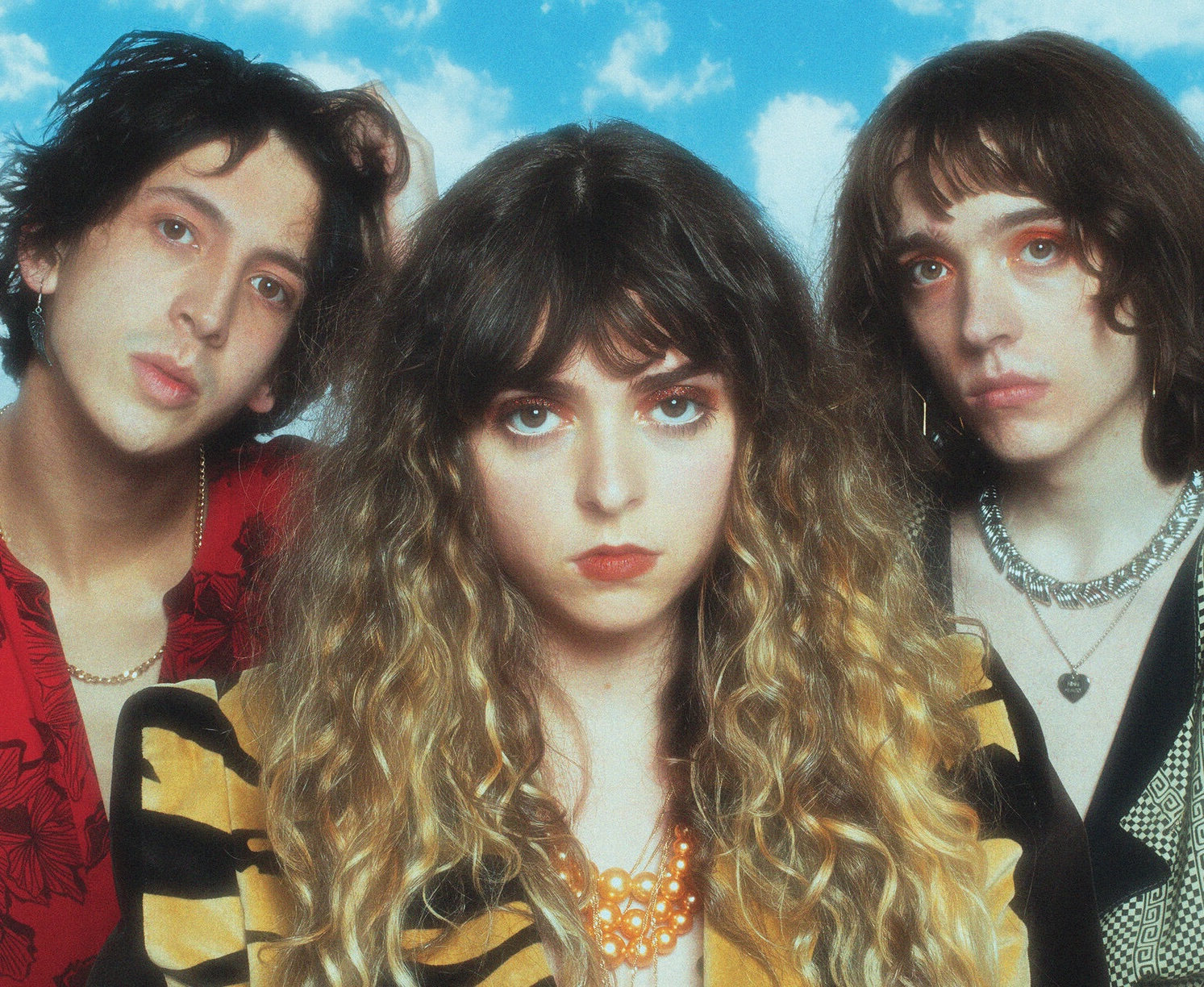 The Velveteers are among the press releases for July

The Velveteers, The Jungle Giants, Priya Ragu, ameliarose, JD Pinkus, GaTa, Kodo, and Rufus Wainwright are among the press releases for July.

The Velveteers – ‘Charmer and The Snake’: An infectious bass hooky riff with a sexy croon; the song sounds like an instant classic with attitude and shades of glam rock. The Velveteers are a primal rock trio from the mountains of Boulder, CO made up of singer/guitarist Demi Demitro, drummers Baby Pottersmith and Jonny Fig, and this is the titled track off their debut album ‘Nightmare Daydream,’ produced by Dan Auerbach, set for a release on October 8 via Easy Eye Sound. Growing up in Boulder, Demitro rebelled through her guitar, practicing up to nine hours a day and neglecting schoolwork to develop a playing style that is heavy but agile, theatrical but nuanced, grounded in rock history but wholly idiosyncratic. With Pottersmith and Fig playing on a conjoined set, the band developed a reputation for their rip-roaring performances. Clips of the band’s live shows and DIY videos made it back to Auerbach, who invited them to his studio in Nashville to produce ‘Nightmare Daydream.’ ‘I instantly dug them,’ says Auerbach. ‘They’re amazing live, and their videos are so creative. And they just sound so powerful. Any time you doubletrack drums on a record, it’s going to sound so heavy. Then you put that together with this baritone guitar player who is so unique, and it’s so bombastic. There’s nothing like them.’ Demitro recalls writing ‘Charmer and The Snake’ with Auerbach and recording it in the first few takes: ‘It was sort of a synergy moment where we all got in the room together and just started playing.’ Pottersmith adds: ‘It’s about certain types of older guys in music scenes who think they are charming and all that but are just lizards trying to take advantage of you. They think they can manipulate you to get what they want by saying a bunch of nonsense but all the while you are aware of their true intentions and just watch as they talk themselves deep into a ditch of delusions.’ Nightmare Daydream finds The Velveteers stripping down rock and roll to its most primal elements—the riff, the rhythm, the snarl—and rebuilding it in their own image. ‘We don’t want to sound like a band from a different time,’ says Demitro. ‘We want to sound like a band that’s right here right now—in this very moment.’

The Jungle Giants – ‘Love Signs’: A bouncy synth dancefloor with bright vocals going falsetto and an exhilarating chorus. This is the single off Australia-based The Jungle Giants’ highly anticipated forthcoming LP out July 23. ‘It’s the title track for the record because I found that it really set the tone for the album,’ frontman Sam Hales says, ‘I wrote it with my girlfriend late one night at home, and it’s been one of my favorite tracks ever since.’ Fronted by writer and producer Hales, the four-piece have released a handful of tracks from Love Signs, including ‘Treat You Right,’ ‘In Her Eyes’, ‘Heavy Hearted’ which is ARIA-certified Platinum, and ‘Sending Me Ur Loving,’ which was lauded by KCRW as having ‘exquisite hooks and pristine production,’ with Vogue naming the track one of the Best Songs of 2020. Three of the singles released thus far have placed in Triple J’s Hottest 100. The Jungle Giants’ 2020 world tour found the band in the United States, Mexico, Japan, UK, Netherlands, and France just before the COVID-19 pandemic hit in March. With further touring canceled and strict lockdown in Australia enforced, Hales focused his efforts on writing and recording the band’s forthcoming album. Hales found himself embarking on new, creative risks, inspired by the likes of Timbaland and Ashanti in his ‘90s production style and vocal falsettos. ‘It’s been a really good process, really self-affirming,’ Hales says of making Love Signs. ‘When you trust in your ability, and you trust in your heart, and just be really honest, that’s the best feeling in the world. The album is about all those little messages we send each other, the love signs.’ The group consists of Sam Hales, lead guitarist Cesira Aitken, bassist Andrew Dooris, and drummer Keelan Bijker. Together they have released three LPs, Learn to Exist (2013), Speakerzoid (2015), and Quiet Ferocity (2017). They have amassed over 350 million combined streams worldwide to date and counting.

Priya Ragu –‘Kamali’: A female Indian rapper with a hybrid sound mixing familiar R&B sensibilities with swirling electronic loops, Indian music, and South Asian drumming. The very danceable song is the work of Tamil-Swiss vocalist, songwriter, and producer Priya Ragu, who will share her debut mixtape ‘damnshestamil’ on September 3 via Warner Records. ‘This is the most pure and sacred work that I have ever put out into the world. I’ve carried it within me for a very long time until I found a way to translate it into these songs. I can’t wait for everyone to hear it,’ says Priya. ‘Kamali’ is inspired by a short film of the same name by director Sasha Rainbow, who also directed the colorful and exotic music video. It explores the story of Suganthi, a single mother living in a small village in India raising her daughter, Kamali. ‘In so many ways I could relate to this little girl,’ says Priya. ‘Growing up, we look at the world with curiosity and envision infinite possibilities without any limitation. For a lot of us, these possibilities and dreams get blurry by the way the roles of men and women are dealt out. It is culturally rooted in ancient traditions where we are only good enough to become wives and mothers. This still exists! I want to speak to all the Kamalis in the world to think bigger than that, to look further than that.’

ameliarose – ‘Goliath’: A truly original and playful piece of music stabbed by keys while her singing takes passionate, rebellious, and dramatic tones; there’s a little bit of jazz, hip-hop-lite rhythm, and Fiona Apple in these 3 minutes of alt-pop-rock. Through the evolution of the song, ameliarose describes herself as ‘rotten and sold to who bid the most,’ which is a parallel to how she feels her relationships have been on display, publicly, similar to an auction. It’s an anthem for overcoming toxic relationships; getting over that feeling of being helplessly stuck in your situation. The multi-octave vocal jumps in the chorus ‘spewed out of frustration, thinking about who I would’ve become if I hadn’t been surrounded by specific people,’ in the artist’s words. ‘GOLIATH’ is a powerful track with metaphors and deeper meanings littered throughout the single. ameliarose is a self-produced, singer-songwriter from New York, whose melancholic, piano-based atmospheric music is complemented with intricate drums, ethereal vocals, & slam poetry. During the pandemic, she has built an impressive, organic fanbase from consistent live streaming across Twitch, VOLUME, & Spoon. As an experienced entertainer, ameliarose has performed on American Idol & Sofar Sounds, and live at The Knitting Factory, The Bitter End, Ladybug Festival, Elm City Music Festival, & Aloft. ‘GOLIATH’is the first single from her debut EP (due summer/fall 2021) via Allegory/Deko/Gourmet Music.

JD Pinkus – ‘Gittin’ It’: A humorous, rural, hillbilly banjo-driven banger with JD Pinkus’s raucous vocals and powerful howl, accompanied by his chicken in the video. ‘Shows were few and far between this past year, so I explored new work avenues… I decided to become a Chicken Therapist to help make ends meet. Filmed in West Asheville at the end of Spring, Josh and Keturah Bishop helped me capture a day in the life of a Chicken Therapist. They weren’t aware that this was a thing…’ the Butthole Surfers’ bassist explains. This is the lead single off his second solo ‘space grass’ banjo album titled ‘Fungus Shui,’ a trippy banjo time warp that combines nostalgic Americana/bluegrass tropes with Pinkus’ punk-rock roots. A modern twist on an old-timey sound, ‘Fungus Shui’ is a musical journey filled with stomps, hollers, raucous banjo melodies, and gritty punk vocals. The album was written, recorded, and mixed by Pinkus himself at Plastic Cannon Studio in Asheville, North Carolina, and was mastered by Kramer. ‘Fungus Shui’ is due out on Shimmy-Disc/Joyful Noise Recordings on August 21.

GaTa – ‘Check Up’: A playful upbeat rap song from breakout actor, rapper, and mental health advocate GaTa. In the FXX comedy ‘Dave,’ GaTa is a talented rapper in his own right. While the show plays up GaTa using his connection with Dave to help himself breakthrough, Gata has been releasing a steady stream of his own music. Of the song, GaTa notes, ‘I wrote ‘Check Up’ about chasing that dream to have everything you want. Not just for me but for my people too.’ Written by GaTa and produced by Chizzy, the song premiered in the July 7 episode of the FX’s hit series where GaTa co-stars alongside showrunner Lil Dicky. The Los Angeles Times called him a ‘breakout sitcom star,’ as Davionte ‘GaTa’ Ganter is making a name for himself.

Kodo and Rufus Wainwright – ‘You Came To Me’: A very cinematic collaboration as the Japanese Drumming Collective brings exotic rhythms to Rufus Wainwright’s famous croon, while the track achieves some epic heights with layered textures and tempestuous developments. ‘I knew Kodo’s music and am a huge admirer of Brando Tamasaburo who used to work with Kodo for years,’ Rufus Wainwright says. ‘I had never dreamt of collaborating with them and when the opportunity appeared it came much more natural and easy than I would have thought. There is something very ecstatic and human in their drumming that I hoped to amplify with music and the choice of words based on some Sappho poems about coming together after fiery times. It was also a welcome opportunity to work with Marius de Vries again who produced three albums of mine and always surprises me. This time with his ability to translate from Ancient Greek into English.’ It indeed sounds effortless. The track comes from a new collaboration between Kodo and several artists including Elkka, Kevin Saunderson and Justin Cholewski, Andrea Belfi, Equiknoxx, and Skream. The traditional Japanese drumming collective Kodo’s vibrant living art-form explores limitless rhythmic possibilities. Their thunderous performances transcend both language and cultural boundaries, connecting people all over the globe with their heartbeat: the primal source of all rhythm. For the project, Kodo, which includes 34 performers, have channeled the uniting and multicultural spirit of the upcoming Olympic Games by joining forces with an array of influential international artists from Jamaica, Iceland, Italy, India, the U.S.A., South Africa, the U.K., and more, for a groundbreaking collaborative project, ‘Kodo Together’ which will be released on July 9th.