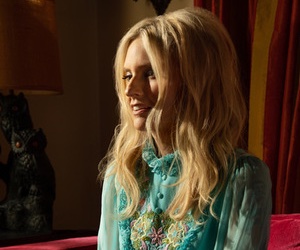 Liily – ‘Odds Are It’s Blue’: A noise-oriented track, some abrasive industrial anger performed with a cacophonic and intense furor at the image of their live shows. This is the new single from LA-based rock group Liily, and it ‘is about battling with the fear and indecision that comes with relinquishing all forms of control over one’s life and learning to be comfortable with letting things be and transpire the way they’re supposed to’, says Dylan Nash. ‘Odds Are It’s Blue’ continues the momentum and still contains the unbridled energy of early shows and singles but feels stripped of anything passive or unintentional. The single is now available via Southern California indie label Flush Records. Liily are four Los Angeles musicians – Dylan Nash, Sam De La Torre, Charlie Anastasis & Maxx Morando – who, up until now, were mostly known for their manic live shows. Those performances, alongside a couple of early singles packaged together into an EP entitled ‘I Can Fool Anybody In This Town,’ drove the band to some surprising early successes: performing at Lollapalooza and Bonnaroo, touring across Europe and the United States, then finding themselves on the cover of Spotify and Apple Music’s major rock playlists. Liily will be performing at the Mercury Lounge in NYC and Troubadour in West Hollywood this October.

Aimee Mann – ‘Suicide is Murder’: A classic piano-and-strings-driven Aimee Mann song with the songstress’s great abilities to tackle a very delicate subject: suicide. ‘I started to write this song because I’ve known people who committed suicide and friends who’ve had loved ones die from suicide,’ Mann notes. ‘I think the phrase ‘suicide is murder’ took on a meaning for me as it’s the worst thing to have to deal with in the aftermath. It’s just terrible. Because every person who knows the person who committed suicide will blame themselves in some way for not noticing or stepping in or doing something. They’ll till the end of their days, say, ‘Was there something I could have done?’’ Aimee will release a new album, ‘Queens of The Summer Hotel’ on November 5 via her own SuperEgo Records. Mann started developing the new music in 2018 when she agreed to write songs for a stage adaptation of Girl, Interrupted, Susannah Kaysen’s memoir about her psychiatric hospitalization in the late 1960s. It was material that Mann understood well, having had her own struggles with mental illness. The resulting music comes together in ‘Queens of The Summer Hotel.’ The album consists of a song cycle constructed from music that Mann wrote for the show, sung by Mann and orchestrated with her longtime collaborator Paul Bryan, using strings and woodwinds in a nod to the project’s theatrical origins. The accompanying music video stars James Urbaniak and is directed and produced by Puloma Basu and Rob Hatch-Miller.

Sufjan Stevens and Angelo De Augustine – ‘Back To Oz’: Hushed dreamy vocals and acoustic guitar wake up from melancholic to upbeat while the delicate intimacy of the sound is always present. The song, inspired by the 1985 film ‘Return To Oz’ arrives with a video directed by Alex Horan of Straight To Tell and animated by Clara Murray, and is taken from Sufjan and Angelo’s forthcoming collaborative full-length, ‘A Beginner’s Mind,’ out September 24 on Asthmatic Kitty Records. ‘This was a song that I had written mostly at home in California,’ says Angelo. ‘We finished its lyrics after watching Return to Oz. The words reference an erosion of a central character’s internal reality. A loss of innocence is the impetus for a journey to find inner truth. In the film, Dorothy returns to the world of Oz to find its landscape in ruins and its citizens frozen in stone. Only she can find the ruby slippers and return peace to Oz. Only we can save ourselves, but we first have to remember who we truly are.’ ‘Angelo is mostly known for his intimate home recordings; his music is quiet and confessional,’ adds Sufjan. ‘So for ‘Back To Oz’ we decided to go for something flashier. The song has a fun guitar groove, so we gave it some bass and drums, and Angelo even recorded his first electric guitar solo. It’s a sad song—being mostly about disillusionment—but it has a great party vibe too.’ A Beginner’s Mind’s 14 songs are inspired by films Sufjan and Angelo watched while writing together for a month at a friend’s cabin in upstate New York. Choosing a movie to unwind after each day’s work, they soon began finding inspiration in their nightly entertainment, using the Zen Buddhist concept of shoshin (literally ‘a beginner’s mind’), the I-Ching, and Brian Eno’s Oblique Strategies as guiding principles.

The Bots – ‘Scatter Brains’: Pounding drums, buzzing guitars and dreamy vocals become a denser and moody track with a piano interlude. This is the new single from the Bots and the latest track to be lifted from the September 8 full-length album release ‘2 Seater.’ Being scatter-brained and trying to work through one’s own thoughts, the new single is a fuzzed-out and frantic number about feeling lost, missing, indecisive and confused. Produced by GRAMMY® Award-winning producer Adrian Quesada of Black Pumas, ‘2 Seater’ is the brainchild of musician Mikaiah Lei and is a multi-style body of work that captures the struggles of his young adulthood. Each of the 10 tracks that make up ‘2 Seater’ was written between the ages of 19 and 22 when Lei was undergoing a rapid burst of self-growth. Now, as a 28-year-old, Lei has rewritten and recorded those songs to articulate themes he struggled to find words for back then: the ups and downs of young love, the need to nurture friendships, and the sentimental work of taking care of yourself each day. ‘The Bots was one of just a few projects I took on in the last year,’ Adrian Quesada says, ‘and it was truly one of the most rewarding and inspiring. Mikaiah and Alex are both rare talents and helping execute Mikaiah’s vision was a blast. He is one of the most brilliant, forward-thinking musical visionaries I’ve worked with. The album was lo-fi to hi-fi, found sound to carefully composed punk rock, and everything in between. One of the most unique albums I’ve ever worked on.’

Billy Idol – ‘Bitter Taste’: The new track lifted from Billy Idol’s upcoming EP, ‘The Roadside,’ his first new release in nearly seven years. With a hooky chorus, layered guitars, and a cinematic sense of adventure, the song is rather mellow with a touch of Billy’s wild nature towards the end. The track also features some of Idol’s most introspective and confessional lyrics ever, as he confronts death, rebirth, and his personal growth in the thirty-one years since his near-fatal 1990 motorcycle accident. ‘I think everyone has been feeling more reflective (during the pandemic). So, it seemed quite logical and natural to write something about my motorcycle accident,’ Idol explains. ‘Certainly, the motorcycle accident was the catharsis, the wake-up moment. A little bit of me got left on that roadside. But it wasn’t necessarily a bad thing in the end; it was a wake-up call. Maybe on that roadside, I left behind the irreverent youthful Billy and opened the door for a more attentive father and a more sensitive musician.’ Produced by Butch Walker (Green Day, Weezer) and featuring Idol’s longtime lead guitarist and co-writer Steve Stevens, ‘The Roadside’ was conceived, recorded, and mixed almost entirely under the shadow of the pandemic. It will be released on September 17 via Dark Horse Records. At the top of this, Idol is planning a run of 2021 tour dates. The shows include headline performances at New York’s Capitol Theatre and Las Vegas’ Cosmopolitan, as well as an appearance at the Sea.Hear.Now Festival in Asbury Park, NJ.

Stolen Nova – ‘Vortex’: A groovy song with simple guitar riffs, funky bass lines, synth swirls, and a dancefloor approach. Stolen Nova is the debut solo project from Josh Landau, frontman of the acclaimed L.A. rock band The Shrine, and if it is precisely very different from his usual fast hard rock outfit, the song was originally faster and ‘somewhere in my comfort zone,’ Landau says. However, he reworked it differently: ‘After it echoed around in my head and the melody drove me crazy for some time,’ Landau says, ‘I re-approached it inspired by Prince and Funkadelic, that sort of groove and style. It surprised me and that’s when I got excited, and it felt like a new universe for me. That universe is Stolen Nova.’ The track is accompanied by an animated video created with celebrated artist/director Nadia Lee Cohen (Kali Uchis, A$AP Rocky). ‘Nadia shot these photos of me for the cover and when we got the film back, she suggested I take a razor blade and cut my mouth out and make it move, ‘have the photo sing along to the song.’ She showed me this British prank phone call show ‘face jacker’ or ‘phone-jacker,’ something like that. It led me to watch Monty Python and old Dada films like An Andalusian Dog, and I leaned heavily into Jamie Reid’s art which I’ve always loved. I got obsessed and it spiraled into what you see here. Hours of cutting my head off and making it fly out of an egg and onto a woman’s body. When nothing is real, everything is possible.’

J.R.C.G. (mem. Dreamdecay) – ‘Holy Hope’: a drone-like, throbbing track with alarming lines piercing above confusing layers of synth and horns, building an intriguing and scary soundtrack for bizarre vocals and electronic noises. J.R.C.G. (Justin R. Cruz Gallego)’s previous work with Seattle’s excellent Dreamdecay may foreground the broad strokes here, but he’s pushed things way outward in terms of his sonic palette. Abutting field recordings captured from rodeos off Ajo Way, a stretch of highway that leads you westward out of Tucson Arizona directly into the sun, both acoustic instruments and gleaming walls of synthetic noise are framed in dour and dissonant chord shapes, crackling with overdriven drum mics and seasick waves of distortion.  It’s an homage that plays out like a collage, a dream switching from station to station, a series of dedications broadcast on late-night radio. All pin-hole size images from scenes never seen whole, strung together in but one version of complete. It all makes for a dazzling listen and the new LP will be out via Castle Face on November 19.