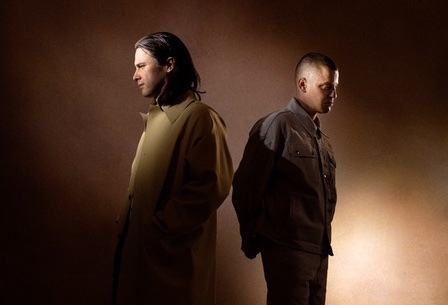 Jungle are among these press releases for August:

Fair Visions – ‘Modern Kids’: Stomping synth hooks, syncopated guitar lines, electronic percussion, and throaty vocals give the track a retro flair with an ‘80s dancefloor envy. This is the titled track off ‘Modern Kids,’ Brooklyn-based post-punk outfit Fair Visions’ sophomore EP, which should be out September 1. The six varied tracks of ‘Modern Kids’ find the band recalling new wave synth textures from the likes of New Order or Depeche Mode, married with pulsating interior rhythms drawn from dance-punk touchstones like LCD Soundsystem. Evoking artists like David Bowie and New Order in its oscillating moods and lush instrumentation, ‘Modern Kids’ embraces the darkness with a Pandora-like curiosity, introducing a wide chromatic rainbow of hooks and textures, from piano and stompbox fuzz to spectral background vocals and acid house breakdowns. At once tight and sprawling, Fair Visions have never sounded more complex in their channeling of the heady dance lineage of New York New Wave. ‘Modern Kids’ deepens the band’s chronicle of New York’s interior worlds against a tense backdrop of the city’s eternal four-on-the-floor rhythms.

Karaboudjan – ‘Falling Forwards’: A propulsive psychedelic pop song with an atmosphere filled by stratospheric guitars and ethereal vocals. This is the new single by Southern California-based indie psych-rock artist Karaboudjan (Billy Kim). ‘Falling Forward’ is the fourth single off his solo debut, ‘IMAGO,’ due out September this year. Kim shares that this song is actually about writing the music itself and finding his sound. Kim notes: ‘’Falling Forwards’ is about the frustrations of the creation of this project. I’ve played in countless bands, but have never released my own music. It’s about being better late than never, and even then you’re not truly certain if that’s the right decision. Originally, I was searching for a vocalist that would fit this project, starting back in 2017, but nothing came to fruition. So it forced me to write my own vocals, which really helped to find the sound for Karaboudjan.’ And the sound of Karaboudjan is very special indeed. Drawing on an eclectic variety of inspirations (from Tame Impala to The Adventures of Tintin), the multiple lush layers of ‘Falling Forward’ give the song its richness and depth. A hazy wash of vocals, the distant beat of electronic drums, and the smorgasbord of electronic textures create a soundscape that is entirely his own – airy, dreamy, psychedelic, and danceable. ‘Falling Forward’ may be about the frustrations of the creative process, but it feels like a ready-made summer festival anthem.

Sean McVerry – ‘Right Here’: A laid-back straightforward synth-driven pop song, bifurcating toward the end. It was composed by emerging songwriter and producer Sean McVerry who debuted the song on Brooklyn-based record label Better Company.  ‘I wrote ‘Right Here’ as a part of a series/writing exercise I did on TikTok – where I would basically try to write and produce something based on a suggestion from a fan,’ notes McVerry. ‘Someone had requested something ‘Like Adult Swim’ and I settled into this sort of wavy, tapey laid-back kind of groove. The video kind of took off and hit about three hundred thousand views over the course of a couple of days and I felt like I should finish it up and put it into the world.’ McVerry’s work is described as a careful combination of wandering melodies, with dollar-store theatrics. At his core, McVerry’s crooning sensibilities lay on top a bed of warbling synthesizers, florid keyboard arrangements, and a relentless groove. The Brooklyn-based artist has lent his musical vocabulary in various corners of the industry from Hip Hop production for artists such as J.I.D. and Princess Nokia, to playing with Danger Mouse, Karen O, and AURORA.

Mini Trees – ‘Carrying On’: A driving, pulsating, and upbeat song with a dreamy-sunny side that comes with a video. ‘I wrote ‘Carrying On’ in the middle of 2020 when I was out in the desert escaping the city and reflecting on the unsettling new way of life we all had to adopt during the pandemic,’ muses Los Angeles-based songwriter Lexi Vega, who is behind the solo musical project Mini Trees. ‘Despite how in some ways life had begun to feel mundane again, there was a constant underlying fear that everything could unravel at any moment. In a sarcastic tone, the song questions my ability to hold it all together. We tried to capture this sentiment with the music video, displaying a character who is being led through the motions of day-to-day life, but beginning to recognize that something isn’t quite right.’ Her debut album, ‘Always In Motion,’ ‘a collection of relatable indie-pop songs that acknowledge our collective anxiety about life’s improbability,’ will be released on September 17, via her new label home, Run For Cover Records.

Dave Hause – ‘Sandy Sheets’: An Americana pop song that blooms with a sort of Springsteen keyboard vibe. It’s also a nostalgic love letter to past summers, written by singer-songwriter Dave Hause. ‘The New Jersey shore is about ninety minutes from Philadelphia, and it was as much traveling as I had done till I was about 18,’ Hause recalls. ‘I can remember being a teenager there like it was yesterday, falling in and out of love each summer and listening to The Cure. ‘Let me remember you when it was easy’ felt like a good wish to have. Relationships, friendships, hometowns often end up messy and complicated over time, but there’s something magical about the start. As I get older, I just want to remember the feeling at the beginning, not the end.’ The acclaimed Philadelphia-bred singer-songwriter Dave Hause has announced ‘Blood Harmony,’ his fifth and by far his most ambitious solo album to date, set to be released on October 22. Produced by celebrated Americana singer-songwriter Will Hoge, ‘Blood Harmony’ features a first-class assemblage of musicians consisting of members of The E Street Band, The Highwomen, Brandi Carlile, Sheryl Crow, Carrie Underwood, Vince Gill, Sturgill Simpson, Jason Isbell, Chris Stapleton, Eric Church and many more. Beneath the surface of ‘Blood Harmony’ are multiple layers of meaning related to Hause’s role as a musician, a brother, a husband, a son, and—having become a father to twins a few months before the release of 2019’s Kick—a dad. Created with his younger brother and longstanding writing partner, Tim Hause, and being released on their very own label, ‘Blood Harmony’ also presents itself as a meaningful reassertion of what family means to them all.

Kalie Shorr – ‘Love Child’: A throwback alt-rock song with a country flair and an ambitious sound reminiscent of the ‘90s, while Kalie Shorr’s powerful vocals soar over the guitars. The single comes from her anticipated new EP, ‘I Got Here By Accident,’ which will be released August 13 via TMWRK Records. Produced by Butch Walker (Pink, Taylor Swift, Green Day), ‘I Got Here By Accident’ ushers in a new era for Shorr, who continues to write with her signature vulnerability, but with an elevated pop-rock edge. With these new songs, Shorr shares the reality of being a woman in her 20s – the self-exploration, the relationships—both good and bad—and the personal growth she’s experienced these past few years. Recorded at Walker’s studio outside of Nashville, the EP features only Shorr and Walker, who performed and recorded all vocals and instrumentation themselves. Reflecting on the EP, Shorr shares, ‘I’ve been listening to Butch Walker for 15 years now, and getting to make this EP with him was a total bucket list moment for me. It was a very small team that was involved, Butch actually played every single instrument on the EP. I love all of the songs on here and they feel like a really great summary of my 25th year. I want every project I release to be exactly that—a time capsule of my emotions that I can go back to and revisit like a scrapbook. I called the EP ‘I Got Here By Accident’ because no matter how much intention I’ve set, most of my biggest life moments have been completely by chance. It’s about running into the right person who changes you forever, it’s about finding out an insane secret that hurts in a brand-new way, and it’s about taking every accident, both happy and unhappy, as an opportunity to grow.’

Jungle – ‘Truth’: A synth dancefloor with a driving cinematic vibe, an infectious groove, and falsetto harmonies. The euphoric track is the latest from British songwriting and production duo Jungle and will appear on their highly anticipated new album, ‘Loving In Stereo,’ which is set for release on August 13 via AWAL. Jungle’s co-founder Tom McFarland states: ‘‘Truth’ is another moment on the record which came very quickly and naturally. It was the most different sounding thing we had made at the time and for that reason couldn’t ignore it. For us, it’s about youth, love, and trust. The feeling of finding someone who means more than anything else in the world.’ Jungle directed the video for ‘Truth’ alongside longtime collaborator and creative partner Charlie Di Placido, the fourth entry in a larger project to create a visual identity for every track on the forthcoming album. In pursuit of this aim, Jungle filmed all the visuals in five days, shooting roughly three videos a day. ‘When we write music there’s hope,’ says the other half of Jungle Josh Lloyd-Watson. ‘Maybe today we’ll create something that influences people and changes the way they feel. If you can make something that lifts people, that’s an amazing feeling.’