Press Releases For April: Here Are the Artists 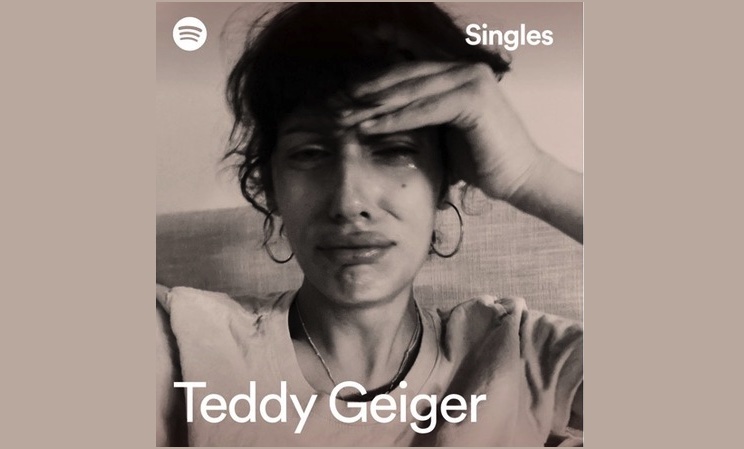 Teddy Geiger, among the press releases for April

Paupière – ‘Sade Sati’: A synth galore in march, building up a busy and anthemic soundscape behind lyrics in French – the band is from Montreal. This is the first single off the upcoming LP of the same name. ‘Sade Sati,’ out May 7. Led by Julia Daigle (visual artist) and Pierre-Luc Bégin (Polipe, We Are Wolves), Paupière is a glamorous and flamboyant Montreal duo with an underground sensuality that creates pop music that is both naïve and profound. In case you were wondering paupière means eyelid, but they prefer to be defined as ‘peau’ (skin) and ‘pierre’ (stone), opposing the organic and the mineral, sensitivity, and hardness. Mixing English synth-pop and French songs, Paupière is described as a ‘neo-romantic’ band, with echoes of Human League, Deux, or Depeche Mode, while their intertwined voices sing about the adolescent and hedonistic romanticism of the ’80s as much as contemporary disenchantment.

Waker – ‘Many Days Ahead’: A Nashville-based indie-rock sextet that uses an exuberant saxophone and a guitar solo for their uplifting pop song turned emotional with its soaring vocals. ‘Many Days Ahead’ is the single from their upcoming debut album, ‘Fresh Out’ (out May 7) and it comes with a live video. The album was produced by former lead guitarist of Cage the Elephant, Lincoln Parish, and it tells the story of an American road band in the year 2020 and the trials and tribulations they’ve had to endure along the way. ‘Many Days Ahead’ was written following the end of a long relationship when frontman Chase Bader was re-learning how to discover himself and what he thought was most important. ’Right now we are all in a valley, but the great thing about a valley is that there is always a peak that rises above,’ Bader explains. ’Above all, we have the hope that life does and will get better. You just have to lean into the emotion and the separation, learn from it, be kind to yourself, be kind to others and endure.’

Justin Nozuka – ‘No One But You’: A soft and soulful tune with the languid sweetness of a long morning in bed. The lush song is a romantic duo with vocal queen Mahalia, while the Toronto-based R&B sensation has announced his new EP, out April 9th via Black Box. Son of a Japanese father and American mother, Nozuka has drawn praise previously with a duo of JUNO nominations in Canada, as well as winning an NRJ Award in France. His other songs, ‘summer night o8’ and ‘After Tonight,’ have given a preview of this new style.

Jungle – ‘Keep Moving’: A nostalgic sweeping piece of orchestration with a cinematic dimension mixing a chorus of falsetto voices, vibrant strings, full-bloom disco grooves, and group dancing in the video. British songwriting and production duo Jungle will release ‘Loving In Stereo,’ their highly anticipated new album, on August 13 via AWAL. As co-founder Tom McFarland summarizes, ‘Whatever you go through, as long as you can stay strong and fight it, there’s always something on the other side.’ Jungle directed the video for ‘Keep Moving’ alongside longtime collaborator and creative partner Charlie Di Placido, the first look at a larger project to create a visual identity for every track on the album. In pursuit of this aim, Jungle filmed all the visuals in five days, shooting roughly three videos a day. ‘Our focus was to create a collection of visuals where we developed the narratives of the characters throughout the whole piece, giving the audience a chance to form more emotional connections to these inspiring people,’ explains McFarland. ‘We had always been inspired by West Side Story and the idea of two groups working together and in opposition at times,’ furthers the other half of Jungle, Josh Lloyd-Watson. ‘We worked closely with two of the best up and coming choreographers in London, Nathaniel Williams and Cece Nama, who both have their own distinct styles. The fusing of these two styles created a whole new approach for us where style and movement could be fluid.’

Powerlines – ‘Frames’: A song slowly building toward the light with its soaring and emotional vocals over a guitar loop. This is a single from New Brunswick-NJ-based expressive pop-rock band Powerlines who will release a new LP, ‘all of this is temporary,’ on April 9. The debut album is a collection of sonic vignettes about difficulty, pain, love, and the acceptance of ephemerality, all through an optimistic lens. Shot in the rosy hues of New York City at twilight, the music video for ‘Frames’ captures an intimate perspective of welding, using metal frames to symbolize the different ways in which we frame our lives. Cinematic and metaphorical, the video also captures the optimistic message of the album with an aesthetic tangibility. Guitarist Tyler Anderson notes: ’Frames’ is a song about being alone with your thoughts and the feeling of constantly losing time. It shows the feelings of a person who is looking at the past and regretting not appreciating what they had while it was happening. It was a time in my life where I felt trapped by loneliness and failure. I could not break free of the thoughts that were constantly circling in my head. This song is about someone who is fighting to become a person who lives in the ‘now’ but is losing that battle. The end of the song represents a moment where I decided that even though I know I will always be hurt by the past, the memories will fade and time will continue moving.’

Craig Wedren – ‘Going Sane’: A powerful and grave sound with strong lyrics. The acclaimed film & TV composer (Wet Hot American Summer, Shrill, GLOW, Zoey’s Extraordinary Playlist, more) and former Shudder to Think frontman continues to make music with a sound in continuation of the music he created with the acclaimed 90’s DC-area band. ‘Bearing in mind that the meaning of songs is a fluid and unfixed thing, ‘Going Sane’ seems to be about the promise of wellness and sanity that comes from outside of ourselves, versus the wellspring of good health and wisdom that is available within,’ Wedren notes of the track. ‘The former can be crazy-making; the latter is ever-present and waits patiently for our relaxed attention. Having had some shocking health issues in my life (cancer, heart attack) it has become increasingly important to me to discern between the two. That is not to say there isn’t good information and miraculous medicine out there, but that the frenzy with which we grab and grope at it -and the equally demented ways it’s often presented- can undermine itself and our wellbeing.’ He continues, ‘‘Going Sane’ is also one of a handful of very Shudder To Think-y songs that popped out while writing for this new collection, which was a very welcome surprise.’

Teddy Geiger – ‘Love Somebody’: A vaporous track with tropical beats and Teggy Geiger’s restrained vocals. The new video complements the new single that the Grammy-nominated singer, songwriter, and producer wrote with her hitmaking, Grammy Award-winning songwriter/producer colleagues Ricky Reed and Dan Wilson. This was also produced as part of a partnership with Spotify for their first-ever Spotify Singles x Noteable collaboration. ‘Love Somebody’ grew from a night Teddy spent with Reed and Wilson during the first few months of quarantine and was influenced by how much her two collaborators have taught her about ‘real love and family.’ ‘It felt like a fun challenge for me to bring these feelings out in a live setting and get comfortable allowing [them] to be a part of the things I create,’ she says. She cites both Reed and Wilson as central male role models in her life, helping her to gain a deeper understanding of herself and her relationships, including her relationship with her father. ‘I am so proud of what I see in both of them in their family lives and how that affects who they are as creators and what they hold to be valuable,’ she says. ‘[‘Love Somebody’] is a challenge to myself to keep growing and learning and being able to relate in new ways and really be with the people around me.’