Press Releases For April : Here Are The Artists 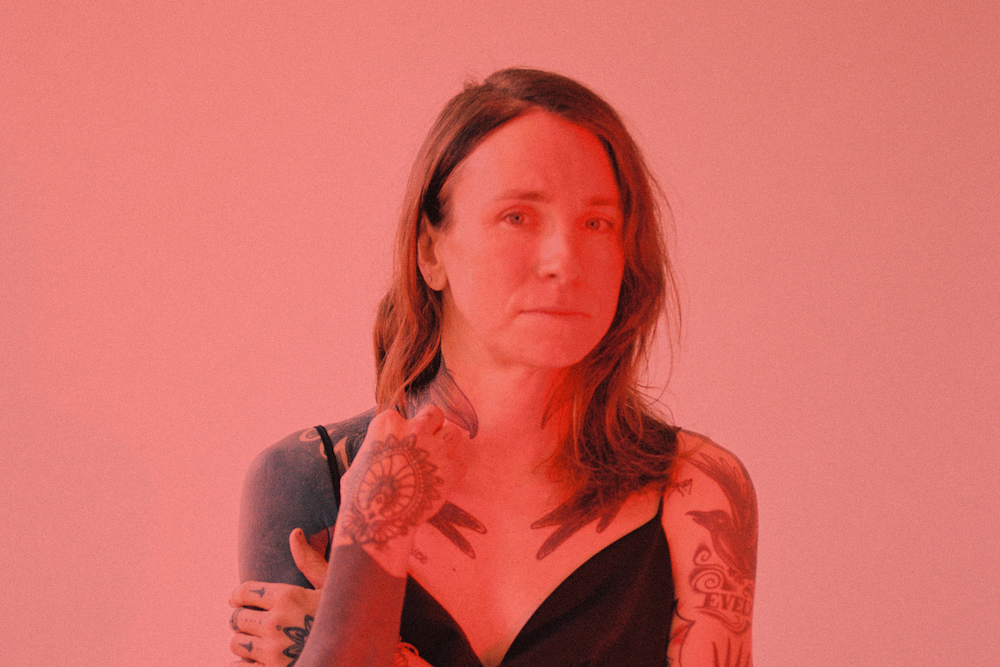 Laura Jane Grace: among the press releases for April

Alice Merton – ‘Vertigo’:  While dense drums and cathartic guitar riffs follow a nervous tempo, the song has a vibe of intense liberation thanks to Alice’s powerhouse. This stadium-ready anthem is Alice’s first single of 2021 and she describes it as a long road from uncertainty back to self-confidence. ‘It emphasizes the unrest that seizes her again and again, the thought: ‘Why can’t I just let it go?’ These contradicting thoughts and emotions that are so familiar to all of us sum up to an overwhelmingly positive effect – ‘Vertigo’ leaves you empowered rather than anxious: A powerful indie-pop arrangement with distorted guitars, plus Alice Merton’s crystal-clear voice. The result is reminiscent of the British Invasion, with no air of self-doubt. With its energetic live qualities, ‘Vertigo’ feeds an appetite for summer festivals and concerts that will definitely return at some point. Largely responsible for this is the Canadian producer Koz, a multiple Grammy nominee, who has worked with Dua Lipa (‘Physical’) among others. Here, too, he adds on to what has already made Alice Merton stand out from the crowd in the past – her classic pop appeal – with an uncompromising and indie attitude. This enables Alice to take another big step: She equally encourages a shaken generation and herself that there will be easy summers again. That you can dance again and lie in each other’s arms. That it is absolutely fine to have many facets, to not always be clear, and that strength and weakness are not mutually exclusive.’

Ashlynn Malia – ‘Open’: A very delicate finger-picking ballad with ethereal and emotive vocals growing into a more spacious arrangement of strings. The sweet and melancholic song has a real cinematic quality and is the lead single off Malia’s upcoming EP ‘rather be alone,’ due out this summer via Jullian Records/The Orchard. Discussing the background of ’Open,’ Ashlynn Malia says: ‘Funny enough, I wrote this song when one of my friends took too long to text me back. I always say that songwriting is my time to be a drama queen since I’m pretty chill and non-confrontational in real life. But I guess that night, that small thing just sent me spiraling, and every other insecurity I had about that relationship came to the surface and filled the temporary silence on the other line. ‘open’ is a song ultimately about fear. Fear of opening up and letting somebody else into your world, and then fear of the consequences that could rise after judgment, rejection, and abandonment. I’ve spent so long convincing myself that if I let someone get too close to me, the real me (not me I think they want me to be), then they will lose interest, and it will hurt a lot more to let my truest self-face that rejection instead of the metaphorical mask I wear. I wrote open using a chord progression that had been tossed to the side during a writing session I’d had earlier that day. My writing process usually starts with just me and one instrument, and then I take it to my producers and we build from there.’ The song comes with a charming video.

Hamish Anderson – ‘Morning Light’: An inviting track filled with optimism and playful arrangements and a ‘70s vibe, building from a driving guitar and drum beat to boldly distorted T. Rex meets George Harrison tones. It is his first new music since 2019s ‘Out of My Head,’ an album that won the  Independent Music Award for ‘Best Blues Album.’ Hamish wrote ‘Morning Light’ prior to 2020; but while the world was evolving, this song not only resonated with his audience but also became an acoustic mantra during all his live stream shows. He shared: ‘’Morning Light’ came to me when I was on my first European tour in 2018. I remember I was lying in the back of the van with the sun shining on me when the lyrics and melody just popped into my head. I had been thinking about all sorts of hard times that everyone has to endure — and how much of it actually turns out okay. I wanted to capture that feeling of hope that a new day can bring by reminding myself that things will get better – and that these everyday moments really do shine through if you pay attention.’ This marks the first collaboration with co-producer David Davis (Miguel, The War on Drugs, Lauren Ruth Ward). ‘Morning Light’ was remotely produced while Hamish was in lockdown in Melbourne, Australia, and the band – bassist Lauren Stockner; drummer Matt Musty (Grace Potter, Train); plus soulful backing vocals by Jessica Childress (Aloe Blacc, Allen Stone) – and producer David Davis were in Los Angeles, CA.

Marion Raw – ‘Run With The Sea’: A cracking track flickering like an old gramophone and some haunting vocals delivered with real pathos and drama, reinventing a unique dark folk. This is a song from Marion Raw’s debut solo album, ‘Deep Cuts;’ she explains the inspiration behind her garage-folk, and how her traveling lifestyle has influenced the songs on the record: ‘There is certain freedom growing up as a tourist and foreigner in so many different places, in that you can try different cultures and customs on for size, without ever really identifying with those masks. You learn to observe and listen to people’s stories as an outsider looking in.’ Spending much of her childhood in airports and hotels, all the accents and stories a young Raw overheard were embedded in her mind, ultimately shaping the moving pictures around each song on Deep Cuts: ’I was always fascinated by adults talking about their lives, and I feel that has strongly colored a lot of my writing,’ she shares. ‘The melodic accents I was exposed to frequently visit me when I write—from the southern Texan twang to London’s melodic swagger—it’s all very present within my histrionic Mexican roots.’ ‘Deep Cuts’ is comprised of home recordings and capsuled broadcasts. Each track is sewn together to create a ghostly snapshot of a long-lost cassette, unearthed far from home, broadcasting into an unknown, perhaps (not so) distant future. ’There was no planning, polishing, or budget for that matter,’ says Raw of the DIY production of Deep Cuts, ‘just some leftover blank tapes, an old four-track Tascam, and the imminent sense of doom that accompanied the first lockdown of 2020.’

Gavin Preller – ‘Wonder’: If the press release compares the song and Preller’s vocals to the likes of Sufjan Stevens, Will Oldham, Nick Drake, and Jeff Buckley, it’s difficult not to think about Elliott Smith. His hushed vocals and melancholia, but especially his guitar sound seem to be very much inspired by early Elliott and ‘90s Portland. The song comes from his debut LP, ‘There Is Wonder,’ out May 21st on Kramer’s Shimmy-Disc label and Joyful Noise Recordings. The album was written and recorded between October 2020 and February 2021 in Albany, NY. Preller wrote, arranged, and performed every song from a basic basement set up in his parent’s home – except for drums on two tracks, which were recorded by Leor Manelis. The first six songs on the record were conceived quickly – written, recorded, and mixed within one week. Upon sending those tracks to iconic producer Kramer for mastering, Preller was unexpectedly signed to the Shimmy-Disc label and encouraged to expand the six songs into a full record. Preller spent the following months completing the album while living at home and working part-time. Preller is already at work on the next project and will be moving to New Paltz, NY, in July 2021. ‘There Is Wonder ‘​ is a subtle, contemplative, and courageous debut and marks the beginning of Preller’s promising music career. Watch the video for the song ‘Wonder.’

Laura Jane Grace – ‘SuperNatural Possession’:  A full rocker delivered with forceful energy, a stomp, and an undeniable swagger. There is also a video for the track which is lifted from Grace’s critically acclaimed solo album, ‘Stay Alive.’ Across the 14-song album, Laura Jane Grace takes all her pent-up fears, anger, and anxiety and releases it, like an olive branch to the weary listeners who are feeling those exact same ways. The songs are documents of a time and a songwriter who experienced enough to find levity in the simple act of doing work. Recorded with nothing more than an acoustic guitar, and occasional drum machine, and her own powerful voice, Grace’s distinct songwriting signature is front and center. Grace wasn’t planning on making a solo record this year. In fact, she was planning on making a record with Against Me!, the band she’s fronted for the past 23 years. But clearly, nothing went according to plan this year. ’We came home from the Against Me! tour we were on in March, and right before we left, we had been in the studio working on songs, and I had been working on them for months prior,’ says Grace. As she sat at home, all of her tours canceled, and the members of Against Me!—as well as her other band Laura Jane Grace & The Devouring Mothers—spread across the country, she was left with a batch of songs and no band to record them with. ’I sat around for a month-and-a-half at a home just being shell-shocked being like, ‘What the fuck happened and what the fuck is happening with the world?’ As I started to get my bearings, I just came to the realization that waiting was going to kill the record and kill the songs. I spent two years working on all these songs, and the idea of throwing them away didn’t sit well with me,’ says Grace. ’But then I was like, ‘What am I waiting for?’ All I have to do is adjust my scope. I can sit here on my fucking ass and do nothing, or I can work.’ 2020 frustrations, roadblocks, and world events aside, at the end of it all, Grace made this album purely for herself. ’I just want to put this out because it makes me feel alive and it’s giving me something better than sitting here losing my mind while the world falls apart,’ she says. ’It doesn’t matter what anyone else thinks about what you do. Just stay alive.’

Mr. Jukes, Barney Artist – ‘Blowin Steam (Open Up Your Mind)’: A Jazz-infused rap and a collaboration between two masters of their craft, blending their styles to create something fresh and forward-thinking. Bonded by the back catalog of A Tribe Called Quest and a mutual love of the ever-changing landscape of modern hip-hop, the two artists instantly fell into step with one another. Collaborating for the first time on Mr. Jukes’ 2017 debut album God First on the track ’From Golden Stars Comes Silver Dew’ (also featuring Lalah Hathaway), Barney and Jack have come together to recreate the magic on this new track. The track opens with Mr. Jukes humming a breezy melody over a minimal beat, before Barney bursts through with his characteristically energetic delivery, ’Okay we vibe with it / Open your mind with it / Hoping your people understand and they find spirit.’ His charismatic style draws on some of his key influences, including Kendrick Lamar, Ghostpoet, Kano, and A Tribe Called Quest. The track is designed to uplift listeners and blow away the cobwebs as the world prepares to reopen and have some fun. ’‘Blowin Steam’ happened so organically,’ notes Mr. Jukes. ‘Our first proper session together… the beat immediately connecting with Barney and the lyrics written within hours.’