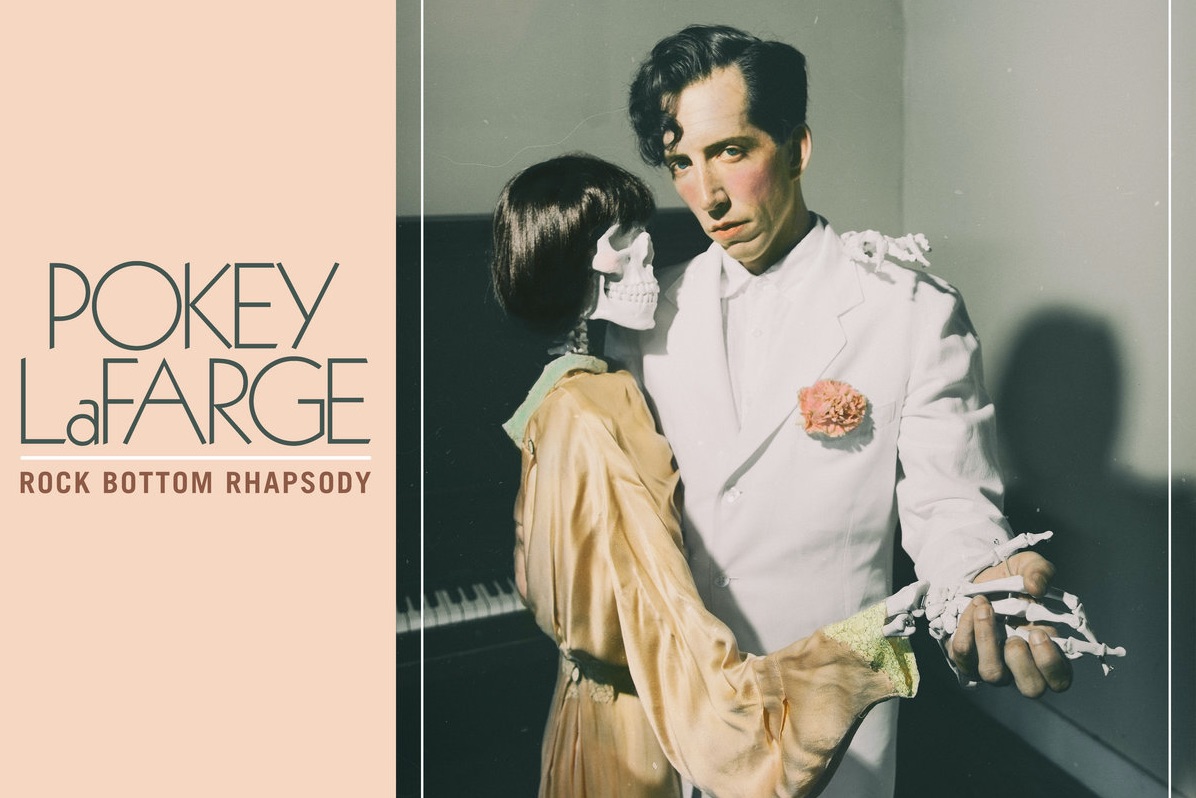 On Friday, I stumbled on Pokey Lafarge’s preview of his new album, ‘Rock Bottom Rhapsody’ on social media, and I listened to a few songs, watching the loving reactions of people and the hearts rising with the streaming.

I only knew the single, ‘End of My Rope’, a nervous clap with a hooky melody built up with guitar, organ and Pokey’s eccentric style bringing rockabilly and harmonies together. It’s undeniably a standout of the album, but the entirety of ‘Rock Bottom Rhapsody’ is begging for attention, not only for its genre-bending and multi-influences inspiration, all standing in the realm of retro, but also for its theme – the album has been described as ‘the perspective of a soul in crisis’ when darkness, temptation, and what Lafarge calls ‘evil spirits and demons’ had taken over his life. In short, it’s pure drama.

If ‘End of My Rope’ sees Lafarge reflecting on his life and missed opportunities as he wishes to die on stage singing the last song he knows, there are plenty of emotions to explore all over this collection of 13 tracks produced by Chris Seefried (Fitz and The Tantrums). ‘Fuck Me Up’ is super retro with a saloon jazzy piano, stamping percussions, handclaps, and doo-wop-y backup vocals, which would work like a Ray Charles track if it wasn’t for Pokey’s singular voice. All-album long Lafarge cultivates a rare sense of rhythms with numerous touches of rootsy music evoking a large variety of styles from pure American folk, soul, blues to French jazz with an exotic touch. He is a crooner in love with the classics from the Everly Brothers to Roy Orbison, adding here and there a touch of ’40s jazz experimentation. On ‘Bluebird’, he could have invited other famous retro-enthusiast, Nick Waterhouse, while other songs have a bit of C.W. Stoneking’s famous jungle blues. The album carries a black & white sentimentality and plenty of melancholia (‘Lucky Sometimes’) from ‘50s-style crooning to Americana ballads, folksy narration, and overall a great cinematic quality, whereas the songs blend and bend ‘roots genres.’ From gentle tunes (‘Just the Same’) to big stomping drama (‘Fallen Angel’), Pokey Lafarge has the voice and the talent to carry all these songs into some timeless place, tip toping between Django Reinhardt jazzy accents or embracing plain doo-wop in ‘Storm-A-Comin.’ The album, which is punctuated by short instrumental epilogues, will surely please any oldies lover.

‘Rock Bottom Rhapsody’ is Lafarge’s 8th studio album and was released on April 10th. ‘This album is about the story of who I used to be,’ he declared after explaining he experienced a spiritual awakening shortly before recording it.

Pokey Lafarge was supposed to be part of a ‘Roots roadhouse’ with John Doe and Exene at the Echo/Echoplex last month. Of course, the show was canceled, but he will hopefully be back soon. He looks like an interesting and eccentric character and you can even see a Coen Brothers vibe in his video for ‘Fuck Me Up.’ Watch it and listen to the full album below: