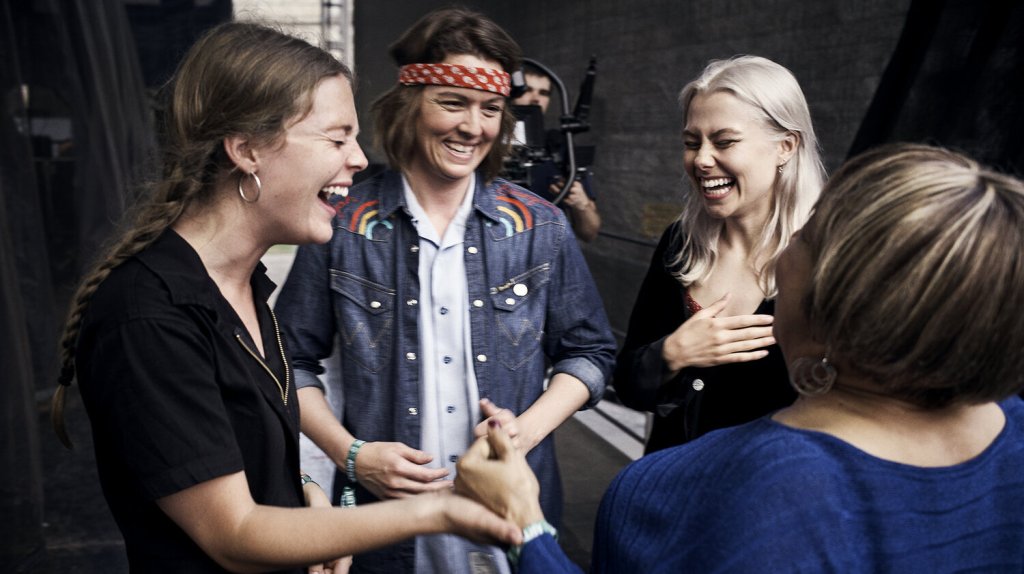 Just before the election, Phoebe Bridgers tweeted she would cover The Goo Goo Dolls’ ‘Iris’ at the condition Trump would lose… As soon as Joe Biden was declared the next elected president, Bridgers executed her promise. Maggie Rogers reached out and offered to help on harmonies, and a Phoebe Bridgers & Maggie Rodgers cover was born on November 13th.

Reworked by Phoebe Bridgers, the song is barely recognizable when it starts with this acoustic fingerpicking, and her lone, distant vocals, then the melody comes back to you when the two women harmonize during the hooky chorus. But the tune takes a slow folksy turn with strings, perfect angelic voices, and delicate acoustic guitars. Gone the ‘90s drama, gone the rhythm section, and gone the gut-punching energy of the original song, however, I honestly didn’t expect anything else. It sounds pretty, especially thanks to the addition of Maggie Rogers’ emotive voice, which demonstrates a much more interesting range than Phoebe’s unidimensional soft whisper. Rogers steals the show and even brings an alt-country vibe – since ‘Iris’ was inspired by a country singer named Iris DeMent it makes complete sense.

Phoebe didn’t say why she chose to cover ‘Iris,’ a song by the alt-rock band Goo Goo Dolls, originally written for the soundtrack of the 1998 film ‘City of Angels’ starring Nicolas Cage, and later included on the band’s sixth album, ‘Dizzy Up the Girl.’ The only reason could be the potential for the song to become a hit for a second time, which seems to be mission accomplished. The song was only made available on Bandcamp for a day – if you go to Bridgers’ Bandcamp, the song has now disappeared – and according to Chart data and Billboard, it sold over 28K US downloads in one day. This impressive one-day number would likely place Phoebe Bridgers & Maggie Rodgers’ cover in contention to become one of the week’s best-selling songs and to contend for the multi-metric Billboard Hot 100 chart.

Meanwhile, the song meaning has little to do with the purpose of this recording. The song is supposed to be about an angel who gives up his immortality to be with a human lover, whereas all proceeds of the downloads for this new cover went to Stacey Abrams’ Fair Fight, that promotes fair elections in Georgia and around the country, encourages voter participation in elections, and educates voters about elections and their voting rights. This is obviously great, even though I do not comprehend why they only made the song available for 24 hours. Wouldn’t it be great to raise more money?

But what does it say about Phoebe Bridgers’ stardom? She is able to repackage an old ‘90s hit and sell it quite well. It’s interesting and remarkable, although I do not completely understand the appeal of owning such a track.