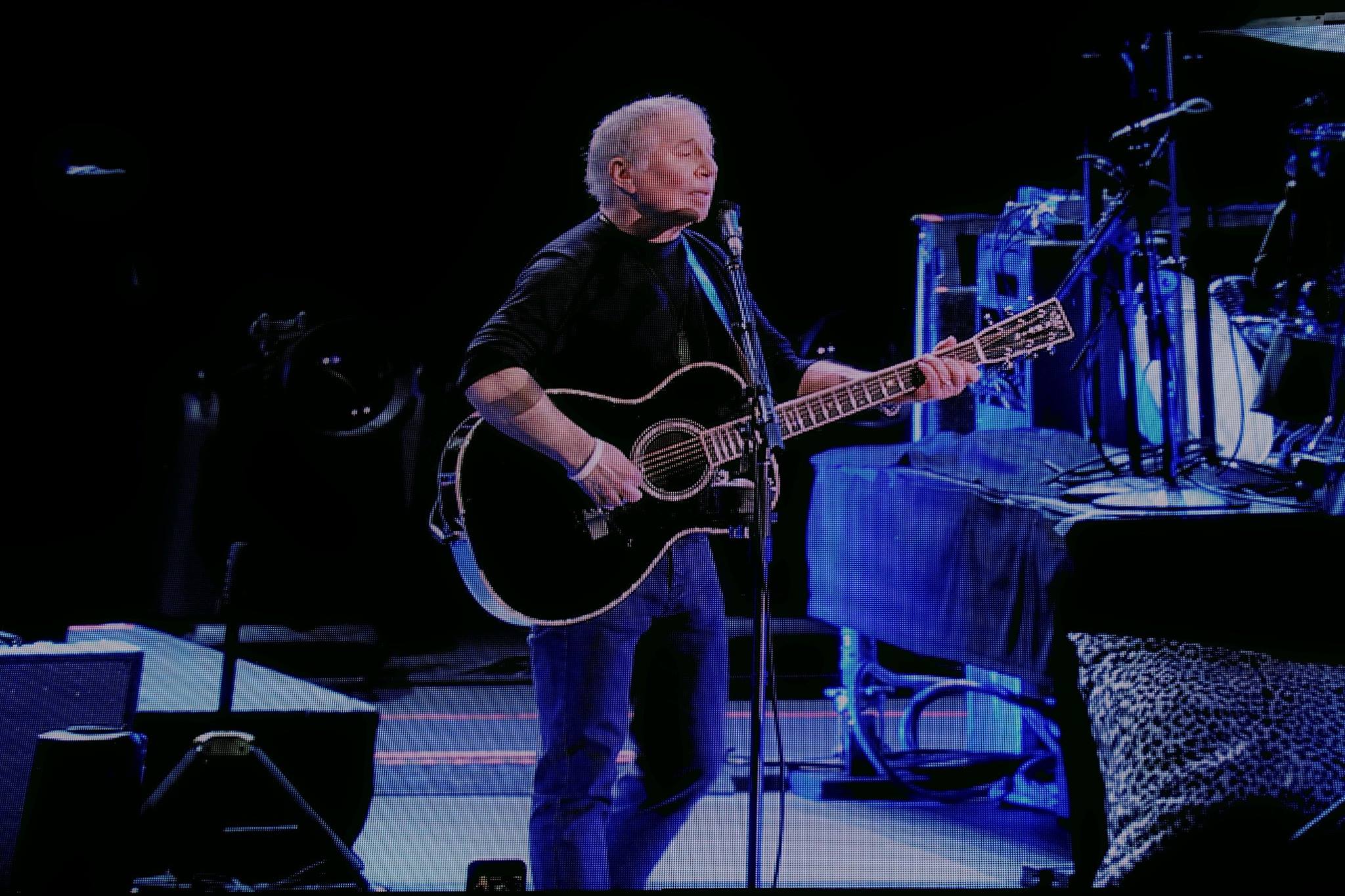 Paul Simon has sold his entire catalog: here performing at the Hollywood Bowl

When I saw the names of Paul Simon, then Bob Dylan trending on Twitter, I worried for a few seconds: both men are 79 after all! However, it didn’t take me too long to find out they were only trending because of this article written by Jeff Slate, and published by NBC News. Like many other singer-songwriters of his generation, Paul Simon has sold his entire catalog to a Publishing company, Sony this time.

‘I’m pleased to have Sony Music Publishing be the custodian of my songs for the coming decades,’ declared Simon in the online statement. ‘I began my career at Columbia/Sony Records and it feels like a natural extension to be working with the publishing side as well.’

The financial deal was not completely revealed but considering that Bob Dylan sold his catalog of 600 songs to Universal Music for more than $300 million, we can assume that Simon also a good amount for his 400 titles, as, like Dylan, Simon sold 100 percent of his songwriting rights. In comparison, ‘Neil Young sold half of his copyrights to Hipgnosis Songs Fund for a price estimated at $150 million, and Stevie Nicks sold a majority of her rights in a deal that valued her catalog at $100 million,’ wrote the New York Times.

Many iconic artists are selling their high-profile catalogs, and whatever the reasons behind their decisions – one logical reason is that they are all getting older and may think it will be easier to divide money than songs – there is absolutely no reason to attack Paul Simon for doing it.

However, this is what Jeff Slate chose to do, as he starts his assassination-piece with the mean statement: ‘He’ll [Paul Simon] still end up a historical footnote to Dylan.’ He continues with the ridiculous idea that Simon sold his catalog just because Dylan did it: ‘Always a ruthless operator, Simon no doubt saw the sale by Dylan to the rival company as a golden opportunity.’

Slate presents Dylan and Simon as two artists in constant competition, and this is honestly laughable: they are both 79 (who is still competitive at that age?) and have been on friendly terms for a long time; they even did a world tour together in 1999, singing each other’s songs, even duetting on Simon’s most famous song, ‘The Sound of Silence.’ Interestingly, when I saw them during this tour, Dylan played first and Simon second, but they cleverly traded places each night, making it clear they were both headliners and openers of each other.

Anyone is free to prefer Dylan to Simon, this is just a question of taste and expectation for music — I hate these types of comparisons — but there is simply no reason to undermine Paul Simon’s work the way Slate is doing it in his opinion piece: ‘And let’s face it: Simon hasn’t had any kind of hit in more than a decade, and he is hardly part of the cultural firmament anymore,’ Slate writes. This is certainly another ridiculous statement, as very few people above 60 have hits: pop culture undeniably belongs to youth. It’s true that Bob Dylan’s ‘Murder Most Foul’ topped the chart last year but it was his first No. 1 under his own name on any chart. It took him 60 years to have a number 1 hit song. And does this devalue his art? Of course not.

Then, saying that Simon’s music is not part of the culture anymore is ignoring plenty of indie music. Sure, you are not going to find much of him in the current rap/hip hop generation, but didn’t Jeff Slate read all these Paul Simon references in reviews of Vampire Weekend? Didn’t Rostam sample ‘The Obvious Child’? Didn’t Bright Eyes’ Conor Oberst call Simon a major influence a few years ago? ‘But as I got into songwriting, I realized how profound what he does actually is. His work over the years is a treasure trove of ideas.’ You hear Simon’s touch in many contemporary songwriters and his name has come up in Fleet Foxes or Iron and Wine reviews… Sufjan Stevens’ own label even described his 2010 EP as ‘a dramatic homage to the Apocalypse, existential ennui and Paul Simon’s Sounds of Silence,’ and David Byrne has also credited ‘Graceland’ with rejoining American music to its African roots

So calling Simon’s music ‘a period curio’ and writing that ‘the vast majority of the songs that Sony bought from Simon will become all but worthless in the not-so-distant future’ simply sounds more like a personal attack than anything else. Any generation ignores the icons of the previous generation, I don’t think many Gen Zs listen to Presley or the Beatles anyway, and so what? Not only Paul Simon packed the Hollywood Bowl 3 times in Los Angeles during his 2018 farewell tour, a 32-date world tour, and, for what it’s worth, the bowl was filled with people of all ages.

A part of the article also tries to pick Simon’s personal life apart, and if it’s hard to find any real scandalous event, the most obvious one is the idea that Simon appropriated world music and acted like an ‘imperialist conqueror’ when he recorded his famous ‘Graceland’ album. Everything has been said on the subject, and the final hug between Simon and Dali Tambo, the South African co-founder of Artists Against Apartheid at the end of the movie ‘Under African Skies’ provides the best answer. Just like Cameroonian guitarist Vincent Nguini, who contributed to Simon’s 1990 album ‘The Rhythm of the Saints’ and toured with him for decades. He had just died when Simon did his farewell tour, but I remember him mentioning Nguini with emotion while presenting his young recruit, an excellent Nigerian musician.