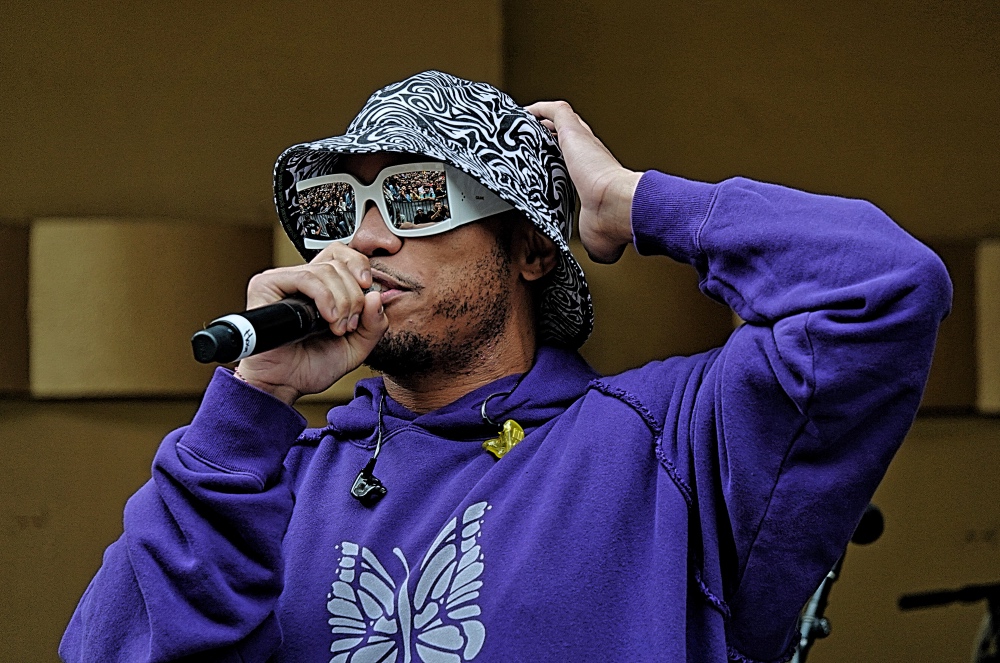 Anderson .Paak has been doing his .Paak House in the park for several years now, and looking at the lineup that unfolded itself in front of thousands of fans’ eyes, this event will certainly grow bigger every year… I was even surprised it wasn’t advertised more and only found out about it because I have recently checked Anderson .Paak’s social media, as he was one of the headliners of Intersect festival in Las Vegas.

For its third year, his .Paak House foundation had organized a free festival in McArthur park, although buying tickets for donations were encouraged… a ticket was giving you several raffle tickets, and the prizes were totally worth it: There were plenty of autographed Anderson .Paak merchandize, t-shirts, headphones and speakers from Dr. Dre, movie tickets for the upcoming movie ‘Spies in Disguise’, a Meet and Greet with Christina Aguilera with tickets for her ‘The Xperience Las Vegas’, a few copies of Rihanna’s new book, VIP tickets for Pharrell’s Something in the Water Festival in Virginia (plus the plane ticket offered)…. Prizes were distributed during the entire afternoon as if we already were on Christmas morning, and a few gems were added, thanks to the generosity of the funny hosts. Actor Anthony Anderson hosted the show for 4 hours, and he added some very special grand prizes, such as ‘hanging out with him on the set of Black-ish, lunch included’ as well as a few $100 bills from his own pocket…

Right away the ambiance was fun and familial, and the fun was also coming from the bright red poster which had spread through social media: instead of revealing the lineup, some imaginative nicknames were listed: Monopoly, NPR Corduroy, California Urchin, Clase Azul, Freddie Krueger, Jaywalking, Queen Emelia, Lightningdog, George Washington, Charlie Brown, Reba Ma, Harley Quinn & Joker, .Frank No Ocean, and The Rest Of Drake’s Set… and many fans had right away guessed (more or less) correctly the real lineup. Before everything started, plenty of people were sure that ‘Monopoly’ was The Game, ‘NPR Corduroy’ was YBN Cordae, ‘California Urchin’ was Kali Uchis, and ‘Lightningdog’, was Thundercat.

The afternoon was punctuated by heartfelt moments and plenty of surprises, such as a marching band walking through the crowd, the J.U.I.C.E. (Justice by Uniting in Creative Energy) dancers showing their amazing skills, followed by Tommy The Clown dancers, another organization focused on hip hop culture as a tool for social change, youth empowerment, and art education… all the people participating were aiming toward the same goal than .PaakHouse’s, whose slogan ‘uplift, engage and support’ was placarded all over the park.

Many of these young dancers came back on stage during Anderson .Paak’s perfomance, some people from the crowd got even invited to show their own moves, as was Anthony Anderson himself. The rest of the lineup included newcomers and big stars like The Game who didn’t miss to mention Tupac, Nipsey Hussle, and Eazy-E.

The young Mereba started with a cover of ‘Redemption Song’ with her guitar, then rapped over her folk-soul hybrid sound with the help of Anderson .Paak on drums and Thundercat on his pink bass. The sets were kept short, just two songs at best, in order to pack the impressive lineup in one afternoon, from noon to 4 pm, however, the collaborations seemed endless. Soon after the very elegant R&B artist Emily King, who received two Grammy nominations for her song ‘Look At Me Now’, Kamasi Washington on sax, Thundercat on bass, The Free Nationals’ Maurice Brown on trumpet and Anderson .Paak on drums were the very prestigious house band for some jazzy experiment.

With her ultra-short skirt, Kali Uchis made a very noticed appearance, singing with her sweet and soft R&B vocals, she immediately covered No Doubt’s ‘Say That You Love Me’, leaving me a bit unimpressed despite the high volume of applause she received.

Funnyman Seth Rogen made an appearance to help Anthony Anderson with the raffle tickets and offered a special price ‘a smoke break with Seth’, whereas, Anderson and the Nationals treated us with more soulful music between the raffle episodes. If the first part of the show was very jazz-R&B oriented, after the appearance of Freddie Gibbs and his fast flow, the show turned to hip hop with a succession of rap stars from Jay Rock to Blueface, The Game, and YBN Cordae… They were certainly commanding attention, and put the crowd on fire, especially Jay Rock. Anderson rapped with all of them for everyone’s great pleasure, and at this point, the show could have looked like a mini Rolling Loud. It was especially true when the young rappers came on stage. Despite their short sets, you could feel the heat and the energy coming from the crowd when Blueface, constantly holding his falling pants, was walking the stage and when YBN Cordae was jumping all over the place side by side with Paak… It was a joyful spectacle no matter who was on stage, but Cordae was presented as the new young face of hip hop, while he couldn’t stop thanking and hugging Anderson, who had ‘presented him to Dr Dre’.

Everyone was backed by the Free Nationals band, and, contrarily to big festivals, there was a loving sense of community as entire families with babies were in attendance. Last year, .Paak managed to raise more than $155,000, and I bet he did even better this year. If the Game’s Jayceon Terrell Taylor told us Anderson was the only guy who ‘truly cares about people’, raising money while throwing a free festival in a park located in one of the most overlooked neighborhoods of Los Angeles is certainly caring, a lot. ‘The people who are registered lower income don’t really get exposed to world-class shows,’ has declared .Paak a few years ago. Anderson .Paak and Thundercat, who interestingly both participated in a world-class show in Las Vegas last week (the Intersect Festival) spent some time signing autographs after the show, looking as down-to-earth as you can imagine, while the entire afternoon looked like a sincere gift to the community. 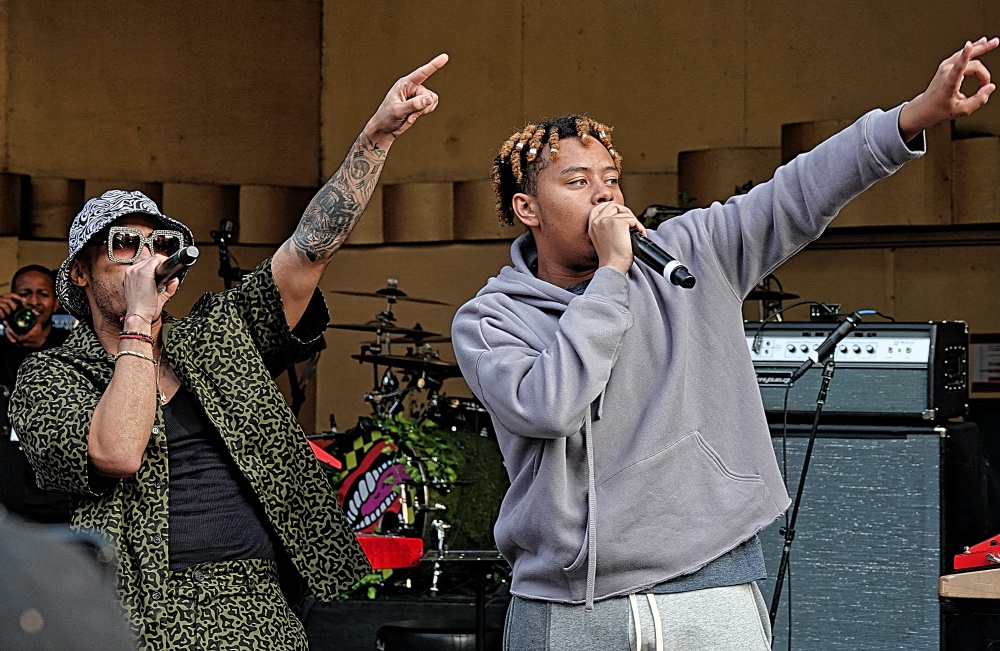 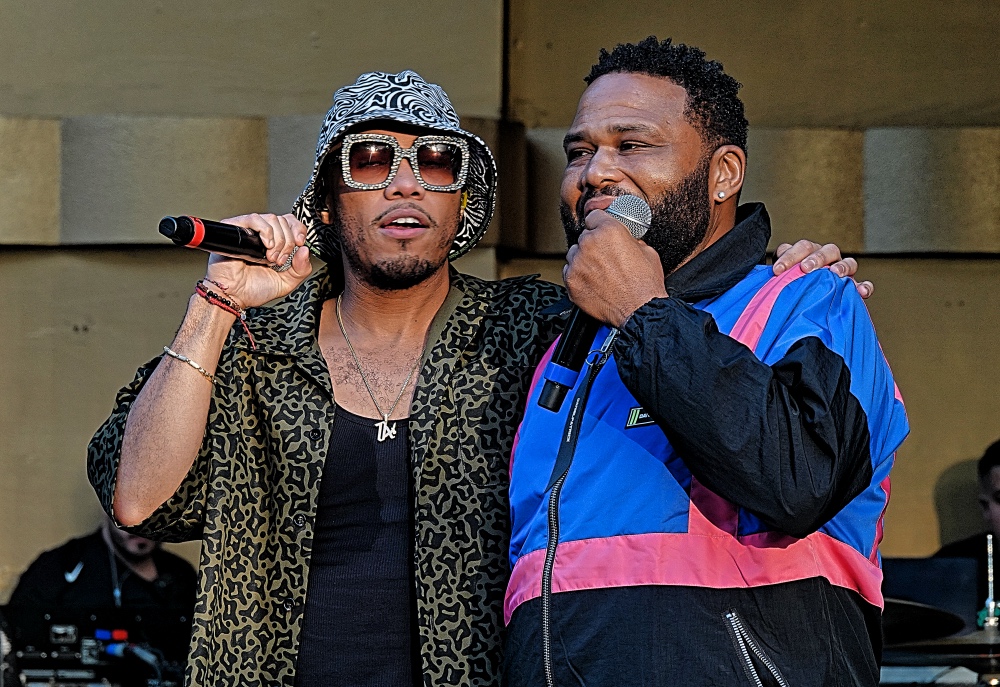 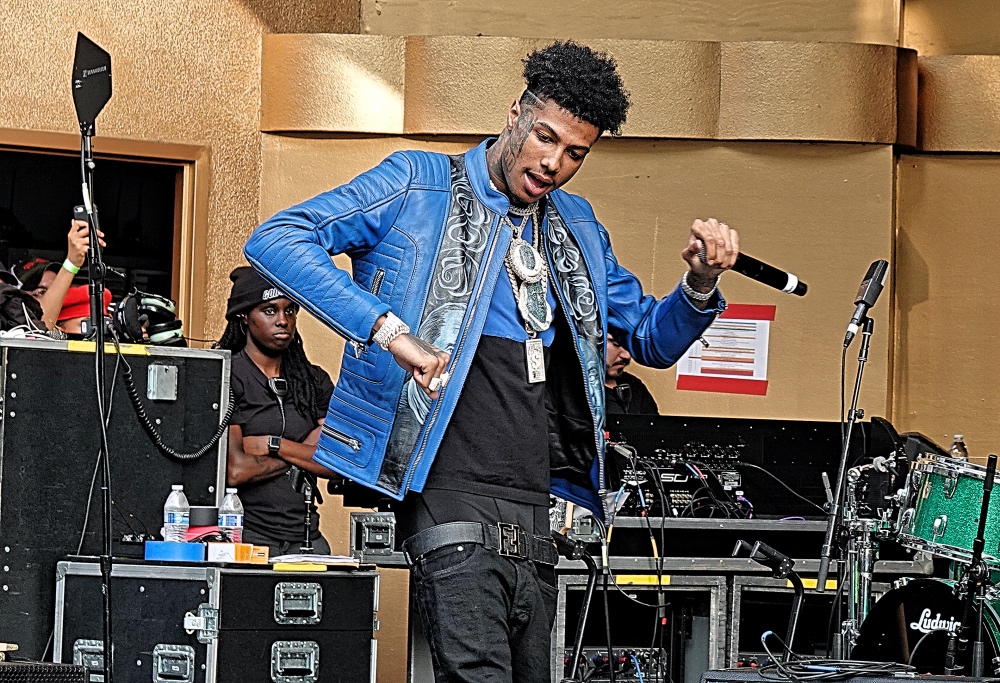 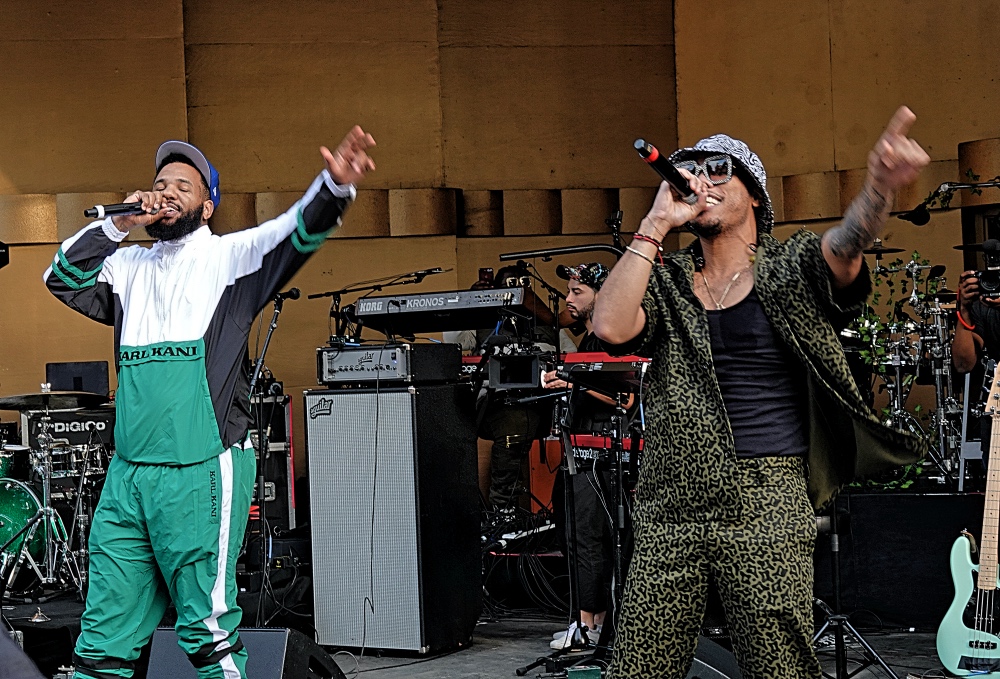 The Game and Anderson .Paak 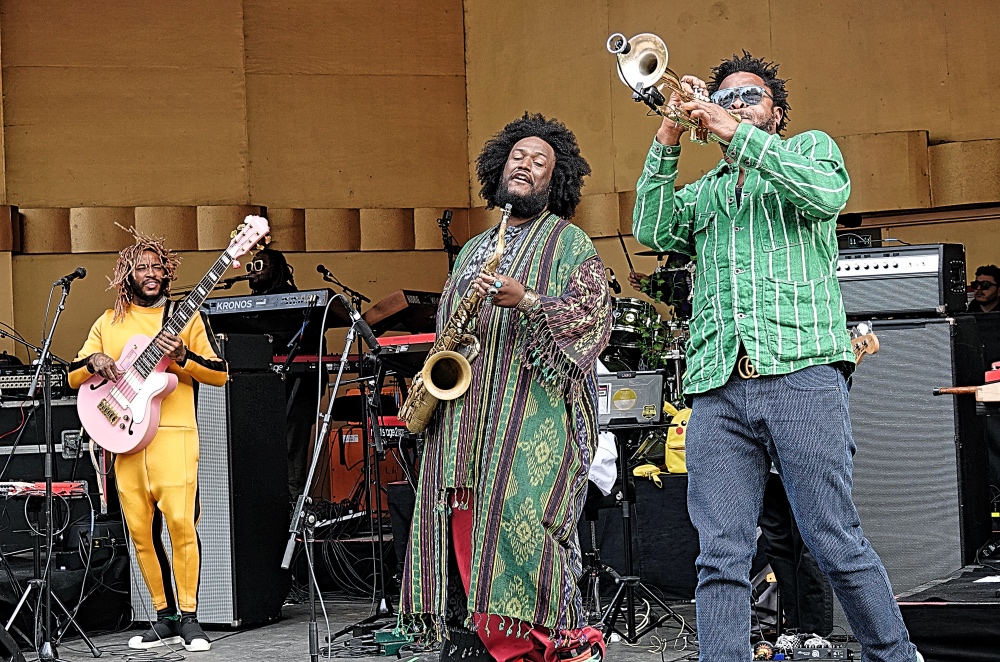 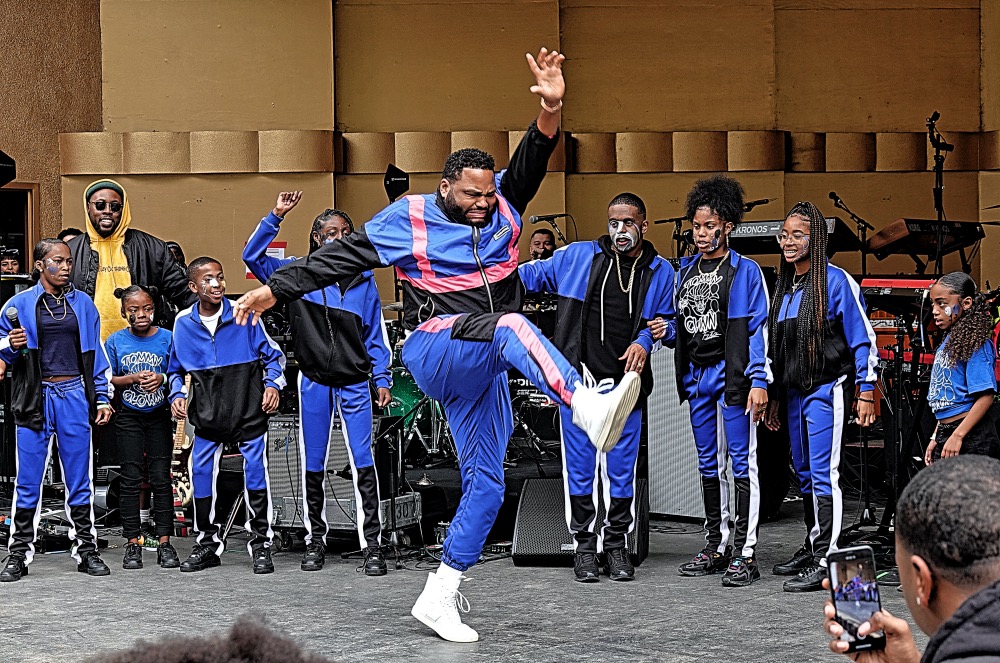 Anthony Anderson with Tommy the clown 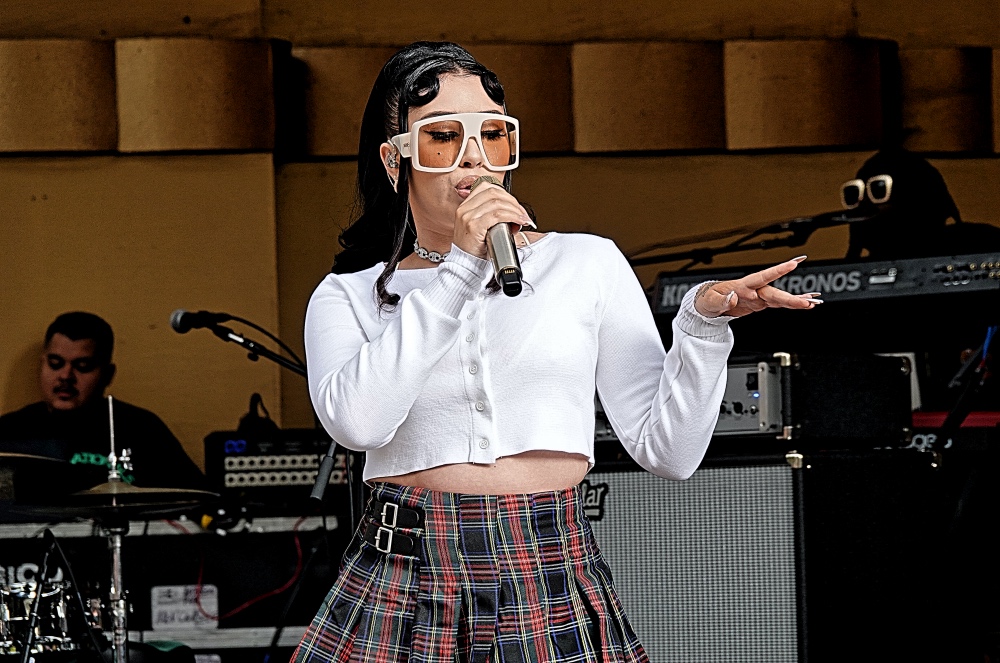 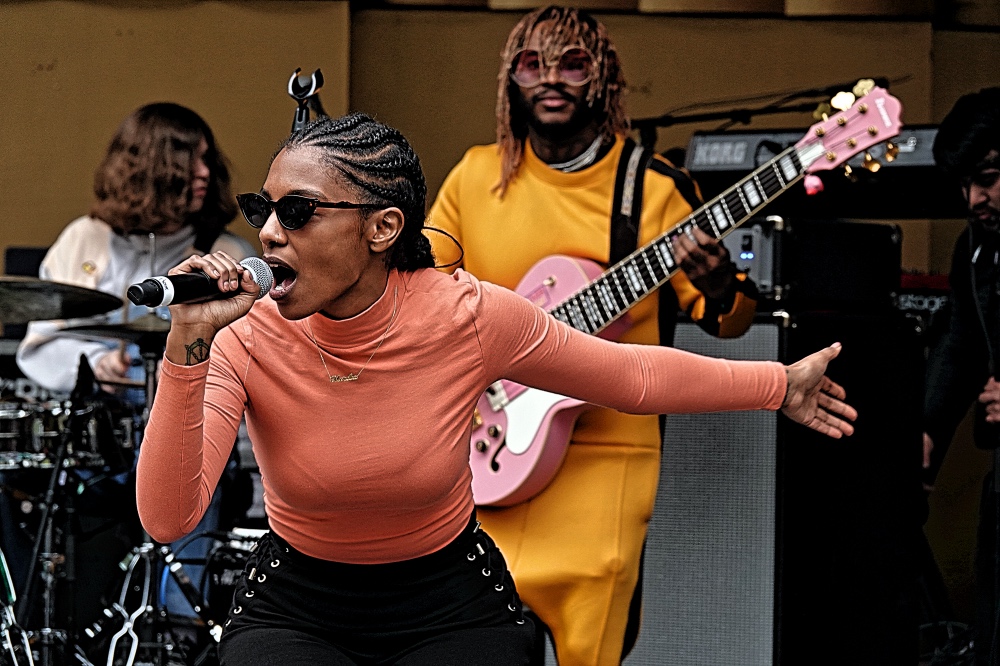 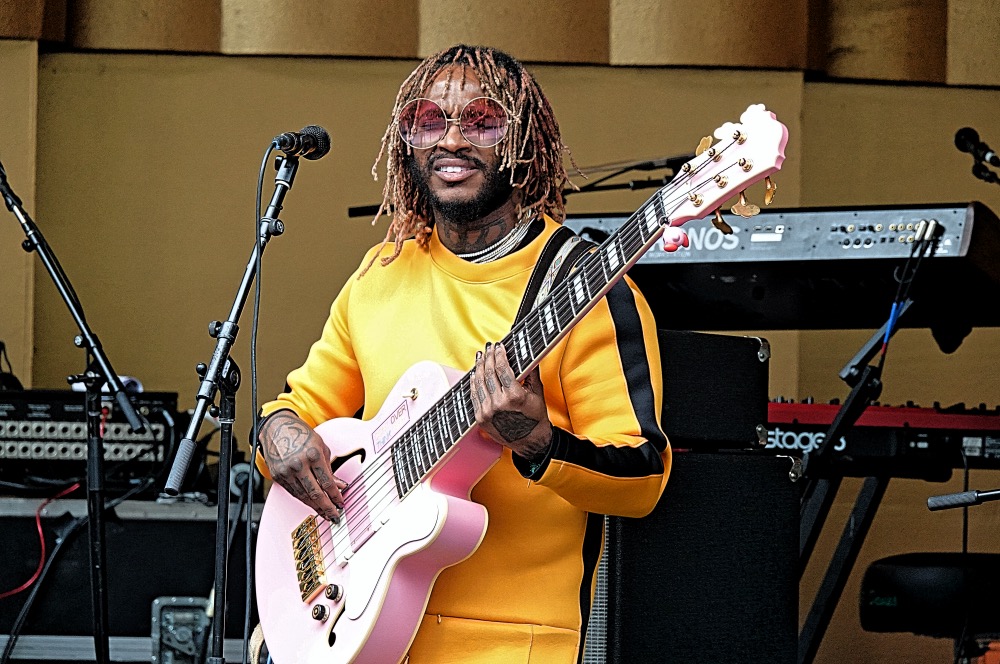 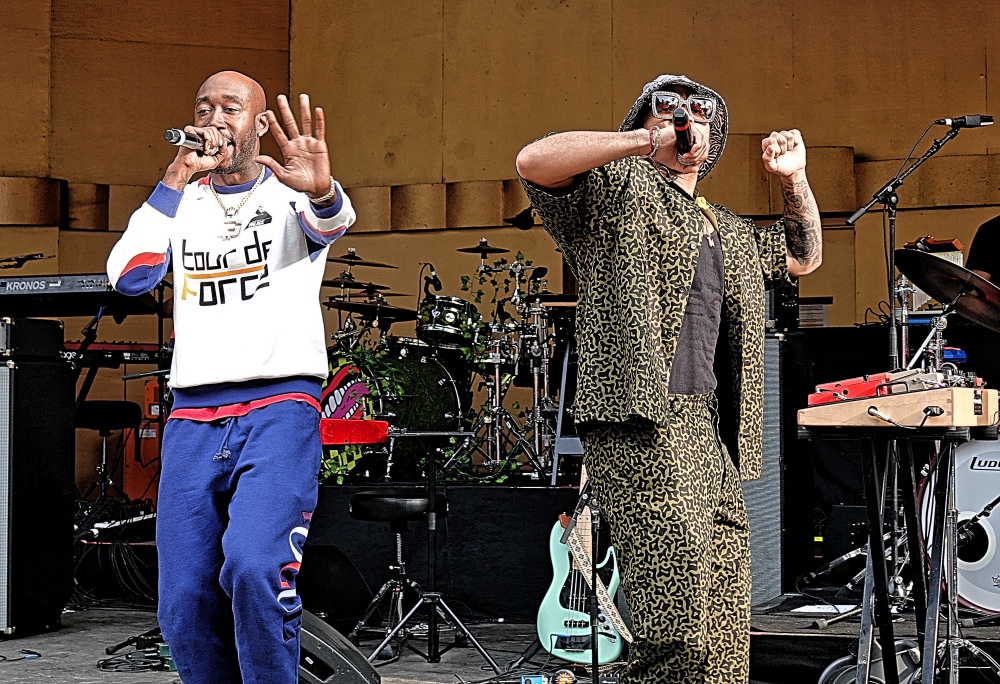 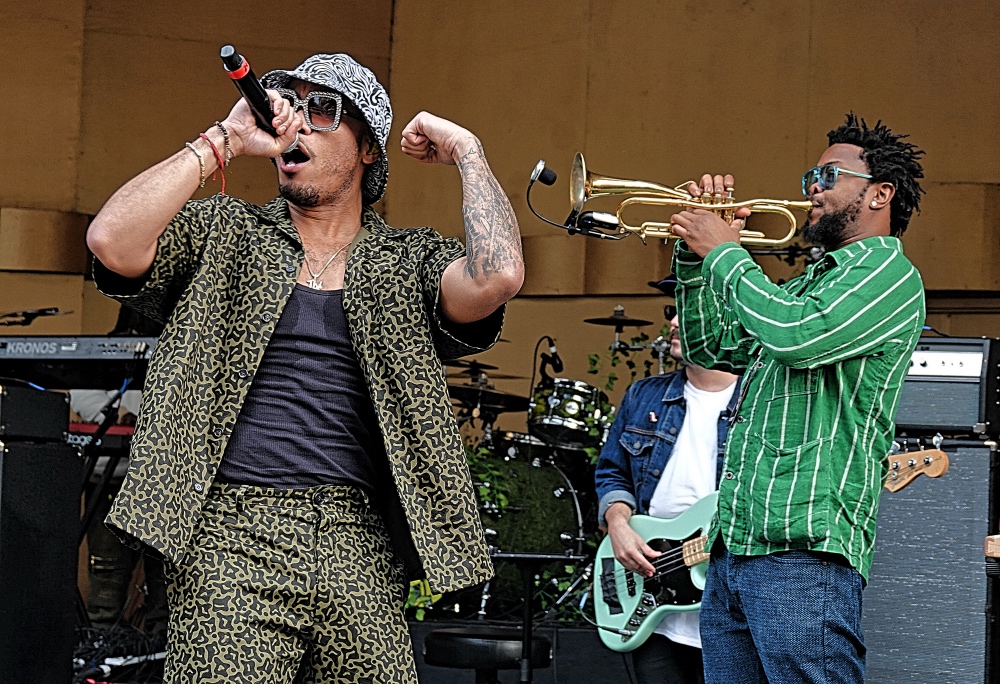 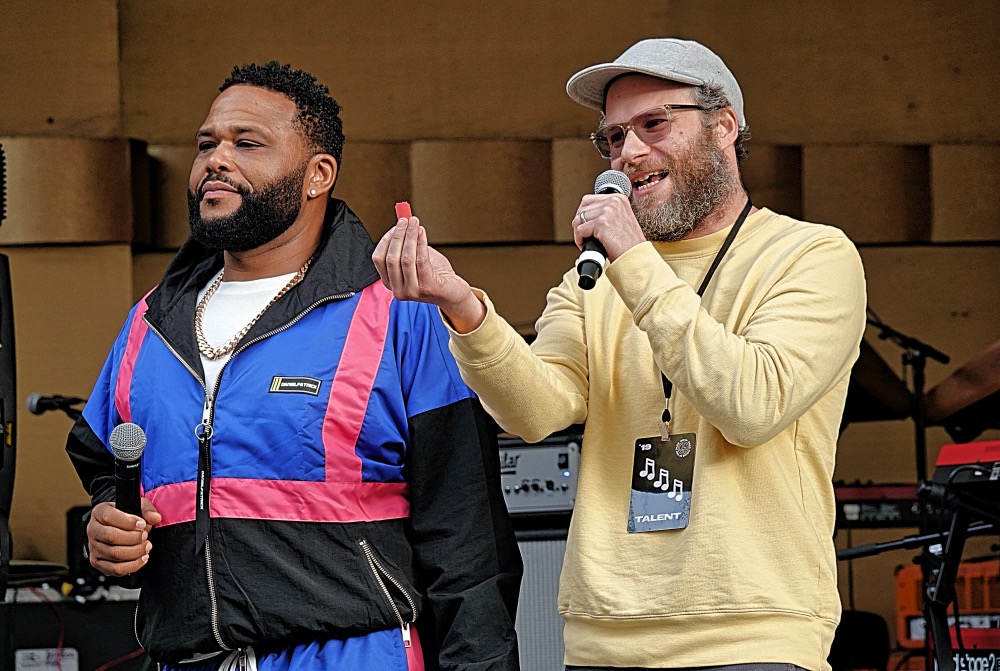 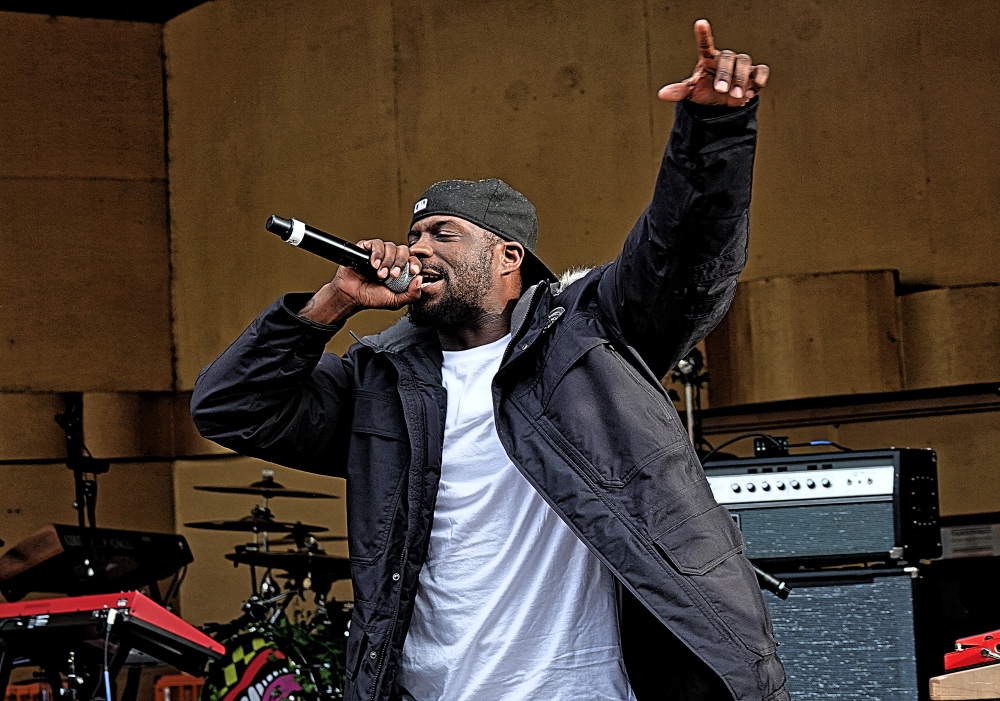 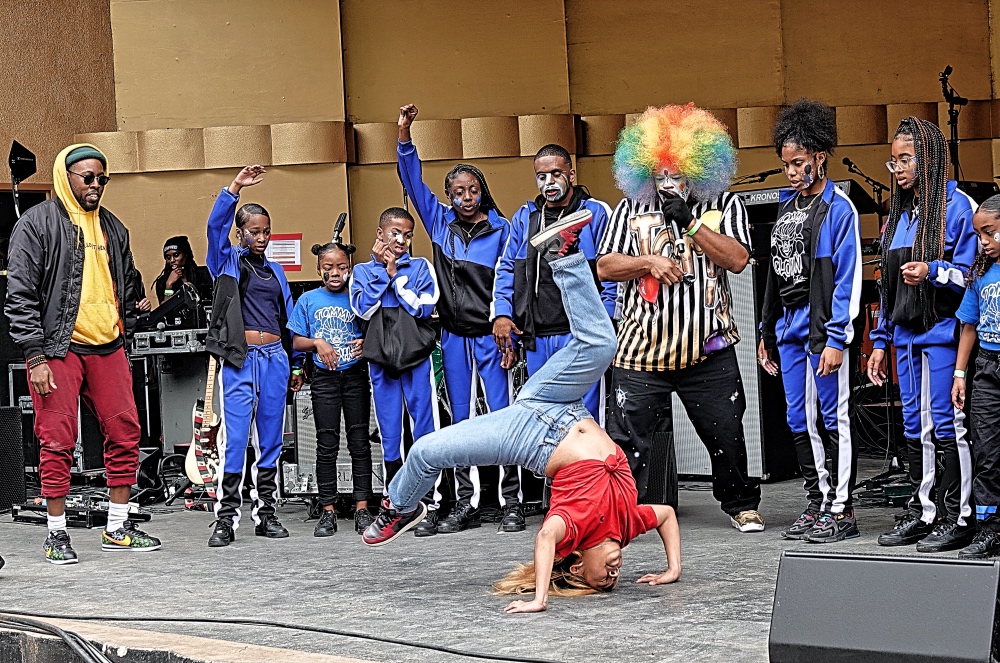 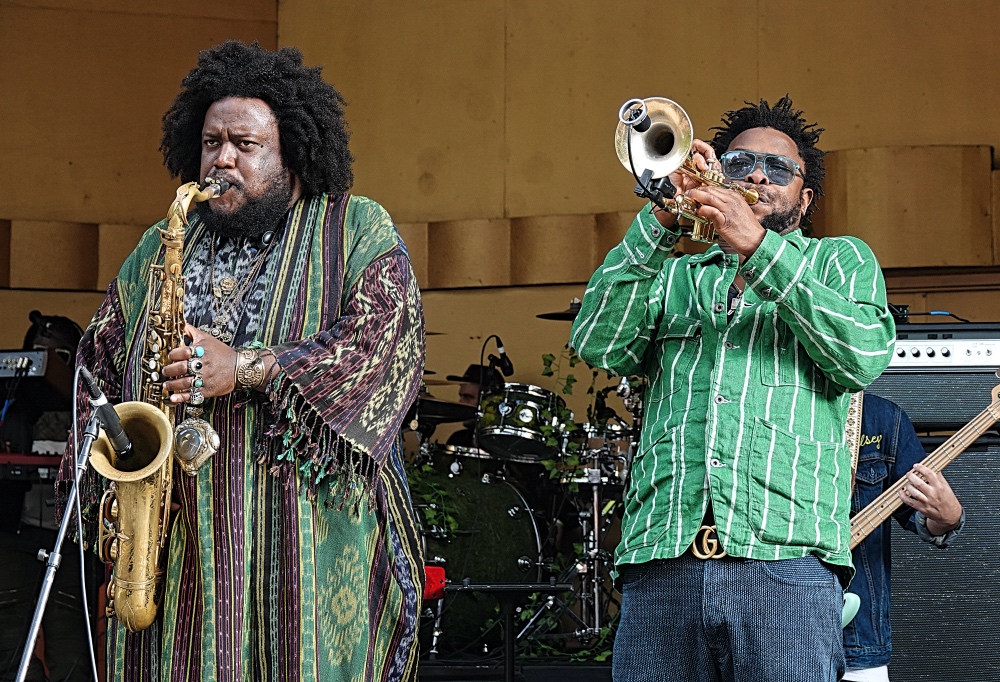 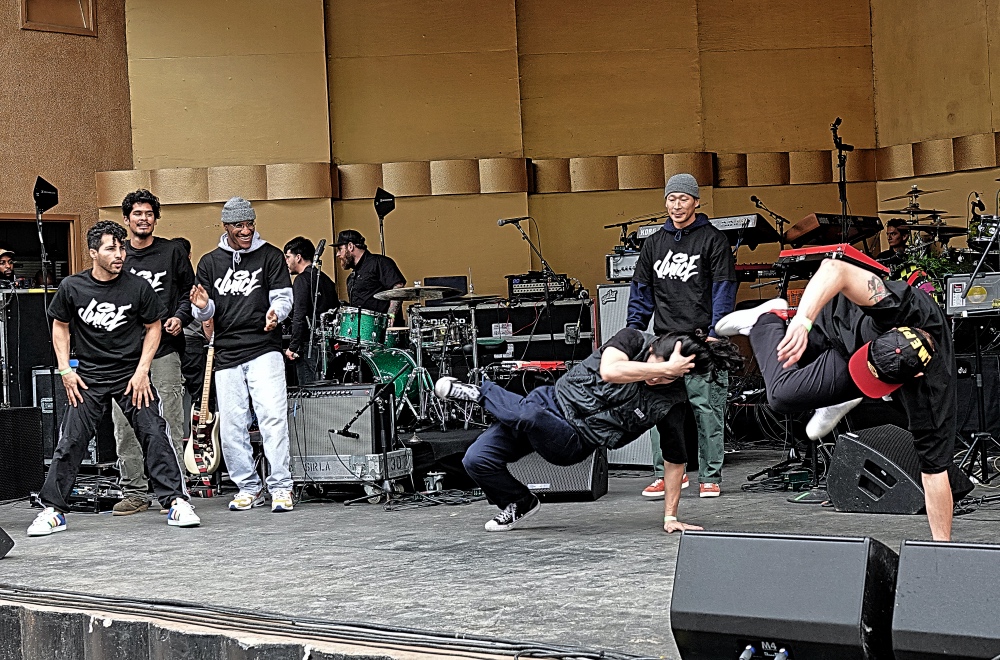 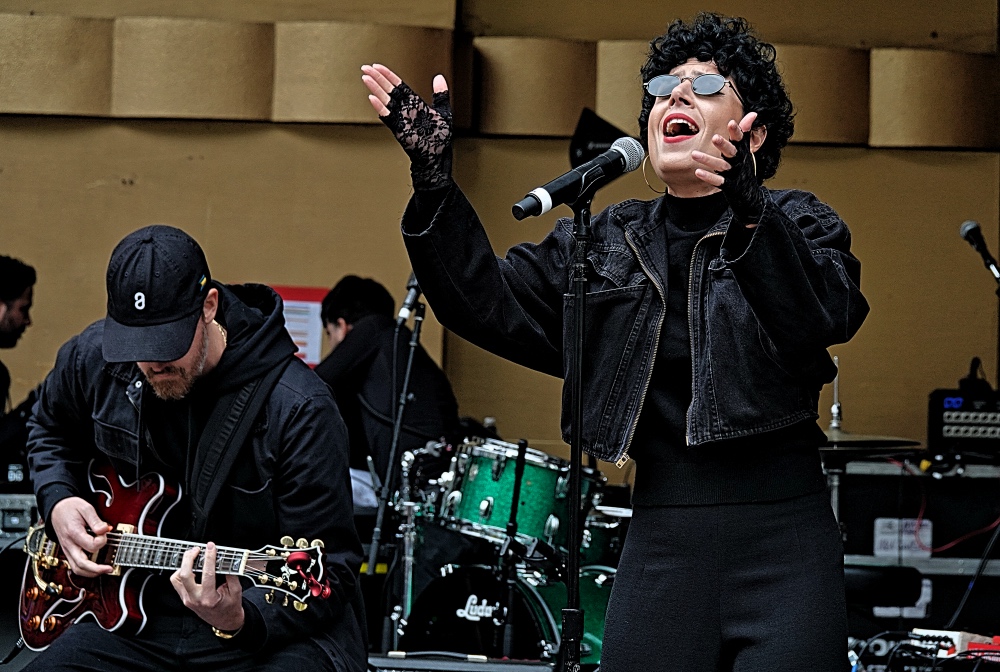 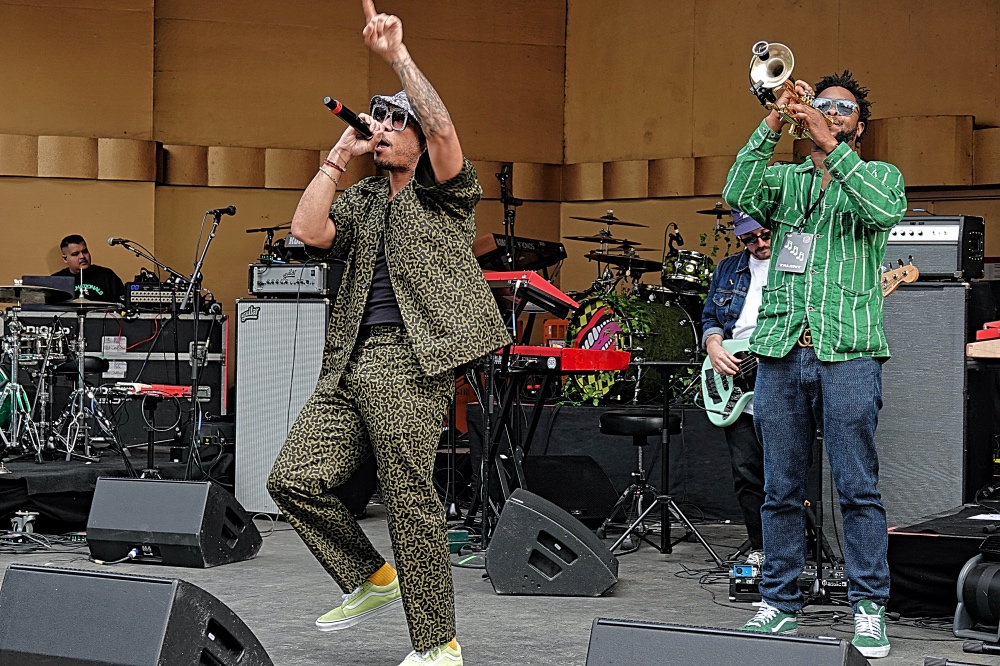 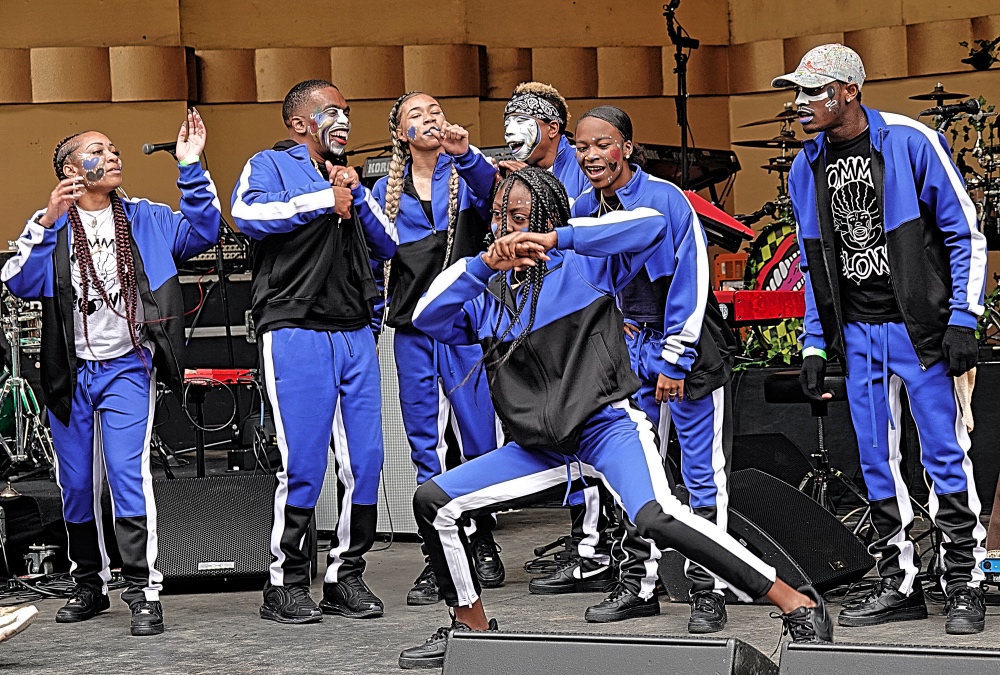 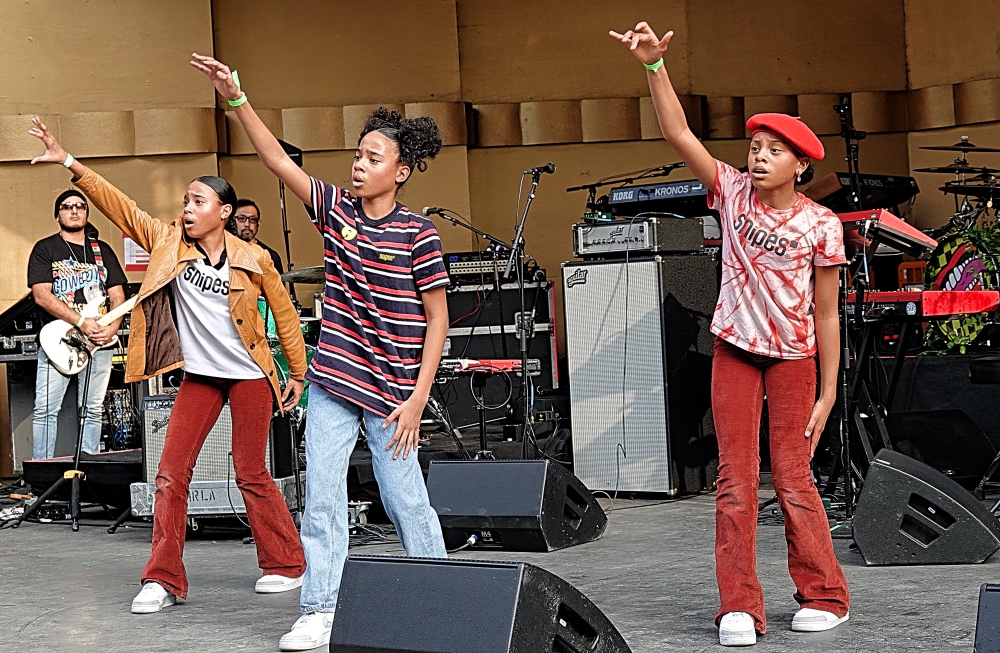 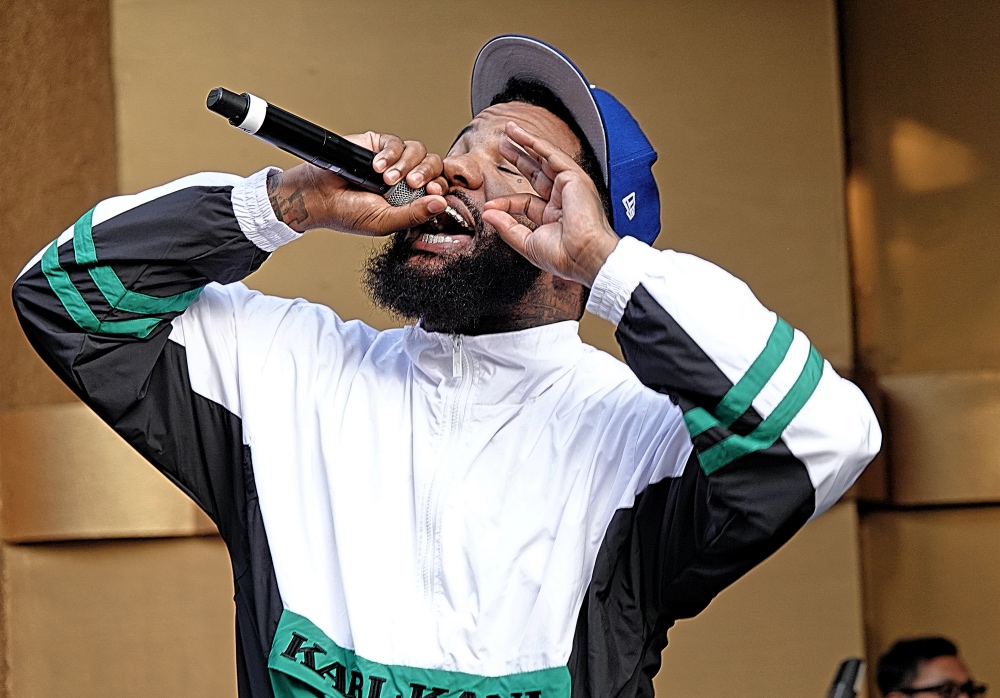 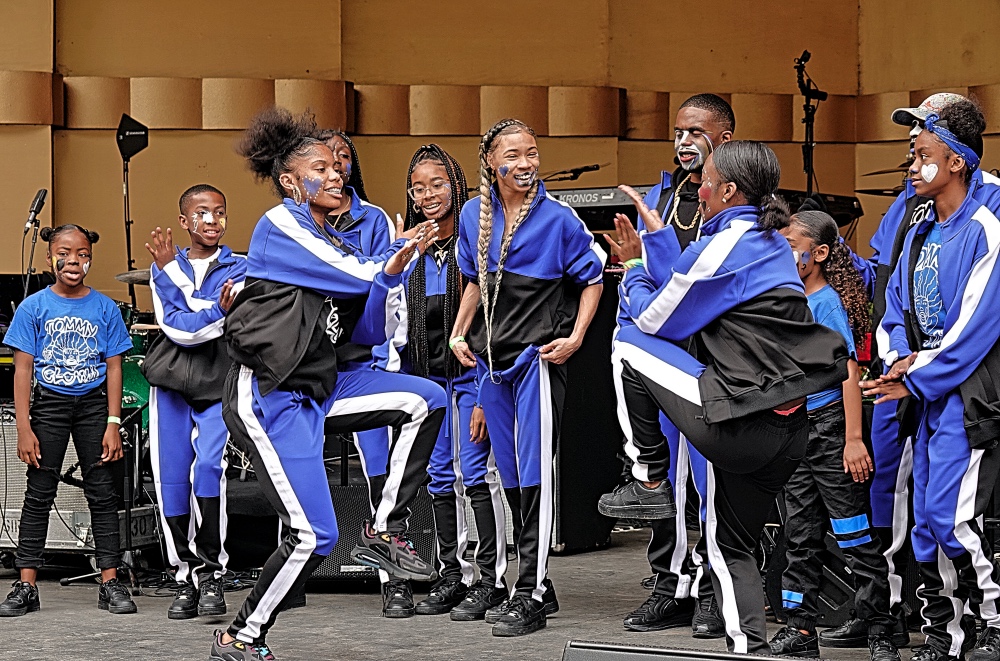