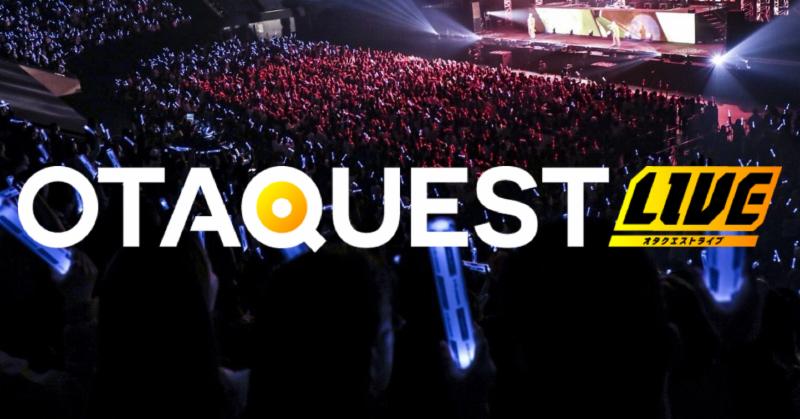 OTAQUEST, a one-night-only concert and cultural event in Los Angeles will launch Wednesday, July 3 at The Novo in L.A. Live (800 W. Olympic Blvd., Los Angeles, CA). OTAQUEST was created to bring the latest in Japanese culture featuring Music, Anime, Gaming, Fashion and more to the U.S. OTAQUEST events reflect what is of-the-moment in Japanese culture and celebrate the latest and greatest from Japan’s diverse music scene with the most successful artists out of Japan today.

Tickets for OTAQUEST LIVE and OTAQUEST KICKOFF are available now:

Check out all of the artists performing at OTAQUEST LIVE and OTAQUEST KICKOFF below:

m-flo: From the underground to the mainstream with everlasting drive, the dance trio m-flo took the Japanese music scene by storm. m-flo fuses ☆Takuʼs exceptional production ability, the rhythmical flow of VERBAL and LISAʼs expressive vocals struck success out of the gate with their major debut, the maxi-single titled the tripod e.p. (1998). The collection earned them an instant spot in the Top 10 of the Oricon charts as was followed with 12 successful singles and two hit albums including EXPO EXPO which sold over 800,000 copies in Japan alone. After LISA’s departure for a solo career, VERBAL and ☆Taku continued together as m-flo and released the “Loves” series; a collection of songs and collaborations with different artists. m-flo performed headlining solo shows at Nippon Budokan in 2005 and Yokohama Arena in 2007 as well as appearances at “ROCK IN JAPAN FESTIVAL” and “SUMMER SONIC.” In 2017, the original trio reunited after 15 years and celebrated their 20th anniversary in 2018 once again bringing fresh air into Japanese mainstream music.

CAPSULE: CAPSULE is the main production unit of Yasutaka Nakata. Formed with Toshiko Koshijima in 1997, they debuted in 2001. An exciting all-in-one music group which shares their creativity in music as well as fashion and beauty. Yasutaka Nakata writes, composes, and arranges all of the music himself. CAPSULE has performed captivating shows at many large-scale, festivals worldwide with stunning video, audio, and lighting. CAPSULE has produced for Perfume, Kyary Pamyu Pamyu, and the “Star Trek : Into Darkness,” “Liar Game” and “Apple Seed Alpha” soundtracks, amongst many others. Listen to CAPSULE: http://capsule-official.com, https://www.facebook.com/CAPSULE.OFFICIALhttps://twitter.com/CAPSULEOFFICIAL and https://www.youtube.com/user/CAPSULEOFFICIAL

TAKU, aka Taku Takahashi launched his career in 1998 as the DJ/Producer of the J-pop music group m-flo. The group quickly rose to prominence, sold over 2 million copies and released 30 singles and 10 albums. Taku Takahashi is well known for his solo work as a producer/songwriter, remixing music for prominent artists such as Calvin Harris, The Ting Tings, Morgan Page, SMAP and others spanning various genres from all over the globe. TAKU was awarded the “Beatport Music Awards 2011 Top Tracks” with his “Incoming… TAKU Remix,” and is as an elite player in the Japanese dance music scene. Taku Takahashi served as music supervisor to the soundtracks for the hit Japanese anime “Panty & Stocking with Garterbelt” as well as making waves in the industry for his work with the drama/movie ‘’Nobunaga Concerto.’’ In 2011, Taku Takahashi embarked on his most ambitious venture yet, establishing Japan’s first and only Dance Music Radio Station block.fm. With upwards of 40 programs including exclusive mixes from world-famous international DJs, block.fm rapidly continues to grow. Taku Takahashi was voted the number 1 DJ for three years in a row, by Japan’s most well-known dance music publication “iLOUD” in their annual “DJ 50/50” top DJ list. Listen to TAKU, aka ☆Taku Takahashi: https://www.youtube.com/watch?v=MAH3j3BU-Ek and http://twitter.com/takudj, https://www.facebook.com/takudj/m-flo.

Kyary Pamyu Pamyu: The most followed Japanese artist on Twitter and one of Japan’s most influential pop icons, J-pop superstar Kyary Pamyu Pamyu made her major debut with Warner Music Japan just out of high school with the Moshi Moshi Harajuku EP, produced by Yasutaka Nakata (CAPSULE). Kyary released her full-length solo debut Pamyu Pamyu Revolution (2015) scoring her first #1 spot on the Oricon charts, iTunes Japan charts and Worldwide Electro charts. Kyary launched a nationwide tour with a solo event at Nippon Budokan and an appearance on the NHK Uta Gassen. Her second full album Nanda Collection garnered her another #1 spot on the weekly Oricon charts and selling over 400,00 copies. After this, at the end of her hugely successful 2nd world tour her 3rd album Pika Pika Fantajin was released simultaneously across 15 countries and regions including North America, Europe, Oceania, and Asia. In 2018 Kyary launched her 4th world tour and released her 4th album Japamyu to success. Often sited as Japan’s Lady Gaga, Kyary is one of the few J-Pop stars to cross over to the West, garnering accolades from Katy Perry, Ariana Grande and Charli XCX. Kyary also curated an exhibition, The World Goes Pop, for the Tate Modern Museum. Kyary’s style, presence and originality as a “HARAJUKU” icon combined with her artistic activities and sold-out arena tours continues to attract her attention from all over the world. Listen to Kyary Pamyu Pmayu: https://www.facebook.com/KPP.FC/, http://kyary.asobisystem.com/english/, https://twitter.com/pamyurin and https://www.instagram.com/kyarypappa/.

Yasutaka Nakata of CAPSULE (DJ set): The leading figure in the Japanese electro scene, Yasutaka created the style of “kawaii” electronic music. As a producer, he brought artists such as Kyary Pamyu Pamyu and Perfume to the eyes and ears of the world. Yasutaka started CAPSULE in 2001 and has influenced and inspired artists across the world including Madeon, Porter Robinson, Sophie (PC Music), with his music. Yasutaka provided the Ultra Music Festival worldwide official anthem under his solo name, a first for a Japanese artist. He also provided music for the 2016 Rio Olympics closing ceremony and also had a featuring track with the world-famous pop superstar Charli XCX with the song “Crazy Crazy.” He created remixes for ZEDD and Steve Aoki, and co-produced a song with director JJ Abrams for the Hollywood film “Star Trek: Into Darkness.” He also provided the theme song for the movie Nanimono with the song “NANIMONO (feat.Kenshi Yonezu)” and the end-title “Bokura no Network” for the game “Dragalia Lost” under the name DAOKO x Yasutaka Nakata. Last year, he released, Digital Native which featured the colorful track with vocal cut-ups “White Cube.” and garnered a #1 debut spot on both the overall and electronic charts on iTunes. From games to movies to pop scenes, his activities are diverse with a unique style centered on the club scene. Listen to Yasutaka Nakata: https://www.instagram.com/yasutaka_nakata/?hl=ja and https://www.youtube.com/channel/UCMWYqSmaxiqzpuBuFKbTTMg.

TEDDYLOID: At the age of 18, producer and DJ TEDDYLOID acted as DJ and sound producer for the recording artist MIYAVI on his world tour of 13 countries. He produced the soundtrack for the Anime TV series “Panty & Stocking with Garterbelt” along with Taku Takahashi. He engineered and produced songs for the pop idol group Momiro Clover Z. TeddyLoid released his debut solo album BLACK MOON RISING which was followed by his sophomore album SILENT PLANET a collaboration featuring Yasutaka Nakata of CAPSULE, Hisashi of GLAY, Tetsuya Komuro, Ryohei Shima (the dress codes) and Ayaka Sasaki. He has produced video game soundtracks for the Playstation 4 game Destiny 2 and the EXTRA BASS series for Sony. TeddyLoid has been recognized as one of the Top 5 most-played Japanese artists on Spotify alongside RADWIMPS, BABYMETAL, ONE OK ROCK and PICOTARO. TeddyLoid completed a successful world tour in 2018.

CRAZYBOY, is the hip-hop project of ELLY, who made his debut as part of the J Soul Brothers III. He released his first EP titled NEOTOKYO, which successfully debuted at #1 on four major distribution sites. NEOTOKYO II debuted at #1 on both iTunes and mu-mo charts. He collaborated with hip-hop legend SNOOP DOGG and PKCZ® (VERBAL / DJ MAKIDAI / DJ DARUMA) on the track “BOW DOWN FT. CRAZYBOY from EXILE TRIBE.” The song was released from the Dutch dance music label Spinnin’ Records/Trap City and garnered worldwide acclaim. CRAZYBOY has also appeared on tracks from “Shinichi Osawa,” the hip-hop icon “ANARCHY” and dance hall reggae masters “Mighty Crown.” In 2019 he competed against 50 teams and placed 10th in The Summer Smash at the Australian Open for “Fortnite” the Epic Games Battle Royale Action Building Game live gaming competition in Melbourne, Australia. Listen to CRAZYBOY:http://crazyboy.jp, twitter and Instagram @elly24soul and https://www.youtube.com/channel/UCbEutdoNcdNFEVKKQzGS2Mw

HIROOMI TOSAKA: is an actor, solo artist, and vocalist and released his major label debut in the Japanese pop group J Soul Brothers III from EXILE TRIBE with their first single, “Best Friend’s Girl”. In 2017 he released his first solo single, “WASTED LOVE” and last year he his first full-length album, FULL MOON was released. From August to December 2018 he held his first solo arena tour, “HIROOMI TOSAKA LIVE TOUR 2018 FULL MOON” which successfully attracted 270,000 people at 23 shows across 11 cities. HIROOMI developed a clothing line “CLAIR DE LUNE,” in which he expresses his world view drawing inspiration from a range of different cultures. His acting career launched in the film Hot Road, directed by Miki Takahiro, and won the Newcomer Award in 4 Japanese film festival ceremonies including the Japan Academy Prize. Recently, he starred in the romance film Yuki no Hana which was released in February of 2019. An author, HIROOMI released the photo essay book NOBODY KNOWS, to great success selling more than 180,000 copies in its first run. Listen to HIROOMI TOSAKA: https://twitter.com/hiroomi_3jsb_, https://www.instagram.com/3jsb_hiroomi_tosaka andhttps://www.youtube.com/channel/UCwjuPHBb3ZoncVeGoV1FSVg.

About LDH USA:
LDH USA Inc was established to further broaden Japanese culture across the globe.
EXPG NY was established in NYC in 2014 and serves as an artist development center focusing on training young talents the art of dance, vocal and acting. In January 2019, EXPG LA in Hollywood was established, and partnered with mL studio (Movement Lifestyle) one of the top dance studios in LA. The LDH roster includes the enormously successful EXILE, J Soul Brothers III, GENERATIONS, and legendary international Japanese act, m-flo. LDH Japan operates 14 dance schools and artist development facilities known as EXPG to inspire youth and foster talent, 12 restaurants in Japan, 9 fashion brands including renowned jewelry and apparel brand AMBUSH, and HUMAN MADE–a partnership with LDH, Pharrell Williams and NIGO®. LDH USA is a part of the LDH global initiative which strives to share the LDH philosophy of “LOVE DREAM HAPPINESS” with the world and replicate the enormously successful live shows that LDH produces in Japan including full stadium tours which draw 50,000+ attendees per show and over 1.5 million guests per tour. USA: https://www.ldh.co.jp/eng/usa/ JAPAN: https://www.ldh.co.jp/eng/