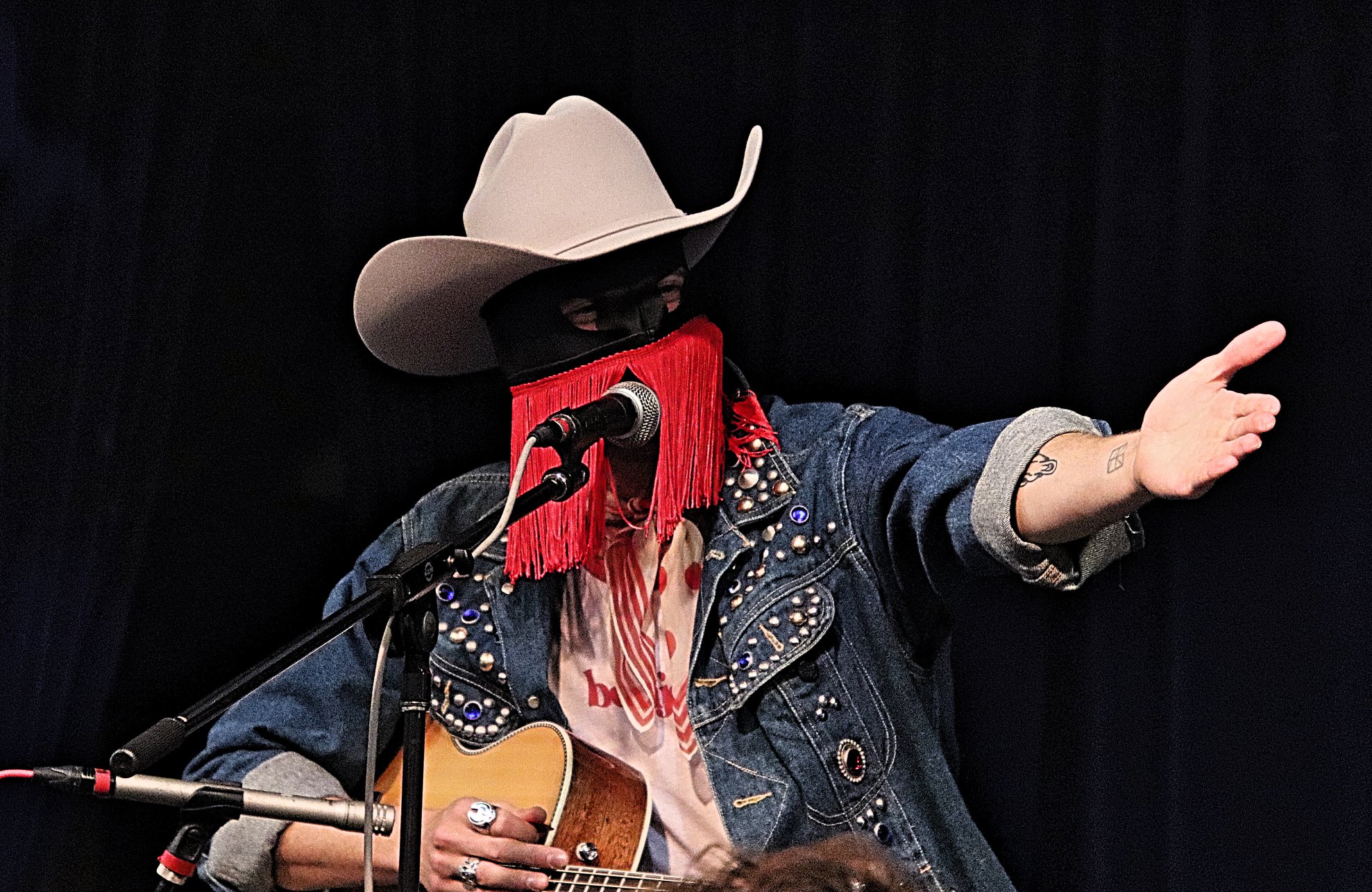 Orville Peck is having fun with America’s most powerful stories and most beloved myths: he is the lonesome cowboy riding away in the night, he is the mysterious hero hiding his face behind a mask, and he is the crooner with a strong and vulnerable voice showing shades of our music icons, from Elvis to Morrissey.

This year, Orville released an album, ‘Pony’, which twists the myths of the old west in an effortless manner, and if you were in love with Zorro or the Lone Ranger when you were young, there are a lot of chances you will be fascinated by his persona.

Last Monday, during a packed-to-the-roof acoustic set at Amoeba, the Canadian singer-songwriter covered the Ned Sublette song popularized by Willie Nelson, ‘Cowboys Are Frequently, Secretly (Fond of Each Other)’, and when saying that the song was a perfect fit for him, he added with humor, ‘That’s right, unless you didn’t know, I am a cowboy!’

Indeed, Orville wears cowboy boots and hat, but he hides his entire face behind a leather fringed mask, that he wears at each one of his public appearances… and this could appear like another gimmick if the music wasn’t so good. ‘There’s a lot of theatricality to what I do and that’s purposeful,’ he said in an interview. ‘It’s ironic because, at the same time, I truly believe this project is the most sincere thing I’ve done artistically, the most exposed that I’ve ever been as a singer, as a writer, as an artist.’

This stripped-down acoustic concert was part of his California residency, as he called it since he is about to play three other concerts around LA. While sitting with his guitar surrounded by a female backup singer and another guitarist, he added,  ‘We look like the Carpenters!’, but this really put me in the mood for a more electrifying show with a full band. However, his show at the Orange County Observatory and his two concerts at the legendary Troubadour are unfortunately sold out and have been for a long while, with outrageously high priced tickets showing up on reselling sites.

What makes Orville so hot? You would not even think to ask such a question when you see him, his voice is a velvety treasure with a great range which goes from a sensual deep baritone to a high falsetto and his highly cinematic dark country songs have the best Yee-Haw placements.

The most adorable moment of the show had to be when he noticed a cute little boy wearing an identical fringed mask and asked him to come on stage as his ‘official sidekick! This happened just before the deadly good ‘Take You Back’, a Western Spaghetti ride with a lonesome cowboy whistle and some killer lines like ‘I got a face of gold, I got a heart of coal/But baby, that’s my cross to bear/I won’t take you back’

Each song played like a mini-movie, with hooky melodies and haunting stories, sometimes like an outlaw country revisited through a new wave lens (‘Turn to Hate’), sometimes closer to a badlands ballad (‘Winds Change’), or even a ‘60s love song (‘Roses are Falling’) with an over-the-top spoken part that stabs you in the heart and makes you laugh at the same time.

He closed his set with his Western gothic desert errand, ‘Dead of Night’, which obviously sounded a bit different in an acoustic set, but when you name-check Carson City and Johnny Cash (with a clever play of words, ‘Johnny’s cash’) you are always certain to engage the audience, which was captivated from start to finish

He kept the mystery till the end, as he didn’t even remove his mask during the signing of his album, and everyone played along, all seduced by a music-genre-bending masked cowboy. In a music world dominated by Lil Nas X’s ‘Old Town Road’, there is certainly plenty of room for another gay Yee-Haw.

Setlist
Winds Change
Roses are Falling
Turn to Hate
Cowboys Are Frequently, Secretly (Fond of Each Other) (a Ned Sublette cover)
Queen of the Rodeo
Take you Back (The Iron Hoof Cattle Call)
Breathe (a Faith Hill cover, and ‘a very important song in the Canadian music’)
Dead of the Night 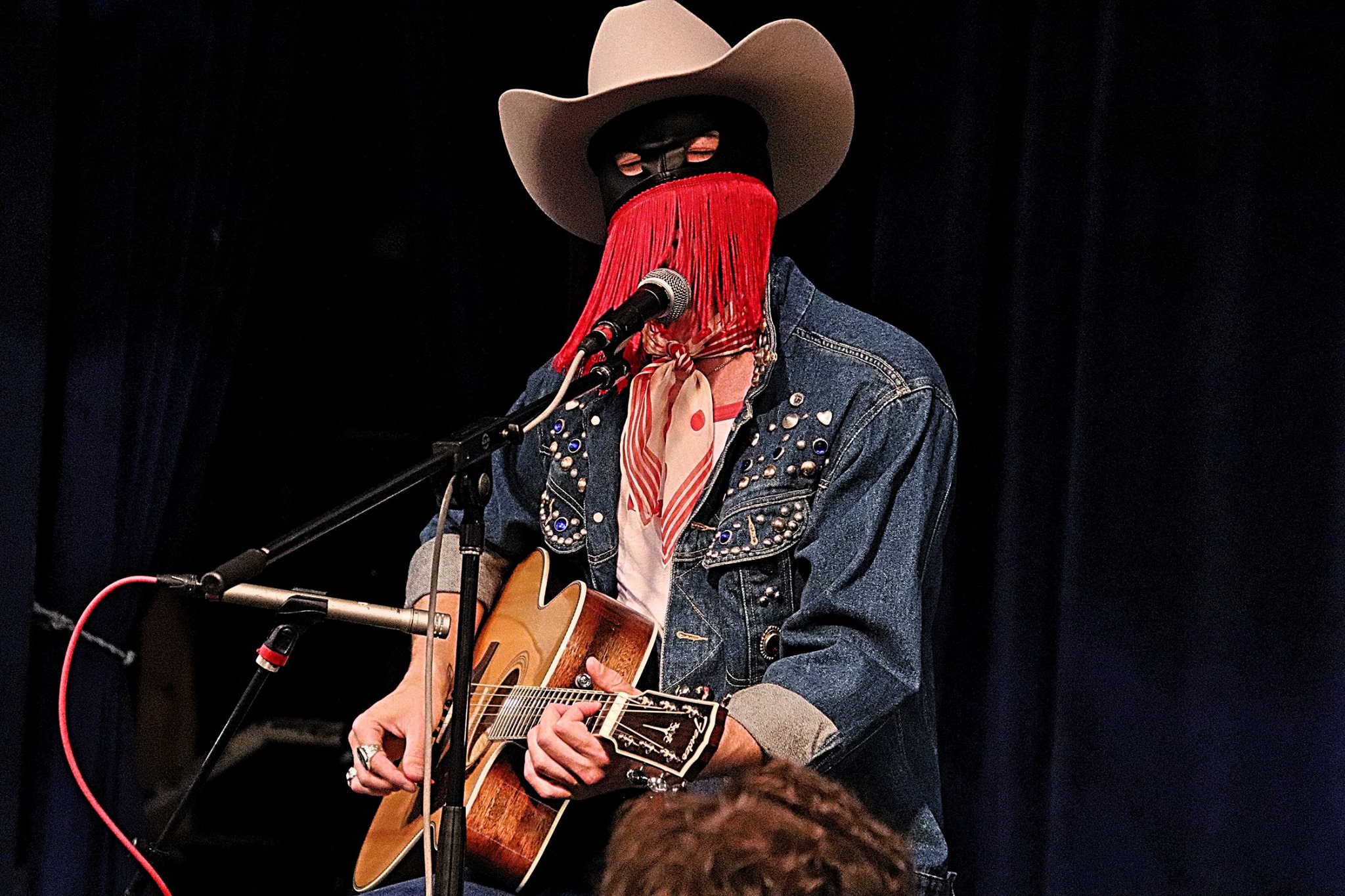 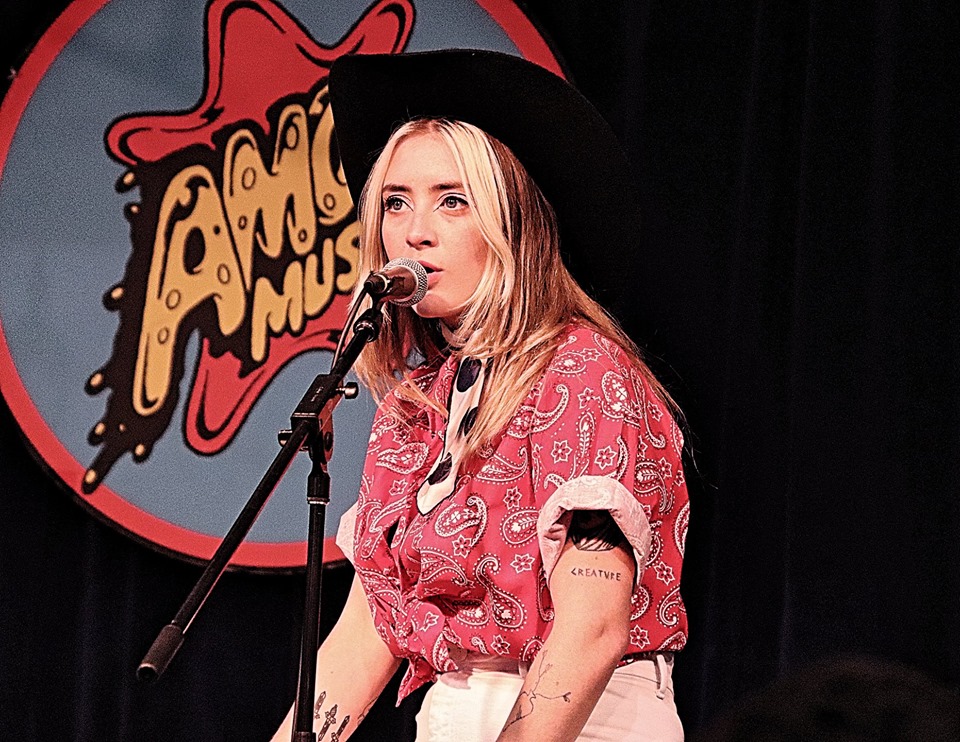 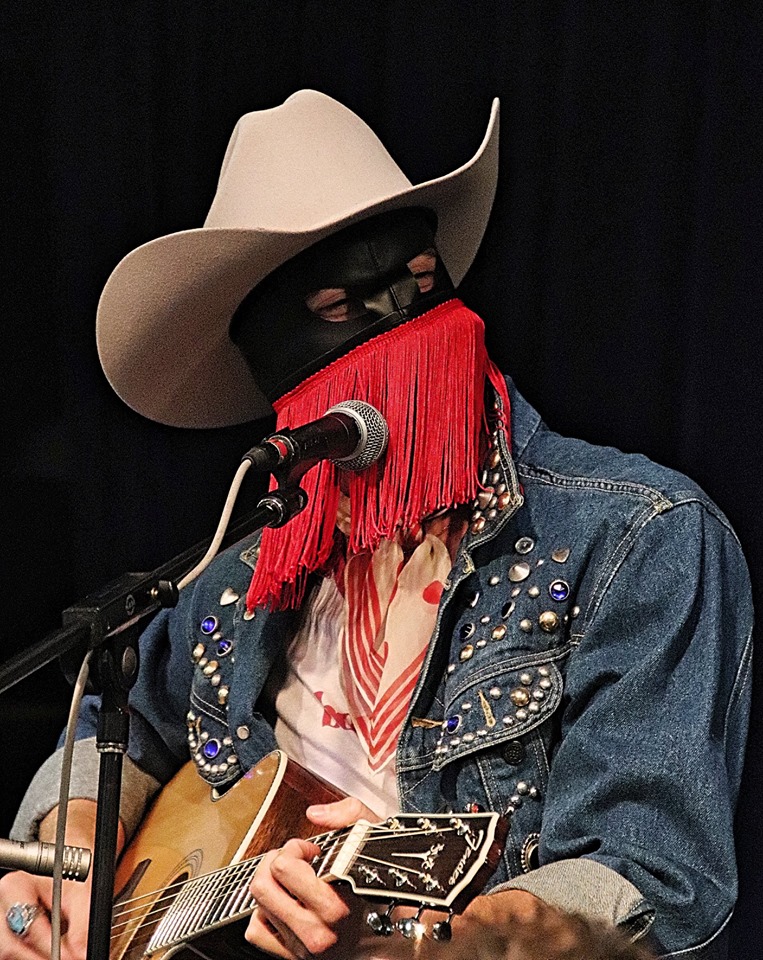 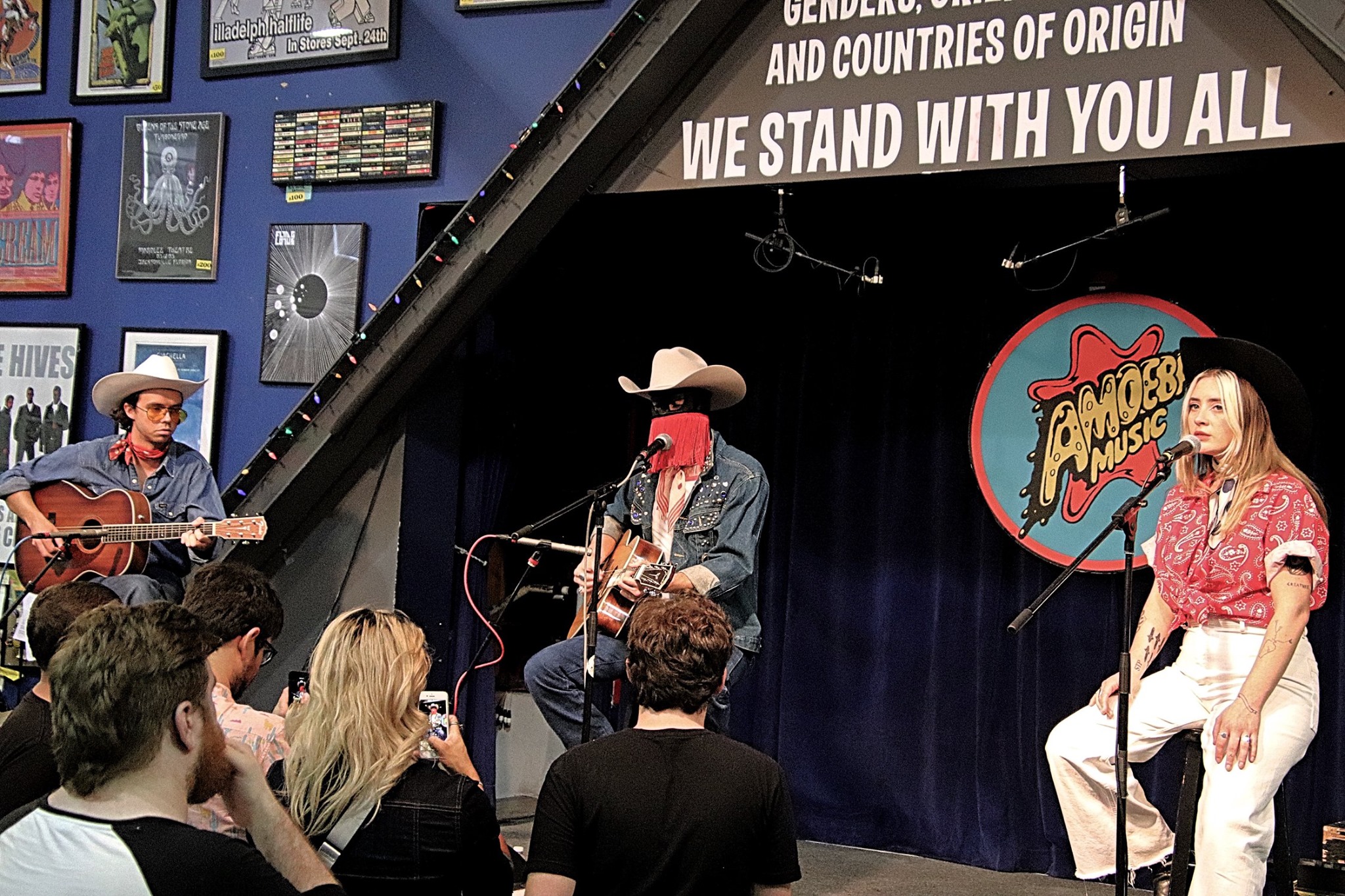 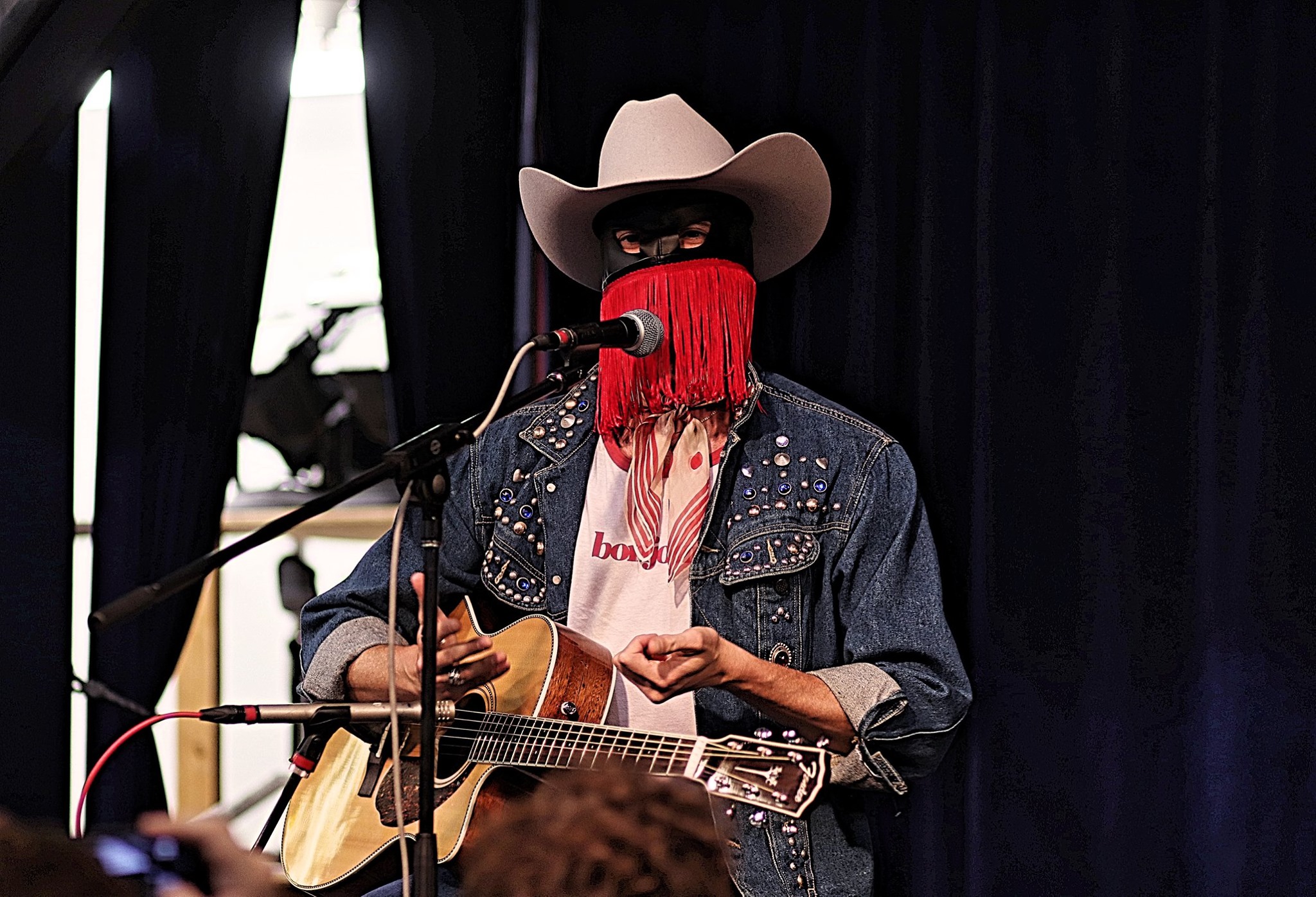 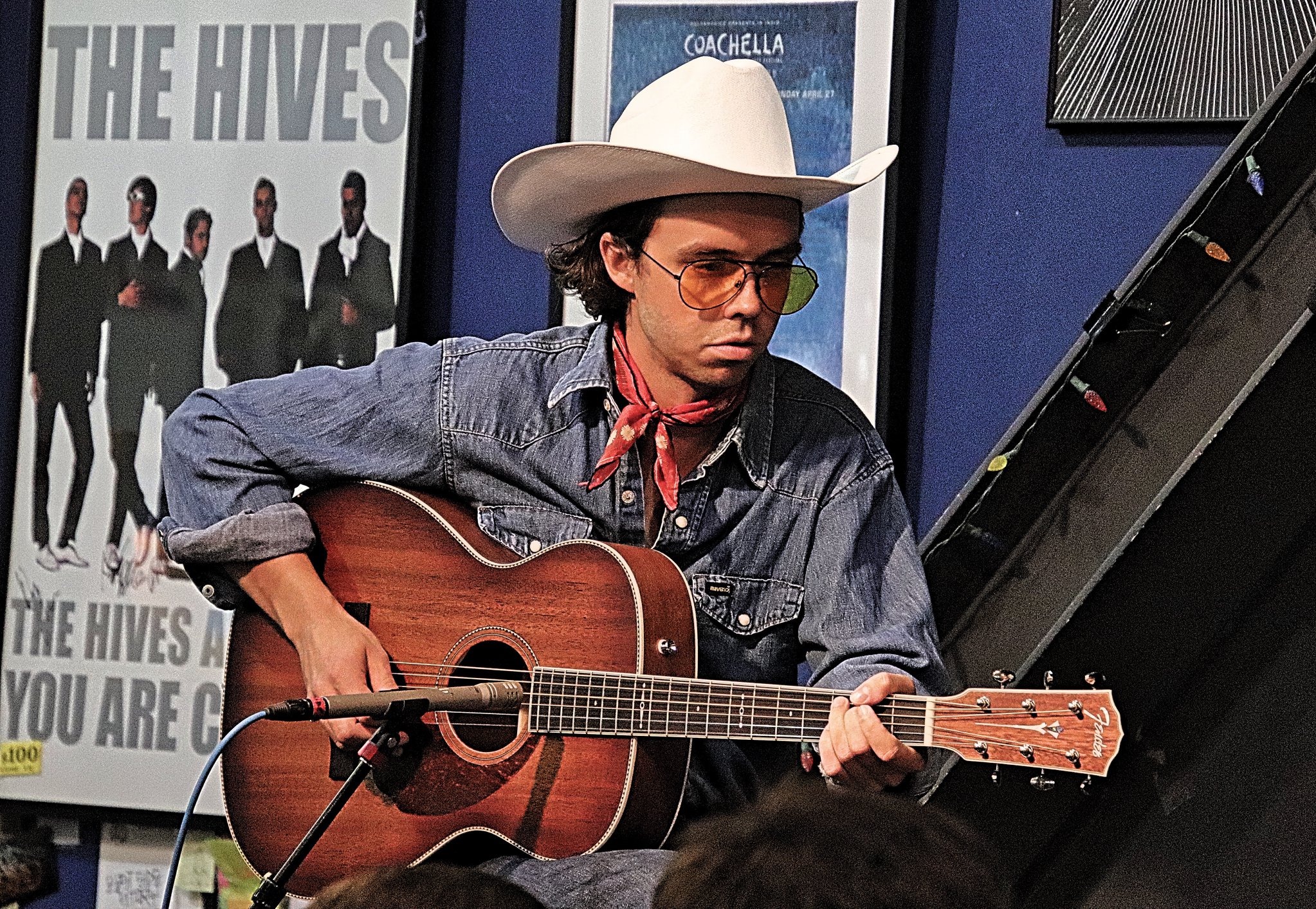 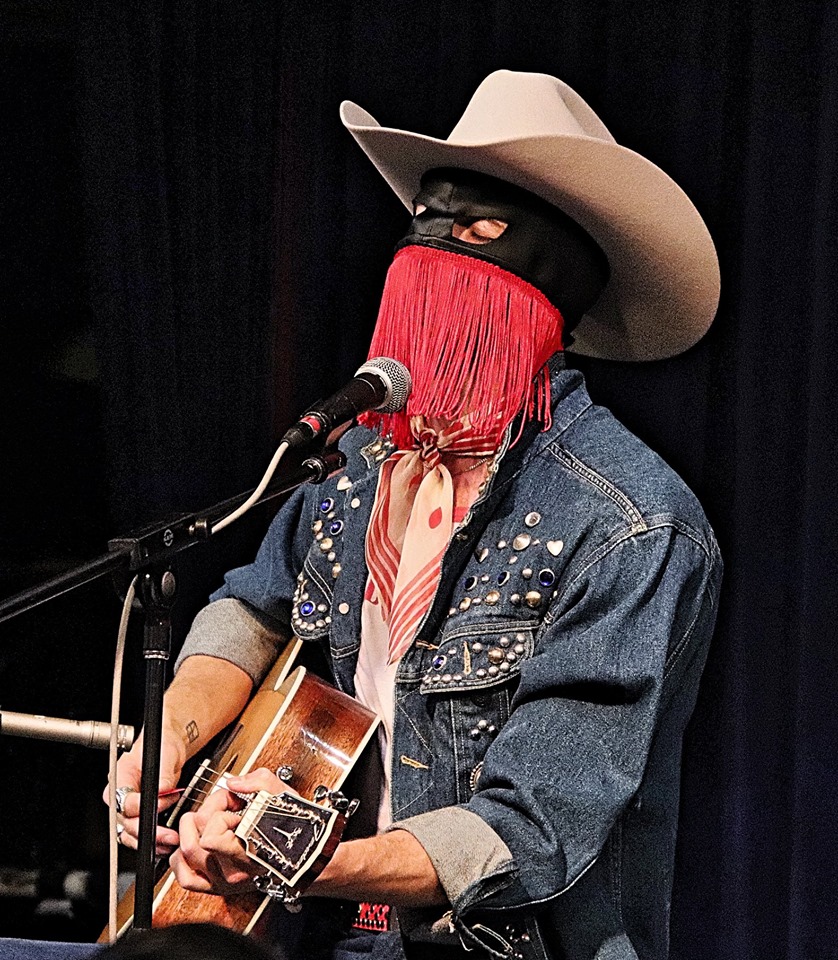 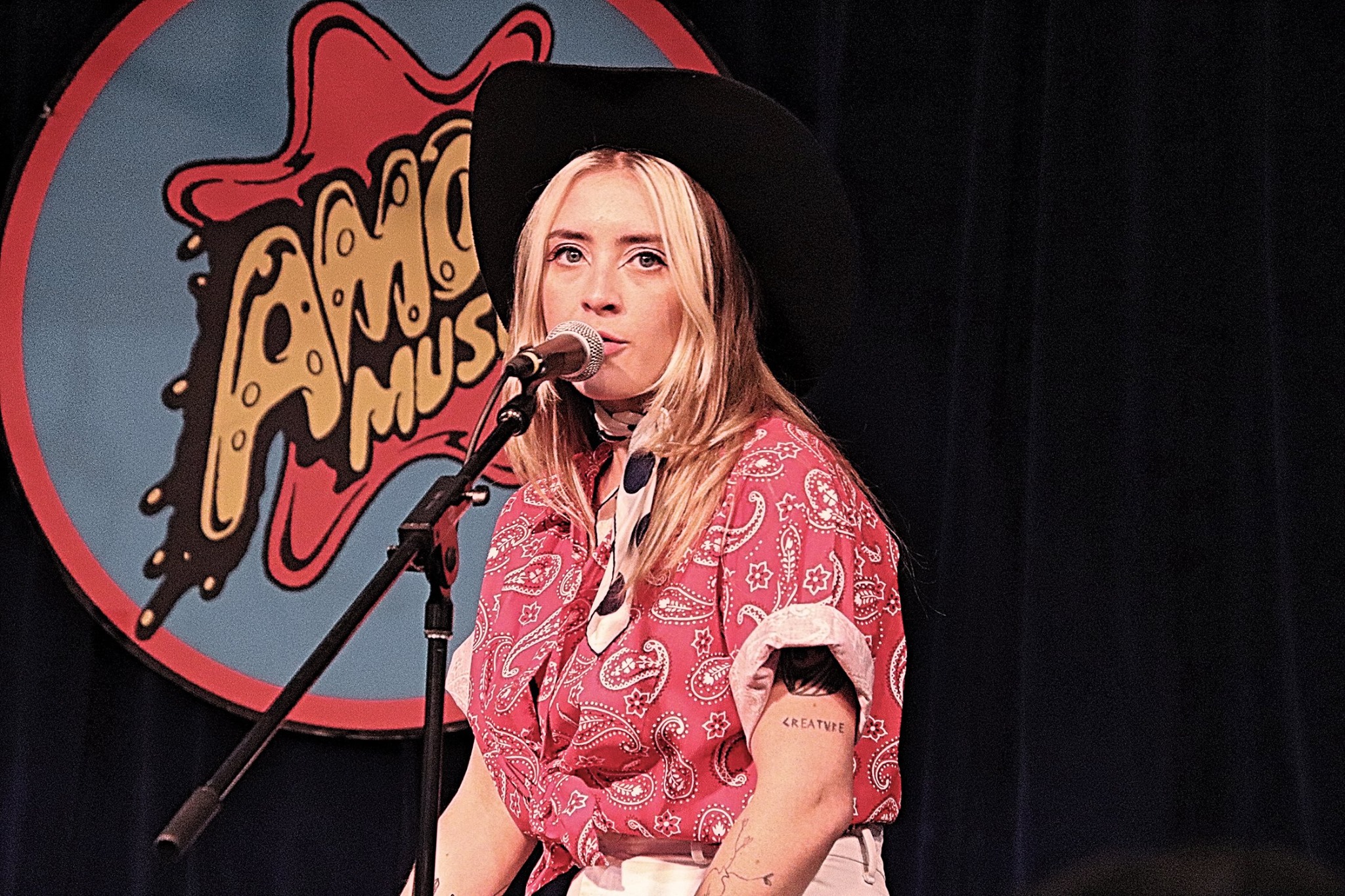 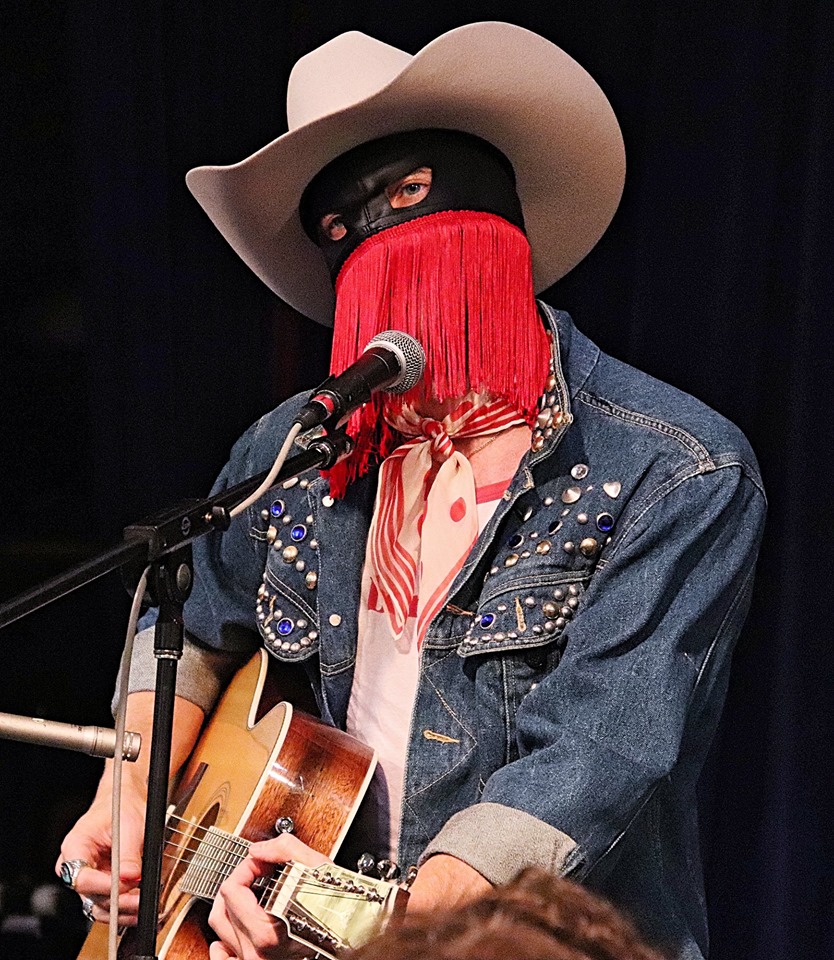 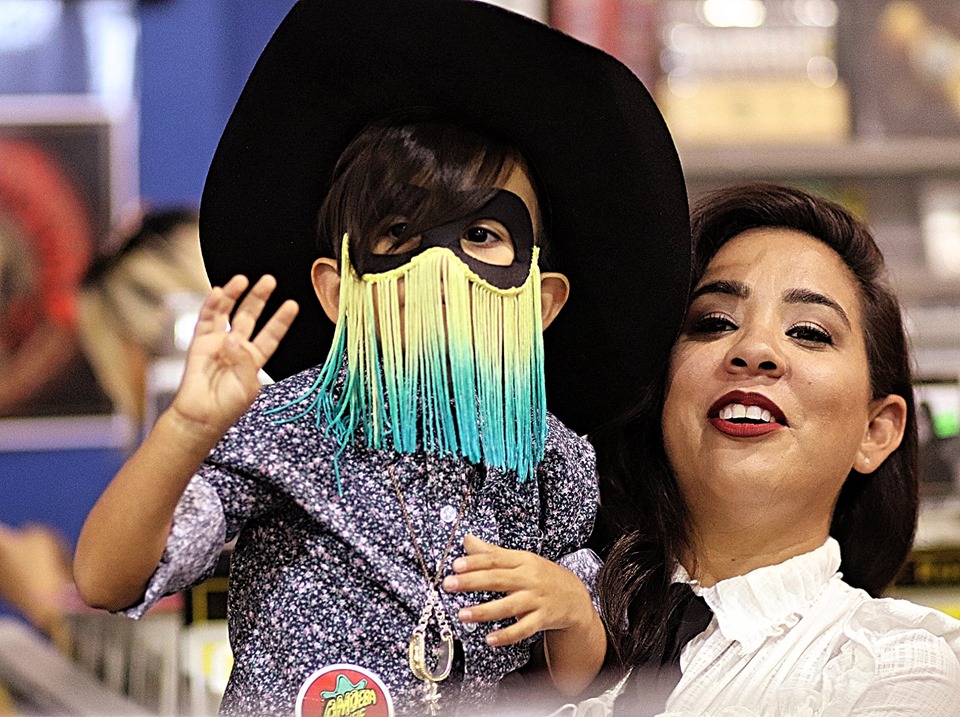 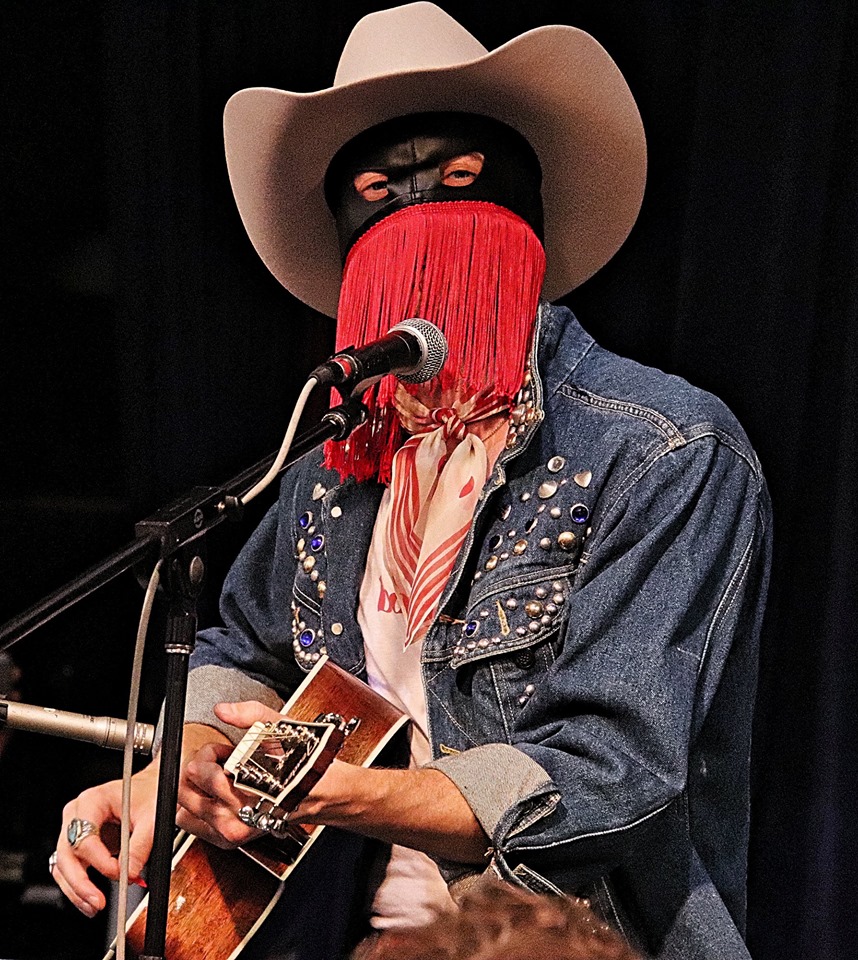 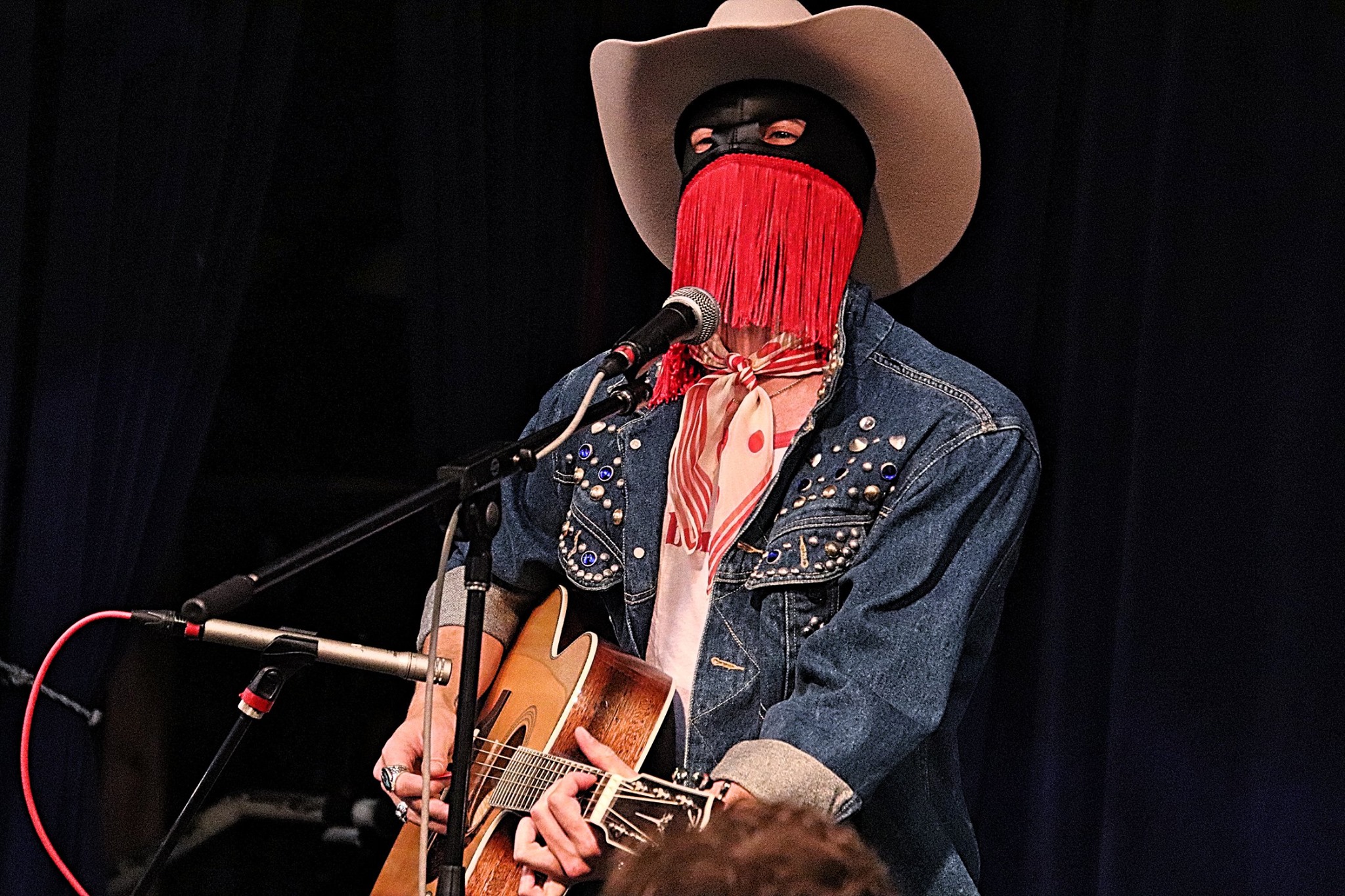