‘Once Upon A Time In Hollywood’, Quentin Tarantino’s Most Personal Movie

Alyson Camus|July 22, 2019
Movies, News, Slideshow
Once Upon A Time In Hollywood, Quentin Tarantino 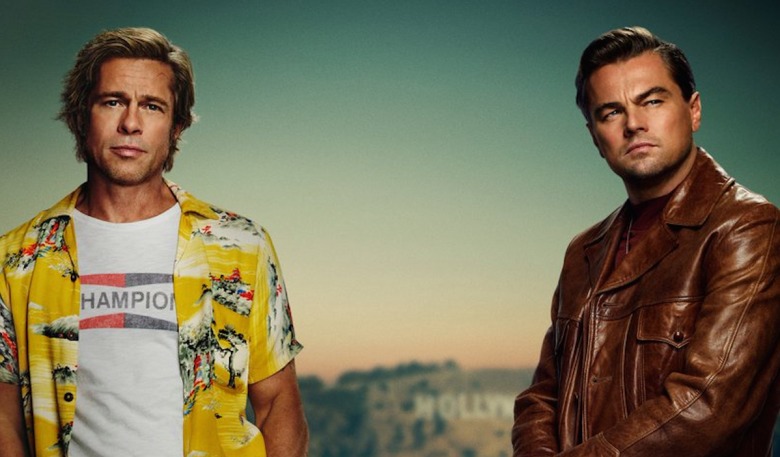 On Sunday night, Quentin Tarantino erupted in front of the huge screen of the Cinerama dome just before the projection of his latest film ‘Once Upon a Time In Hollywood’, asking us not to reveal the third act of the movie… I am gonna try, but it may be a bit difficult as the whole essence of the movie turns around what happens in this third act.

A new Tarantino is always an event in Hollywood, but this one was obviously THE event of the year since ‘Once Upon A Time In Hollywood’ was filmed all over town, and Hollywood boulevard had become the number one tourist attraction last year as everyone wanted to see glimpses of Brad Pitt, Leonardo DiCaprio and Quentin himself. The movie is certainly an homage to our town, to Tinseltown and his movie magic, but there are a lot of chances you won’t (just like me) catch all the movie/TV series references included in the film, because who can honestly compete with Quentin Tarantino’s encyclopedic knowledge about cinema?

The cast is as ambitious as the setting (Los Angeles and its surrounding) with Brad Pitt and Leonardo DiCaprio playing the best charismatic male duo since Paul Newman and Robert Redford. They are two cool guys working in the big movie industry, with nevertheless a significant difference: Di Caprio plays Rick Dalton, an alcoholic actor, made famous by a Western TV series ‘Bounty Law’, but struggling to keep his career alive, while Pitt plays Cliff Booth, Dalton’s stunt double and constant driver, a man with an impeccable tan, a perfectly fit body and a certain reputation – he may have murdered his wife and gotten away with it. As a matter of fact, he is so tough, he beats Bruce Lee himself at his own game in a hilarious scene, and if you wonder what Bruce Lee is doing here, he was a Karate Advisor for the fight scenes of the ‘The Wrecking Crew’, a 1968 film with Dean Martin and Sharon Tate. That’s a trick Tarantino uses all-movie long, mixing reality and fiction, referencing about 30 different films including his own movies, in a somewhat self-serving manner. However, his ability to graft his own legend on a pre-existing mythology is amazing.

Brad and Leonardo, the two Hollywood leading men, certainly have real chemistry together, they played their parts with a Tarantino-signature laid-back attitude, and t’s difficult to resist to Pitt’s killer smile behind his sunglasses. His Cliff Booth has such an explosive blend of hotness and coolness he could melt the audience in an air-conditioned theater, but he definitively is a one-note character. Meanwhile, DiCaprio plays a struggling Dalton with plenty of range and humor, whether he is discussing method acting with a very mature 8-year-old actress (a very funny scene) or raging inside his trailer because he has forgotten his lines.

Rick Dalton lives on Cielo Drive, next to the Polanskis’, the ultimate level on the Hollywood ladder, and despite the fact they are next-door neighbors, they have never met. ‘I am one pool party away from Roman fucking Polanski’ says Dalton when he once gets to see Roman and Sharon driving home. Dalton is a second-class actor, pre-scandal Roman is the hottest director in town and Sharon Polanski is royalty.

For about one-third of the movie, we get to know this Hollywood ecosystem with a few celebrity cameos such as Steve McQueen at the Playboy Mansion, but after shooting a western in Italy (despite Dalton’s great disdain for Spaghetti Westerns) both men return in Los Angeles with a new Italian wife for Rick. It’s August 1969 and Charles Manson and his family are about to plunge LA into terror and horror. Manson is barely seen in one unique scene but his family of young hippies has invaded the streets of Hollywood and Cliff has a close encounter with a young disciple, Pussycat. He gets to visit the Spahn ranch, still owned by George Spahn (played by Bruce Dern as Burt Reynolds died before he could play the role) a blind old man who is renting the ranch to the family in exchange of sexual favors from the Manson female followers.

I can’t say more about the plot without revealing too much but let’s just say Quentin always knows how to rewrite history (remember about Inglorious Basterds?) while keeping all the details of the decor thoroughly right – and don’t try to read the Wikipedia page as the plot summed up there is obviously not the one I have seen.

It’s a movie made by a man obsessed with cinema and film-making, there are too many short movies inside the movie to keep count, and many old movies clips are inserted into Dalton’s career… But no matter how many details Tarantino put in his film to recreate 1969 – the signs and windows on Hollywood boulevard had been through a time machine last year, since Tarantino barely uses CGI or other techniques – nothing is real of course, as fiction engulfs reality with Tarantino’s usual style: a pop-culture references galore (for cinema aficionados) and a climactic ending with cartoonish violence.

‘Once Upon A Time in Hollywood’ is a fairy tale – and it’s difficult to not think about the 1969 Sergio Leone movie, ‘Once Upon a Time in the West’,  with all this spaghetti western bashing. It’s a fairy tale happening in a parallel universe, reworking Hollywood mythology around Tarantino’s favorite and recurrent vengeful theme. Margot Robbie is a pure, enthusiastic, almost childish Sharon Tate, and Tarantino plays with the idea that her death has become the symbol of the end of the ‘60s and innocence.

You get long scenes in fast vintage cars with the soundtrack of the late ‘60s carefully picked by Tarantino from Joe Cocker to The Mamas and the Papas, Los Bravos, Paul Revere and the Raiders, Neil Diamond, Simon & Garfunkel (a reference to the 69 movie ‘The Graduate’), Bob Seger, Otis Redding, The Rolling Stones,… as the popular KHJ-AM radio station is constantly featured in the movie.

I may have wanted more scenes in the Spahn ranch as I expected more debauchery from a Tarantino movie – you only guess what happens between George and the teenager girls – but the result is a very personal film, probably Tarantino’s most personal and least violent movie to date, as there is barely any violence besides the last scene. It works as a buddy movie and a triple homage to Hollywood, movies in general and Los Angeles, with a uniform tone, a bright yellow color, and you recognize Tarantino’s style at the first scene, as he certainly appears to be a real author in this blank Marvel-Disney-dominated movie landscape. The light and happiness of cinema embodied by Sharon Tate watching herself on the large screen, contrasts with the darkness of the Manson cult, personified by the three disciples walking with knives on Cielo drive, although there is nothing too dark and the humor dominates till the end, while the last violent scene is even rewarding,

Tarantino has been caught defending Polanski, then apologizing shortly after, and if there is any controversy attached to ‘Once Upon A Time in Hollywood’ it could be the rehabilitation of the Polish director into the Hollywood pantheon.