Oldies But Goldies: An Interview With The Undertones For Creem Back In 1983 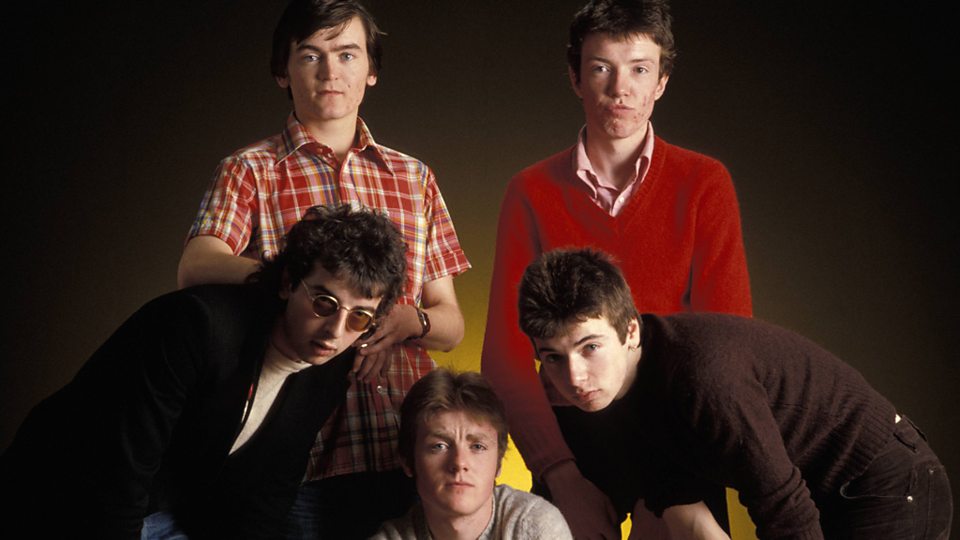 (The Undertones are playing Gramercy Theatre next Thursday. In celebration, here is an interview with Feargal and Damian I wrote for Creem back in 1983 -Iman Lababedi)

“BACK IN Derry, our earliest concerts, the situation that we found ourselves playing in, was for really small groups of friends in really small bars.” The Undertones’ lead singer Feargal Sharkey is explaining why there is so much friendliness between the Undertones and their fans, until he veers wildly off the subject, “But there was a lot of resentment from other bands, in that we were playing for nothing, and we were dandies, and fairly obnoxious.

“You see, bands at that stage, there were basically two types of bands — you had the show bands, cabaret bands, playing large selections of the Top 20 in local discos. And there were the rock bands, doing Led Zeppelin covers. Nobody wrote their own songs. We didn’t care if we were a good group or nothing, we were happy just to be up there doing John O’Neill’s songs; we were happy just to be playing.”

Obviously, Derry isn’t Manhattan, and although the year Feargal must be speaking of is 1977, the difficulties of playing were mammoth. When the Undertones first formed from the nucleus of a school band, there was only one place in town to play, the Casbah. And while the Clash were taking taxis to the dividing line between Catholic and Protestant Derry for a photo session (and not playing the city), the Undertones were giving their stress-filled audience a healthy dose of fun.

No, they didn’t sing about the political situation, not at all. Their theme song was ‘Teenage Kicks’, their music was exuberant rock — tough, fast, fun. Almost cathartic for kids with all of Britain’s financial hardships, plus, a civil war on their doorstep.

Five years, three albums later: the Undertones have been in and out of fashion. They’ve gotten married, grown up, sold out concerts in Manhattan, built a recording studio, gave the world producer Roger Bechirian, switched record companies, and Feargal and guitarist/sometime co-writer Damian O’Neill are sitting in EMI’s offices explaining themselves to me. “Some people probably thought it was good that we didn’t write about politics when we first came out,” Damian thinks aloud, “especially since the other half of it was everybody singing political songs. Like Stiff Little Fingers. And basically our songs were better.” There is a longstanding feud between the bands, after the atrocious SLF made catty comments about “cute, nothing pop bands” to the press.

Feargal: “At the end of the day, though, there probably is room for people who want to express political viewpoints in rock music.”

Damian: “Yes, but there are no views on the troubles in Ireland in our songs. We don’t have to write so directly about what we feel; our actions speak for themselves. We still live in Derry; Stiff Little Fingers moved to London the first chance they got.”

Early Undertones reminded me of the Beach Boys. Feargal laughs loud at this, “We were definitely influenced by that type of sound. That sort of very happy, disposable sound; trying to work a close harmony above a melody line…”

Feargal: “But now we’re more confident in ourselves; we’re working on our own ideas.”

The Undertones recorded a four track EP for the small indie Good Vibrations. Without the financial resources to promote it, they had the big idea of sending a copy to eclectic arbitrator of good taste, BBC Radio One DJ John Peel, where to their surprise he plugged it regularly. Suddenly the Undertones were in London, bombarded with offers from record companies and publishers. “We signed with Sire before we even had a manager,” Feargal informed me.

“For a bag of peanuts,” Damian adds, “when we did get a manager, he had to renegotiate the contract.” They released their self-titled album, a ragged, wonderful collection, reflecting their live set at the time, and a string of hit singles.

They also began an association with John Peel in a number of legendary sessions, with which they’d introduce new songs to the British public.

Then came Hypnotised — an even better LP, including the superb ‘More Songs About Chocolate And Girls’, a wry reply to the insults slung at them. By this time the Undertones were a first league pop band, so of course things started to go wrong. Their last album, The Positive Touch, was difficult, complicated, worrying, and their first real flop in Britain — partially because of the changes in fashion. But also because of a personality conflict with them and producer Roger Bechirian.

Damian: “It wasn’t just the production, we were none too pleased with Roger. He was just asking for more money and seemed to be doing less work; seemed to be taking too many nights off. We were at a studio in Holland and the owners of the studio took him out for dinner — trying to become friends so he’ll throw them some business.”

Feargal: “The main thing that bothered us was that when we recorded the first LP and batch of singles, nobody had heard of Roger, but things worked out real well. And then later, because he got a good reputation through his work with us, he started working with other people.” Roger co-produced East Side Story for Squeeze and did the balancing on Costello’s New Amsterdam EP. “He was on a fairly big ego trip during the recording of Positive Touch,” says Feargal. The Undertones were so displeased with his work that they re recorded several of the tracks.

And they went into semi-hibernation. “We wanted to play with the songs ’til we got them right.” So rather than spend the money on studio time, they made their own studio in Derry, which’ll be open to local groups at a reasonable rate; though Damian denies the philanthropic qualities, “we didn’t want the equipment to rust when we’re away.”

In Manhattan on a mini-tour to work out the new songs in a live setting, I saw their over-long, rather ordinary set at the Peppermint Lounge. But my disappointment was clouded by memories of superior sets. They were very good, not great.

The Undertones haven’t remained the same with the passing of the years, but they’ve remained true to the spirit of the pop. They’ve still got the positive touch, and they won’t lose it.