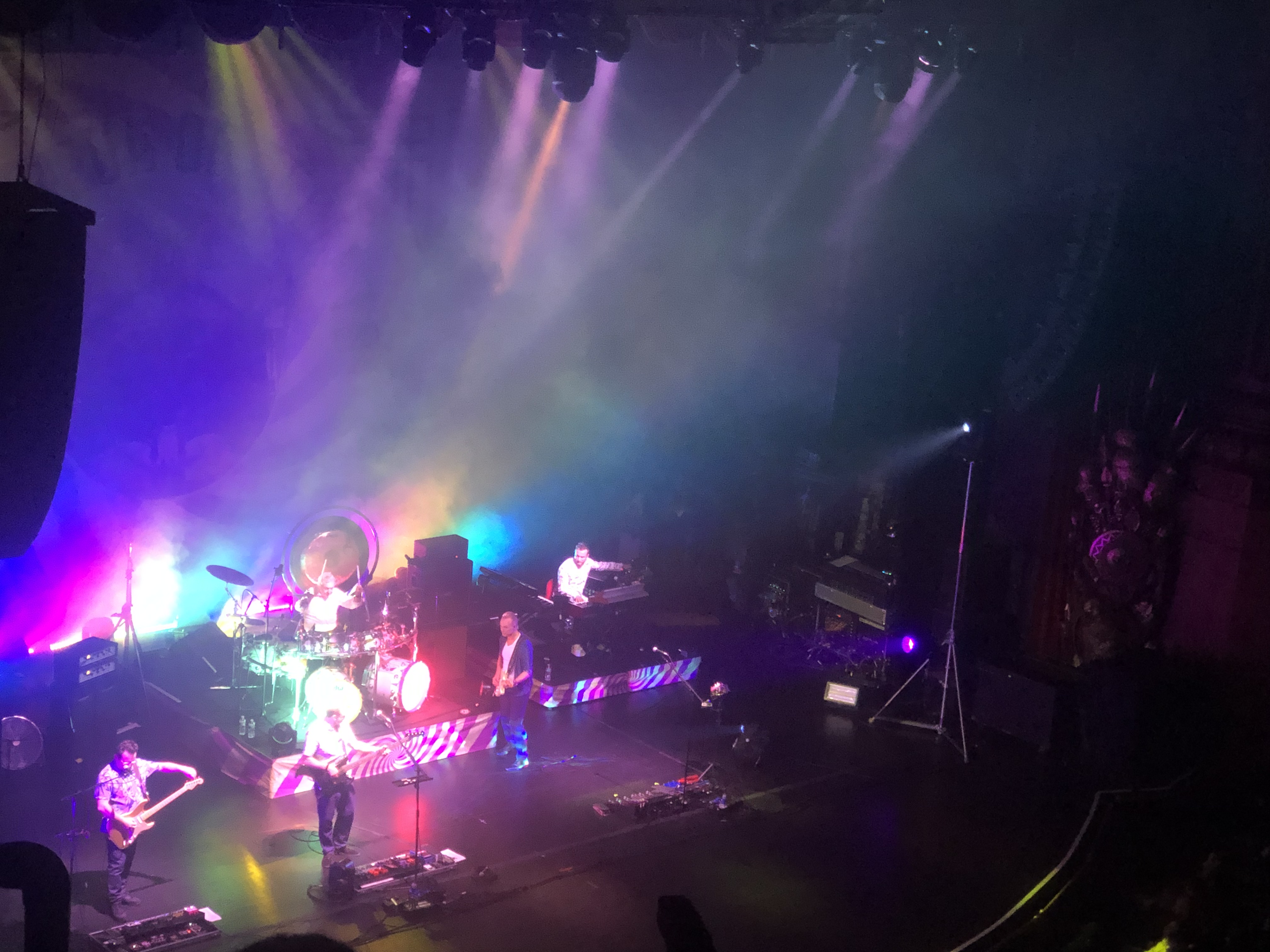 Pink Floyd’s  drummer Nick Mason is nearing the end of the US leg of his “Saucerful Of Secrets” tour which, not unlike Tom Stoppard’s “Rock ‘N’ Roll,” functions as a tribute to one of the great, lost genius’s of rock, Syd Barrett. Concentrating, as Nick does, on  Pink Floyd 1967 – 1972 (aka pre-Dark Side Of The Moon), he performs the songs that working class white boys used to expand their consciousness as much in as in suburbs of London, as in Swinging London itself. Although Syd was responsible for only Pink Floyd’s debut album and half of the follow up, as well as some singles, he was all over Friday night’s Performance: the first three songs are at least partially Syd’s, “Vegetable Man” and their biggest 60s hit “See Emily Play,”  and “Arnold Layne” were all Syd, and if you add “Bike” that’s a quarter of the set for the two years the troubled Barrett spent with the band.

Thess songs, indeed the entire set, are all from albums you seldom hear Roger Water or David Gilmour play, and the somewhat self-effacing Nick is less MC and more drummer driving behind the excellent band he has assembled. Gary Kemp -the former Spandau Ballet, is lead guitarist, and Guy Pratt (who was once married to former Pink Floyd keyboardist Richard Wright’s daughter) shared MCing responsibility. On Thursday night ,Roger Waters showed up to bang the gong for “Set the Controls for the Heart of the Sun,” sadly we didn’t get him Friday but I think we can all agree that yes, in fact, Roger got it right and Nick’s band played this five years of psychedelic, workingman highish, acid soaked, good and bad whimsical.  fast folk forward pop stuff better than the original band managed.

Opening with the instrumental “Interstellar Drive,” and neither overstating, over stage designing, over lighting, or misconstruing the material strengths, the band only flubbed it once. Gary and Guy shared lead vocals as the five piece band travelled through sounds that echo like it was the 1960s, but also not like the 1960s you remember: if the urge is to resurrect The Piper At The Edge Of Dawn and A Saucerful Of Secrets, it is also to rediscover the underlying songs beneath Roger, David, and Syd’s weirdness. Both “Atomic Heart Mother” and “If” are revelatory 60s folk rock that spins off and off, all the fuzzed out, sound reveals Syd invented are still there, but less controversial, less jarring, and less self-indulgent. It is a clear exponent of Pink Floyd’s essential English lower middle class vibe, take Waters: his father was a coal miner and a communist (among other things) and you can hear the reverberations as far as you can imagine in Pink Floyd. Syd (not his real name by the way, how much more working class than Sid can you get? Sid James, anyone? Sid Vicious) was the most English sounding singer till Johnny Rotten showed up. Money changes everything, but not in 1968, Nick returns to retain something the post success, the Dark Side-Wall PF,  lost.

Nick doesn’t offer a Roger style extravaganza, or Gilmore’s astonishing sound triage, what he does is close down the band to straight up, five piece, rock dimensions, and plays the songs very, very well. Given Pink Floyd’s penchant for it, there is zero self-indulgence and less pretentiousness, it is as clearly a straight up rock concert living and dying on the performances and songs are both are just great. Nick has done himself, his former band, and we, the fans, a great service.