My Short Conversation With Robin Peringer 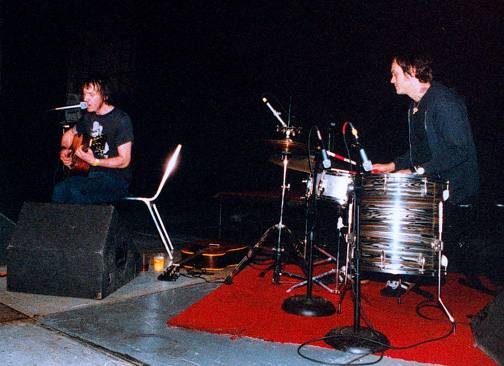 Robin Peringer with Elliott Smith in 2003

Robin Peringer used to play drums with Elliott Smith during his last concerts, the two seemed inseparable in 2003, and the musician seemed to have been very present during Elliott’s final moments. You can spot him in Gil Reyes’ documentary ‘Searching for Elliott Smith’ and he was interviewed by Liam Gowing for his Spin article ‘Mr. Misery’ but strangely, seems to be absent from W.T. Schultz’s ‘Torment Saint’.

Robin Peringer has always intrigued me for several reasons, but mostly for a declaration in Filter magazine in 2008 (the issue is not online and can be just ordered here). At the time, Robin was part of Band of Horses and was interviewed as a member of the band. The journalist didn’t resist asking him about Elliott: ‘I ask Robin about his friendship with Elliott Smith, and he candidly obliges. The two were close during the mid-’90s but drifted apart as Elliott began to distance himself with drugs. They rekindled their relationship just before his death, and Robin tells the harrowing story of cleaning up the blood throughout Elliott’s house after the suicide. ‘I get really upset when people say dumb, ignorant shit about him being murdered,’ he says. ‘It’s just ignorant!’ It’s the loudest I’ve heard him speak all week.’

Robin was also seen with Jennifer Chiba at the memorial wall, very shortly after Elliott’s death, probably a day or two after his passing. Fans were mourning and leaving candles, notes, and flowers in front of the wall, and Chiba and Peringer showed up around 11 pm to talk to fans. A fan reported that Robin said Elliott was ‘practicing every day for 7 hours a day, preparing for the Iggy and the Stooges, ATP show’ (Elliott was part of the line up of the All Tomorrow Parties music festival which was supposed to happen on November 8th). Robin also said that Elliott was ‘very happy, always laughing, very upbeat, cracking jokes all of the time’, and that ‘there was no sign, what-so-ever of anything like this happening’. He even added that ‘two days before it happened, they were sitting on Elliott’s porch talking about growing a garden, making plans for the records, turns out they were going to release one and then another one instead of a double record and then they were going to continue releasing two records a year like the Beatles did.’… These are the exact words posted on Elliott Smith’s message board by a fan, in October 2003, just a few days after his death.

I had never talked to Robin, but, after many failed attempts and undelivered emailed, I got the occasion to exchange a few emails with him. I contacted him and asked him if he could answer to a few questions, as a frequent companion of Elliott during his last year. My hopes were not very high, but this is what I got:

‘I will answer one or two questions,’ he wrote, ‘I sorta learned to not talk too much about Elliott as everyone has their minds made up on him and his end. But we can try.’

It was a good start and I immediately asked him when was the last time he saw Elliott and how he felt about his state of mind, making him aware I had read the optimistic statement he had made at the memorial wall that night.

‘I’m not sure of my last encounter’, replied Robin, ‘He was on some days and off others. The talk of moving was more in hopes of staying clean away from LA. He had a studio in North Hollywood but literally, it could have been moved anywhere. I’ll never know if he was truly off drugs, I found drugs in his studio but had no idea when they entered, they could have been forgotten or purchased that day. He was being given prescription drugs by his therapist, I remember him taking something like 25 Adderalls when we played New York, I don’t know if he slept at all on that trip. I can say he seemed good while we were rehearsing for ATP, but there were both good and bad days’.

I immediately jumped on the drugs subject as I was certain about one thing, whether Elliott was truly off drugs or not, he didn’t have any illegal drugs in his system the day he died and had only (sub) therapeutical doses of prescribed meds. So there was no abuse of drugs of any kind the day he died. I mentioned the results of the autopsy report (non-conclusive), the extreme rarity of suicide by stabbing, the case left open by the police, and the cloud of suspicion still hanging over Jennifer Chiba. I wanted to get more from Robin, but that was about everything I would get, ‘We’re done’, he replied. And I was not surprised based on this old Filter interview.

Several things come to mind after this exchange, first, regarding the 25 Adderall pills he claims Elliott took when they played in New York. This story may well be true, but let’s not forget this is the same guy who declared to Spin magazine that Elliott had cut himself in a very serious manner, just a month before he died: ‘He had three really tremendous knife wounds on his left arm. They were deep like he had to go across a couple of times or have the sharpest, biggest knife to do it.’ Such wounds never showed up in the autopsy report, and it is difficult to think that ‘3 tremendous and deep wounds’ could have perfectly healed in just a month. So I take everything he says with a grain of salt…

Then, there is his very optimistic declaration at the wall, just a day after Elliott’s death, the upbeat mood, the garden, and the recording plan à la Beatles… why did he say this when he seemed to be in a backpedaling mode just a few months later (when he spoke to Liam Gowing for Spin magazine)? Almost 16 years later, Robin says that Elliott had good and bad days, and was more or less still addicted to drugs.

But the most telling part is his last reaction, cutting the conversation short when we get to the core of the subject. I don’t know what is his relationship with Chiba these days, but why wouldn’t he help clear up her name if he is convinced of her innocence? Why not trying to present me some compelling facts and shut down the suspicious reactions you can read everywhere? His angry reaction is that of a man with no argument to bring on the table. He got mad at the journalist 8 years ago, and of course, he got mad at me too for asking the same question… I may have gone too fast, I may have asked a too direct question too soon, but since he told me at the beginning he would answer just one or two questions, I didn’t have the luxury to beat around the bush for too long.