In conjunction with RSD Black Friday, RTM—the worldwide leader in reel-to-reel tape manufacturing—and ThinkIndie Distribution are reissuing a series of critically acclaimed albums on cassette for the first time ever. Alanis Morissette’s Such Pretty Forks in the Road and Giovannie and the Hired Guns’ Bad Habits are making their debut on cassette, along with My Morning Jacket’s much beloved Holiday offering, My Morning Jacket Does Xmas Fiasco Style. The releases are available at participating indie record stores beginning this Friday, November 25; see recordstoreday.com for additional info on RSD Black Friday titles and stores. 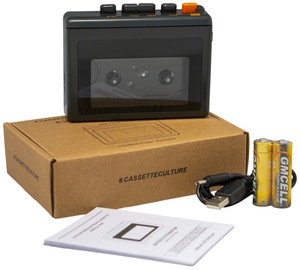 In addition to the album releases, RTM is launching their new B-1000EW Portable Cassette Player as part of RSD Black Friday. With electronics by RTM, the new player retains the built-in microphone and external microphone recording of their previous B-1000 model, along with an expanded window, USB power adapter and more. The Vinyl Factory recently hailed the B-1000 as one of the best portable cassette players on the market, noting that it is “a modern-made cassette player that allows you to focus on the music.”

RTM’s Jean-Luc Renou and ThinkIndie’s Scott Register discussed the reissues, as well as plans for future series, with both Rolling Stone and Billboard. Additionally, RTM CMO Neal Birnie recently discussed the newfound popularity of cassettes with No Depression.

With the rise in demand for analog music cassettes, RTM’s  new compact analog cassette tape is the first newly produced cassette on the market to offer high quality audio in analog format, ideal for listening, recording and archiving. The cassette tape is manufactured using legendary chemical formulas from BASF at the RTM  facility in Normandy, France. It can be played on any standard compact cassette player, generally available at high-end audio stores and big-box stores nationwide.