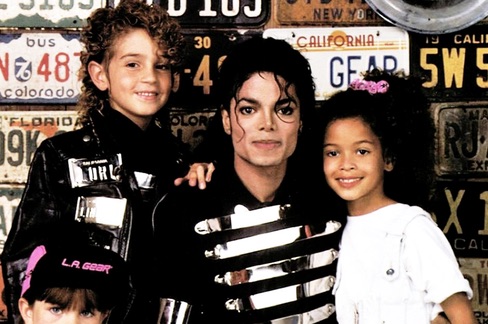 Wade, Michael Jackson and Brandi (the only pic I could find of Wade and Brandi together)

Michael Jackson’s niece, Brandi Jackson, has been quite active on social media to defend her famous uncle and has claimed the two men at the center of Dan Reed’s documentary ‘Leaving Neverland’ are simply liars. She recently made public that she dated Wade Robson, and used this argument to prove he was a liar.

According to what she said, she met Wade when they were 9 or 10 while working on a photo shoot and a Michael Jackson video, and when they got a bit older, Michael Jackson himself set them up. She claimed to have been in a relationship with Wade for 7 years so until approximately 2000-2001 — Brandi would have been around 18-19 at the time.

Brandi has been at the center of her fans’ attention since she posted on her Instagram:

‘Wade and I were together for over 7 years, but I bet that isn’t in his “documentary” because it would ruin his timeline. And did I mention, it was my uncle #MichaelJackson, who set us up? Wade is not a victim, #WadeRobsonIsaLiar’

I was surprised by this statement because I didn’t see how it was ruining the timeline. Didn’t Wade say he was molested at 7? He said he had his last sleepover when he was 14, but by then, he had already been replaced by other kids, as Jordan Chandler and Macaulay Culkin were already around since 1991-2. Michael Jackson had been transitioning to other victims 2 or 3 years after the peak of his ‘relationship’ with Wade, so the sexual encounters he may have had with Wade when he was 12 and older were much rarer.

Dan Reed answered to this point during an interview: ‘They had occasional meetings where they follow the old pattern and end up having sex but it is conceivable that Jackson had other relationships and Wade could have as well. The fact that he was a boyfriend and girlfriend with Brandi at the age of 12 or 13 doesn’t mean that he wasn’t seeing Jackson, too. I don’t really follow that logic.’

Brandi’s relationship with Wade from 12-13 (and this looks awfully young to call this a real relationship anyway) to 18-19 barely overlaps (if it even does) Wade’s ‘relationship’ with Jackson.

I confronted Brandi on her own Instagram page, asking ‘How does it ruin the timeline? Wade was molested by Michael Jackson when he was 7 till 14. Did you date him at 7? 8?’

After being attacked and lectured by her protective fans for several hours (and if I appear a bit irritated in the conversation it’s because many of her fans had already answered in a very unpleasant manner), Brandi surprisingly took part in the conversation, first debating other points that had been mentioned among the arguments. For example, she wrote that ‘the boy was WRONG with the description of Michael’s penis’ — and why can’t she name him by his real name, Jordan Chandler, when she pretends to have done the research! I mention this to show how weak their arguments can be because you can download Chandler’s deposition, the official paper of Superior Court of California County of Santa Barbara (see the link below) and see by yourself this is not true. Chandler’s testimony was recognized as accurate by the authorities, and this Snopes page will shut up any fan telling you that Jordan later confessed that he lied about being sexually molested by Jackson.

But I reoriented Brandi to my original question, and after saying that she doesn’t ‘interfere with fools’, Brandi continued to interact with me: ‘Listen to the link in my bio, I’m not here to do an interview with YOU. That’s not an answer I can elaborate on in text… I’ve already answered it, to multiple people’, she wrote.

She was referring to an interview she did with John Ziegler for Mediaite, although the interview doesn’t reveal much more than we already know and certainly doesn’t answer my question. On a side note, I checked who this John Ziegler is, and he happened to be a conservative radio host and the author of a ‘mini-documentary” on the Penn State child sex abuse scandal, which criticized media accounts that Joe Paterno was aware of Jerry Sandusky’s abuse of children. Ziegler even interviewed Sandusky from prison and proclaimed that he was a ‘chaste pedophile’ who did not commit any sexual acts with his victims. So it would be too easy to say that Ziegler is into the business of defending pedophiles, but Ziegler declares himself an expert, these are facts!

And since I still didn’t have an answer to my question, I replied ‘But it’s fair to recognize you have no idea of what happened when Wade was 7 or 8 alone with Michael J. And that was my point, it doesn’t ruin the timeline.’

To what she answered, to my greatest surprise: ‘ok, cool’ with a thumb up… and it may have been an irritated and ironic thumb up, but she could not contradict this point, because she effectively was not in the bedroom with Jackson and Wade when he was 7, 8 or even 9. Of course, she continued and tried to rebut her ‘approval’ by adding: ‘and what’s fair to recognize is that these two liars waited until Michael died and they were in financial ruin to all of a sudden realize they were molested. Then made a film referencing lies and brought not one piece of fact or evidence to this film that you are basing your belief on’.

This is the obligatory comment coming from a person in denial, but I got an answer, she okayed my affirmation admitting she had no idea about what happened behind closed doors when Wade and she were just 7 or 8. Why this relationship should have been mentioned in the documentary as Wade’s teen years are barely covered? Being childhood sweethearts at the age of 12, 13 has zero connection with Wade being molested at 7, as the intense relationship with Jackson was mostly between the age of 7 to 9, Wade didn’t really see Michael much after that. In the documentary, it is even mentioned that Wade wanted to go on tour with Jackson for the Dangerous tour, but Jackson would not take him because he already had another boy.

Brandi also stated that their relationship was always very age appropriate and that they waited to have sex until she turned 18, so if I count correctly in 2000. Since she said their relationship ended in 2000-2001, they didn’t have a very long sexual relationship, and she certainly was not intimate when they were younger. She pretends Wade has always acted ‘normal’ and she has never seen any sign of him having been abused, but this is where she refuses to see the evidence: She claims that Wade had been sleeping around before the two started to have a sexual relationship at 18 and that Wade even cheated on her with Britney Spears among many other women. That’s actual would fit with the behavior of someone who is emotionally unstable, someone who has been molested. Any expert will tell you that people who have been molested are often promiscuous, However, this is the sign that Brandi refuses to see, as the rest of her discourse reveals little knowledge about sexual abuse, the long and lasting relationship between the abused ad the abuser, and its damaging effects.

On another side note, I read that Justin Timberlake’s song ‘Cry Me a River’ is about Britney Spears cheating on him with Wade. Since the song was released in 2002, the same year that Justin and Britney split up, there is another slight problem. If Brandi was with Wade till 2000-1, the affair should have happened in 2001 at the latest, so there may be something wrong with HER timeline this time or did they wait for an entire year to split?

I am sort of grateful she answered me, as she was not able to justify that her teenage relationship with Wade was ruining the timeline represented in Leaving Neverland. It’s just sad to see the pattern of denial continuing with such strength.

My exchange with Brandi Jackson: 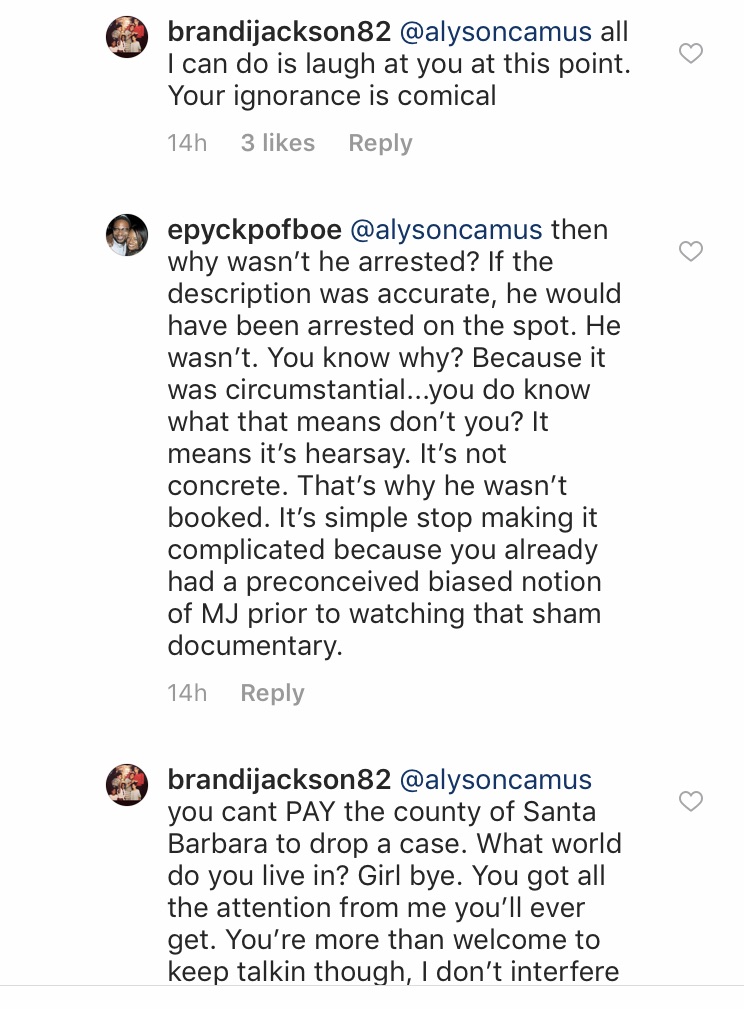 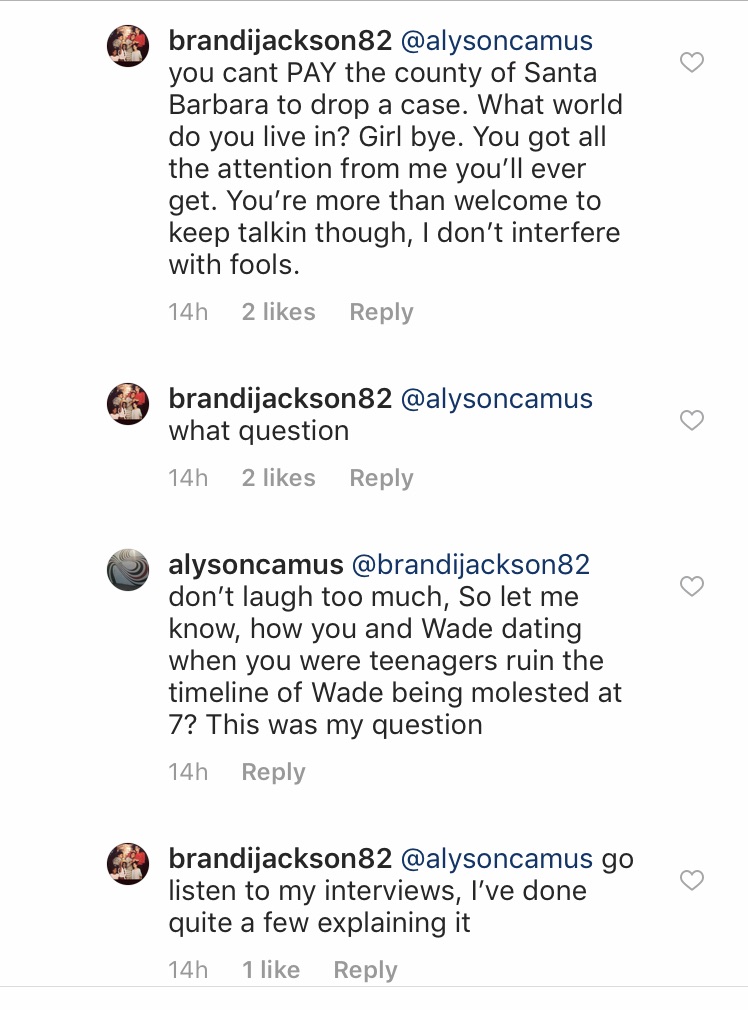 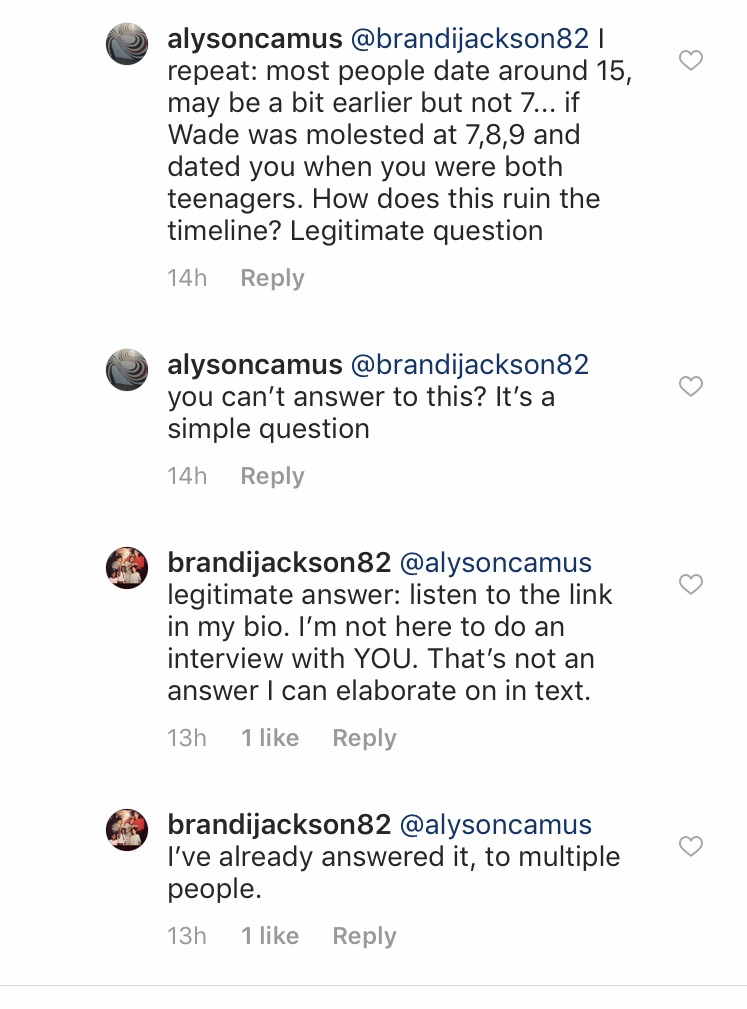 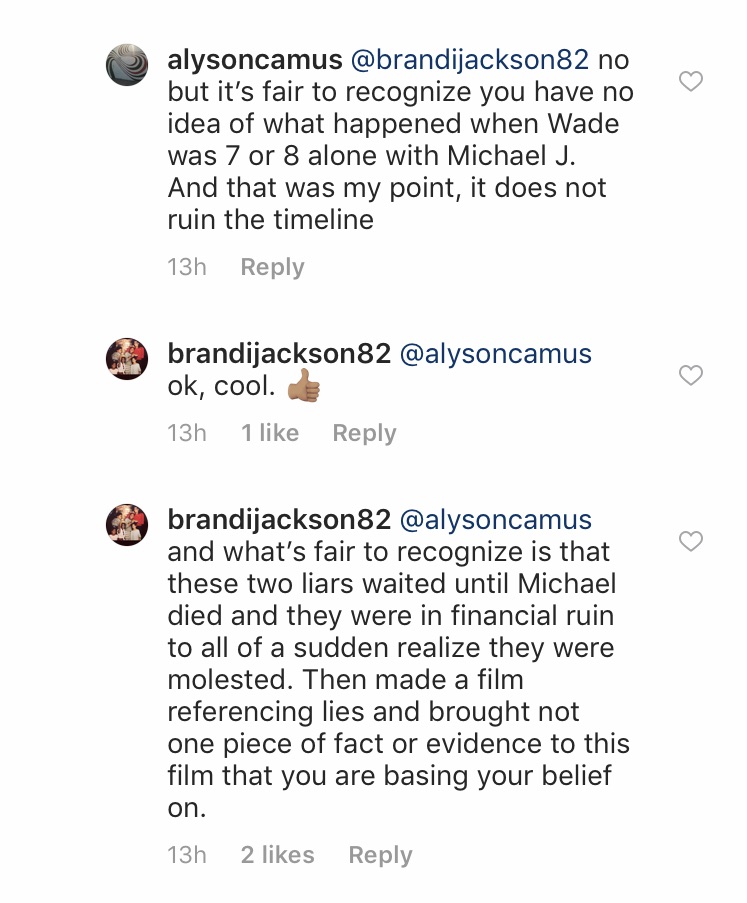 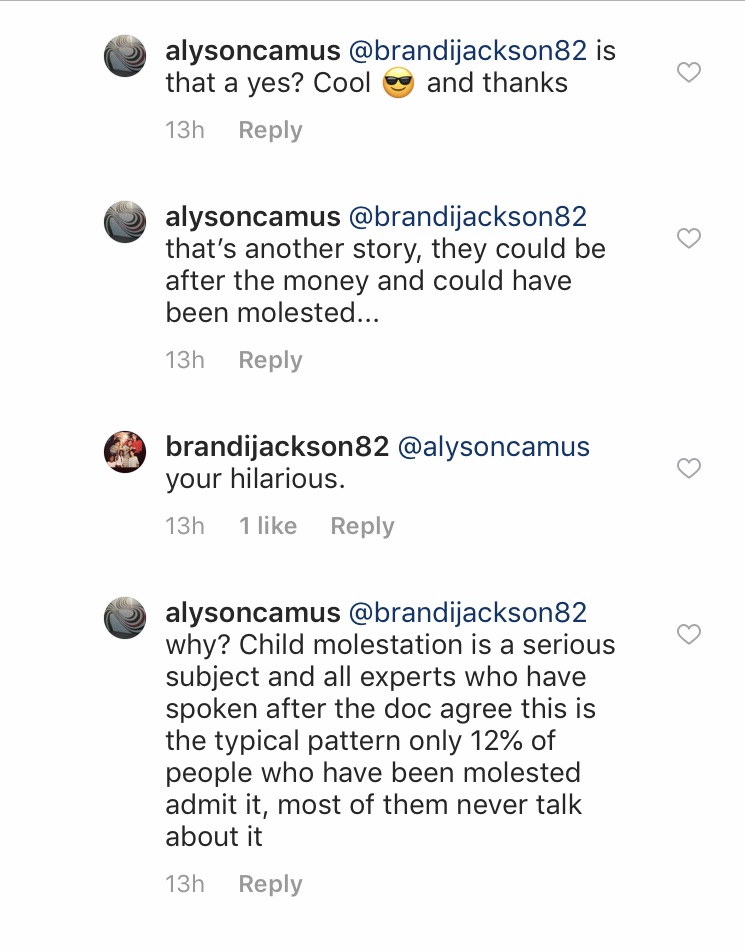