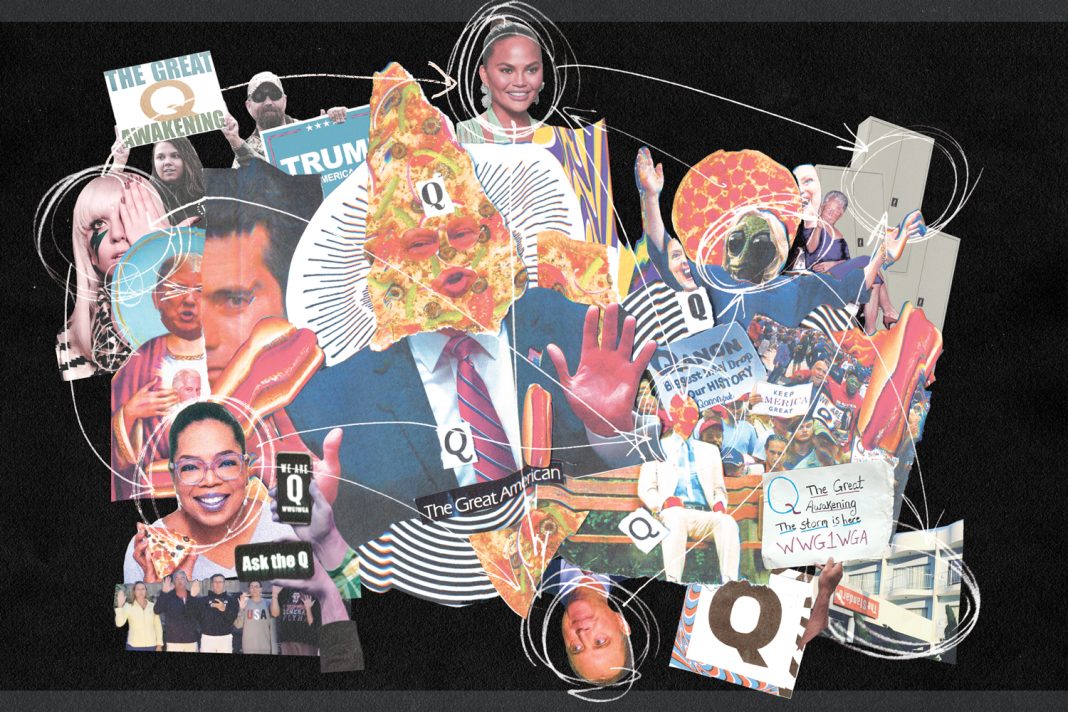 It’s one thing to call the current US president ‘the strongest leader that we’ve got’ as former Kiss guitarist Ace Frehley just did during The Cassius Morris Show, but it’s another thing to adhere to the worst conspiracy theories that are currently floating around. Frehley’s support for Donald Trump could even be pale in comparison to certain musicians’ beliefs.

Some of the worst conspiracy theories, or rather today’s worst conspiracy theories, are certainly spread by QAnon, a growing cult that is dangerously infiltrating US society. The QAnon people believe that a secret league is taking over the world, mostly pedophiles with high positions in government, finance, news media, and entertainment, and they think that this secret Satan-worshiping cabal kidnaps children, and even eat them. According to QAnon, this ring, that had its prevalence during the Clinton and Obama administrations – remember pizzagate? – promotes abortion, transgender rights, homosexuality, and wants to defund the police, while only Donald Trump will be able to rescue America from this Satanic domination. The pandemic has only reinforced this insanity and probably made this nonsense more attractive for some. Covid-19 conspiracies have merged with QAnon conspiracies, and the insane theory that the coronavirus outbreak is a plot by former Microsoft CEO Bill Gates has been spread by the QAnon movement and the anti-vax community. Everything meets in one big collective paranoia.

Since Trump has welcomed QAnon supporters to his rallies and has even retweeted many QAnon accounts on the sole basis that ‘these people like me so they are good people,’ we can safely say that supporting Trump is supporting QAnon and its wild and dangerous conspiracies. But which musician is crazy enough to buy this lunacy? Can we use musicians and QAnon in the same sentence?

The large majority of musicians are supporters of the Democratic party, and if the Kid Rock and Ace Frehley of the world are usually an exception, we are not living ordinary times. In 2010, Moe Tucker, the former Velvet Underground’s drummer, showed up at a Tea Party rally declaring her hatred for socialism and any government intervention, ‘I’m furious about the way we’re being led toward socialism,’ she declared. Since that time, things have gotten much worse.

X’s Exene Cervenka is another example, she once shared videos claiming the massacre at Sandy Hook Elementary School was a hoax and that another shooting was orchestrated by the government to get more control on guns – the second amendment is a big one for this punk icon – and if she has removed herself from social media these days, it may be for the best.

Recently Stone Roses’ Ian Brown revealed himself a conspiracy theorist and an anti-vax, with a series of controversial tweets: ‘GET BEHIND YOUR DOORS FOR THE NEW WORLD ORDER,’ ‘NO LOCKDOWN NO TESTS NO TRACKS NO MASKS NO VAX #researchanddestroy,’ even touching the Bill Gates/vaccines/microchips nonsense with this one: ‘To all of you asking about my medical qualifications I have the same as the computer seller bill gates ( biggest funder of the world health organisation)’…

The UK post-punk band The The also tweeted against Bill Gates a few months ago (the tweet has now disappeared) with a conspiratory image linking Gates to money and vaccine makers: ‘All roads lead to the Gates? Before we roll up our sleeves + open up our veins it may be prudent to look closer at those who’ll own the patents (+ profits) for the coming vaccines. Interesting Corbett Report documentary on Bill Gates corbettreport.com #ExposeBillGates’. Of course, this Corbett Report page is another conspiracy trash bag by a YouTuber who claims that Bill Gates is a Nazi eugenicist, Climate change is a hoax, vaccines never worked and are also a hoax,… while everything is about the New World Order. Shouldn’t these musicians check a few videos before promoting such a site?

But if you want real non-stop conspiracy, go to Eric Carmen’s Twitter account, a singer-songwriter who was associated with many bands in the ‘70s and ‘80s, and scored many hit songs, including ‘All By Myself.’ Not only Carmen supports Trump but he has tweeted conspiracy stuff about Bill Gates, vaccines and many of his tweets had the hashtag #Plandemic (the conspiracy documentary which went viral on social media) while he has communicated with QAnon people.

English DJ Nightmares on Wax has also tweeted about Plandemic, suggesting everything was planned in advance by media: ‘Plus it was Plandemic ! Everyone is getting played. It’s a info war. MSM is having a field day and trying hijack everyone’s energy.’ he tweeted.

The always controversial M.I.A. revealed herself to be in the anti-vaccination camp with a quite ridiculous tweet at the beginning of the pandemic: ‘If I have to choose the vaccine or chip I’m gonna choose death – YALA’

If most of these artists haven’t totally gone full QAnon, William Goldsmith, former Foo Fighters’ drummer has managed to do that, as this long rant posted on social media illustrates – most of his posts are hidden from his non-friends but some are visible here. The rhetoric, as well as the signature (WWG1WGA = ‘where we go one, we go all’), are pure QAnon vocabulary.

As for English singer-songwriter Robbie Williams, he had a YouTube interview with journalist Anna Brees back in June and suggested that the Pizzagate conspiracy theory hadn’t been properly debunked. ’Do I think the whole of the music industry and the whole of Hollywood are protecting these people? No, I don’t. Do I think there’s a Satanic element in this? Yeah I do,’ he said while talking about child abuse in Hollywood… isn’t it exactly what QAnon preaches?

To this list, I could also add Jim Corr, member of the Irish folk/rock band The Corrs, who has constantly tweeted against the lockdown, vaccines and other conspiracies, and also Anny Hardy of Giant Drag who has reposted the Plandemic movie and whose Twitter account is filled with anti-vax posts and other non-sense. A tweet like this one: ‘The only thing demoncrats like doing more than molesting innocent children is averting people’s attention away from the fact that they’re molesting & trafficking innocent children. And sometimes drinking their adrenochrome! If you talk about it you’re automatically a Trumper,’ comes straight from a QAnon cultist.

Adrenochrome, a song from the post-punk band the Sisters of Mercy, is also QAnon’s obsession, as they believe to be the drug favored by the global elites for their drug-crazed satanic rites. Adrenochrome, a chemical compound that forms by the oxidation of adrenaline, the stress hormone, is believed to be harvested from torturing children. Yes, you read that right, QAnon conspiracy theorists believe adrenochrome, the drug that the elites love, comes from the children they torture. Do these musicians believe this insanity? I don’t know, but they act as if they do!

If this sounds like B-fiction demented literature, it could be the case (adrenochrome is mentioned by Aldous Huxley’s 1954 essay ‘The Doors of Perception’ and in Hunter S Thompson’s ‘Fear and Loathing in Las Vegas’) but the adrenochrome harvesting theory is a reality in the minds of QAnons conspiracy theorists.

These are troubled times, and people are very confused, the pandemic has created a few monsters and if pedophiles do exist – the Epstein horrific saga has fueled all these conspiracies – Lady Gaga is not participating in blood rituals for an adrenochrome fix as QAnon cultists believe. Some musicians should take a break from social media.