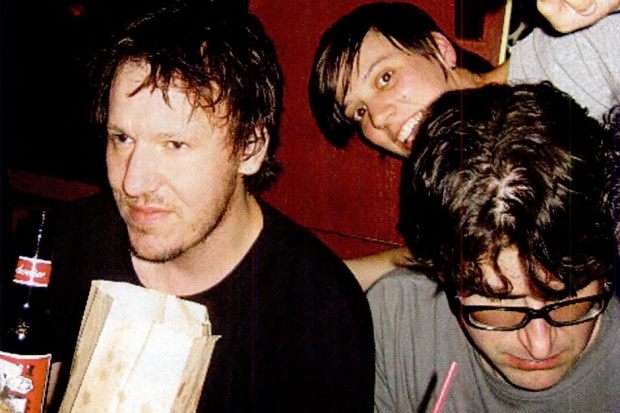 It seems that more and more people have decided to answer my messages about Elliott Smith’s death, and if there are still many unanswered requests, I got a new reply from musician Lou Barlow over the weekend. Barlow was a friend of Elliott, he was even photographed with him at his last birthday party.

I asked Lou Barlow the same question I asked every person when I get the occasion, what does he think about Elliott’s death and the mysterious circumstances surrounding it, first without explaining too much, but still presenting what I am trying to do. He first wrote the following:

‘his bio-dad contacted me and we had coffee and he asked me the same question.. my answer, I do think he’d b capable of stabbing himself because he seemed deeply self-destructive and angry..he also went cold-turkey after years of hardcore drug abuse.. if u are bent on going after Jenn suffice t say she gained nothing from his death and has suffered greatly already’

The last sentence didn’t really look like a good start for a friendly conversation, but I decided to explain more. I shared with him the opinion of forensic experts I had talked to, Elliott’s sternum injuries very rare in case of suicide by stabbing, Chiba’s removal of the knife and her refusal to talk to the police, and also the fact she sued the family, just to compensate his take on her having nothing to gain from his death.

Lou Barlow didn’t take it too well, and this is what he replied:

‘if th cops dropped it then I’m not sure what pursuing it further on the behalf of Elliott does..his father was looking for closure and had a tremendously painful relationship w his son .. I don’t know what you want t achieve ..justice for a guy who pretty much spent most of his life trying t hurt himself, or, let’s be honest, kill himself.. openly .. I dunno .. it’s v sad and if u r mounting a campaign t drag Jen t jail I would suggest there might b better things t do w yr time.’

It bothers me greatly that his friends are not even informed (or refused to be?) about the case. As homicide detective King clearly told me in an email (that you can read here), the police didn’t drop the case, and the case remains open indefinitely. I also found his sentence ‘if u r mounting a campaign t drag Jen t jail’ quite bizarre for several reasons. How could I drag her in jail if she is truly as innocent as he believes? I don’t have this power. I replied to him I was not ‘mounting a campaign’ since the police themselves never closed the case, but he may be done with me? We shall see.