More Than 100 M Views For Cardi B And Megan Thee Stallion’s Video! 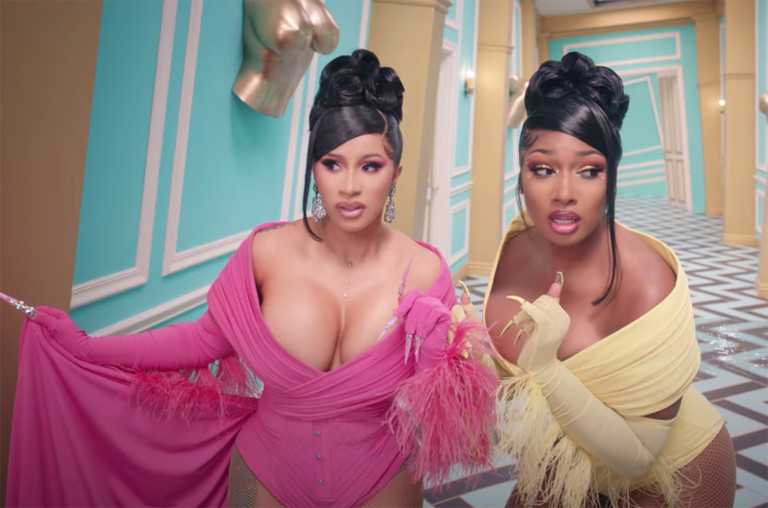 The rest is a series of strange visuals, from a sandy snake pit to a neon purple-green industrial dance room, with more women dancing, touching each other, taking the sexiest pauses, while rapping explicit lyrics around the acronym of the title: ‘Wet-ass pussy, make that pullout game weak, woo (Ah).’ The entire thing is bold and overly sexualized and an entire turnaround of what we are used to in terms of female sexuality. If we usually hear men talking about ‘pussy and sex,’ we now have two powerful female rappers taking the lead in the narration with an apologetic confidence.

Even though the song is visibly addressed to them, there’s no need for men and you won’t see one in the video, but plenty of other beautiful women including Normani, Rosalía, Mulatto, Sukihana, Rubi Rose and Kylie Jenner. While Cardi B and Megan are doing the split (and much more) surrounded by leopards or Siberian tigers, we discover more rooms occupied by superb women showing their Olympic-level prowess like $1M sex workers.

How can you top this level of opulence, decadence, and display of sexuality? I don’t think you can, while the lyrics describe self-assured female sexuality… and I doubt they have put a PG 13 on Genius.com.

Everyone could argue that there is nothing wrong about sexuality and especially female sexuality but women at the top of their sex game, taking control of their sexuality and getting wet in the pool had to trigger more than a few reactions from some conservative politicians. You can see a few examples below, and most of them are as over the top as the video, judging the women and the video complete trash, Meanwhile, the left uses the video to celebrate female empowerment, but even Russell Brand is asking himself if we are talking about a feminist masterpiece or just porn!

First, it’s not porn, but I get his grip, it’s way too vulgar for most people, although they must all be lying because 101 M views in just 10 days – yes the video reached 101M views when I was writing this – is quite a number. It’s extremely explicit, but we have seen that before, except it was coming from… men? There are thousands of rap songs that contain dirty lines, and you will find the equivalent in the rock and metal world. However, it is still not okay to accept that women can gyrate their pelvis as Elvis was doing it in the mid-’50s. Politicians who are still criticizing women doing it 70 years later, surely sound ridiculous, but let’s give the last words to Cardi B: ‘People be lying,’ she told Apple Music in an interview about the song and its reception. ‘People will be saying they don’t like hoes and they don’t like that pussy talk. People love it.’ Obviously, they do.

Cardi B & Megan Thee Stallion are what happens when children are raised without God and without a strong father figure. Their new “song” The #WAP (which i heard accidentally) made me want to pour holy water in my ears and I feel sorry for future girls if this is their role model!

The Democrats support Cardi B (Bernie Sanders spokesman) telling our daughters to be freaks & whores (WAP) because they know promiscuous wreckless sex leads to unwanted pregnancy, which leads to aborted babies, which leads to organ harvesting, and less black ppl in America ??

Cardi B & Megan Thee Stallion just set the entire female gender back by 100 years with their disgusting & vile “WAP” song.

The Democrats support this trash and depravity!

Reacting to #WAP – Cardi B and Megan Thee Stallion’s controversial new music video…
What do you think of this analysis…?
Full video: https://t.co/68ts6ZsZuw pic.twitter.com/hblm4kQvr4