World-Renowned musicians Miles Schon and Michael Shapiro (Many Miles Away) will be featured guests on the Happy Hour Podcast on Friday, December 30th, 2022 at 7:30 PM ET/ 4:30 PM PT live on YouTube.

Michael Shapiro began playing trumpet in grade school, followed in later years by piano, guitar, and vocals.  Fronting cover bands in Las Vegas as a teenager and early twenties, he naturally began writing and recording. Releasing his first album in 1995 with his band Trip and three albums to follow.  Trip toured with VH-1’s Rock Across America Tour opening for Duncan Sheik, Romantics, Edwin McCain, and  Cheap Trick. In 2003, Trip toured with Great White and on their 21st show in Rhode Island, the tour was brought to an abrupt and tragic end with the West Warwick Station Nightclub Fire. In 2005, after a two year hiatus, Shapiro recorded his first solo album, taking five of the twelve songs and released an EP entitled “Everything”. The single “Hope” received strong radio air-play across the US, thus landing him on a sold out national tour with the band Live.  He relocated to San Rafael in 2006 in search of the perfect-fit rhythm section and formed Reckless In Vegas. Michael and RIV have released two albums of original music and their latest release, “The Hard Way” features all re-makes. Shapiro is currently back in Las Vegas rockin’ Reckless In Vegas style!

Driven to ”rock” the guitar is the heart and soul of rising superstar Miles Schon. Born into a rock n’ roll family as the son of Neil Schon (guitarist of the iconic band Journey) his unquestionable destiny was set forth at age 13 the first time he picked up a guitar. As a self taught musician Miles has developed his own unique style and artistry and is acclaimed for his dazzling speed, fiery solos, soulful quality, and crushing dedication to his craft.

Raised in Marin County, Miles has played the San Francisco Bay area for several years as well as touring all over the globe. As a singer, songwriter, producer and musician Miles has worked and collaborated with a vast line up of fellow artists including Grammy winner Will Champlin, Bill Champlin from the legendary band Chicago, Jonathan Kane from Swans, Ross Valory of Journey, Eric Martin from Mr. Big, Cole Tate, Terry Haggerty, Scott Page from Pink Floyd, Stephen Perkins from Jane’s Addiction, and many others.

Guitarist Miles Schon and vocalist Michael Shapiro alongside producer Tom Fletcher have created a band new original project titles Many Miles Away, with a new sound born in a world of uncertainty. New album to be released in early 2022. Catch ‘em live. 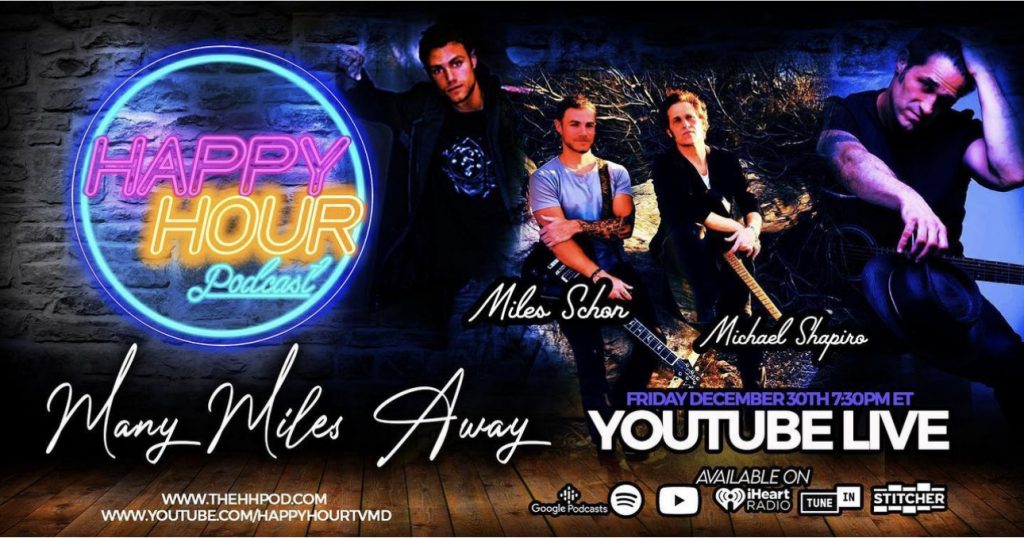 The Happy Hour Podcast was created in June 2020 in the midst of the pandemic.

It was the brainchild of the main host Ray Chace aka professional wrestler for over 20 plus years Chace Rawlings.

The HHPod is a bunch of friends hanging out in the basement drinking and having a good time. We talk about the same kind of stuff we talk about whenever we are around each other. That includes snickering in the corner at weddings, baby showers, etc. leaving their wife’s wondering WHAT THE FUCK IS SO FUNNY?

“There’s times where we have civilized convos with our guests, for the most part it’s as unscripted as possible so you get that authentic feel to it.”

“Call it on the fly” a popular lingo term in the world of pro wrestling is what Ray likes to do. Have bullet points but the rest call as you go.

All the guests have a ball on the show and anybody from any walk of life is welcome. In a world where everybody is soft the guys are always going hard.

The official website for The Happy Hour Podcast may be found at https://www.TheHHPOD.com

The official website for Many Miles Away may be found at https://manymilesaway.com