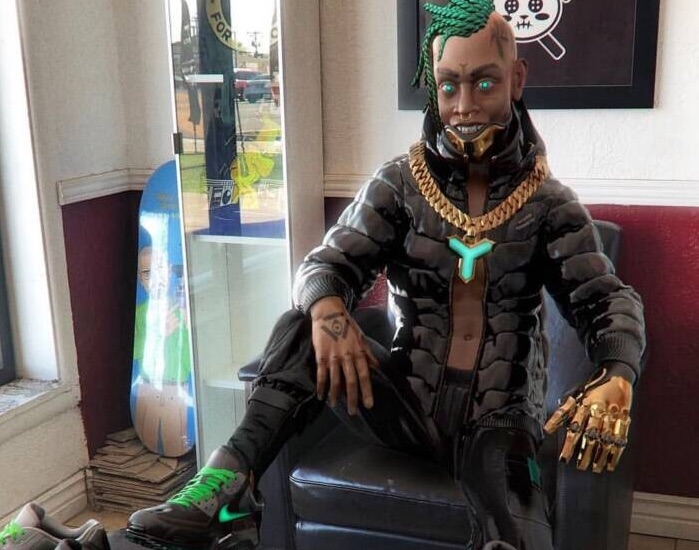 Listen to the three tracks below, ‘Moonwalkin’,’ ‘Internet’ and ‘Speed Demon’ and you will probably recognize all the marks of contemporary hip hop, especially in the first two: the tone, the beats, the language, the aggressivity, the subject, everything sounds familiar. Nevertheless FN Meka is not human but he is already very popular on TikTok… where else?

FN Meka is a robot, the world’s first AI-powered robotic rapper, and he is already responsible for a bunch of hip hop singles. How could this thing already have more than 9M followers on TikTok? With his neon green braids, nose ring, face tattoos, piercing green eyes, gold teeth and sport cars, he has the look and the outfit of any current rapper. Just like Lil Pump, he is even powered by Vydia, a distributor that gives a platform for his label, with a ‘cutting edge technology that provides the digital infrastructure for audio and video distribution.’

FN Meka lives in a dimension somewhere between the human world and the digital world but he produces a music very similar to any rap song you can listen to, involvng plenty of auto tune technology. A robot doesn’t have a real voice in the first place, so his voice had to be auto tuned I guess. He is on every social media that exists, but his popularity seems to be limited to TikTok. Over there, Meka is basically a digital influencer – look at his page, it’s filled with product placements from Rolls Royce to Starbucks to KFC to Gucci truck, to energy drinks to Apple products.

According to what I have read, his latest single ‘Speed Demon’ is an ode to a custom PS5 supercar and it will serve for the promotion of a virtual streetwear company called RTFKT. I didn’t know it would end up to this but here we are, these digital sneakers were sold for $28,000 on the Chinese digital marketplace Treasureland. When I read stuff like this, I feel old, very old. I just want to live in a world where the only sneakers are made for runners and where human rappers perform on a stage. Honestly, this new world looks more and more like an episode of Black Mirror.