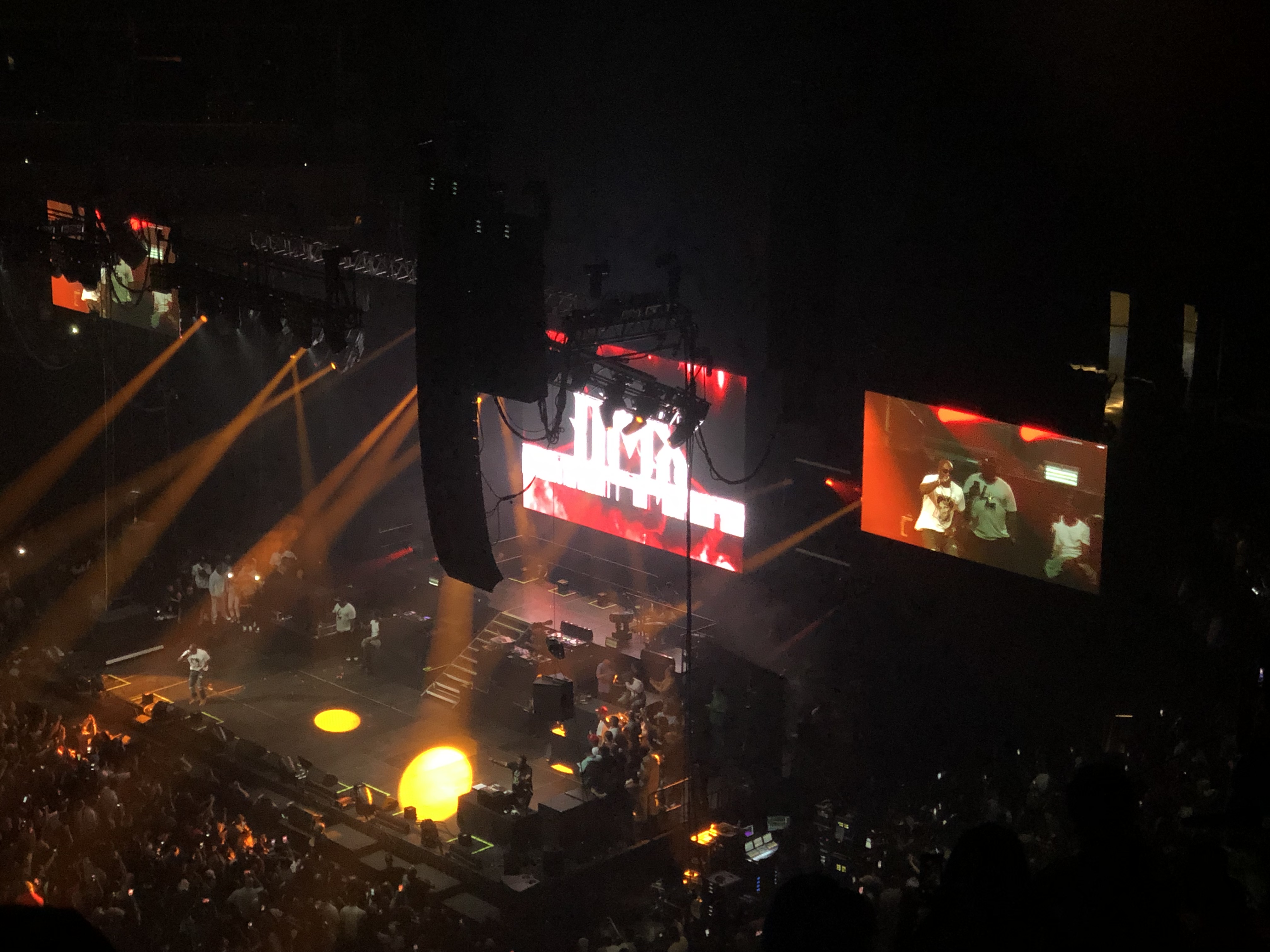 If N.W.A. were the John The baptist of gangster rap, both Das EFX and M.O.P. were early, Brooklyn based, disciples, and last night they opened the evening for the ten MCs of “Masters Of Ceremonies” at Barclay Center Friday night. With headliners Snoop Dogg and 50 Cents hours into the future, they set the tone with the definition of old school rap: wheels of steel under hard bass and harsh raps (including a surprise appearance by EPDM) for fifteen minute sprints through their hits, DAS EFX with the glorious “They Want EFX” and  “Real Hip Hop,” and “How About Some Hardcore?” from M.O.P. The rapping may have been strong, both acts know their stuff, but the sound was typical Barclay and typically more than typical because early rap, when it got out of teen parties in the Bronx, always suffered from sound problems.

By the third act, legendary reggae guy Junior Reid the problem was a problem till it wasn’t anymore, real rap bands on the late 80s to early 90s define “it be like that,” sound, but rubber dub dub needs the sinking feeling, and Junior didn’t have it and deserved it, the former lead singer Black Uhuru is as great as dancehall gets and it was pure sludge for the first seven minutes, though I caught a snippet of “One Blood,” my companion for the evening, Justine Giordano, began rapping along so I guess she knows her 90s pop better than I do…

The evening had DJ Enuff killing it with 90s classics before the evening began promptly and continued with quick segues from set to set, fifteen minute sprints by one truly huge star till the next, till a half hour break had me leaving early. If I realized that headliner Snoop planned to switch set positions with 50 cents I would have waited longer. I was really, really there for Cam’ron and Fabulous, so I got what I wanted.

I’ve wanted to see Cam’Ron ever since SDE in 2000, and have missed him, even with the Diplomats, time after time, so I was beyond excited to see one of the great flows and more brutal attitudising in the business kill it with hit after hit culminating in the addictive, early “Hey Ma,” better than the 2002 recording. DJ Enuff then introduced Korey Wise of the Central Park 5, one of the the wilding black teens convicted of rape (Trump recommended the death penalty at the time), Korey was sixteen years of age at the time and spent seven years in prison. The convictions were vacated when the real rapist confessed. Korey basked in the applauds for a moment and was gone. I once saw Fabolous perform with Pusha T at Roseland and blow him of stage, Friday night he was good not great, though he did save his 2014 “Lituation” from history and pulled off “Into You”. Meanwhile, The Lox performed some freestyle, some greatest hits and lots of throwdowns, Jadakiss is the star, Styles P the businessman, but Sheek Louch stole the show as simply the best pure rapper.

Atlanta’s T.I. is the architect of modern trap music and he has the hits to prove them, he performed a strong, smart, fast and exciting set of early trap hits. But DMX got the roar of approval, the Hell Is Hot rapper has his prison time, and drug addiction, behind him, and while Jesus is as Jesus does, there was no denying the great rapper was saved and the saving saved his skills. He had the second best voice of the evening, just luxuriating in the audiences adoration while performing “Ruff Ryders Anthem,” “What’s My Name,” “Where The Hood At?,” “What These Bitches Want” and one of his all time greats “Party Up”. It was easily the most moving performance of the evening, it was as though through his faith DMX found a way all the way back, and though Justine missed Damian, she didn’t miss it that much.