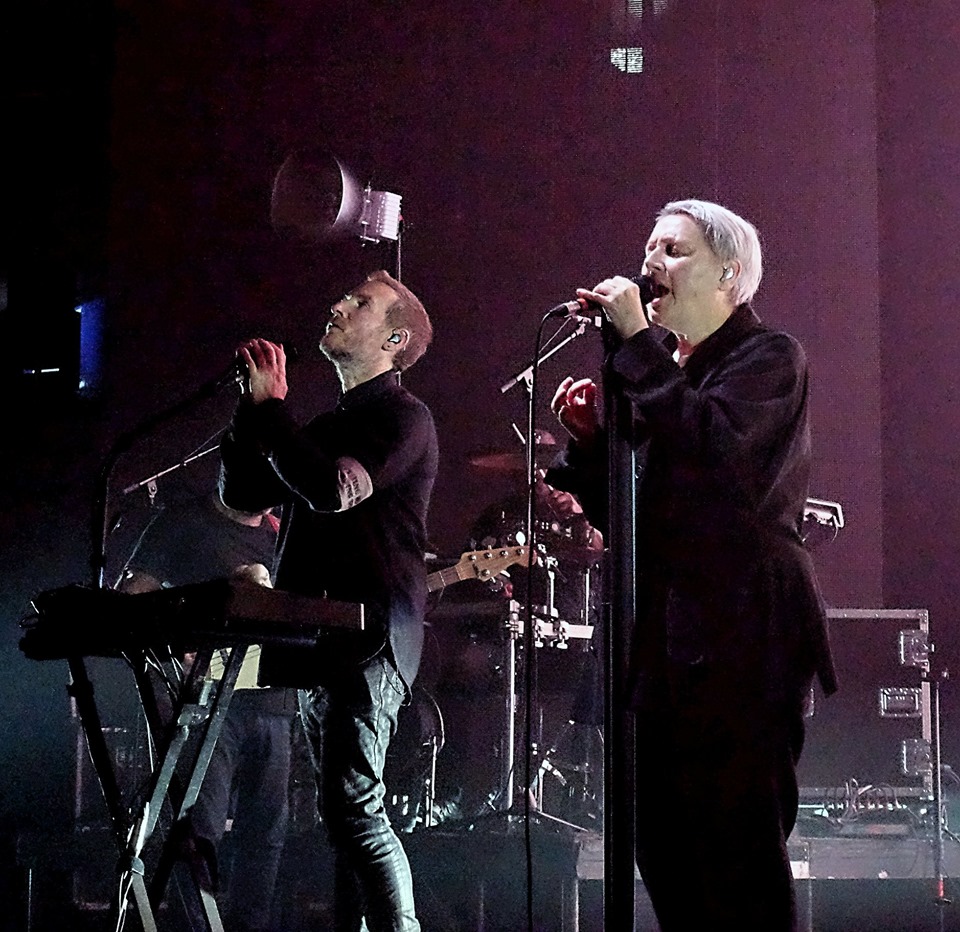 Bristol collective Massive Attack is celebrating their iconic album ‘Mezzanine’ with 3 nights at the Hollywood Palladium, and last night was truly an immersive and incredible sonic and visual experience that only the legendary trip-hop band could have concocted.

The tour, ‘Mezzanine XX1’, was described as a re-imagination of ‘Mezzanine’ using ‘custom audio reconstructed from the original samples and influences’. I obviously expected them to play Mezzanine in its entirety, but Massive Attack had a very unpredictable vision, separating themselves from any anniversary event which usually sees a band play an album plus several other songs from their catalog… This is not what was in store for Massive Attack as it was so much more than a traditional nostalgic anniversary.

It was actually the opposite, turned toward the future after warning us about the past and the present. Massive Attack have transformed their shows into multi-media art, but they are not there to entertain you, they are there to wake you up, shake your psyche, destroy your hope in humankind and the future before reinstalling it. With the projections of documentary maker Adam Curtis on the giant screen behind the stage, the music became a powerful soundtrack for a collage browsing two decades of trashy pop culture, TV news, world history and terrifying scenes of war… Images never stopped throughout the entire show, transforming the show into a disorienting journey through our collective memories, from the tritest and most trivial piece of news to the most dramatic and violent footage, as if we were surfing YouTube at the speed of light,… with plenty of subtitles… sentences meant to reinforce our paranoia, describing our current world and the threat of the machines taking over.

‘The first computers had been used to design the atomic bomb’, we could read over the images of a nuclear mushroom before they had even played the first song…

With Robert ‘3D’ Del Naja’s creepy whisper, Grant ‘Daddy G’ Marshall’s dark and unemotional ruminations, with the band’s complex, thick, sampled textures, Massive Attack have always installed a claustrophobic atmosphere only relieved by the choice of their guest vocalists, providing ethereal moments of pure bliss. This was particularly true with ‘Mezzanine’, and this new production just reinforced the tension, with the 20-year-old songs perfectly fitting our current world of data harvesting and information manipulation,

And the future became predictable’ … we could read on the screen still saturated by news footage, horrors of war, conflicts, royal weddings, and world pop culture.

After the nuclear bomb/electronic intro, they right away started with a cover, and the first song of the show was The Velvet Underground’s ‘I Found a Reason’, a life-affirming declaration just after the apocalypse, which seemed to be the tone of the night. But it was almost a shock to listen to Del Naja sing with this sweetness and melodious tone, something so unusual for him, but immediately after that, we were back to alienation with ‘Risington’. Among the acknowledged samples used for Mezzanine, they covered the Cure’s ‘10:15 Saturday Night’, Ultravox’s ‘Rockwrok’, working as both homages and deconstruction of the album.

I just regretted not to have seen Daddy G more often in the front of the stage sharing vocals with Del Naja, but the nights belonged to several vocalists: Reggae legend Horace Andy during his emotional parts echoing distant dub-reggae parties, and Liz Fraser, of Cocteau Twins fame, the original singer of ‘Teardrop’, which was Massive Attack’s most famous hit. With her soprano range, she provided the eeriest moments of the night, her voice going from crystallin to ghostly, contrasting with Del Naja’s sinister murmur and Horace’s quavering vocals, even revisiting one of his songs, ‘See a Man’s Face’. Sara Jay, only appearing on screen, sang the spooky vocals of  ‘Dissolved Girl’, but Liz Fraser ended up singing four songs including a luminous fireflies-like Seeger cover ‘Where Have All the Flowers Gone?’… The brightness of the music was working in pure contrast with the images still projected behind them while a loud roar of protest escaped from the crowd when Trump made an apparition.

While acknowledging one of their main influences, Bauhaus’ ‘Bela Lugosi’s Dead’ seemed to fit them to perfection, going bass-heavy with the best gloomy green light of the night, whereas the intense ‘Inertia Creeps’ and its Turkish electro-beats brought the venue on fire and was immediately followed by Ultravox’s euphoric glam rock ‘Rockwrok’, sampled in the same song.

‘All around you are two-dimensional images of people who died long ago,’ we could read on the screen
‘Every image every frame was collected by the machines’

The images and sentences on screen scrolled faster than I could process, as a long segment on the drug crisis was collapsing with more war images

‘While outside the pleasure dome, the endless wars go on and on’

The obsessive preoccupations of the show, the mention of the control by the pharmaceutical-military-government system were restlessly reinforcing Mezzanine’s gloomy textures.

Very few bands could get away with such heavy handed politicized surroundings, but Massive Attack have always done it and it fits them like any other.

‘Angel’ sang by Horace and of course, the visual rays of light of ‘Teardrop’ sang by Liz brought some of the most poignant moments of the show, working like messages of love juxtaposed with an Avicii EDM interlude, sounding like a complete fanfare oddity in their world of shadows and abrasion.

The alienating loops of ‘Group Four’ let me hungry for more, much more, but there was no encore, the prophets for our dystopian times had already disappeared as fast and discreetly as they had come on stage, leaving us with messages of hopes during these last songs:

These slogans could just be a good excuse to sell merch and new t-shirts, but they allow the Massive Attack-Curtis team to remind us of their relevance in a world going mad. The band is unafraid to match Liz’s beautiful vocals with the most horrifying images, as they were unafraid to encode their album into synthetic DNA,… an artistic prowess embracing technology they have been warning us about? Data was going to make you free? The irony! Last night, Massive Attack were unafraid to have faith in the future despite the apocalyptic nightmare they had just depicted for about 90 minutes. 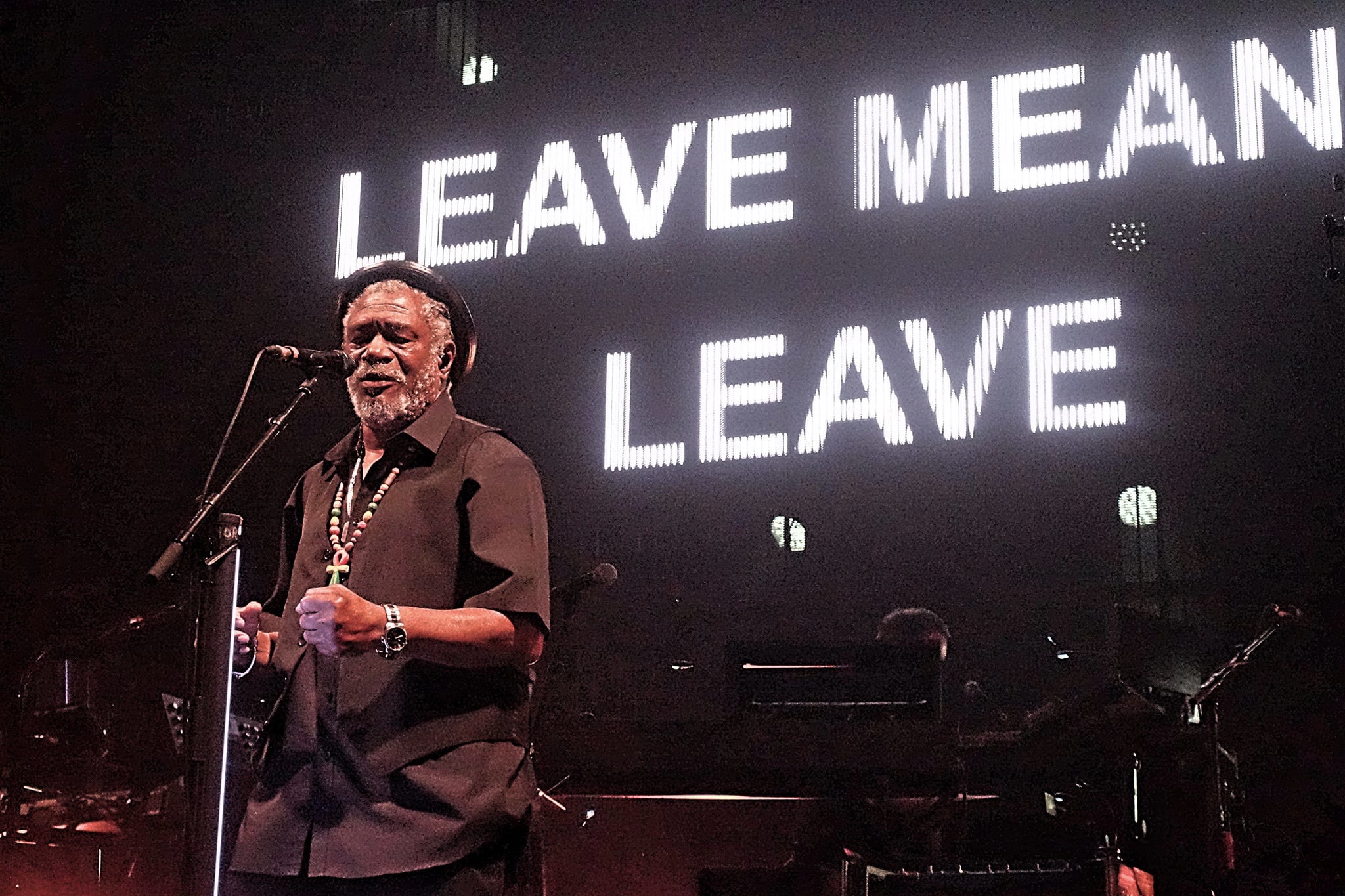 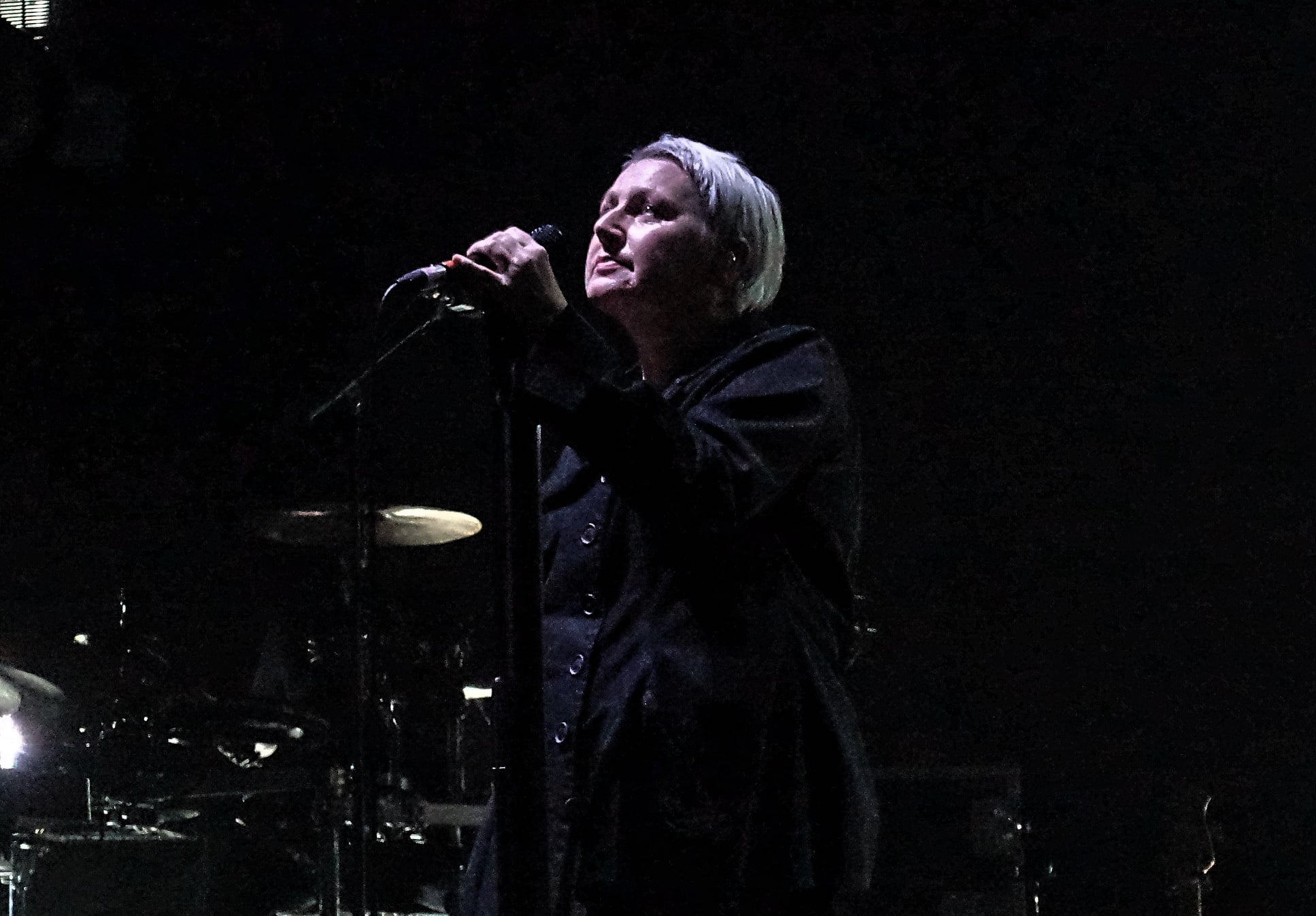 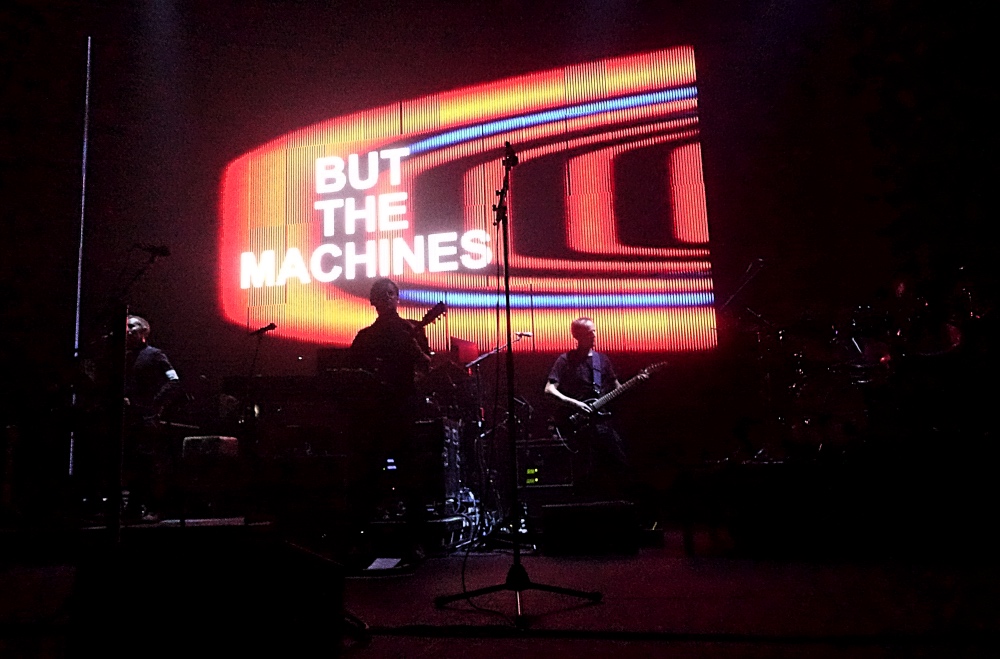 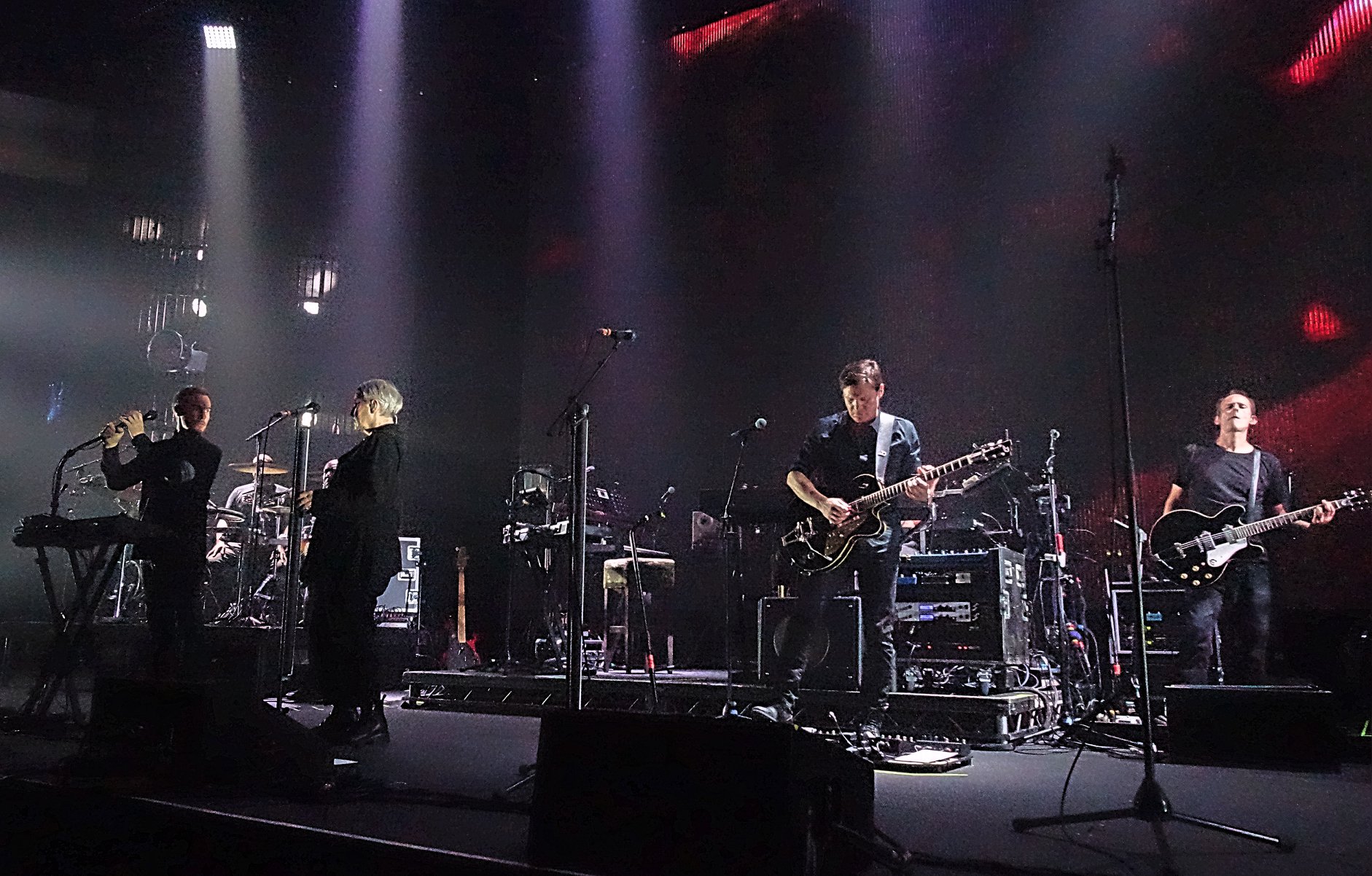 Massive Attack at the Hollywood Palladium 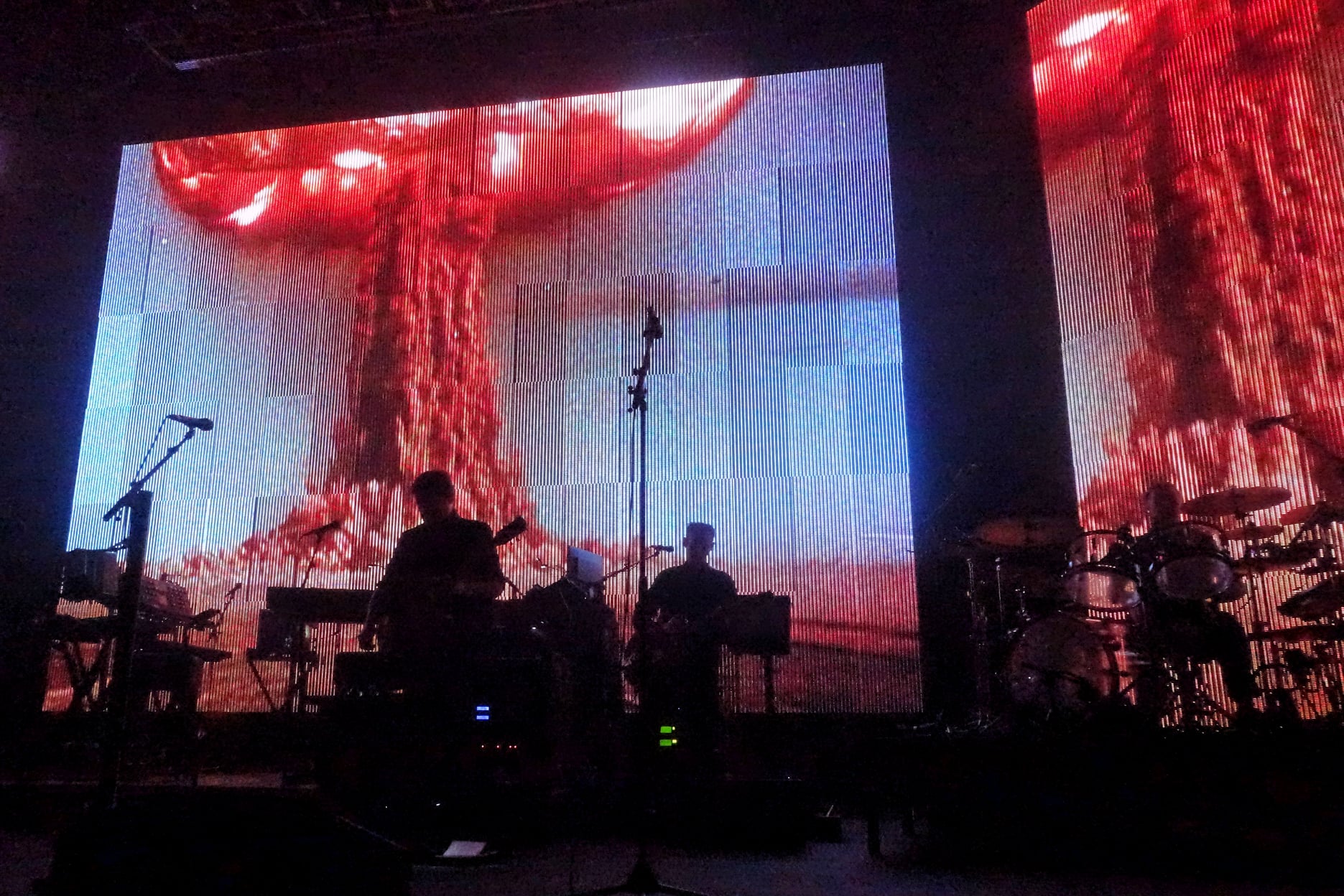 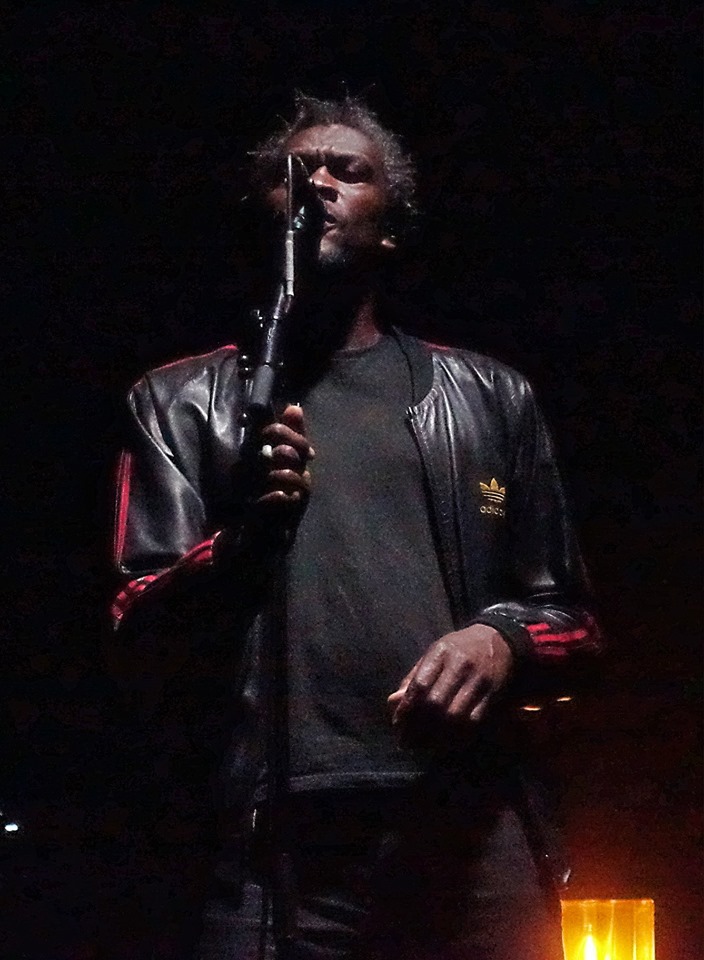