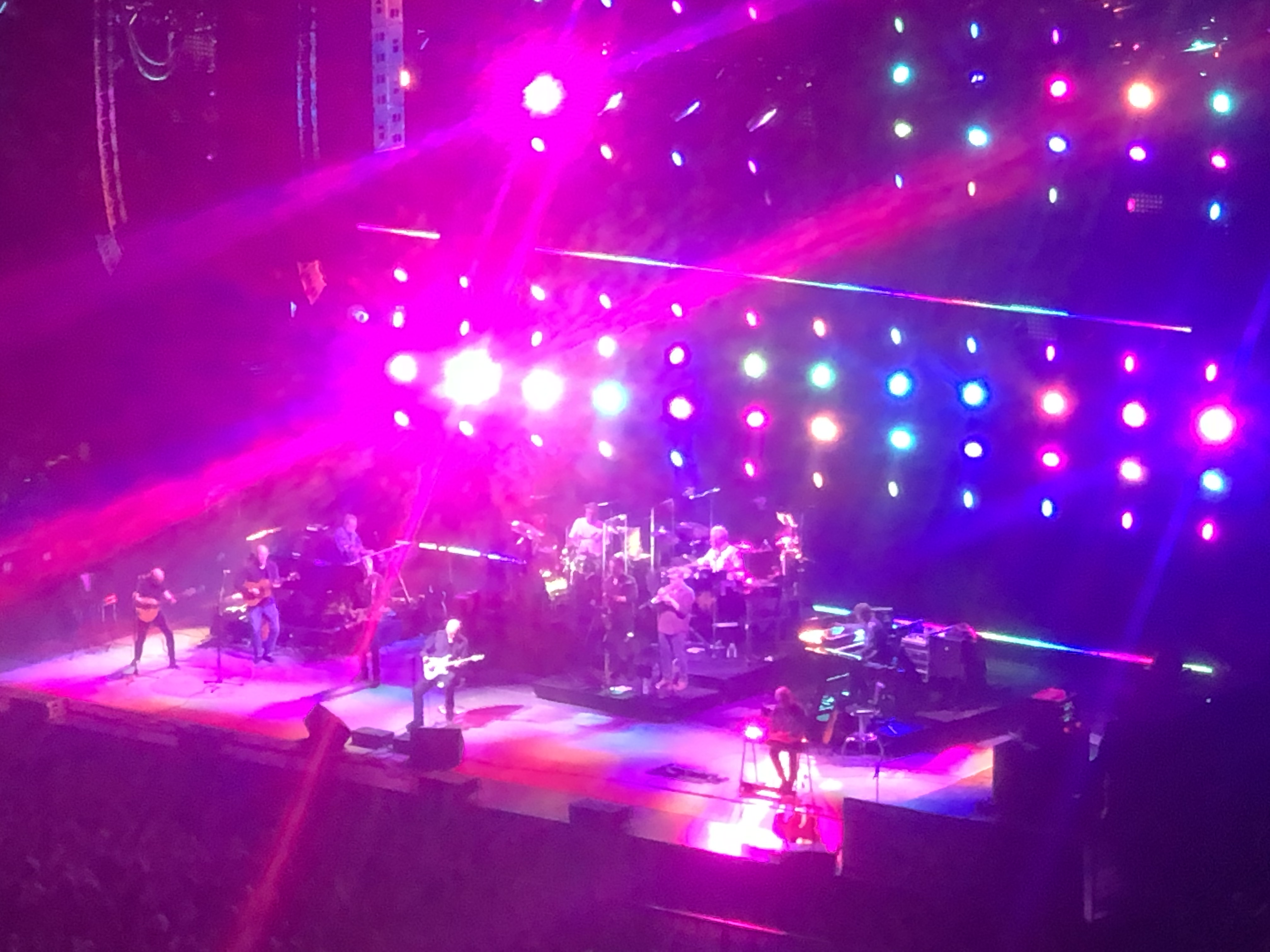 Performing arena rock is its own, unique, hell of problems for a rock star to traverse, different than theaters for rock bands, and different to arenas for pop bands, arena for rock bands can easily get lost in space. I’ve seen Kings Of Leon fail, I’ve seen R.E.M. fail, and I’ve seen Neil Young And Crazy Horse succeed. Yesterday, opening act Bonnie Raitt turned MSG into an intimate theatre while covering John Prine, and Mark Knopler seem acutely incapable of bringing the level of energy and commitment to his material that would grab a practically sold out MSG,

I went to the show with rocknyc.live writer Ken Davis, who had seen Mark before, and noted how watching Mark -who has a  guitar styling that is a burnished melodiousness unlike anyone else, guitar seem to pluck notes out of thin air, is one of the great joys of the performance, and was something I should pay attention to. A great idea, except Mark chose not to use close circuit TV, and from our seats we couldn’t see anything except a busy with musicians stage musicianing. Bonnie had the same problem but Bonnie is a better MC, Bonnie is at ease and yet is at attention, she was playing songs that ranged from the Fabulous Thunderbirds hard rock blues “I Believe I’m In Love With You,” to her pop smash hit “Let’s Give Them Something To Talk About” to the song she performed with Prine while inducting him into the Songwriter’s Hall Of Fame, “Angel In Montgomery”: the latter garnered her a well deserved standing ovation.A fast on its feet  arena rock and blues, and a real treat.

Knopfler, the former Dire Strait, is a great guitarist, a wonderful stylist whose sound seems to be an echo of itself and it almost reverberates in his wood haven. And he has a lot of songs, some of them very good, but he is a dreadful bore. Performing song after mid tempo lull song, it drifts into the distance between him and us.  The melodies are there, the ten piece band are all pros, between them they can play 49 instruments, the songs are great (though Mark isn’t much of a lyricist), and while Mark, who is  70 years old, sings old, gruff and ponderous, his pleasure in the proceedings is clear. But without close circuit TV, you can’t see anything except pink lightened old men doing something.

Wednesday is one night where proximity would have changed the evening. If you were in the first ten rows you must have seen Knopfler fully engaged with terrific material, but from anywhere further away you saw a band disconnected from the audience, and unable to feed on their energy., the entire show was a slow as molasses drag to nowhere.. When Van isn’t on his game, when he Celtic daydreams, he sounds like Mark. An old fashioned and boring performer completely unsuited to Arenas. I was waiting patiently for “Local Hero” but by the time it arrived, I was long gone.