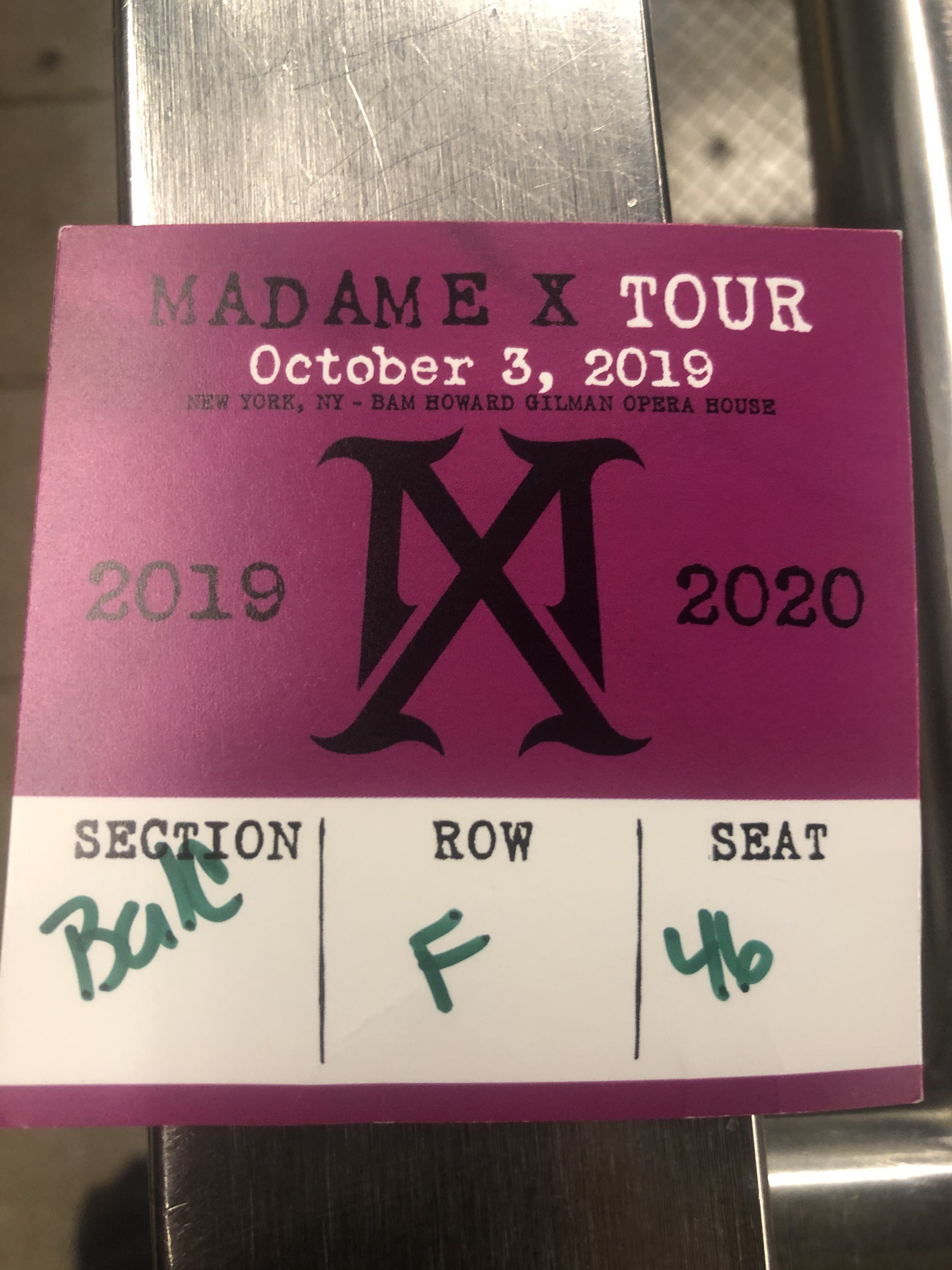 It is Madonna’s version of “The Discreet Charm Of The Bourgeoisie” -the Luis Bunuel movie where a dinner party is disturbed time after time and no one gets to eat. Less so now, because word got out at how late she gets on, but at the start of the 1980’s superstar residency, when people  thought that an 830pm start meant something like that, fans were left waiting for three hours, with no cell phones, while music played in the background. And you know what waiting at concerts means? It is a study in frustration and boredom, every time the music stops you think she’s coming on, and every time it starts up again, your heart sinks. It’s as though you are never getting out of the Brooklyn Academy Of Music theatre alive. And even knowing what to expect, last night she arrived at 1050pm, tiredness is overwhelming. The audience was quite quiet through out the evening (by which I mean night) and part of that was exhaustion.

At the entrance of Howard Gilman Opera Theatre, the staff gave a start time of 1030pm, and inside it was a Madonna bazaar of merchandise and alcohol sales. For an artist of Madonna’s size, the 2098 seater is tiny (of the last two times I saw her, one was at a 70K seater, the other at a 20K), those weren’t these. At MSG in 2015 (here) , promoting her best album of the 2010s Rebel Heart, she mixed tons of hits with a handful of tracks from the album of the moment in a fan friendly killer set that was nothing much like last night. For the Madame X set she leans hard on Latin (both Spanish and Latin American idioms, cha cha cha), especially   Urban Latino and Fado, with twelve songs off the newbie (but, no favored by all “Bitch, I’m Loco”) and ten from all points west. So there is a give and take, you lose so many songs you really want to hear, but you gain intimacy.

Yesterday  was the twelfth of the seventeen night residency. It is still early, there are fifteen nights in LA, London, and Paris, among others, to take her through March of 2020, but right now this second it feels like a very New York City happening if only because except for the Lisbon stop (and maybe Miami Beach) she won’t get a more Latin flavored place. This very evening I am going to see Maluma (the young Colombian singer who is the meeting ground between Bachata and Reggaeton), so good on Madame X, at MSG. We do Urbano Latino, and every other form of Latin music here: indeed, it is what we do. That’s not quite why, it feels so New York. Madonna comes down off her cross and mingles with the proles, it is a private dancer performance, that crashes the fourth wall, the wall her art and  dance pieces on tours like the perfecting the production, “Blonde Ambition,”  built. The intimacy of “Madame X” is a form of theatre of the real, after years of keeping us at arm’s length, she embraced us. Sitting next to audience members and speaking to them, (no set up, one fan said she had saved him from suicide, the hug was real), selling a Polaroid of herself (she got $2K), discussing randomly, normally, and from a diva distance. Everything was precise set pieces of multimedia politicizing but with room in the middle and on the sides to adapt to the audience (“I can’t read you,” she said. I could: we were tired).

The evening began at 10pm with four members of her band, including Portuguese guitarra player Gaspar Varela, the grandson of the fado singer Celeste Rodrigues, performing Spanish style instrumentals of stuff like (the closest we get to) “Like A Virgin” and “Who’s That Girl”. Twenty minutes after the welcome opener, there she was, at a typewriter, banging out James Baldwin quotes (a lovely bloke no doubt, but as aphorisms go “Artists are here to disturb the peace” ain’t so hot). The two hour plus performance featured a 41 member troop of dancers and musicians, and a gorgeous set with film of videos and images that lapped around the edges of the stage. Nothing was being spared (and Madonna claims to be losing money on the shows) and the songs as set pieces were each powerful and illuminating. Starting with “God Control” (meaning gun control) and “Dark Ballet” (with its Tchaikovsky interloping) before hitting us with “Human Nature” and bringing out three of her children to help with “Express Yourself” and later her famous soccer crazy son David, the one that caused her to move to Portugal in the first place. That ended the first act.

The second act included the why won’t it go away, “American Life” -the story of a woman and diarrhetics,  Madonna changing costumes behind a desk (echoes of Lady Gaga’s Artpop tour). Act three got deep into Latin pop and folk at the heart of the performance, and an overlong  slow down of the proceedings met with polite applause by an audience caught snoozing. Madonna ain’t great at this stuff and it took the highlight of the show, “Medellin” with Maluma on a giant video, to bring us back to life.

I’d mention the politics but it is liberal USA 101, pro gun control, pro choice, anti-Trump, check, check, and well, I just assume it but consider this: she didn’t bother to fuck him in the 80s so you gotta think… . In New York City, minutes from Marcy, she’s is preaching (just like Papa) to the converted.

She was safe after that, with “Frozen” another outstanding moment. But it was sooooooooooooo late, I left at 110am (what a pain getting home) and it was still going on. The set was failing at the litmus test, people were exhausted and she wasn’t waking them up.  If it had begun at 830pm, everybody would have been much happier… as far as Madonna tours  go I would say:

Admittedly, I’m not a huge fan of her on stage.

So as I leave to “Like A Prayer,” don’t let my grade fool you. If you are a Madonna fan it is an absolute must see. As I said, for all its strangeness and weaknesses, it is very, very real and perhaps I shouldn’t have snarked at Baldwin, perhaps it is an unusual but not illegitimate project to disturb your fans, to punish them for loving you. The punishment has its downside for her, up for us, tickets are now very cheap ($100) on the secondary market after being almost untouchable when it was first announced. People were bored and disappointed but also challenged and put through the ringer and not everybody wants that. I, myself, don’t like being fucked with: I have this nightmare where a disembodied voice warns me “Madonna will be on the stage shortly, please take your seats” and yet she never shows up, over and over again, on a loop for eternity. The set wasn’t great, the setlist certainly wasn’t great, but it was a real event, it was joining a community (and in that sense, like Bruce on Broadway) where you’ve either seen it or you haven’t. If it started at 830pm,  I would go again in a second. 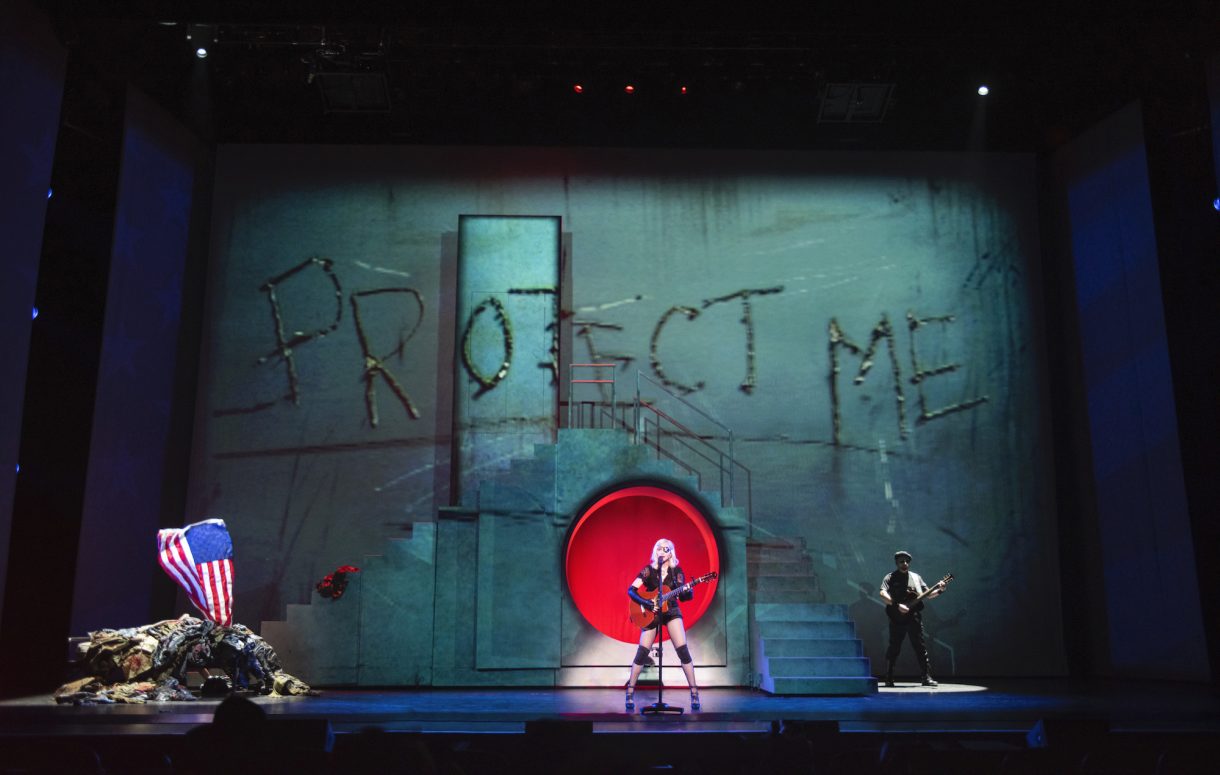