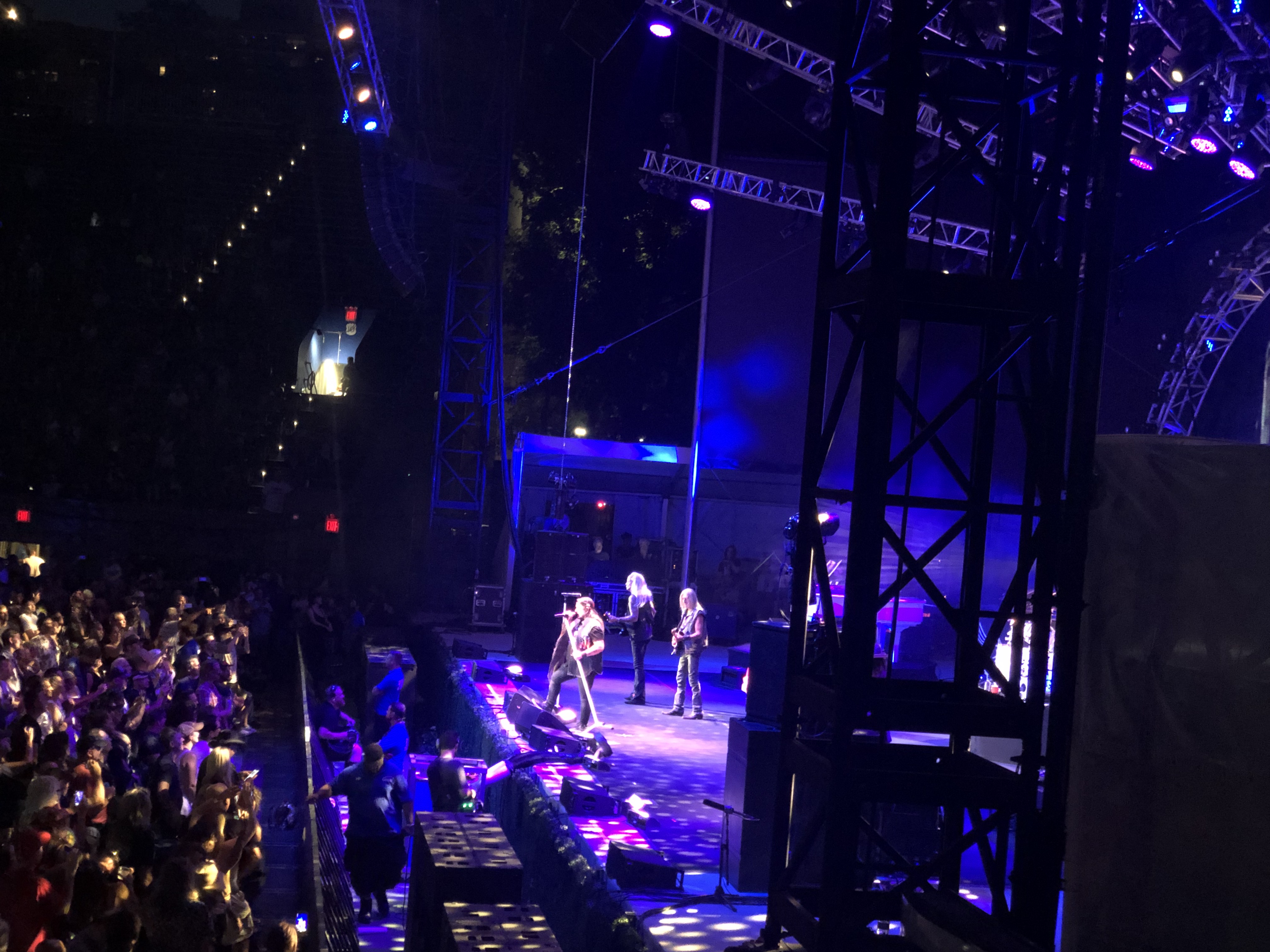 The stars and stripes replaced the confederate flag at Sweet Home Alabama true believers Lynyrd Skynyrd Last Of The Street Survivors Farewell Tour, last night at Forest Hills Stadium. But the gray cloth, also wrapped around Johnny Van Zant’s mic stand, represented the old South anyway. Most days, these Southern racist bullshit tropes don’t much matter, we came for the boogie, but on a day where ICE agents were breaking into immigrants homes and carting them off to jail, on a day where exaggerated Nazi, Germany, comparisons came home to roost, that joke ain’t funny anymore.

Of course, Johnny ain’t Hank Williams Jr, a disgrace to his father’s legacy as the greatest country singer of all time, opening for the band with his hulking, belligerent assholeness. The Republican blowhard has been destroying the “Family Tradition” for decades, and he did it pretty well except for a boring acoustic portion, Williams did his best to tie himself to a tradition that started with his dad and then sidetracked to Sun Records, before going South in the 70s. He isn’t good enough. Though Williams had the intelligence not to follow Kid Rock to the White House in 2016, he remains the sort of racist who would insult EXPOTUS Obama purely for the color of his skin. While Williams can certainly sing his father’s greatestest hits, he can’t even do that without faltering “Kaw-Liga,” became a jam out for no good reason, though the “Move It On Over” was terrific. I wish we had gotten more Waylon Jennings and less ESPN Football Night, still it was harmless in its harmful, hateful way. The best thing you can say about Hank is that June Carter Cash was his Godmother.

Lynyrd Skynyrd had the potential for true greatness, but the plane crash ended it. With the death of Ronnie, the band as a breathing, rebellious, badass tear-ups closed. After a ten year hiatus following the crash, they reunited for a tribute concert and have been on the road ever since. The band started their career as the southern Rolling Stones, and they always had a biker, edgy violence to them. The electric guitar as phallic rifle tote imagery, and the sexism and drugs as the deep south in the 1970s, was there stamping grounds. All of that is gone. Johnny was never the lead singer Ronnie was, Ronnie was all husked out drawl -he dared you to make something of it.  Lynyrd went through the early 1970s numbers and went through them very well, “What’s Your Name,” “That Smell,” “I Know A Little,” what passes for a power ballad “Tuesday’s Gone,” set stand out “Simple Man,” and the obvious one two to close the evening, “Sweet Home Alabama” and “Free Bird”. It wasn’t great art, it wasn’t even great rock, but it was sufficient nostalgia.

All well and good, if you can get past the white supremacy. This isn’t 2012. It is more and more difficult to laugh off the ugly, middle aged loathsomeness. The litmus test for a country in decay its how they treat its weakest members. Fear of a black planet is asinine, it is meaningless, and it is hurtful for Americans: clearly the best and healthiest homosapiens come from the largest gene pool, how can HWJ praise Sun Records and simultaneously ignore that its roots lie as much in black blues and gospel as hillbilly folk? What enormous ignorance. Great art might well have lousy politics,  from Ezra Point to Leni Riefenstahl to Martin Heidegger, the worst countries and the worst philosophies imaginable have given forth to some of the greatest artists. But celebrating bad people seventy years after the fact is not the same as celebrating them while ICE Agents are arresting entire families. The obvious answer to South and Central America is something akin to the way the US propped up Europe after WWII, they don’t come here for our culture but our jobs, help them with their own economies.

Whatever, seeing the loathsome slimes, hateful South self-congratulation puts a pall on the entire evening. HWJ claimed if we don’t like it we can kiss his ass. Kiss it, kick it, send him back to his hayseed bullshit Alabama. Fuck em both.