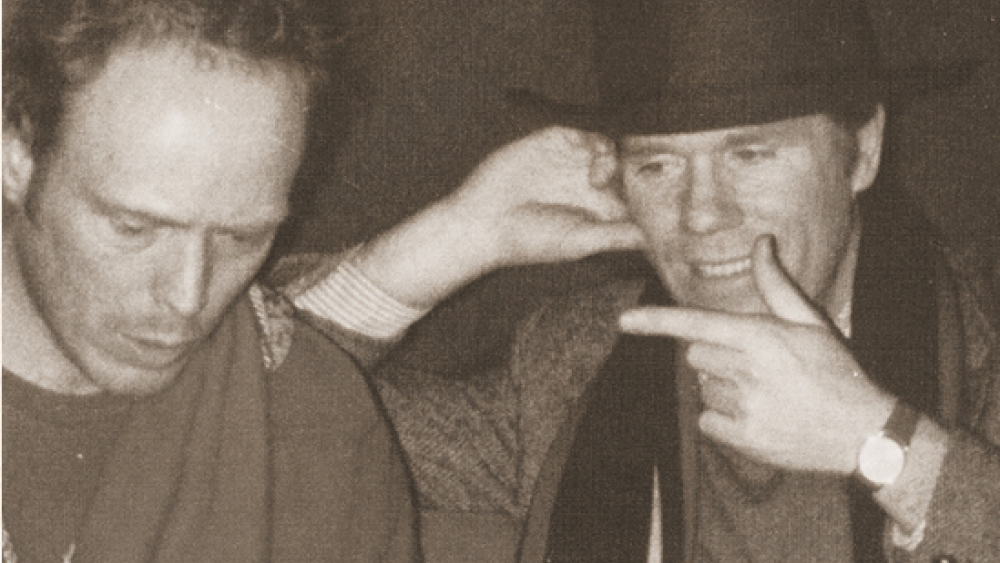 Featuring  Suzanne Vega, Steve Forbert, Terre Roche, Christopher Guest, Michael McKean, and Harry Shearer,  and Wesley Stace, Loudon paid tribute to his closest friend, and unfinished version of what Wainwright became, George Gerdes,  in a live streamed show “The Great Unknown”. George, a folkie wise guy ala Loudon who never made it as bi in music (though a popular character actor)  died on New Year’s Day, 2021. Loudon, along with the Roches, pays tribute to the songbooks and written words, of a man with neither a page in Wikipedia  nor either of his two 1970s albums available on streaming services. Gerdes is best remembered as a character actor, he appeared in everything from Aaron Sorkin  on Broadway to Seinfeld episodes, and was acting till the time he passed at the age of 72.

I decided to watch the live stream for $23 after a pleasant (viewing wise at least) experience with The Tibet House last week (here) on the Mandolin Platform. I’d had terrible experiences on live streaming platforms at the start of the pandemic, a particularly bad one with Laura Marling -though a fantastic, alone in lockdown summer 2020 performances at Union Chapel (here)-  I ended up watching it on my cell but I really didn’t want to, and rewatching on youtube .

So a year after I caught the Tibet House live at Carnegie Hall, I did it again online and I was pleased and double dipped to see Loudon tributing his fallen best friend. I’m not the fan of Loudon rock nyc writer Steve Crawford is, but I am still a huge fan.

It had every problem you can imagine, on a set that in song selection alone had moments that Loudon didn’t reach at The Town Hall in 2012 (here), and yet the streaming experience is really disturbing. A close up of Suzzy Roche, reading the liner notes George wrote for a Loudon live album, is too close, she can’t move from the spotlight, and it is both insulated and the exact moment. Crazy and also making a point where no point exists. “My Intellectual Lady” and “Peg Legged Mama” are given robust, folk guitar workouts and Wainwright is an excellent MC with a deep love for his friends, and a way with an intro which had III patiently waiting to nail you dead with “Trying to get sober…”. Suzanne Vega wrote “Marlena On The Wall” for Gerdes back in the day and performs her dumpee track (“Even if I am in love with you, all this to say, what’s it to you?”)  and the set steadies into its remembrance of songs I don’t know at all. If Loudon, over and above loving his closest friend,  wanted to  put Gerdes back in the conversation, he definitely proves the influence but sadly not the genius. On song after song you can’t help feeling that it isn’t as good as we want it to be. Gerdes songs are folk, though now Americana might be a better description, of existentially witty and clever straight up songs of suspended belief. The Spinal Tap guys together or Christopher Guest alone (on a Woody Guthrie song they used to cover where he can’t remember the chord changes), the samey, clever clogsness of Gerdes is indivisible from what his gifts were. This is abundantly clear during the shows highlight, Loudon’s sister Sloan Waingwright’s Gospel acapella take on “I Saw Jesus (She was Black)” almost singlehandedly made the evening worth your time… though I am damned if I can find it anywhere but here.  Always a pleasure to see Richard Thompson with a power finger picked triumph and Terre Roche offers Gerdes single greatest moment; “Steady With The Maestro” from the Roches unspeakably briiliant Keep On Doing. and reminds you of something that isn’t true… “Steady with The Maestro” does a lot to make III’s case.

The 90 minute show doesn’t exactly drag but its needs were so specific it wasn’t necessarily enthralling, more than anyone else here Loudon performed covers as clearly as influential on his career and performs them as fully formed as his beard. It makes you wonder what if Loudon had join the cast of St. Elsewhere and Gerdes had become a full time folkie…